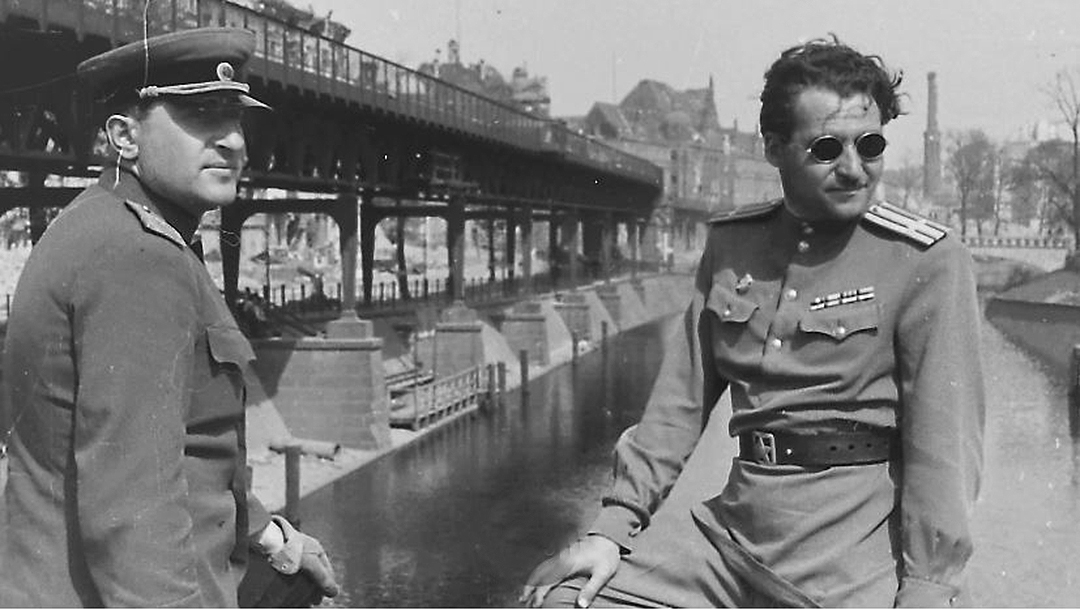 Major-General Matvey Weinrub, left, and writer Konstantin Simonov on the Hallesche-Tor-Brücke Bridge over the Landver Canal in Berlin, May 1945. (From the collection of the Moscow Jewish Museum and Tolerance Center)
Advertisement

(JTA) — Moscow’s Jewish museum is showing previously unseen photographs from the Red Army’s invasion of Berlin during World War II in an exhibit that has been moved online.

The exhibition debuted on Saturday, May 9 — the 75th anniversary of the Soviet Union’s victory over Nazi Germany.

Most Soviet photographs from that period were carefully staged, edited and even manipulated for propaganda purposes. Other photos were destroyed or kept under wraps for decades because of the dangers of disseminating information that did not fit the authorities’ purposes during the Soviet Union.

But the 80-odd works curated by the Moscow Jewish Museum and Tolerance Center, which Russian President Vladimir Putin has visited multiple times since it opened in 2012, include snapshots of battle-hardened soldiers, some with overgrown hair, enjoying the summer sun against the dramatic background of bombed-out Berlin.

The exhibit features works by the likes of prominent Soviet artists such as Ilya Arons and Valery Ginzburg, who were both Jewish.

The decision to curate a photo exhibition ahead of May 9 — a major national holiday in Russia and across the Soviet Union — was made long before the COVID-19 crisis hit, said Liya Chechik, a senior research fellow at the museum, during a videoconference Thursday of the Association of European Jewish Museums.

But the screen-friendly format greatly facilitated the switch online, she said.

“Luckily this is something that can easily be made virtual,” she said.