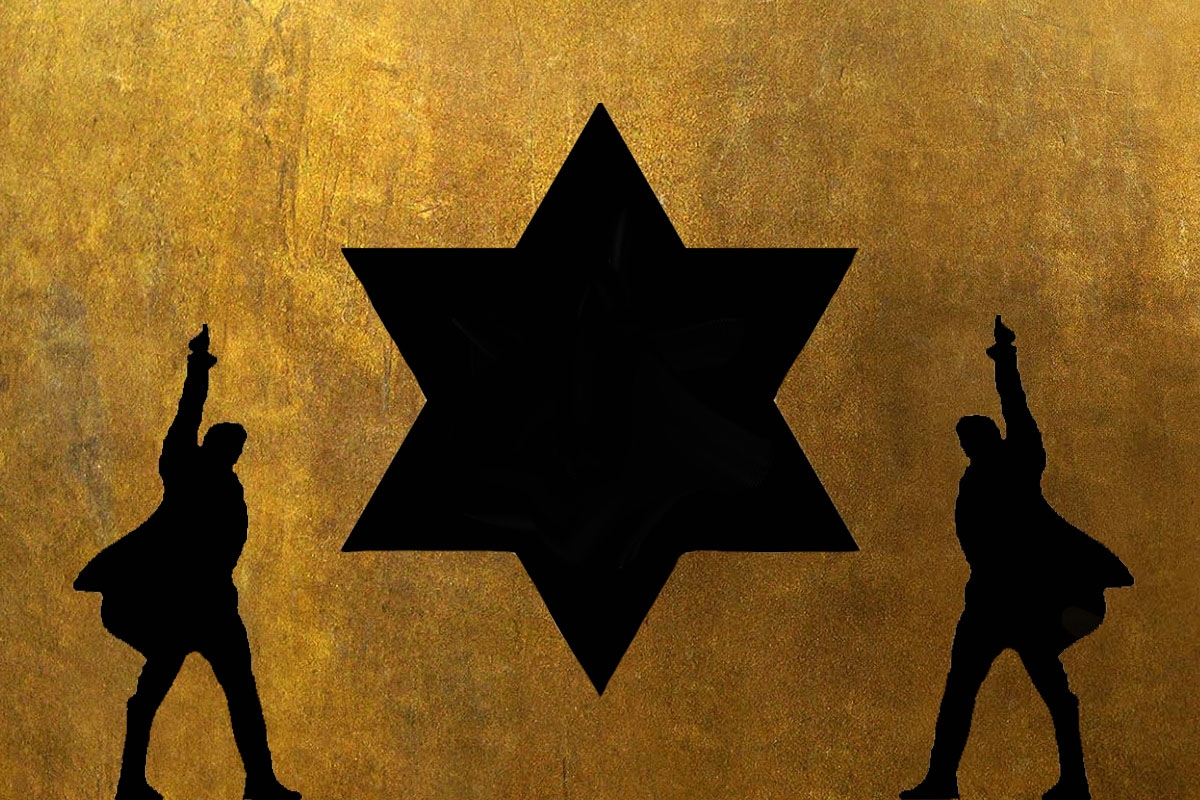 In the ultimate COVID-19 silver lining, the Broadway smash “Hamilton“ will soon be available to stream from the comfort of your quarantine couch. Huzzah!

Originally set to hit theaters on in October 2021, it was an incredible coup by Disney+ to snag rights to Lin-Manuel Miranda’s Tony Award-winning musical. Luckily for everyone forced to self-isolate during the pandemic — and with Broadway theaters shuttered indefinitely — there’s now something to look forward to on July 3 (just in time for America’s birthday, of course).

In honor of this most exciting news delivered at a truly hellacious time, here’s a bunch of Jewish facts about “Hamilton,” the innovative hip-hop musical that tells the tale of the Founding Father on the $10 bill.

1. Is Lin-Manuel Miranda, the creator, Jewish? Nope — but he’s most certainly an honorary Jew, and we have the receipts to prove it. Born in New York City to a Puerto Rican family, the artist — er, composer, lyricist, producer, actor, singer and playwright — grew up with a lot of Jewish friends. While studying at Wesleyan, Miranda, 40,  joined a Jewish a cappella group, the Mazel Tones, and sung a popular rendition of “Hinei Ba HaShalom.” He also later worked as a bar mitzvah dancer to pay his rent. Oh, to be the bar mitzvah boy!

But that’s not all, folks: In 2009, Yeshiva University gave Miranda an honorary degree, prompting him to tweet, “The day I became a Jewish doctor!” A year later, at his wedding, the oh-so romantic newlywed performed a surprise rendition of “To Life!” from “Fiddler on the Roof.” Needless to say, his new wife, Vanessa Nadal, was overjoyed. As for us? Listening to Miranda sing in Hebrew had us feeling verklempt —  so you can imagine how we felt when he tweeted in Hebrew in March, shortly after coronavirus hit the U.S.

2. Oy, we almost forgot about Miranda’s most recent, super-Jewish act: publicly thanking a generous bat mitzvah girl. In April, the Broadway star reached out to “Hamilton” super fan Elliana Zucker, who is making face masks as part of her mitzvah project. After the bat mitzvah’s mom reached out to Miranda, Elliana received a handwritten letter from “the desk of Lin-Manuel Miranda.”

“As we all do our part by staying home you’ve chosen to take on a little more,” the composer wrote. “May the music of Hamilton continue to accompany you in your honorable endeavor.”

Her response? “It kind of reminds me of sleepaway camp when you don’t have a phone and you get a letter,” she told the Miami Herald. “It’s old school.”

3. OK, so Miranda isn’t technically Jewish. But what about Alexander Hamilton, the musical’s titular role Miranda plays? Well, it’s complicated. Hamilton grew up in the Caribbean, and some scholars believe that the Founding Father’s mother, Rachel Faucette, might have been Jewish. In any event, the Anglican Church banned young Hamilton from its school because he was born out of wedlock, so instead he studied at a Jewish day school at a synagogue. He learned Hebrew there and allegedly told his son that he learned to recite the Ten Commandments.

“Rarely as he alluded to his personal history, he mentioned at the school of a Jewess, when so small that he was placed standing by her side upon a table,” Hamilton’s son recalled.

4. If Hamilton wasn’t Jewish, he was, at the very least, an advocate for the Jewish people. During a heated debate in a legal case, Hamilton is recorded saying: “Why distrust the evidence of the Jews? Discredit them and you will destroy the Christian religion … Were not the [Jews] witness of that pure and holy, happy and heaven-approved faith, converts to that faith?”

5. It was Jewish historian Ron Chernow’s 2004 book “Alexander Hamilton” that inspired Miranda to create a rap musical about the Founding Father. While reading the Pulitzer Prize winner’s book on vacation, Miranda got the idea to retell the story in a modern way. The actor approached Chernow and the rest, well, is history!

6. Aside from Jewish advisor Chernow, the Broadway cast of “Hamilton” has tons of Jews, like Jewish director Thomas Kail, who actually met Miranda at Wesleyan, their alma mater.

7. If you’ve seen “Hamilton,” you’ll know that in the musical numbers, singing was only half of the marvel. You can thank Jewish associate choreographer Stephanie Crain Klemons for the marvelous dance moves.

“I’ve felt connected through “Hamilton” a lot of other recent media to my Jewish roots,” Klemons told the Crescent City Jewish News. “As our Holocaust generation dwindles, the passing down of stories and traditions becomes both increasingly important and increasingly difficult. In “Hamilton” especially, there’s a resurgence of the desire to know where you come from and the path your immediate ancestors experienced.”

8. Jewish and African-American actor Daveed Diggs, who starred in the original Broadway cast as both Marquis de Lafayette and Thomas Jefferson, originally thought a rap musical about Alexander Hamilton was a “terrible idea.” He went on to win a Tony Award for his performance thanks, in part, to his “really, really fast” rapping skills.

“Hamilton’s story reflects the long line of Jewish immigrants who came to America’s shores seeking opportunities to better their lives,” Seller told Jewish News. “He gets on a boat to New York to further his education, prospects and opportunities, and we see a direct line to the Jews of Eastern Europe who came to the United States for the same reason.”

10. Jewish mom Mandy Gonzalez was cast as Angelica Schuyler in the off-Broadway, and Broadway production. Gonzalez, who recently announced her battle with breast cancer, says her bubbe, the “Yiddish Queen of St. Louis,” gave her her “love of music.” Judaism and “having a faith in community” is incredibly important for young adults, Gonzalez said, who “strongly identifies” with Judaism and its “beauty and the culture.”

11. The Jewish members of the Broadway cast apparently even had a nickname for themselves: the “Hamil-Jews.” In addition to those we’ve already mentioned, this also includes set designer David Korins, ensemble member Seth Stewart and sound designer Nevin Steinberg.

Between shows, the Hamil-Jews celebrated Jewish holidays! Klemons said on Yom Kippur, those who chose to fast were supported by the rest of the Jewish friend group. “We did a little apple/honey Rosh Hashanah prayer,” Klemons said. ‘We did a Passover matzah exchange. Everyone makes a dish and we help each other out.”

12. In 2017, Miranda created Hamildrops, a project in which he released a new tracks inspired by “Hamilton,” in collaboration with featured artists. For the fourth mashup, Miranda teamed up with Jewish actor Ben Platt for a gorgeous duet of  “Story of Tonight” from “Hamilton” and “You Will Be Found” from “Dear Evan Hansen.”

13. Since everybody loves “Hamilton,”and everybody loves Jewish holiday parody videos, perhaps it’s a bit of a no-brainer that there are a bunch of great Jewish a cappella versions of “Hamilton” songs, including this Hanukkah parody from the Maccabeats and this one from Six13. Enjoy!