A black pastor organized an interfaith rally in Chicago to protest systemic racism. He and 5 rabbis share their experiences. 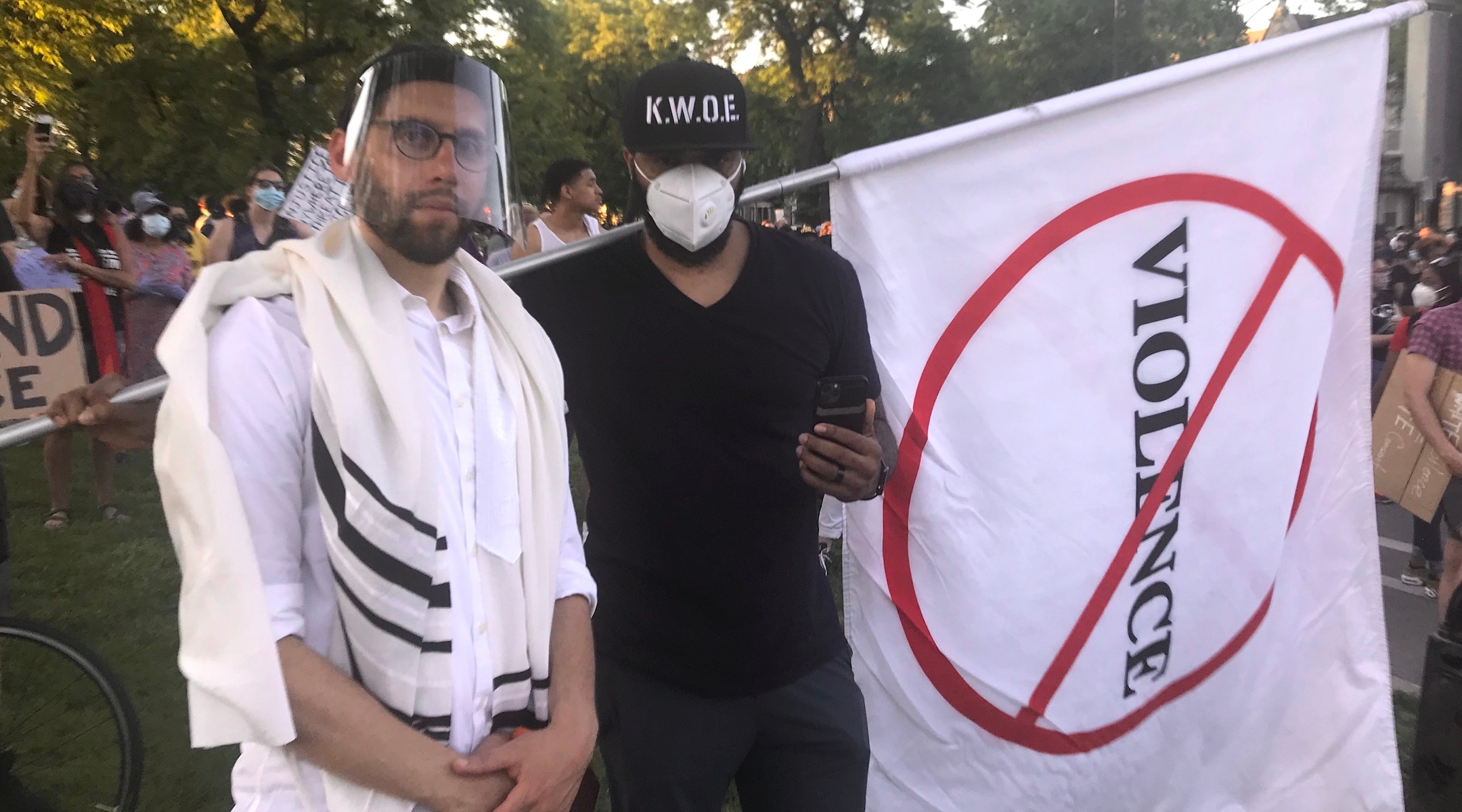 Rabbi Ari Hart, wearing a prayer shawl and face shield, stands with activist and entertainer Kareem "K.W.O.E." Wells at the interfaith demonstration in memory of George Floyd and protesting systemic racism in Chicago on June 2, 2020. (Courtesy of Hart)
Advertisement

CHICAGO (JTA) — On Tuesday night, a contingent of Jews from the Chicago area joined thousands of people in an interfaith demonstration in the African-American neighborhood of Bronzeville to protest the killing of George Floyd and systemic racism in the United States.

The march was organized by Bright Star Church, whose pastor, Chris Harris, has worked with local synagogues for years to build relationships between African-Americans and Jews. The Jewish Telegraphic Agency spoke with Harris, as well as five rabbis who attended the demonstration, about what the protest felt like and what they believe Jews should do in this moment.

Pastor Chris Harris: As a black man, I fear for my life, my sons fears for their lives, my grandson, I fear for his life. And the question becomes, when does it stop. So, many people are worried about the looting but many people lose sight of what caused that. And you’re asking black people to deal with a [COVID-19] pandemic that disproportionately affects us at the same time that we have to deal with an epidemic of racism that produces and protects police brutality. …

Bronzeville represents black communities everywhere, all over this racist country, but we also marched down Dr. Martin Luther King Drive, who the Jewish community knows and feels is a champion … And we marched down and we had the largest march around this kind of effort in the history of Chicago, and it was peaceful, no incidents whatsoever. 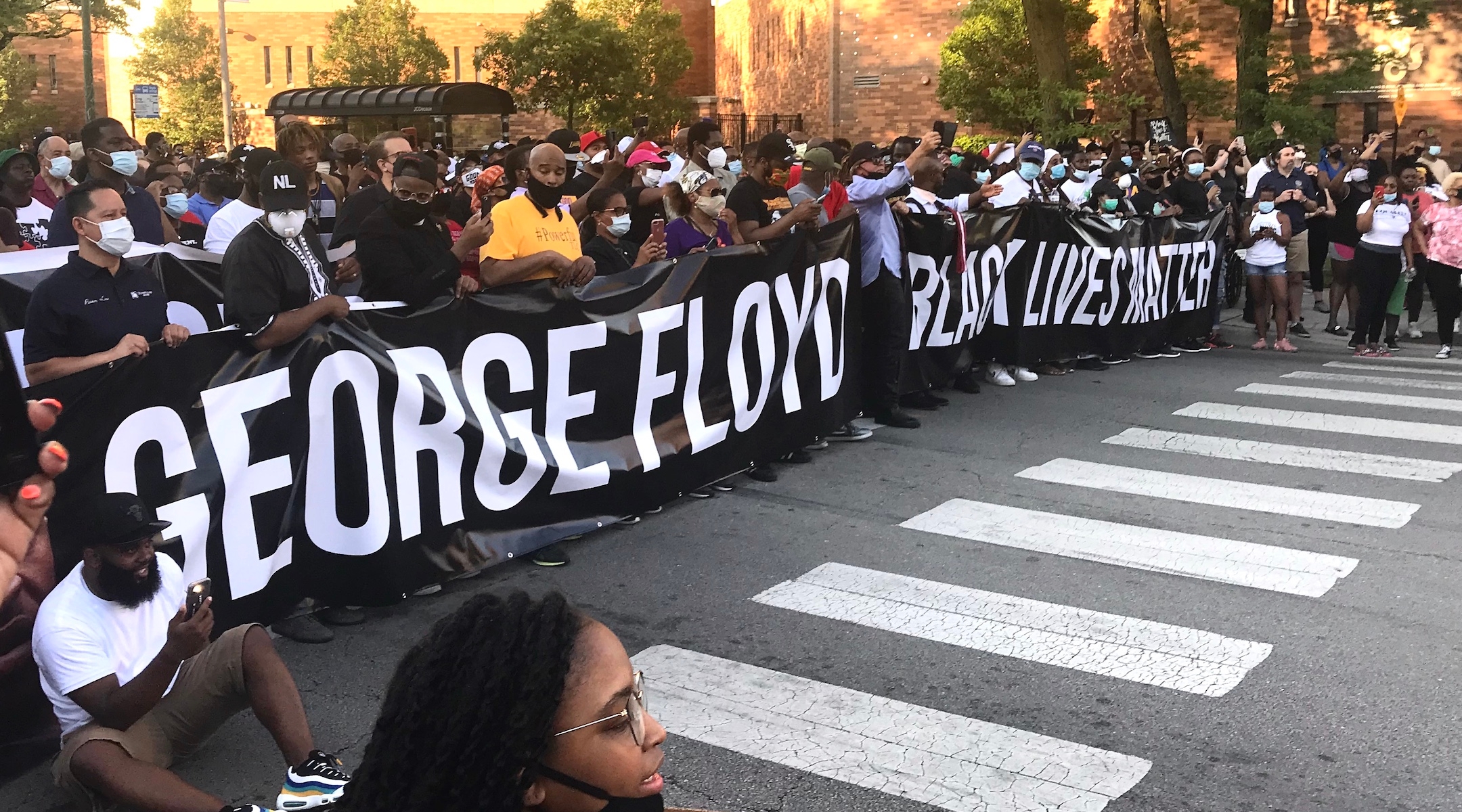 Marchers at the front of the interfaith demonstration in memory of George Floyd and protesting systemic racism in Chicago on June 2, 2020. (Courtesy of Ari Hart)

Rabbi Lauren Henderson, Mishkan Chicago (independent): It was beautiful. The vibe was just loving and intentional and peaceful and relational. Ninety-nine percent of people were wearing masks.

Social distancing was hard … The call was really one of dismantling systemic racism and really trying to center Black Lives Matter, and also communicate that Black Lives Matter means lifting up all people, all faiths, all marginalized groups.

Rabbi David Minkus, Congregation Rodfei Zedek (Conservative): The most powerful aspect of the rally was what happened before and after. A fellow community member and I rode our bikes from Hyde Park [to the rally], and we rode through neighborhoods and communities that are five, 10, 15 minutes from us and we never touch. And the rally ended in … a park less than a mile from our homes and we had never been there. So I was actually more impacted by the exposure I had to how so many other people live and to sights that I’ve never seen.

Rabbi Anna Levin Rosen, University of Chicago Hillel: While a political purpose of the march was to demand police accountability, a spiritual purpose of our gathering was to honor the memory of the victims of police brutality. Last night, we brought meaning to the words “Black Lives Matter” every time we shouted the name “George Floyd.” Speaking his name helped me gained moral courage to confront my own aversive racism and speak out against a system rooted in oppression. 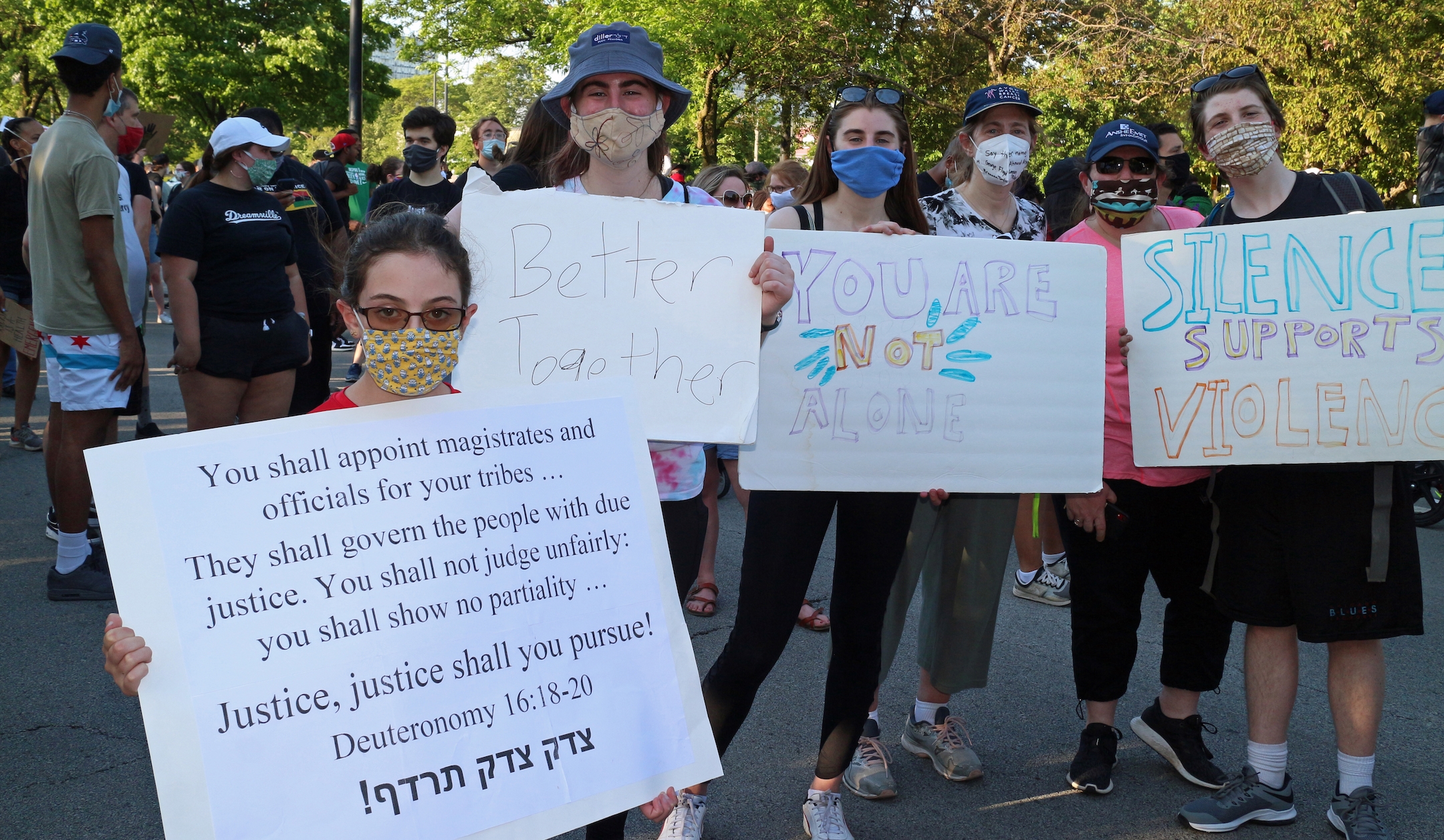 Demonstrators hold up signs at the protest. (Courtesy of Anshe Emet)

What is the role of white Jews in responding to this moment?

Rabbi Michael Siegel, Anshe Emet Synagogue (Conservative): I think Jews often want to speak out, they want to respond, but they’re not exactly sure how to go about that. And here we have the kind of relationship in Chicago … to create that kind of environment. …

I think the role of every Jew and certainly Jewish leaders emanates from the Torah. It’s an obligation for us to be involved in creating a just society, to be the voice of those who are being subjugated in our society.

Levin Rosen: This is a moment for us to listen to the stories and learn the history of systemic racism in our country and recognize the pervasiveness of Black oppression as part of our stories as American Jews. We need to carve recognition of Black suffering into our collective memory in order to truly bear witness.

Henderson: I saw my role last night as being a witness… I found myself really practicing listening as much as I could, practicing silence as much as I could. When everyone kneeled to take a knee, I kneeled to take a knee, I felt that my role in this moment was to be part of a much larger movement and to physically demonstrate my solidarity with my body.

Hart: I really believe in relationships. We need to be building bridges and just connecting on an advocacy level, but just as importantly on a relational level. Chicago, for example, is such a segregated city, it’s so physically divided, and that perpetuates a lot of these problems.

[Note: Chicago’s South and West sides, which are now largely populated by people of color, were home in past decades to large concentrations of Eastern European Jewish immigrants.] 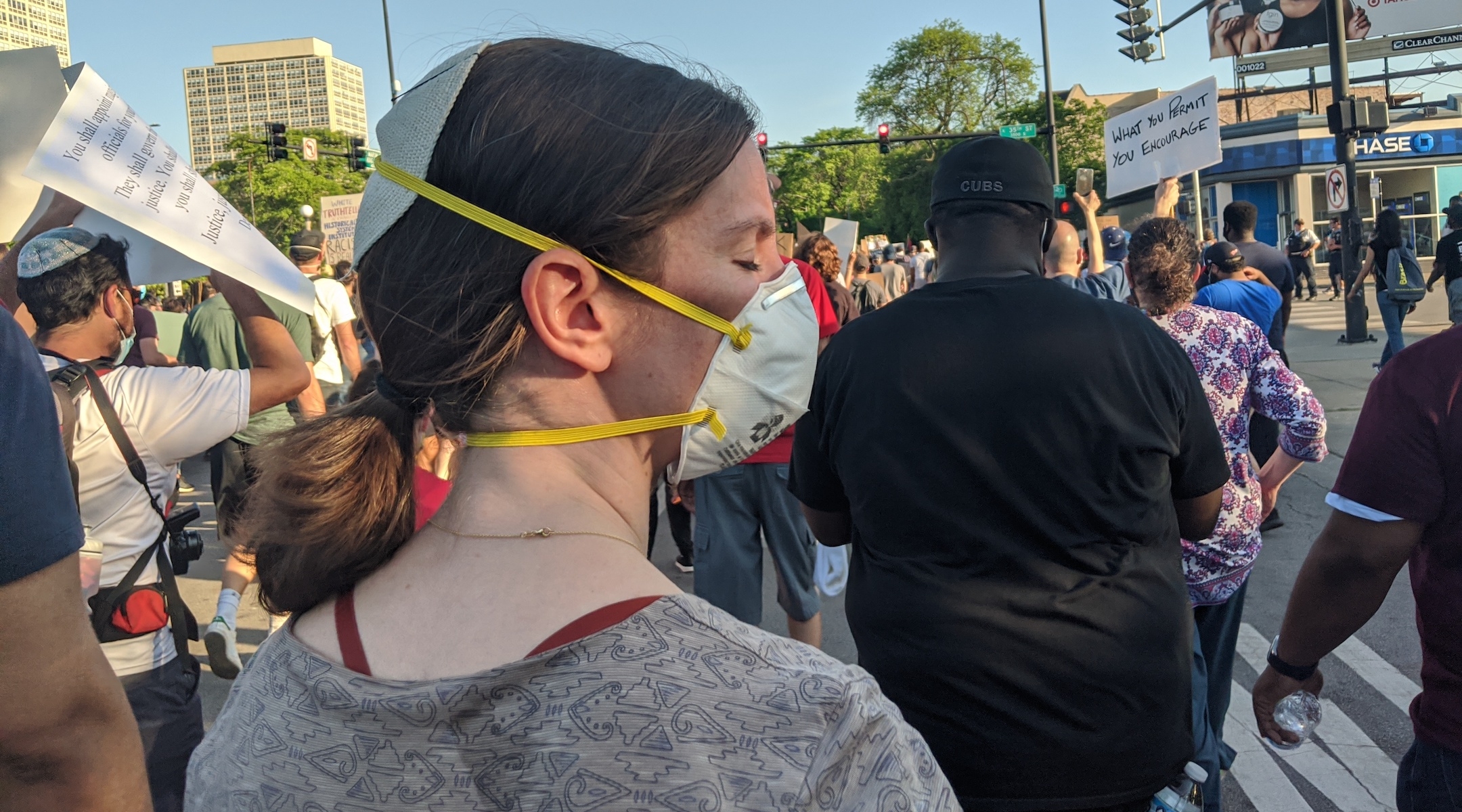 Rabbi Lauren Henderson attends the interfaith demonstration to protest the death of George Floyd in Chicago on June 2, 2020. (Courtesy of Henderson)

How did fears of spreading the COVID-19 pandemic affect your participation in the protest?

Harris: We asked people to wear masks and we constantly, over the loudspeaker, encouraged social distancing. It was a challenge but just think about the power of that message: People were willing to risk their lives in a pandemic because George Floyd lost his life due to racism.

Minkus: I think a lot of the people who didn’t come and wrote to me that I was representing them had real and genuine concerns about being exposed to COVID and feeling like they were in an age bracket or had health criteria where it wasn’t safe for them, and that’s legitimate. But for me, not being immunocompromised, being generally healthy and young, allowing my health-related fears to overwhelm my instinct to go, it would feel like I was executing a privilege.

Henderson: The morning after, it was a very intense experience to be in such a large crowd, to be in such close proximity after months of not, and it’s emotionally kind of hard. So I do have a heightened sense of anxiety about, OK, what will be the data on COVID outbreaks two weeks from now, how will this affect the spread of the disease, and feeling wary of that. 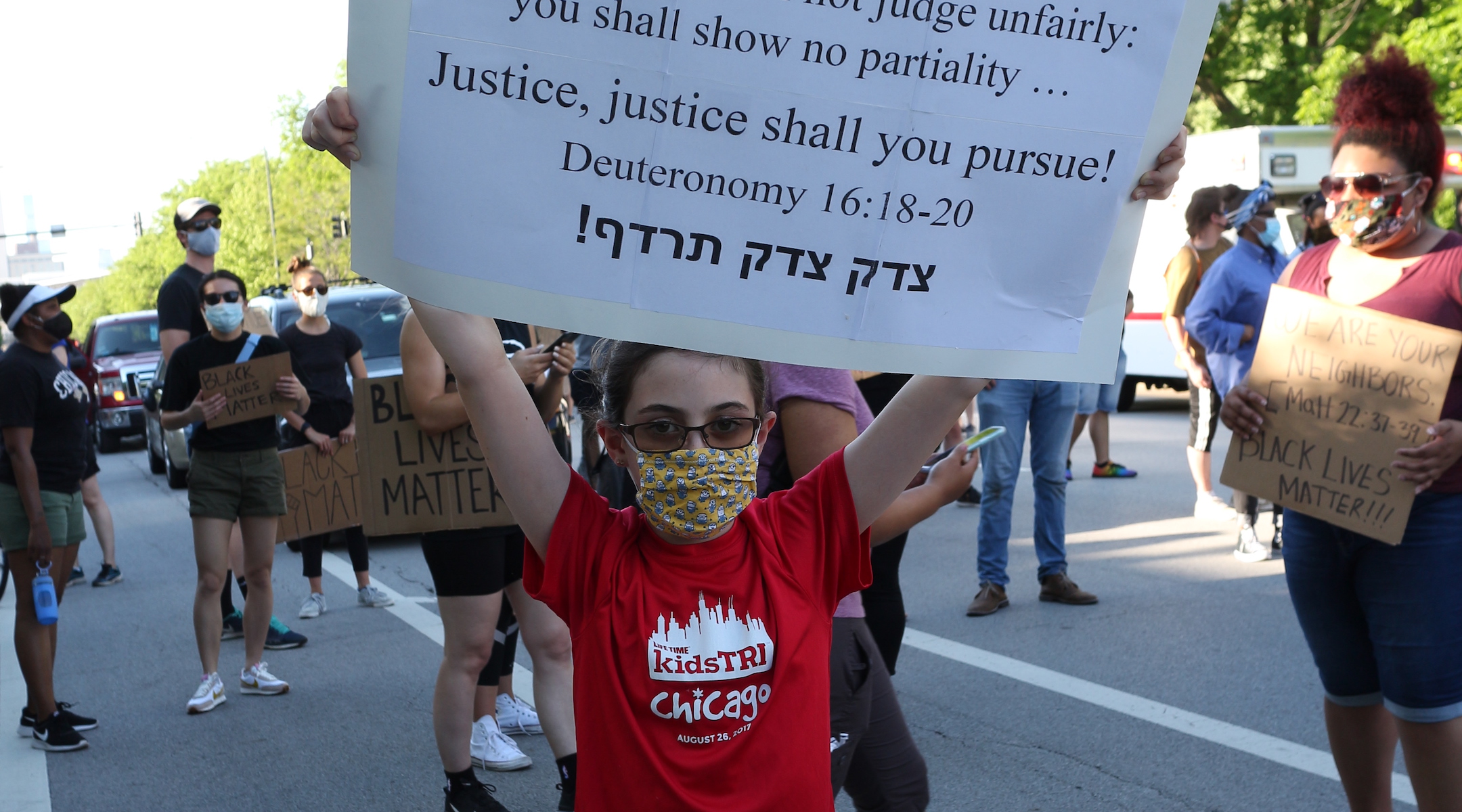 A Jewish demonstrator holds up a sign quoting the Torah in Hebrew. (Courtesy of Anshe Emet)

What are your next steps following this demonstration?

The more people in the Jewish community and other communities don’t speak out against that anger, you’re going to have far more violence because silence is complicity.

Henderson: One of the things we were saying was, OK, how can this be a moment to push ourselves in a safe way to patronize black businesses in Chicago, to order from black-owned bookstores and shops? This was a great way to break the seal on my own mostly white bubble.

Hart: [There’s] a food crisis potentially brewing on the South Side as the grocery stores are looted and there’s no food, there’s no places selling food for miles and miles. So on Sunday we’re doing food and medicine distribution.

The protest is important, but it’s what comes next. It’s engagement and relationships.