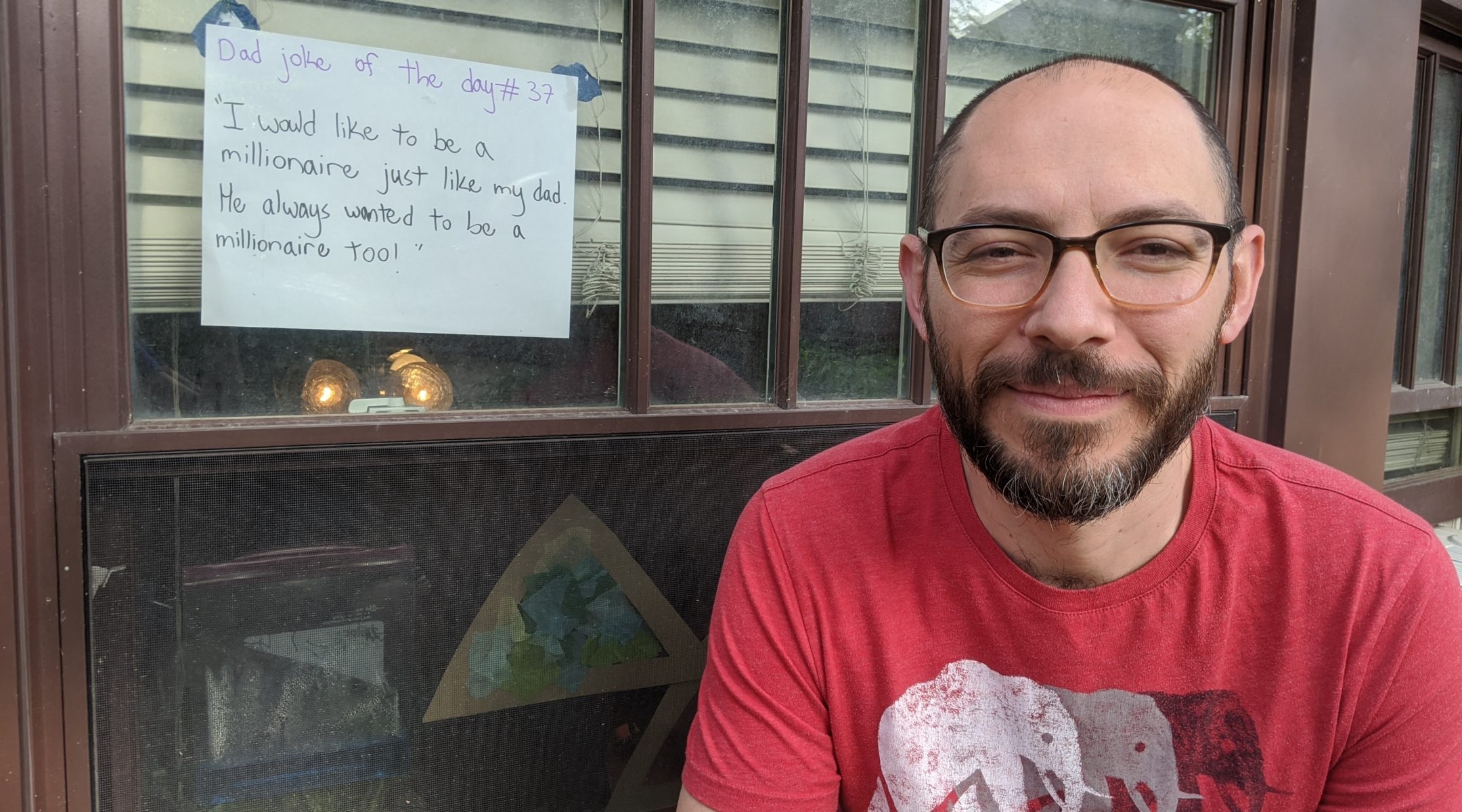 Yair Bernstein has been posted jokes for his Chicago neighbors throughout the pandemic quarantine. (Courtesy of Bernstein)
Advertisement

The previous night, his city of Chicago and many others across the United States were convulsed by demonstrations against police brutality that in places lapsed into looting and clashes between police and protesters. It was hard for Bernstein to see a role for the task he took on shortly after he began staying home because of the coronavirus pandemic: posting daily “dad jokes” in the window of his basement apartment.

“I’m not a funny person,” said Bernstein, an Israeli who moved to Chicago five years ago to teach Hebrew and Judaic studies at Bernard Zell Anshe Emet Day School. Still, his jokes — which he finds online, including on an app called, quite literally, Dad Jokes — have drawn the attention of neighbors and even the Chicago Tribune.

We chatted with the Jerusalem native and father of two young children about what inspired his project, his favorite jokes and how humor can help us in trying times. This interview has been edited for length and clarity.

JTA: When did you get the idea for your project, and what has the reaction been?

Bernstein: The idea came from a friend who was doing it in a different neighborhood. She was doing it on her lawn. I realized I could do it in my window — I don’t have a lawn, unfortunately. I started posting them one day, and I decided to number them — I didn’t know how long I’m going to do it for, but it became a habit.

I didn’t know that people were reading them. But slowly it was clear that people were enjoying them — they were passing by, stopping, laughing and taking pictures. That made me realize that it was important to people, so I’ve continued doing it.

We’re at 37 today. I knew that I wanted to collect and post them all over the school when we go back to school. But I didn’t know I would have so many — I don’t know if they’re all going to fit.

Jews are famously funny. What’s Jewish about this project for you?

Being an educator in a Jewish community and a Jewish person, I grew up looking to live a more meaningful life and trying to make the world a better place. The phrase tikkun olam, American Jews really believe in it. I think this fits into that. I can only do what I can do. In the state that I have in my life, I can’t give big [donations], but I can make some people feel better — I think I can do that.

This week, laughter feels farther away. How are you thinking about your project now?

Today was the first time I thought I didn’t want to do it. But then I thought to myself this is exactly the reason people want to see it. Things are not so good now, and people are looking for something different, something to make them feel a little better.

You teach Hebrew and Judaic studies. What has that been like online, and how do you use humor in the classroom?

Our school started planning and thinking about it a while in advance, so we put a plan in place early to transition our content. We got used to it. It kind of works. It’s not the experience that you want to give students — education is something that really needs face-to-face interaction — but knowledge was shared, Hebrew was learned, relationships were created, just not to the degree that they would be in regular school days.

I’m not a funny person, but I recognize funny things. I respond well to sarcasm, which is good for working with teenagers. It’s not like I would come into the classroom with a joke ready, but students know to expect a fun time with me. It’s important as an educator.

Have you considered going back to Israel over the last couple of difficult months?

My wife and I came to work as shlichim [emissaries] for three years, which we then extended to five. And then at the end of five we decided we have more to do here. The World Zionist Organization was not happy: We were supposed to bring modern Hebrew and Jewish studies to a school here and then come back home. We are still planning to do that at some point — we just don’t know when.

It’s going to be OK. We’ve been through harder things, even though it doesn’t feel like that.

What’s been your favorite joke from this project?

I liked the one from today. But also this one: Unfortunately since the quarantine, I can only tell inside jokes.