Pluralism is a Jewish value. But pretending all ideas are equal destroys democracy. 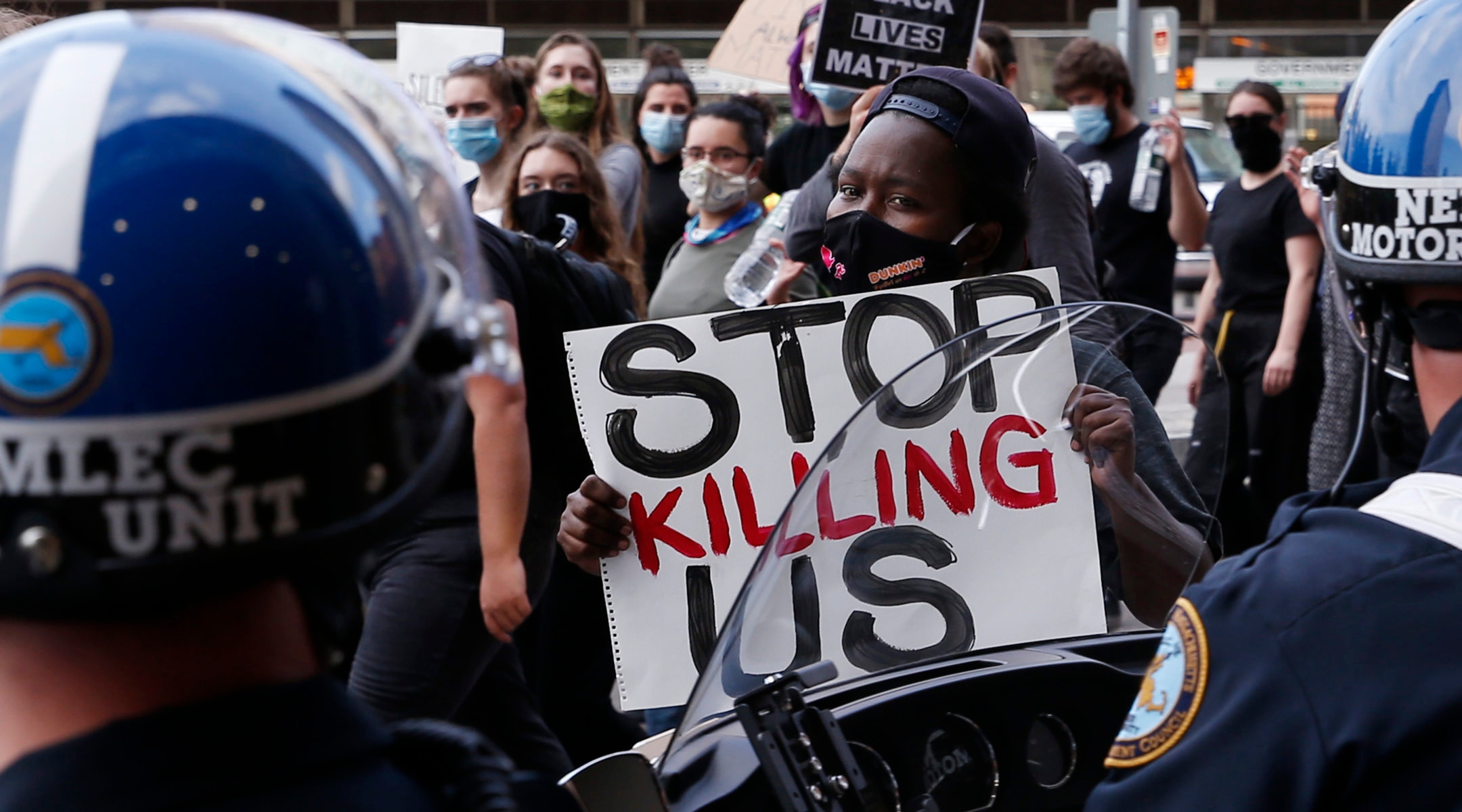 A protester walks past a police motorcycle during a peaceful demonstration in Boston to honor the life of George Floyd and other black Americans killed by police, June 3, 2020. (Jessica Rinaldi/The Boston Globe via Getty Images)
Advertisement

NEW YORK (JTA) — It was only a matter of time before we would hear a Jewish defense of The New York Times’ decision to run an opinion piece in favor of unleashing American troops against Americans on the grounds that publishing the piece exemplified the Jewish tradition of spirited debate.

This argument takes the ideal of rabbinic pluralism, weds it awkwardly to ideas of freedom of expression and the stereotype that Jews are a quarrelsome people, and suggests that not airing Sen. Tom Cotton’s essay “augurs the end of argument” — and worse, that to oppose this position is to oppose the pluralism at the heart of the rabbinic tradition.

This argument is wrong about pluralism and wrong about the rabbinic tradition. And if we value the rabbinic understanding of pluralism, we must defend it against misuses — especially those with violent consequences.

The central problem with the argument that “all perspectives should get equal airtime” is that it strips true pluralism of its ability to reform and transform societies. True pluralism is not moral relativism: It is rooted in the belief that truth itself includes a diversity of viewpoints, and it translates into the commitment to build societies of mutual respect. Pluralism is a belief system in which we make room for the opinions and whole selves of others, and a tool to build a society that is improved by the presence of difference. E pluribus unum, if you will.

The Talmudic rabbis, without question, believed in spirited debate inside their academies. The earliest rabbinic canonical document, the Mishnah, is extraordinary — perhaps the first in history to preserve debate on issues of legal import without reconciling such debates. The Talmud, which dramatically expands the canon in the depth and description of rabbinic debate, famously suggests that a divine voice interrupted a ferocious argument among rabbis to declare that “these and these are the words of a living God!” And this is where the citation often ends, as though it constitutes proof that the point of debate is debate itself.

But the rabbinic tradition does not conflate ends and means, nor does it believe that the content of these debates is so irrelevant that all opinions matter. In the case of this famous passage, the Talmud goes on to say that the law follows the school of Hillel. To not cite the resolution is to value rabbinic debate and ignore rabbinic normativity. It is hard to imagine a deeper misunderstanding of the rabbinic tradition.

Societies – those of the rabbis and ours – need basic, shared rubrics of legitimacy as the vessels to hold essential debates. The Talmud codifies the best and most essential versions of these debates because they create the conditions for the advancement of the best versions of normative opinions and the preservation of the best versions of the rejected alternatives. Even in the most pluralistic societies and communities, there are limits that are essential for the dignity of the discourse of pluralism itself.

The rabbinic academies believed that engaging in productive debate was a way of building a moral society. The rabbinic idea is that Jewish law and matters of theology matter, in the deepest way possible, and that cultivating debate on such issues creates better societal outcomes. To do that well is to be willing to weed out the worst arguments in the editing process, not to allow them to stay in print for perpetuity.

And let’s not forget the theological implications of rabbinic pluralism, embedded in the citation that human words on both sides are also divine words. To believe that God contains multitudes of ideas — even contradictory ones, argued passionately by individuals who cannot countenance agreement with their opponents — is to engender humility in humans and an appreciation of God’s infinitude.

But it is not, in turn, to force us to claim at all ideas are equally Godly. To attribute one’s own ideas to God is to commit idolatry in the worship of the self. It is a source of shame in Jewish history that words of Torah were once used in America to justify slave-owning, and it should be a source of shame now to see words of Torah used to justify a war on the American people.

American society should have rubrics of legitimacy as well for its public debates. Such rubrics help create the condition for pluralism and ethical governance to go hand in hand. The political theorist Michael Walzer writes that pluralism and democracy “are two critically important American ideas: first, that men and women of different religions, ethnicities, and races can live together in a single commonwealth; and second, that they can govern themselves democratically, arguing and deciding as free and equal citizens.”

These two ideas are not just compatible, they are necessary for one another. A robust public square makes it possible for our differences to remain intact; the democratic process then coheres us into majorities. And real democracy requires of us to know the limits of majority rule lest it turn into tyranny. That careful coalescence between pluralism and democracy requires of us a modesty in our debates against the very tyrannical ideas that can upset the balance.

How then are we to encourage the spiritual vastness of pluralism, but to make sure that it does not destroy democracy?

In American history, our best guide on a politically viable theological pluralism is Abraham Lincoln. In his second inaugural address, Lincoln channeled the rabbinic ethos of pluralism by saying charitably about both his soldiers and those of the Confederacy that “both read the same Bible, and pray to the same God; and each invokes His aid against the other … The prayers of both could not be answered; that of neither has been answered fully. The Almighty has His own purposes.”

In these words, Lincoln exemplified the epistemological humility of not trying to speak on behalf of God. The same God can be beseeched by people seeking polar opposite moral and political outcomes. I do not begrudge the faith of people who I believe are perpetrators of terrible injustices.

But Lincoln did not end his inaugural address and then yield his place on the stage for the Confederate president to also stake a claim. Lincoln did not believe that the marketplace of ideas meant that both sides deserved the same airing from his place of political authority or moral suasion. His entire inaugural address, with epistemological pluralism at its core, was a vehicle to motivate the Union in pursuit of its agenda of winning the war.

The New York Times opinion section is not a neutral record of different opinions. It is a site of power. Cotton’s views may find following among more Americans than I am comfortable with. But it is fair play, and in the service of a pluralistic and democratic society, to not grant him every imaginable venue to air them.

It is not a violation of pluralism to hold a line, while Americans are already dying in the street, against the use of military force against them. To attach The New York Times’ decision to the legacy of rabbinic pluralism and the majesty of God is to desecrate them both.