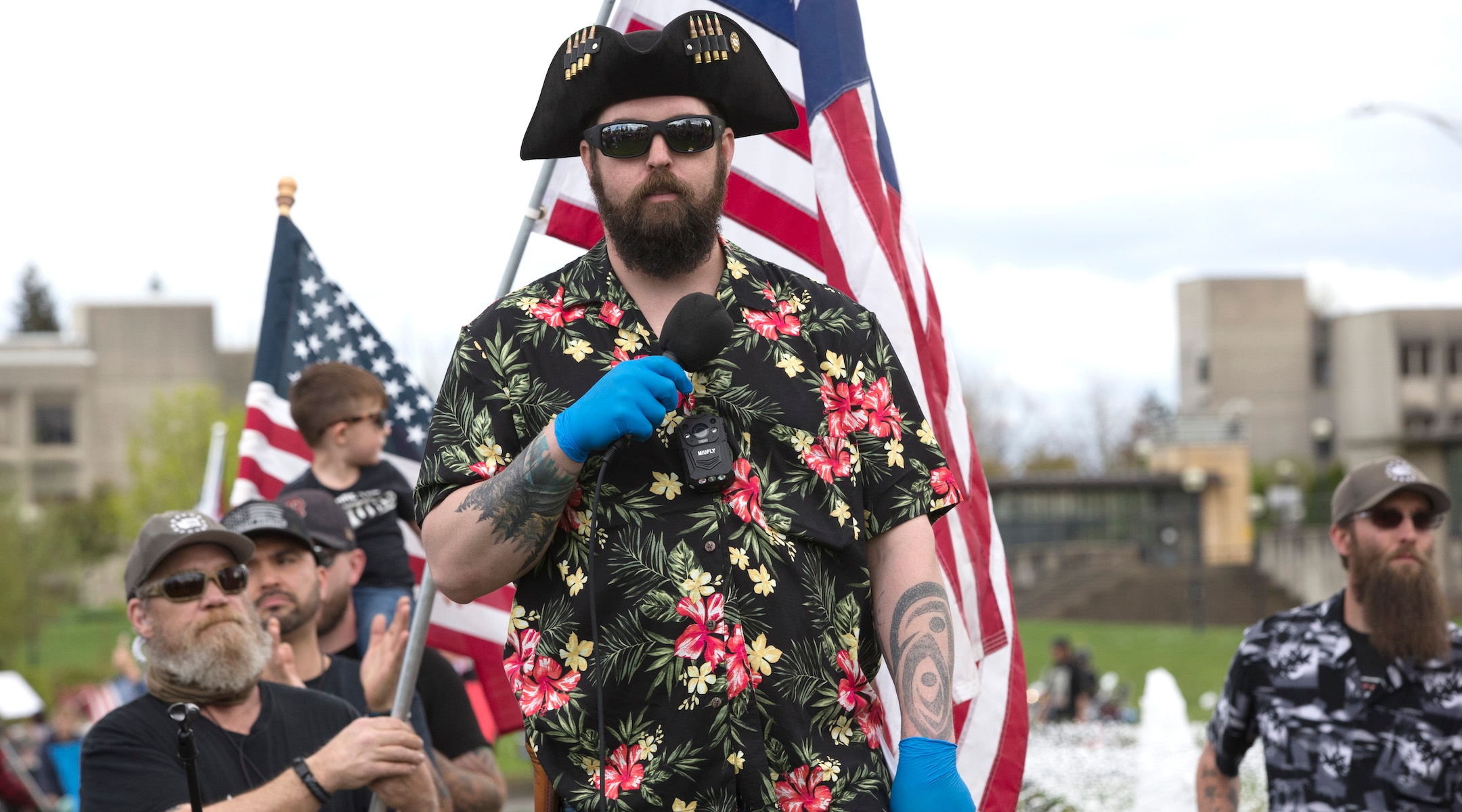 Matt Marshall of the right-wing group Washington State Three Percent (3%), and clad in the Boogaloo uniform of a Hawaiian shirt, speaks at a 'Hazardous Liberty! Defend the Constitution!' rally to protest the stay-at-home order, at the Capitol building in Olympia, Washington on April 19, 2020. (Karen Ducey/Getty Images)
Advertisement

(JTA) — There are men showing up to the George Floyd protests in body armor and Hawaiian shirts and they want to start a civil war. They call themselves the Boogaloo Bois.

This isn’t a joke, but a very real network of anti-government extremists who want to leverage the protests to incite a wider uprising against police, the army and the state. Last week, three of them were arrested by the FBI for conspiracy to destroy federal and private property.

The arrests are the most visible example so far of the Boogaloo network, whose armed adherents yearn for a second civil war between ordinary Americans and a federal government they consider oppressive.

But there’s a twist: While the figure of a government-hating, gun-loving, war-provoking white male extremist is often associated with white supremacy (and anti-Semitism), the Boogaloo Bois are mostly not that. Researchers say white supremacists are a relatively small part of the Boogaloo network, and an article from the Middlebury Institute says “many [Boogaloo] Facebook groups make a point of disavowing racism and National Socialists.”

But while many Boogaloo Bois may dislike white supremacists, some white supremacist activists definitely like them. In particular, so-called “accelerationists,” who want to create the conditions for a race war in the United States, have employed language and iconography associated with the Boogaloo Bois. The Anti-Defamation League found that one Boogaloo t-shirt being sold online features the picture of the gunman who committed the synagogue shooting in Poway, California last year.

According to this line of thought, white supremacists are “unlikely to get national socialism by trying to convince people to join a movement. They’re more likely to get it by creating huge chaos and then sort of swooping in from behind,” Sunshine said.

The idea of the Boogaloo was born on 4chan, an internet message board popular with extremists. The network takes its name from a 1980s movie called “Breakin’ 2: Electric Boogaloo.” Extremists who joke about a second civil war sometimes call it “Civil War 2: Electric Boogaloo,” since shortened to “Boogaloo.”

Sympathizers sometimes use like-sounding terms like “Big Igloo” or “Big Luau.” That’s why they’ve adopted Hawaiian shirts as their uniform, and why flags and other paraphernalia disseminated by Boogaloo Bois feature pictures of an igloo.

Boogaloo Bois started getting attention earlier this year during gun rights protests, and then again during protests over the lockdown orders aimed at containing the spread of the coronavirus. The demonstrations over the recent killing of George Floyd at the hands of Minneapolis police gave the group another public platform.

In raw numbers, the network does not seem to be large and according to Alex Friedfeld, an investigator with the ADL, not well organized. But they appear to be growing fast. According to the investigative site Bellingcat, the Facebook group Big Igloo Bois had 30,637 followers on May 27. Eight days later, it was up to 34,163. A channel on the messaging app Telegram called “Boogaloo: How to Survive” had 1,700 members as of November 2019, according to the ADL.

“It’s a very loose, decentralized network,” said Friedfeld. “This is such a new thing that it’s getting called the ‘Boogaloo movement,’ and it’s not quite there as being a coalesced thing. It’s still in the early phases of it, but we’re starting to see it coalesce.”

Wednesday’s arrest was a reminder that the group isn’t just a bunch of people ranting online. The three suspects all had military experience and were on their way to a protest and armed with molotov cocktails when they were put in handcuffs. The men had also discussed bombing a power substation as well as a structure on federal land, according to the complaint filed by Nevada’s U.S. attorney.

In response to the indictment, a post on the Big Igloo Bois Facebook group read, “Don’t be that jackass making explosives in plain sight while also discussing the intricacies of your felony with your newest fedbuddy. Those morons just set back the hard work of a lot of people trying to fix our PR issues.”

Boogaloo Bois who have shown up at protests against police brutality are often sympathetic with the Black Lives Matter movement because the Boogaloo extremists hate the police.

But white supremacist activity has been uncovered during some of the protests during the past two weeks. Members of the white nationalist group VDARE posed as reporters for the publication Vice and tried to get antiracist demonstrators to publicly identify themselves, according to the Southern Poverty Law Center. NBC reported that a Twitter account posing as part of the anti-fascist Antifa network was actually run by a white nationalist group called the American Identity Movement. On Tuesday, Facebook suspended white nationalist accounts connected to two hate groups, according to The New York Times.

Most of the Boogaloo Bois may not share those groups’ ideologies. But Friedfeld said they are becoming more active in pursuit of an anti-government uprising — and more willing to show up in person to already tense situations.

“It’s just providing the ingredients for a catastrophe,” he said. “This is an online movement, but we’re seeing it increasingly manifest in the real world. Six months ago you didn’t see Boogaloo people operating in public and now all of a sudden it’s pretty common at a protest to see somebody with a Hawaiian shirt walking around.”