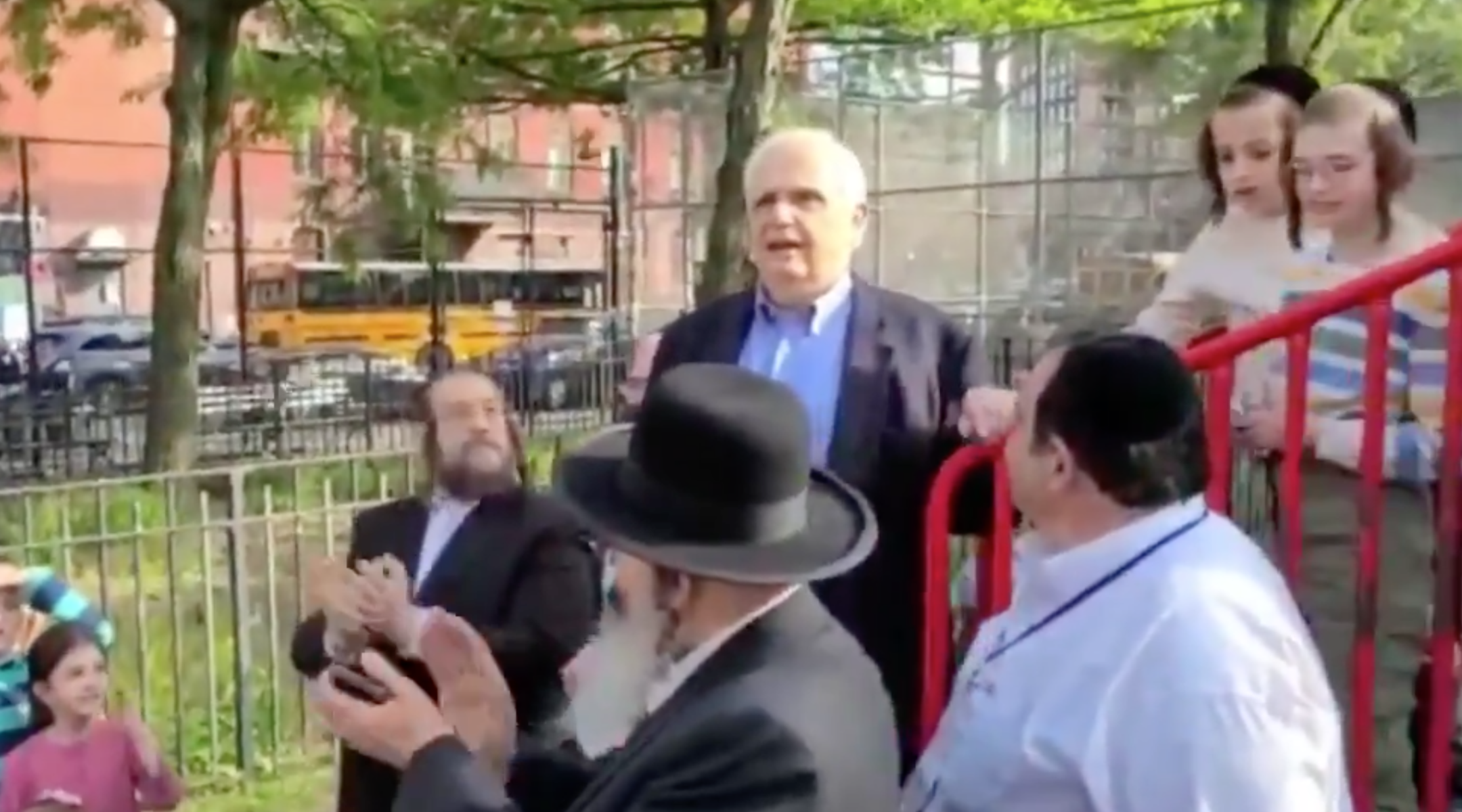 (JTA) – They protested the mayor’s decision to keep the parks closed on Sunday. By Monday, they vowed to cut the chains of the park gates themselves if Mayor Bill de Blasio didn’t accede to their requests.

In a tweet Monday evening, New York State Sen. Simcha Felder said he and two other Orthodox lawmakers, City Councilman Kalman Yeger and state Assemblyman Simcha Eichenstein, would open the parks themselves if the mayor refused to do so.

“We’ve asked nicely and waited patiently. We’ve made every logical argument. The people have spoken and they’re running out of patience,” he wrote.

We’ve asked nicely and waited patiently. We’ve made every logical argument. The people have spoken and they’re running out of patience. If @nycmayor won’t open ALL our playgrounds @SEichenstein @KalmanYeger and I will cut the locks open ourselves.

The statement came as videos circulated on social media showing a local Orthodox radio personality, Heshy Tischler, cutting the chains off the gates of a Brooklyn park, to the cheers a crowd of adults and children. Tischler had previously organized rallies in support of opening the parks.

The actions drew support from multiple Republican lawmakers locally and farther afield. Joe Borelli, a New York City Council member from Staten Island, tweeted that he stood with Felder, Eisenstein and Yeger. “Do it!” he wrote.

And Texas Sen. Ted Cruz, a Republican who has repeatedly criticized New York City Mayor Bill de Blasio, offered his support for Tischler’s actions. “Bravo,” he wrote, retweeting a video of Tischler cutting the chains of the park gate.

In recent weeks, some Orthodox Jews in Brooklyn have become increasingly impatient about the slow reopening. Some see a lack of consistency in enforcement of social distancing as thousands of protesters march through the city while the memory of the mayor criticizing the Orthodox community for assembling for a funeral is still fresh.

On Thursday, Orthodox children rallied, blocking the streets in two Orthodox neighborhoods and calling for camps to be opened this summer. On Sunday, protesters gathered to demand that the city reopen playgrounds, led by the three Orthodox lawmakers.

“This is not a situation where if you close the playgrounds that children are staying in their homes,” Felder said at the protest Sunday, according to AMNY. “They are playing outdoors and they are playing in places that are not safe.”

The lawmakers have accused the mayor of treating the Orthodox community differently, pointing to parks in other neighborhoods in the city that are being used openly, even as closure remains the official policy. “There is a double standard, we are supposed to be living in the fairest city in the world — why are some parks open and some not?” Yeger asked Sunday.

On Monday morning, city workers were seen welding the gates to one city park in Williamsburg shut. The welding was later replaced by chains but quickly drew Yeger’s disapproval.

Today's "essential work" by @NYCParks?
On May 18th, at @NYCCouncil hearing, I asked the Parks Commissioner how long it takes his agency to repair its broken sidewalks. His deputy admitted, on the record and under oath, that it could take as long as 7 years.
SEVEN YEARS. https://t.co/VFt8WfqhWk

Not long after the welding was removed and the park chained shut, a video was posted to Twitter showing Tischler cutting the chains on a park gate. It was unclear where the video was taken.

Another video from the scene showed City Councilman Joe Lentol speaking to a group at the park and standing next to Tischler.

“I want to thank all of the people for coming out and opening up this park,” Lentol said. “Tomorrow we go and open up the camps!”