Some believe ‘Fiddler on the Roof’ was staged somewhere in the world every day since the ’60s. COVID-19 ended that. 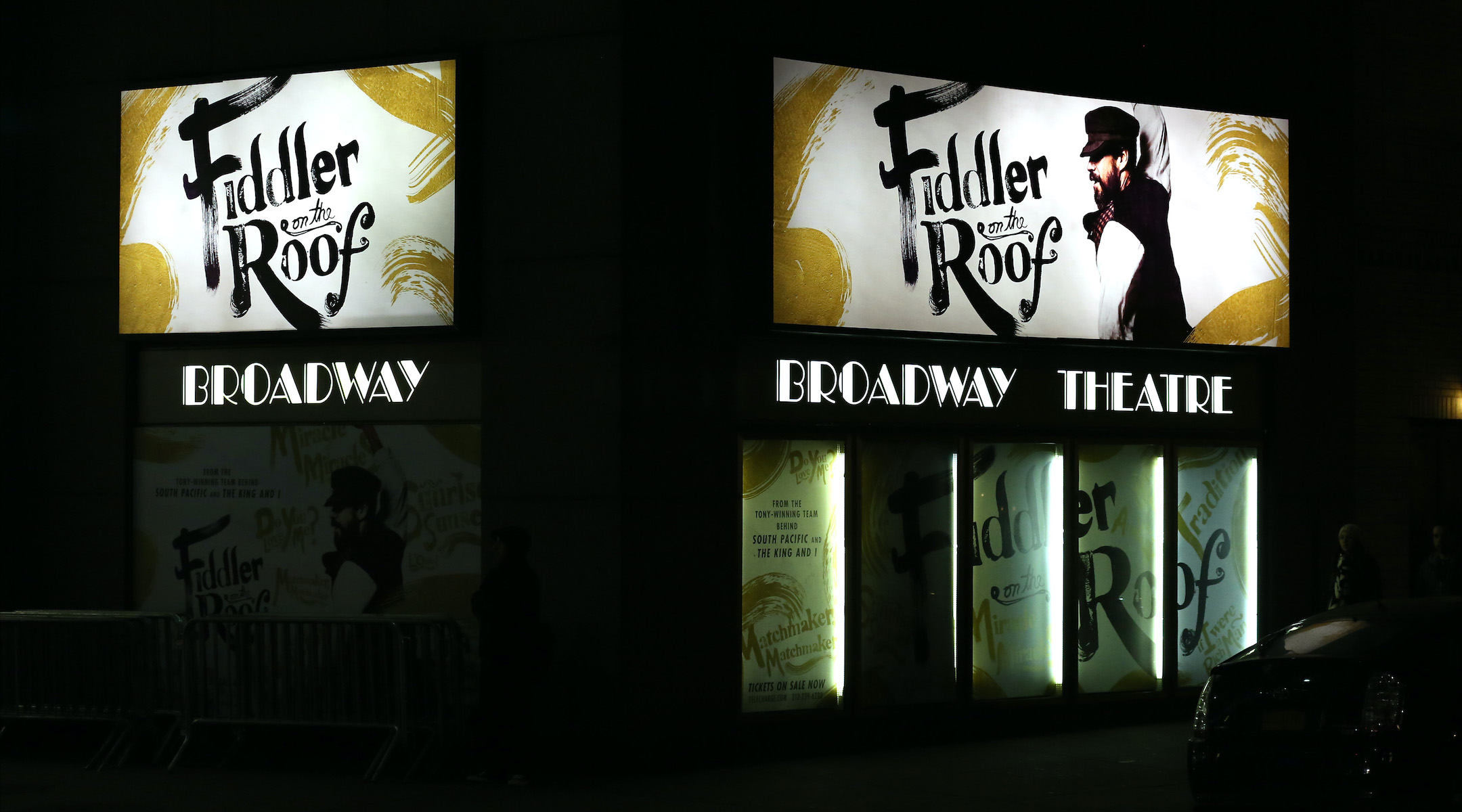 The marquee of the Broadway Theater in New York City advertises "Fiddler on the Roof," Dec. 20, 2015. (Walter McBride/WireImage/Getty Images)
Advertisement

(JTA) — The coronavirus pandemic has done something that no war, natural disaster or other calamity has been able to do for more than 50 years: It’s put a stop to stage performances of “Fiddler on the Roof.”

The current North American tour of “Fiddler” was halted on March 13, a day before Broadway went dark. The last show of that tour before the cancellation, in a wild coincidence, was at Detroit’s Fisher Theatre, the very same venue where “Fiddler” was performed for the first time ever, in July 1964, before its Broadway debut in September.

A planned three-city tour of China of the buzzed-about Yiddish version by the National Yiddish Theater Folksbiene’s “Fiddler” company, which had been scheduled for April and May, also was called off. So were numerous other professional and amateur productions around the world, as in-person shows have been wiped out by social distancing guidelines.

The musical, based on Sholem Aleichem’s tales of Teyve the Dairyman, has been a beloved mainstay of the American musical theater canon  since its Broadway debut 56 years ago. With music by Jerry Bock, lyrics by Sheldon Harnick and book by Joseph Stein, the show’s themes of family intergenerational conflict and religious persecution are considered so universal that “Fiddler” has been performed all over the globe — even in places where Jewish culture is virtually or completely nonexistent.

In a sign of its continual appeal, a second Hollywood film adaptation was recently announced.

The phenomenon may still be surprising to understand for some, since the show’s setting and milieu is so Jewish: It takes place in a fictional shtetl called Anatevka around the turn of the 20th century, and is full of Jewish customs and traditions. Some backers of the original musical believed it would be “too Jewish” for tourists to enjoy and comprehend.

But that hasn’t been the case. “Fiddler” has been performed extensively in Japan, for instance, where a producer once told Harnick that the story is “so Japanese.”

“Hamilton” creator Lin-Manuel Miranda is just one of the show’s many prominent non-Jewish fans. He famously performed some of the music at his own wedding.

“What is that that makes it speak in so many languages?” Broadway legend Joel Grey, who directed the Yiddish version of “Fiddler” that ran Off Broadway for nearly two years, asked in a documentary from last year titled “Fiddler: A Miracle of Miracles.” “Everybody thinks that it’s about them.”

“Fiddler” is so popular internationally that it’s often been said that the show has been performed at least once somewhere in the world every day for years. The “Miracle of Miracles” documentary takes that idea a step further, stating on its concluding title card that “ever since ‘Fiddler on the Roof’ opened on Broadway on Sept. 22, 1964, the show has been performed every day somewhere around the world.”

All that may or may not be accurate, but the “since 1964” part most certainly isn’t. What is known, however, is that the complete absence of “Fiddler” productions is unprecedented.

“We have always said that based on its popularity and its universal appeal, ‘Fiddler’ has a performance every day somewhere in the world,” said John Prignano, chief operating officer for Music Theatre International, or MTI, the rights holder for “Fiddler.” “Unfortunately, as you can imagine during this unfortunate time, that’s no longer true.”

Prignano said that “[we] understand that there are no performances anywhere in the world at the moment.”

He added that MTI does not have documentation of every single performance and day that the show has or hasn’t been performed. 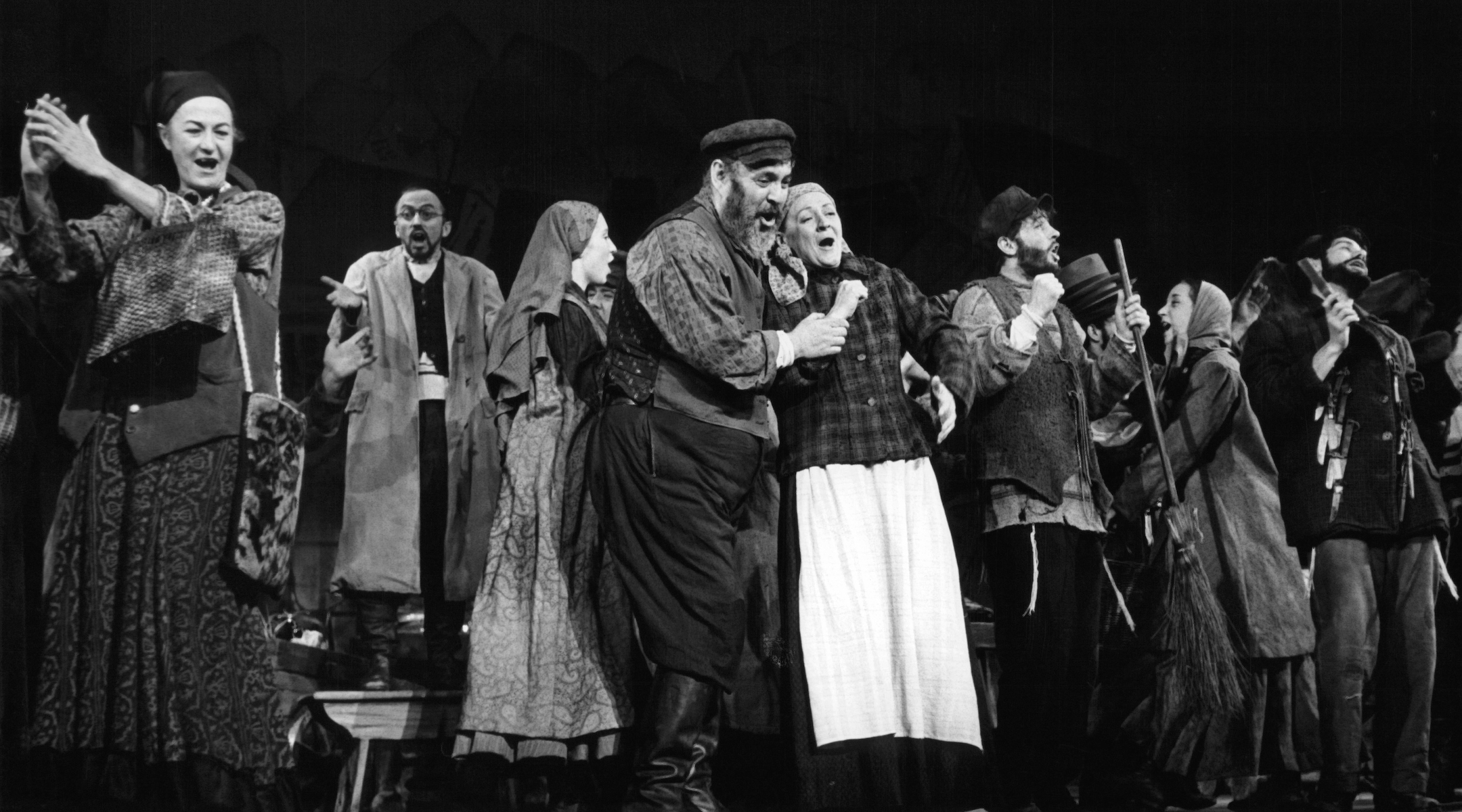 Zero Mostel and Maria Karnilova, center, in “Fiddler On The Roof” on Broadway in 1964, the year it debuted. (Stage Production/Getty Images)

“Though it’s hard (maybe impossible) to verify, that is one of those things that sounds like it should be true — and if it’s not true, it’s likely close to true,” said Alisa Solomon, the author of the 2014 book “Wonder of Wonders: A Cultural History of ‘Fiddler on the Roof,'” of the claim that “Fiddler” has been performed every day.

Solomon added that in her reporting for the book, she was told by MTI that there were “several hundred” licensed productions of “Fiddler” in the year 2012, “from Panama City to Klaipeda,” and that that’s not counting unauthorized productions. Solomon’s book refers to “probably more local productions than the licensing agency can count — more than it even knows about.”

The claim that the consecutive run dates all the way back to 1964 is tougher to prove.

“It can’t be true if you’re starting in 1964 because it would have taken a while for such popularity to be achieved, and there would not have been rival professional productions while Zero Mostel and Herschel Bernardi were performing on Broadway,” said Stephen Whitfield, a retired American studies professor at Brandeis University. Whitfield authored an essay titled “Fiddling With Sholom Aleichem: A History of Fiddler on the Roof” in 2003’s “Key Texts in American Jewish Culture.”

In addition, it’s very likely that the 1964 production took a day off each week, as most Broadway shows do, which right then would have ended the streak.

It’s possible that over five decades there may have been a day here, or a week there, without a “Fiddler” performance. It is pretty clear, however, that the past few months have constituted the longest extended period without an ongoing “Fiddler” production since sometime in the 1960s.

When will we see “Fiddler on the Roof” on stage again? Like so much these days, it’s unclear. Much will depend on when certain areas reopen and whether theater venues are included in those reopenings. Some of the North American tour’s canceled dates have been rescheduled for the fall or next year, as have some regional productions.

Even with no live performances, amateur productions of “Fiddler” have found a way.

The Milton Gottesman Jewish Day School in Washington, D.C., was planning a production for this spring, but instead put together a unique “virtual” production of the show in which the middle schoolers performed at home, with the videos edited into a full production. At the end of April, the cast shared a Zoom call with Zalmen Mlotek, the music supervisor of the Yiddish version, in which he shared stories, sang songs and even said he would record a song for use in the show.

The high school theater department at Montezuma-Cortez High School in Cortez, Colorado, had been scheduled to perform a production of “Fiddler” this spring. But when it became clear in early March that school was shutting down and the planned production would not take place, the dress rehearsal was filmed, according to The Journal, a local newspaper. The footage of that production was streamed live on YouTube on May 8.

Similar scenarios have played out elsewhere. The Polytechnic School in Pasadena, California, also streamed the production of its dress rehearsal on May 8, as did Haldane High School in Cold Spring, New York, the Highlands Current reported, on the last weekend in April. The list goes on.

At its heart, a large piece of the “Fiddler” story is about dealing with generational and cultural change — something that COVID-19 has wrought in spades. Miranda sounded prophetic talking about the musical for the “Miracle of Miracles” documentary.

“In moments of great upheaval, ‘Fiddler’ is always going to seem relevant because the world is changing faster than we can understand,” the Tony winner said. “And we look to our traditions to guide us and sometimes they fail us.”

He added that “in Anatevka, things have been done the same way for thousands of years, but what happens when the outside world is saying you can’t live here anymore? And that’s what the show’s about, and it’s intensely accessible because we are going through times of great change and great upheaval.”