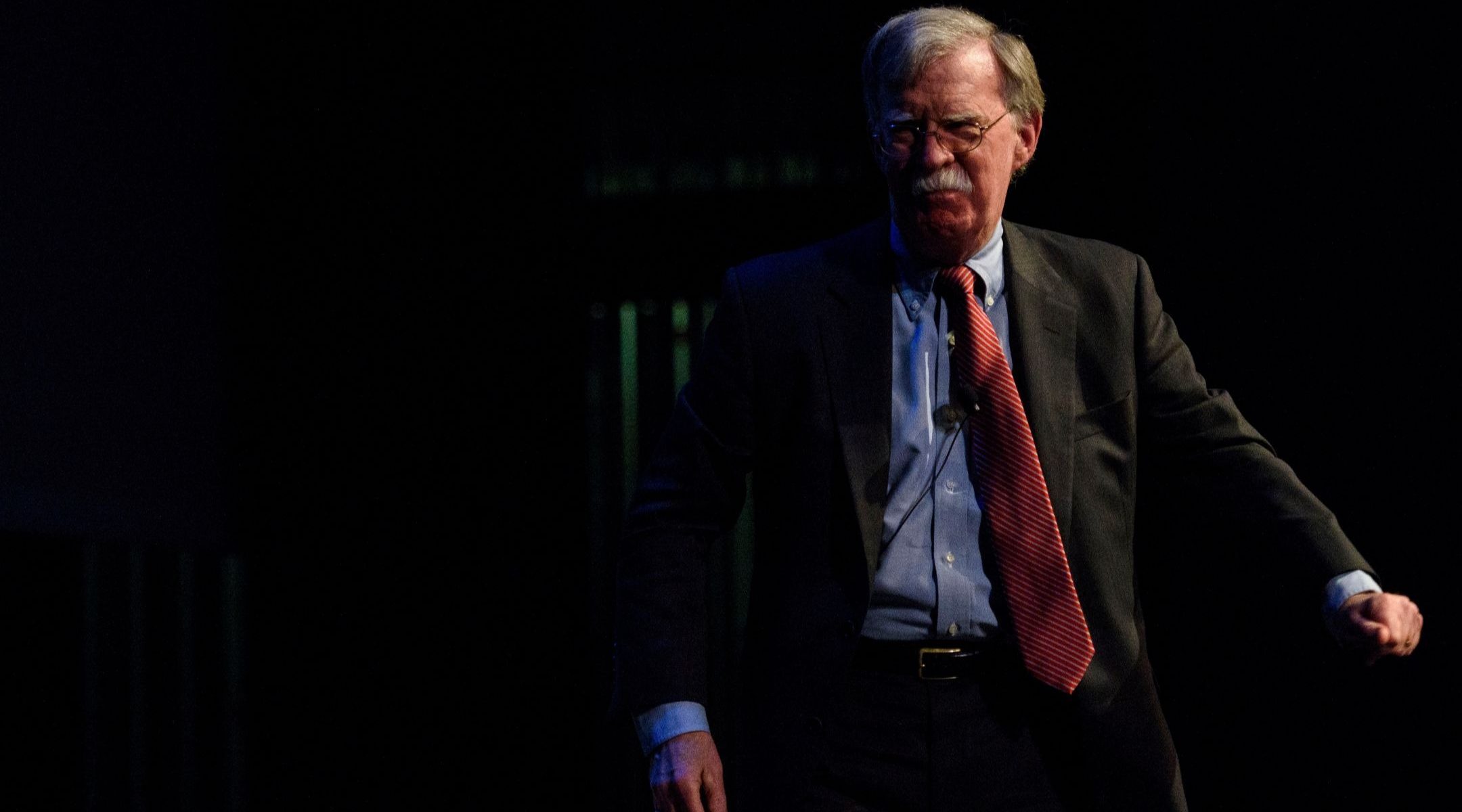 WASHINGTON (JTA) — Search “Israel” in the new book that President Donald Trump doesn’t want you to read and you’ll find several nuggets about the country’s role in recent policy discussions.

John Bolton, Trump’s former national security adviser, plays a pivotal role in all of them. That should be no surprise given that “The Room Where It Happened,” to be released Tuesday, is Bolton’s tell-all memoir about his 18 months working in the Trump administration in 2018 and 2019.

Take, for example, this passage describing the administration’s back-and-forth in early 2019 about whether to withdraw troops from Syria.

“Indeed, in an on-the-record meeting with the press traveling with me on Sunday, January 6, at Jerusalem’s King David Hotel, I said, ‘We expect that those who have fought with us in Syria, in the Opposition, particularly the Kurds, but everybody who’s fought with us, is not put in jeopardy by the coalition withdrawal. It’s a point the President has made very clear in his conversations with President Erdogan of Turkey,’” Bolton writes.

“That is in fact what Trump had said, and it was correct when I said it in Israel. Later in the day, Washington time, asked by a reporter about my remarks as he was boarding Marine One for Camp David, Trump said, ‘John Bolton is, right now, over there, as you know. And I have two great stars. And John Bolton is doing a great job, and Mike Pompeo is doing a great job.”

The takeaway? Bolton was right, a star, and doing a great job. The setting — Jerusalem, packed with 3,000 years of history, its most famous hotel, its halls haunted by tales of violence and diplomatic breakthroughs — is little more than a name-checked place marker.

Still, buried in the nearly 290 pages are some surprising nuggets, telling us a little more about Trump and foreign policy than we knew. You’ve seen the big headlines beyond Trump’s fruitless effort to block the book’s release: Bolton says that Trump likely committed impeachable offenses not just in seeking to extract favors from Ukraine, but from Turkey and China.

Here are some takeaways of specific interest to Jews and the pro-Israel community.

Pro-Israel groups lobbied for Bolton to be secretary of state.

Bolton’s first bid for a job in the Trump administration, during the transition and in its first months, was for secretary of state. He didn’t get the job. Bolton discounts reports that it was because Trump did not like his mustache.

“For what it’s worth, he told me it was never a factor, noting that his father also had one,” he writes, concluding that it was more a matter of not sucking up enough. (Exxon executive Rex Tillerson, who eventually called Trump a “moron,” was named to the post.)

Bolton expresses gratitude to the groups that advocated on his behalf.

“Certainly, I was grateful for the considerable support I had among pro-Israel Americans (Jews and evangelicals alike), Second Amendment supporters, Cuban-Americans, Venezuelan-Americans, Taiwanese-Americans, and conservatives generally,” he writes. “Many people called Trump and his advisors on my behalf, part of the venerable transition lobbying process.”

Bolton doesn’t name the groups or individuals who backed him, but Sheldon Adelson, the casino magnate who is among the most generous of pro-Israel givers, is believed to have recommended him for the national security adviser position. Bolton has a close relationship with an array of centrist and right-wing pro-Israel groups dating back to the early 1990s when he helped reverse the infamous United Nations “Zionism is racism” resolution.

Benjamin Netanyahu and Jared Kushner are not BFFs forever.

The established narrative regarding Israel’s prime minister and Trump’s son-in-law is that they are practically family: Kushner happily took the basement bed when he was a teenager so Netanyahu could have his bedroom during a stateside visit.

During the Trump administration, though, Kushner and Netanyahu seem more like wary exes, according to Bolton. In May 2017, a year before joining the administration, Bolton met with Netanyahu in Israel. Netanyahu was not enthusiastic about Trump’s naming Kushner as the point man on Middle East peace.

“Iran’s threat was the centerpiece of our attention, as it should have been for any Israeli Prime Minister, but he was also dubious about assigning the task of bringing an end to the Israel-Palestinian conflict to Kushner, whose family Netanyahu had known for many years,” Bolton writes. “He was enough of a politician not to oppose the idea publicly, but like much of the world, he wondered why Kushner thought he would succeed where the likes of [Henry] Kissinger had failed.”

Kushner is not thrilled with Netanyahu’s direct lobbying of his father-in-law, according to Bolton. The book describes how Bolton scrambled to head off a meeting in August 2019 in Switzerland between Trump and Javad Zarif, Iran’s foreign minister. (The meeting never took place.) Bolton writes about his efforts to stave off the meeting, and includes Netanyahu.

“Kushner was on the phone to David Friedman, US Ambassador to Israel, telling Friedman that he was not going to allow Netanyahu’s call to go through. (Now we knew who was stopping all those calls to Trump!) When he hung up, Kushner explained he had stopped this and an earlier effort by Netanyahu because he didn’t think it was appropriate for a foreign leader to talk to Trump about whom he should speak to,” the book says.

Trump twice decided to pull troops out of Syria. The first time, in late 2018 and early 2019, Bolton and others eventually got Trump to back down, although Trump’s threat convinced Defense Secretary James Mattis to quit. In October 2019, a month after Bolton quit over differences, Trump again decided to quit, leaving America’s Kurdish allies in northern Syria vulnerable to the predations of their enemies, the Turks.

Netanyahu has insisted in briefings here with reporters that he was fine with Trump’s Syria policy because Trump made clear to Israel that Israel was free to do what it needed to do to stem Iran’s hold on the country.

Was Netanyahu sincere or was he careful not to antagonize Trump, a friend who had done more than any previous president to meet the demands of Netanyahu’s Likud Party, including moving the U.S. Embassy to Jerusalem and pulling out of the Iran deal?

An array of Israeli figures outside government, former generals and opposition leaders among them, decried the pullout from Syria because of the messages it sent — that the United States would so cavalierly cut off allies, and that it was ready to leave the fate of the country to Israel’s north to Russia, Iran, Hezbollah and the Assad regime.

Bolton says in the book that behind closed doors, that also was the view of Netanyahu’s government. He describes events leading up to Trump’s first pledge to pull out, and then his walkback. When it seemed as if the pullout would happen, Bolton, Pompeo and Mattis start calling U.S. allies to give them the news. France and Israel particularly are appalled.

“Israel’s Ambassador Ron Dermer told me that this was the worst day he had experienced thus far in the Trump Administration,” Bolton writes.

Nikki Haley is not ready for prime time.

Haley, Trump’s first U.N. ambassador, is a darling of the pro-Israel center and right. She was instrumental at the United Nations in isolating the Palestinian delegation and keeping it from obtaining statehood status in a number of agencies, and she routinely gets the biggest ovations at the American Israel Public Affairs Committee’s annual conferences.

Bolton depicts her as a bumbling neophyte who screws up messaging. The former South Carolina governor “had no qualifications for the job, but it was ideal for someone with presidential ambitions to check the ‘foreign policy’ box on her campaign resume” is how he introduces her.

Bolton describes an Oval Office meeting that resulted in a decision to leave the U.N. Human Rights Council (in large part because of its anti-Israel bias). That conversation behind them, Trump asks Haley, “How’s it going?” generally. Haley starts talking about China trade policy, “which formed no part of her responsibilities,” Bolton writes. Then she makes a request: She wants to go to India to meet the Dalai Lama.

“The purpose of this trip was unclear, other than getting a photo op with the Dalai Lama, always good for an aspiring pol,” Bolton writes. “But the minefield she strayed into by raising the China trade issue showed a political tin ear: Once Trump wondered how China would view Haley’s seeing the Dalai Lama, the trip was essentially dead.”