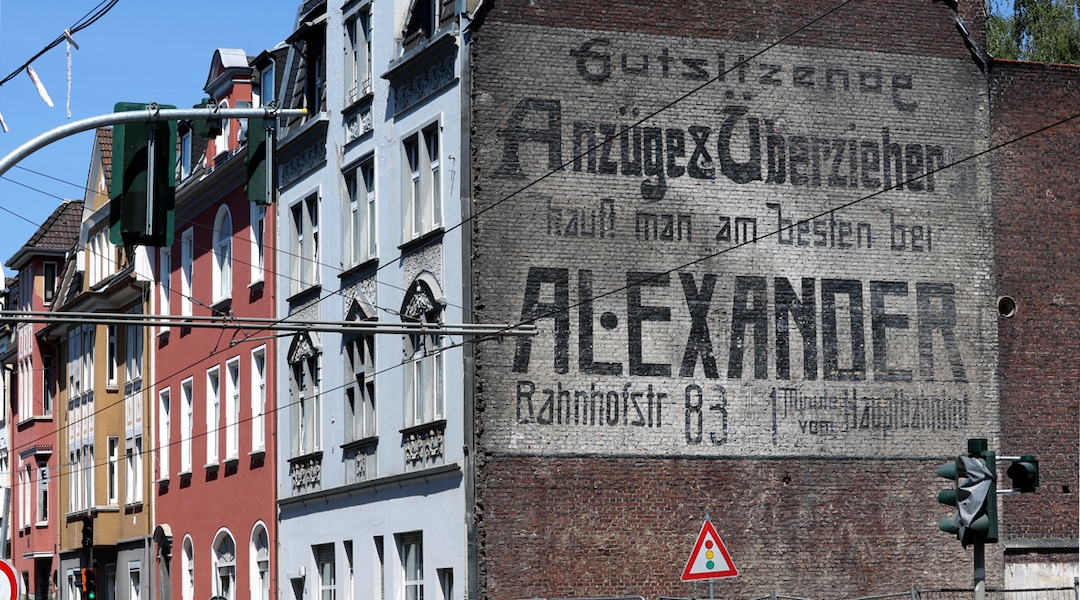 BERLIN (JTA) — In May, a demolition crew tore down a building in the western German city of Gelsenkirchen. As the walls fell, a 110-year-old advertising mural on the adjacent brick wall was exposed.

It read: “For suits and overcoats with a perfect fit, shop at Alexander.”

The large Alexander family was Jewish and had moved to Gelsenkirchen around the 1910s from another German city. The Nazis eventually expropriated their businesses and property.

Some family members fled to Brazil. Others made it to the United Kingdom and then to the United States. One brother was captured in exile in Belgium, deported to Auschwitz and murdered. Today, descendants of the Alexanders live in Brazil and the U.S.

Over time, another building went up alongside the mural, further blotting out the memory of the Alexander family. But the structure also protected the mural for decades.

“If it is open and exposed to the weather, it would not last long,” city spokesperson Martin Schulmann said. “We really were lucky.”

Now Gelsenkirchen, a city of about 260,000 nearly 150 miles from the Dutch capital of Amsterdam, is debating how to best preserve the mural. It’s considering a plan that might include a memorial plaque and windows in the eventual new neighboring structure through which visitors could see the mural.

The timing is unclear, but there is general agreement on preservation among the city-run housing group that owns it.

The news, delivered today in a letter from Mayor Frank Baranowski to Jewish community president Judith Neuwald-Tasbach, was welcomed.

“He said that my wish would be realized,” Neuwald-Tasbach said. “And I am totally happy about it.”

The history of the Alexander family has been long known to local activist Andreas Jordan, whose Gelsenzentrum association has been trying to have “stumbling stone” memorials installed at their last residences. Jordan had also urged the mayor to protect and keep the wall accessible.

It “opens a window to the past to the historical, cultural and social life of the Jewish people here and … to the booming economy of the Weimar period,” he said. “It’s not just an old wall.”

“It’s something that the people themselves put up,” said Neuwald-Tasbach, whose great-grandparents had a bedding shop in Gelsenkirchen. “They knew the Alexanders, and my grandfather probably bought his suits, and they probably bought their beds from us.”

Back then, the city’s Jewish community had nearly 2,000 members. Today it has about 380, mostly coming from the former Soviet Union.

Neuwald-Tasbach hopes the discovery will trigger the city’s students to research local Jewish history, perhaps as part of next year’s events marking 1,700 years of Jewish life in Germany.

“Some people don’t know that there was Jewish life here for so long,” she said. “[Local Jews] were normal people, and some of them had shops, and they wore suits with a perfect fit.”