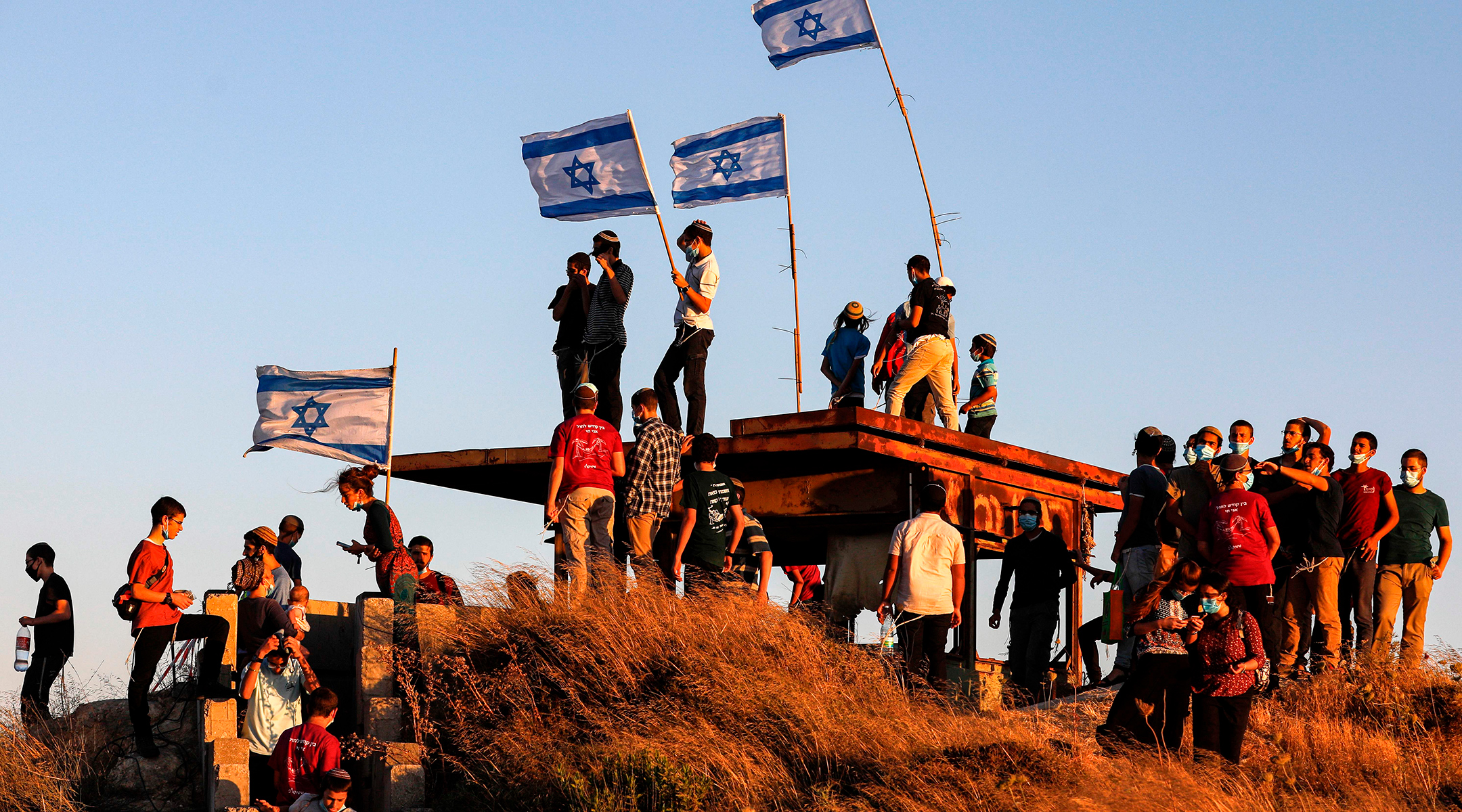 Hundreds of Israeli settlers, some wearing masks due to the COVID-19 pandemic, protest the Trump administration's peace plan near the Palestinian West Bank town of Halhul, June 30, 2020. (Menahem Kahana/AFP via Getty Images)
Advertisement

NEW YORK (JTA) — In recent weeks, I have been heartened to see major American Jewish organizations across the political and religious spectrums speak out in unified opposition to Prime Minister Benjamin Netanyahu’s West Bank annexation plans.

I have long served in leadership positions in the American Jewish community, and this moment is unprecedented: Annexation would fundamentally alter our community’s relationship with Israel. As an American Jew deeply invested in democracy and equality, and who continues to believe in the importance of Israel as the ancestral and modern-day homeland for the Jewish people, this moment requires the American Jewish community to take action or risk losing younger Jews for good.

In my former roles as CEO of National Council of Jewish Women and executive director of the JCRC in Boston, I made the case for Israel countless times on the national stage and with local leaders and activists. I pointed to the good-faith efforts of Israelis to come to the table in an effort to broker a negotiated, just solution to the Israeli-Palestinian conflict and noted that the Israeli Declaration of Independence calls for all citizens to be afforded “complete equality of social and political rights to all its inhabitants irrespective of religion, race or sex.” If West Bank annexation happens, this would no longer apply.

The new borders being drawn by Prime Minister Benjamin Netanyahu and his allies in the Trump administration would confine millions of Palestinians to disconnected enclaves, controlled by the Israeli military and encircled by Israeli territory. The Palestinians would not be granted citizenship or equal rights, an intolerable situation.

This annexation would make the military occupation of the Palestinian people permanent. It would require us to square our Jewish values of freedom and democracy with the permanent denial of citizenship and equality to millions under its control, an impossible task.

If this happens, I fear that many American Jews will simply opt out of supporting and caring about Israel rather than trying to justify these indefensible positions. I fear even more that a generation of young Jews, righteously marching on American streets for racial justice, will look at Israel and see a nation not living up to the values they have ascribed to it for their whole lives.

A diverse cross-section of the American Jewish community is speaking out precisely because we know that Netanyahu’s annexation plan is religiously, ethically and legally wrong, and nothing short of a disaster for Israel’s future as a democratic homeland for the Jewish people. We have an obligation to speak out when Israel’s founding values are threatened.

The annexation plan pushes us further from peace, and further from a secure, democratic, Jewish state of Israel that promotes equality and justice for all her citizens.

But it doesn’t have to be this way. Even AIPAC has given Congress the “sign” that it is OK to oppose annexation.

We must continue to sound the alarm over the detrimental consequences of Netanyahu’s recklessness. And we must reaffirm our commitment to peace and decades of bipartisan American foreign policy — now being reversed by the Trump administration — which sought to condemn the unlawful settlement expansion that has led us to this point. The future of Diaspora-Israel relations hangs in the balance.

Nancy K. Kaufman
is immediate past CEO of the National Council of Jewish Women and served as executive director of the JCRC of Greater Boston for 20 years. She is currently an independent consultant and serves on the board of the New York Jewish Agenda.
The views and opinions expressed in this article are those of the author and do not necessarily reflect the views of JTA or its parent company, 70 Faces Media.