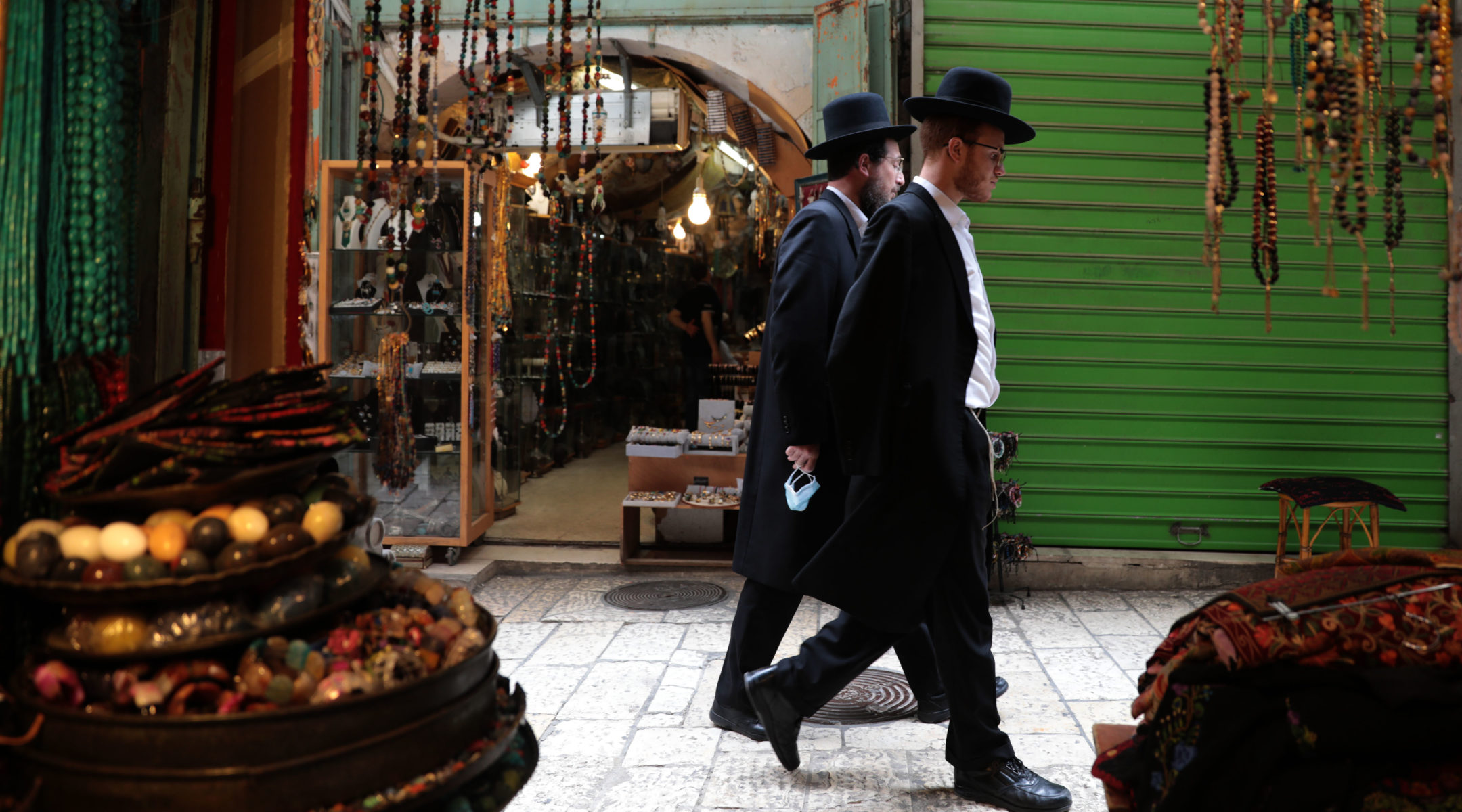 NEW YORK (JTA) — At 4 a.m., Israeli rocker Aviv Gefen was still crying, head in hands, in the empty Haifa-area amphitheater where he had performed the previous late May evening. Staff members urged him to go home.

In a televised interview days later, the popular performer described what had happened. Due to the COVID-19 crisis, he had performed in a venue empty of anything but amphitheater staff and a videographer. He had dedicated a song “with love” to the community of Bnei Brak. The densely populated haredi Orthodox community there was hit particularly hard by the coronavirus.

“I leave the stage,” Gefen recalled, “and I see on my telephone, without exaggeration, 420 messages. I start opening them, scrolling, and learn that someone had given my number to all of Bnei Brak. And I cried. And I could not leave the empty amphitheater. I started to cry. The love, the division in the nation, suddenly everything came together.  The love I received came from people I had denigrated since I was 19. People who now erupted with love and with tears.”

The tension between secular and religious Israeli society has existed since before the country was founded and remains a contentious societal dividing line.

“For years we learned how to hate the other…” Gefen continued.  “Suddenly I saw the other. So how did the corona change me? Just like this: I learned to respect. A flame of love, simply amazing, was lit. I cannot even describe it in words, only in tears.”

The longstanding social schism in Israel between the country’s rapidly growing haredi community and its secular citizens isn’t disappearing, of course. Issues like religious exemptions from military service, heavy reliance of many haredim on social services and whether public transportation should operate on Shabbat haven’t evaporated.

But cracks in the secular-religious divide, like Aviv Gefen’s epiphany, have begun to appear. And I believe much of the credit for the happy fissure goes to an unlikely catalyst: Israeli television.

There was a time, and it wasn’t long ago, when haredim were portrayed as aliens at best and adversaries at worst. In many American films, haredi life — as in the recent series “Unorthodox” — is still portrayed as something suffocating to escape from, a drab world filled with humorless men and women.

Recent Israeli shows are more realistic. Rather than aiming at sensationalism and confirmation of biases, they seek to provide a more accurate picture of haredi life — and, in the process, help foster understanding and empathy.

It may have begun with the wildly popular show “Shtisel,” which first aired in Israel in 2013 and was eventually featured on Netflix.

The series, about four generations of a Jerusalem haredi family, is a lighthearted drama, enlivened by humor and even some surrealism. But its portrayal of haredim as normal people with normal challenges and feelings, experiencing universal pains and joys, humanized haredim for many thousands of viewers.

Then in 2017 came “Shababnikim” (slang for haredi youth who may not belong in yeshiva), a comedy that portrayed four very different yeshiva students and their travails.

Most recently, Israeli viewers were treated to a remarkable, and remarkably moving, reality series called “Od Nifgash” (“We Will Meet Again”), which features five secular Israelis who wish to reconnect to close but now estranged family members (in one case, a twin brother) who became religious. Each individual is paired with a haredi intermediary in an effort to familiarize the secular Israelis with haredi life as part of the effort to connect them with their estranged relatives and bring about reconciliations.

The series’ brilliant conceit was to swear each of the secular Israelis to total silence for the first 36 hours they spent with their “handlers.” That forced them to only fume to themselves when they saw or heard things that riled them up, preventing arguments or expressions of anger. By the time their enforced silence had expired, they had come to experience — even from their distance — the richness and beauty of Jewish religious life, its family-centeredness and meaningful rituals.

Although their fundamental differences of approach to life remained, each secular Jew and his or her haredi counterpart became friends.

The series is currently, at this writing, ongoing, and viewers don’t yet know whether the mission that each pair of Jew is on — to see if the estranged relative can be reconnected to his or her family — will be successful or not. But the hours of filmed interactions of the respective couples are their own testimony to the possibility of not only cooperation between secular and haredi Jews, but even of forming deep personal bonds.

There is irony in the fact that media like television (shunned by most haredim) and the internet (which, if used, is used for work purposes but not for entertainment) should be what is allowing their lives to become more familiar to their secular neighbors. But good things can emerge from all sorts of unexpected places.

The culture wars in Israel will surely rage on for the foreseeable future. But if enough non-religious Israelis can be brought to see haredi society through a different lens, and enough haredim will be willing to accept and befriend secular Jews, that can only bode well for the shared Jewish future.