As the COVID-19 pandemic unfolds, Boston’s Jewish community unveils a memorial to its victims 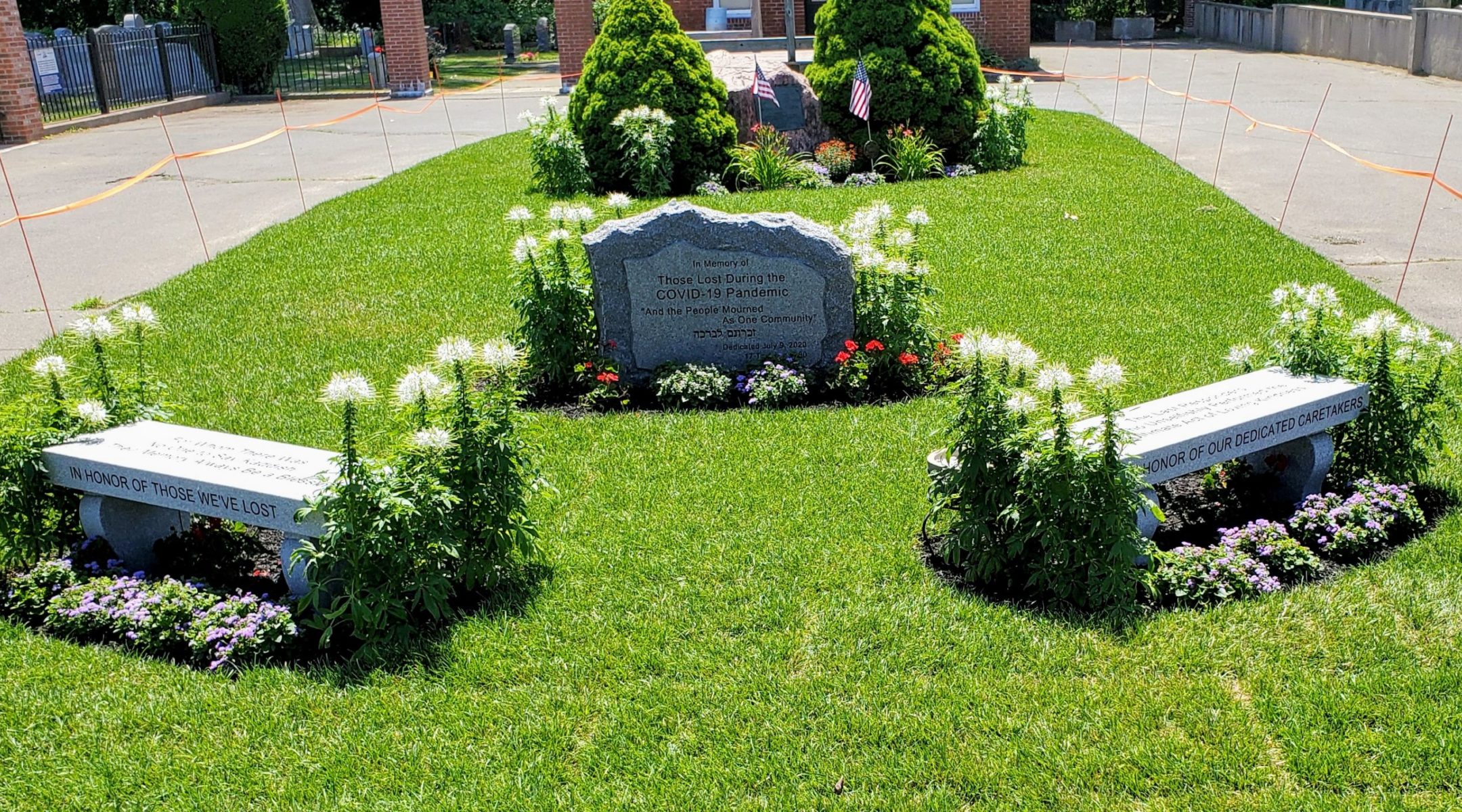 Boston's Jewish community has unveiled a memorial to COVID-19 victims even as the pandemic continues. (Courtesy Jewish Cemetery Association of Massachusetts)
Advertisement

BOSTON (JTA) – The coronavirus pandemic is still unfolding, but a permanent memorial to its Jewish victims has already gone up in Boston.

The city’s Jewish community unveiled a memorial last week to those who have died during the pandemic in a virtual gathering that also honored caretakers and “last responders,” or people who have tended to funerals and burials.

The event and dedication took place July 9, which on the Jewish calendar was the 17th of Tammuz, a day of fasting that kicks off a three-week-long annual mourning period.

About 650 people signed on to hear words of comfort from communal and religious leaders. They also watched as a memorial stone and two granite benches were dedicated on the grounds of the Baker Street Memorial Park, a complex of 42 Jewish cemeteries managed by the Jewish Cemetery Association of Massachusetts that has historic ties for the area’s Jewish community.

“The Jewish community needed holding, to be heard, to be held, and to be healed,” said Rabbi Suzanne Offit, who first proposed the program. Hebrew College, Combined Jewish Philanthropies of Greater Boston, the Jewish Cemetary Association and others joined in.

Since the beginning of the pandemic, Offit, who is also a chaplain, listened to many people speak about their profound sense of loss as a result of families being prevented from gathering in person, she told the Jewish Telegraphic Agency in a phone conversation.

“Our Jewish tradition teaches us to visit the sick, to accompany the dead, and to comfort the mourner,” Offit said in her opening message during the pre-recorded program. But COVID-19 “ruptured our sense of community. … Our hearts are broken.”

The memorial was created by the cemetery association and donated by Steve Schneider, the owner of century-old Slotnick Monuments.

“Our community has experienced a massive trauma, and we needed to provide a place to mourn and reflect,” the Jewish cemetery group’s executive director, Jamie Cotel, said in the statement. “We didn’t want to wait years to erect a memorial.”

Speaking from the cemetery at the memorial, Cotel described the cemetery’s staff as “unsung heroes” and praised them for their tireless, behind-the-scenes work to bury hundreds of people.

For Jonathan Linden, whose father died of COVID-19 in April, the virtual gathering proved comforting in ways he hadn’t expected.

After his father’s death, the family, including his mother, participated in person at a small graveside service. They also arranged three remote shiva gatherings on Zoom.

“We did the best we could to create a space for mourning and grief,” he said by phone. But he said those required a lot of planning and involvement at a time of distress.

Being able to pause in the middle of a day to tune into the mourning program, and knowing that others were doing the same, offered a respite.

“This was a moment to simply not do anything but grieve for a little while,” Linden said. “It was lovely and beneficial.”