Poland has an anti-Semitism problem. Here’s how the Trump administration could help fight it. 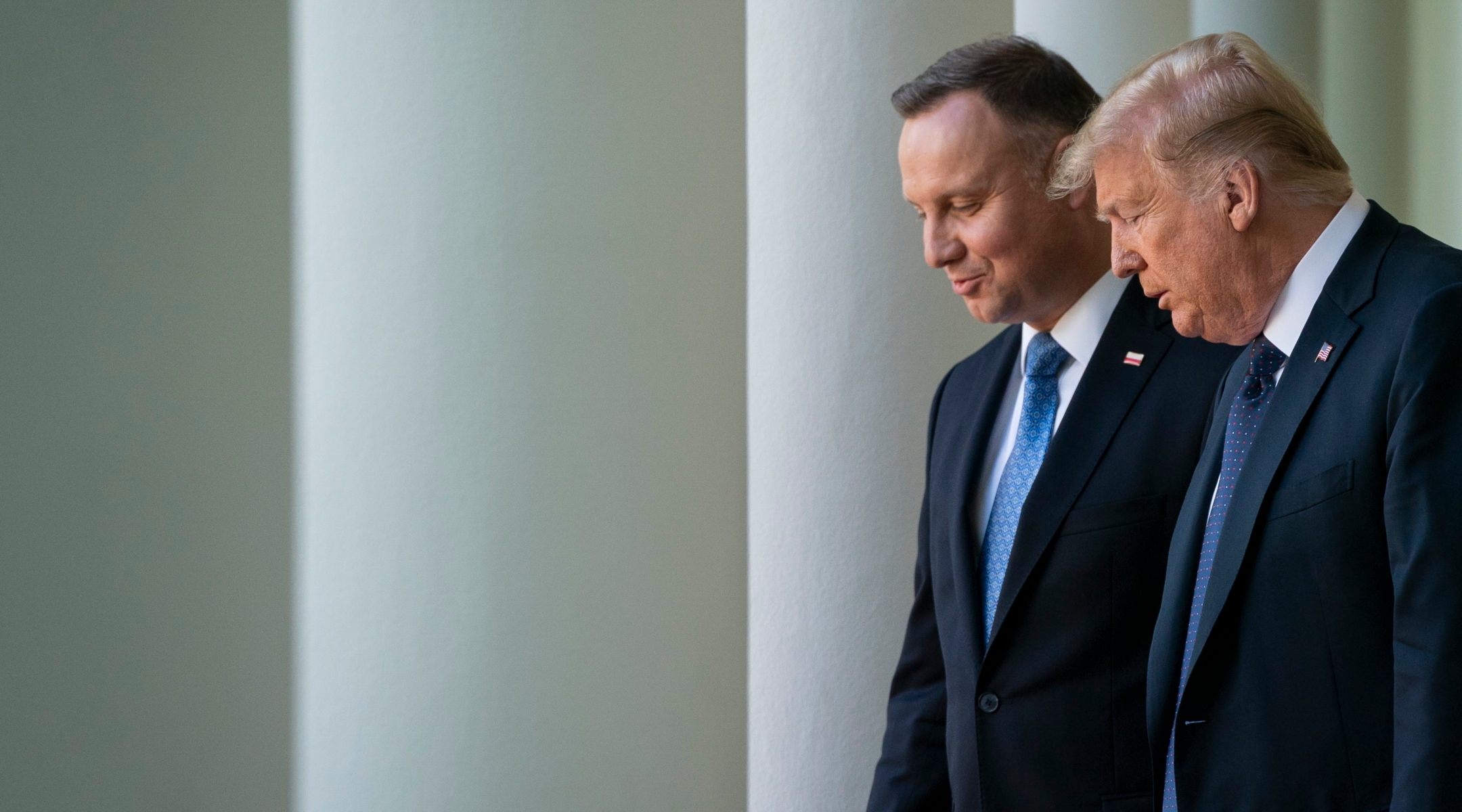 WASHINGTON  (JTA) — During my four years as the State Department’s Special Envoy to Monitor and Combat Anti-Semitism, I was exposed on numerous occasions to one of the great truisms of the past few centuries of Jew-hatred. There are two forms of evils that are frequently, inextricably linked— anti-Semitism and authoritarianism.

There is no better illustration of the relationship between rising authoritarianism and anti-Semitism than the recent presidential campaign in Poland.

The successful campaign of the ruling Law and Justice party to re-elect President Andrzej Duda was not just about Jews. It was a campaign that relied heavily on attacks against foreigners and minorities of all stripes, especially the LGBTQ community. Duda pledged to ban LGBTQ adoption and same-sex marriage. He said “LGBT ideology [was] more destructive than communist indoctrination.” The ruling party employed the slogan “LGBT are not people.”

Though Poland once was the home of one of the largest Jewish communities in the world, today there are only approximately 10,000 Polish Jews remaining, a tiny minority in a country of 40 million. The attacks on Jews during this campaign demonstrate that in a nation where checks on state power, judicial independence and press freedoms are being rapidly eroded, anti-Semitism can thrive even when there are few Jews to target.

Some of the schemes used by the Law and Justice (or PiS) campaign were similar to the type of effective, dog-whistle anti-Semitism used by increasingly authoritarian leaders in countries like Hungary. Such rhetorical tactics never directly use the word “Jew,” but bigoted voters still receive the message. Tax-payer funded television in Poland, which in recent years has been controlled by the ruling party, tied the opposition candidate, Rafał Trzaskowski, to the well-known Jewish philanthropist George Soros. For good measure, government media also implied that Trzaskowski is not a good Catholic and declared he does the bidding of “a powerful foreign lobby.”

Duda and his allies extended the idea that Jews in Poland are not fully Polish through a forceful rejection of restitution for pre-World War II Jewish property.

The real power broker in Poland — the founder and President of PiS, Jarosław Kaczyński — capped the government campaign by being interviewed on the right-wing Catholic and traditionally anti-Semitic radio station Radio Maryja. He took the opportunity to castigate the opposition candidate, Trzaskowski, for even considering restitution for Jewish property. He stated that “[o]nly someone without a Polish soul, a Polish heart and a Polish mind could say something like that …”

State television reiterated this sentiment by asking whether the opposition candidate “will fulfill Jewish demands.”

President Duda himself exploited the issue of restitution for pre-WWII Jewish property. Arguing against any settlement of Jewish claims, he proclaimed that he would never reward one ethnic group over another. This type of rhetoric led Polish Chief Rabbi Michael Schudrich to respond that “[t]he Jewish community of Poland was shocked that President Duda made a statement that specifically appealed to the votes of anti-Semites.”

The government left no stone unturned driving home this message. At one point in the campaign, state television dug up a statement by the Mayor of Warsaw that he believed in the god of Spinoza — the Jewish 16th-century Enlightenment thinker. From this quote the station deduced that the Catholic leader of the opposition must be hostile to Catholics since he was an admirer of this “Jewish philosopher.”

Some, perhaps thinking wishfully, have speculated that Duda’s campaign tactics were merely convenient political ones. They argue that now that the election is over, the ruling party will abandon this scapegoating of the tiny Jewish community. Perhaps Kaczyński, Duda and other PiS luminaries don’t harbor any ill will toward Jews. But even if this is true, it does not absolve the governing party. The issues of restitution for stolen Jewish property and complicity in WWII atrocities by some Poles has been heatedly debated in recent years. Surveys reveal rising levels of anti-Semitic attitudes among many Poles. The cynical manipulation of bigotry by the ruling party in this recent election can only have negative, real-world consequences for the Polish Jewish community.

What can be done to discourage would-be authoritarians from stoking hatred for political gain? No sole actor, be they a multilateral organization, an international NGO or even the government of a superpower, has the ability single-handedly to stop abuse of human rights in another nation-state.

The scapegoating of minorities for political advantage in the run up to the Polish presidential election can’t be undone. Yet we can use some of our influence to send a message to the Polish government and those political actors who would act similarly that there is a price to be paid for homophobic and anti-Semitic demagoguery.

That can’t be done by just handing out carrots like invitations to the White House. It’s time to use some sticks in support of human rights in Poland.

Ira N. Forman
served as the U.S. State Department's Special Envoy to Monitor and Combat Anti-Semitism from 2013 to 2017.
The views and opinions expressed in this article are those of the author and do not necessarily reflect the views of JTA or its parent company, 70 Faces Media.