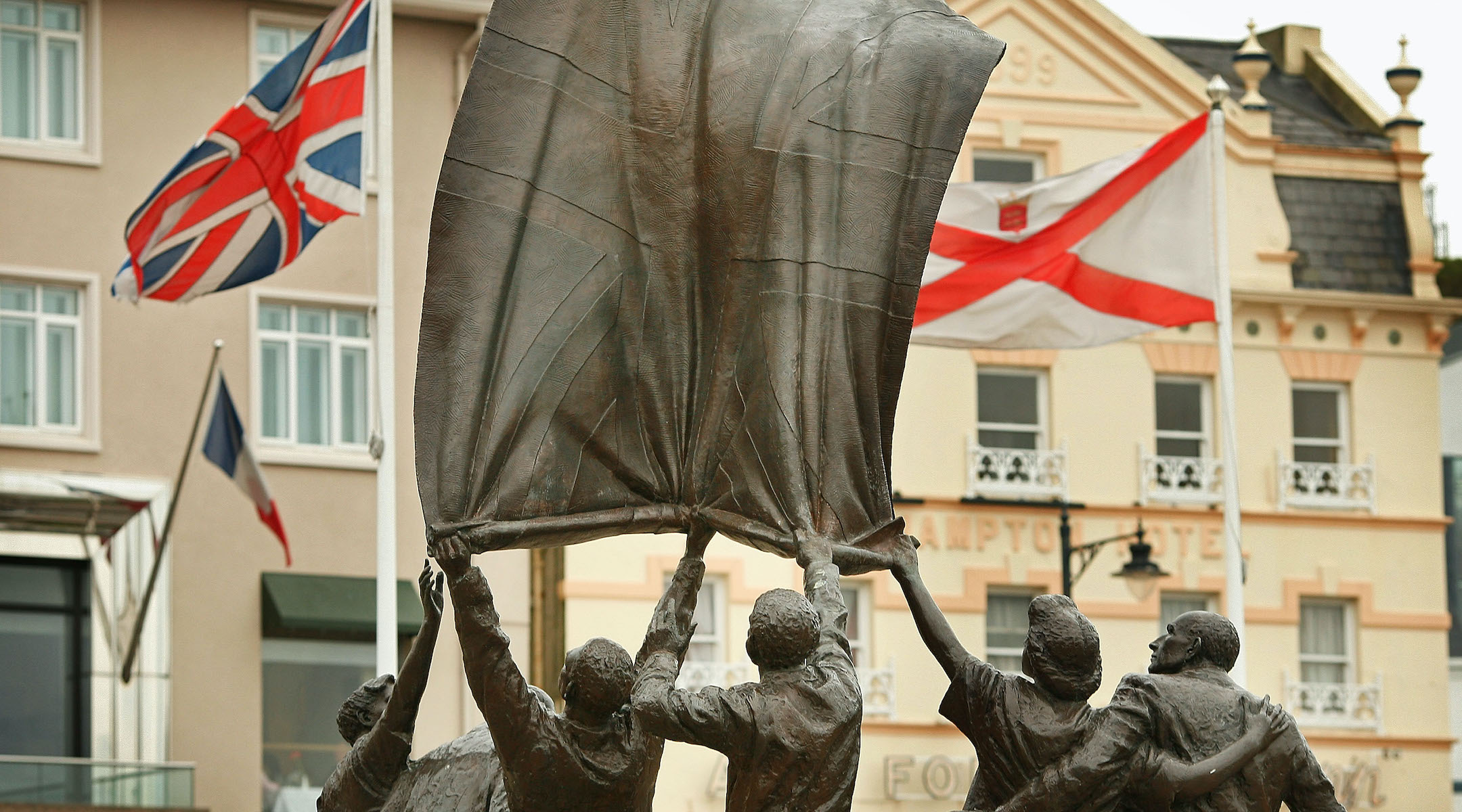 LONDON (JTA) — Jersey is one of Britain’s most unusual places — an autonomous island closer to France than to mainland England, a tax haven for London’s superrich and the last remnant of the English crown’s Norman domains.

But Jersey is also home to a rare non-urban British Jewish community with a unique history forged in the face of the Nazi occupation during World War II — the only German occupation of any U.K. territory.

These days, though, the community, with a formal membership of only 49 and an average age of over 70, has had to negotiate the coronavirus crisis as its membership continues to shrink.

In May, Jersey’s Jewish Congregation, which operates in a small converted Methodist schoolhouse on the southwest corner of the craggy island, for three weeks held the unlikely title of the only legally operating Shabbat service in Britain. Synagogues were shut down across Britain in mid-March, and the reopening process began only five months later. But Jersey contained the virus so well that it was allowed to open houses of worship — with limits on how many could attend at a time — earlier than the rest of the country.

The community held its first full service since March — with a minyan of twelve men — in mid May, as the congregation’s more vulnerable members emerged from self-isolation. Face masks and gloves were ordered beforehand, chairs were placed yards apart and prayer books, once touched, were quarantined for a week after use. 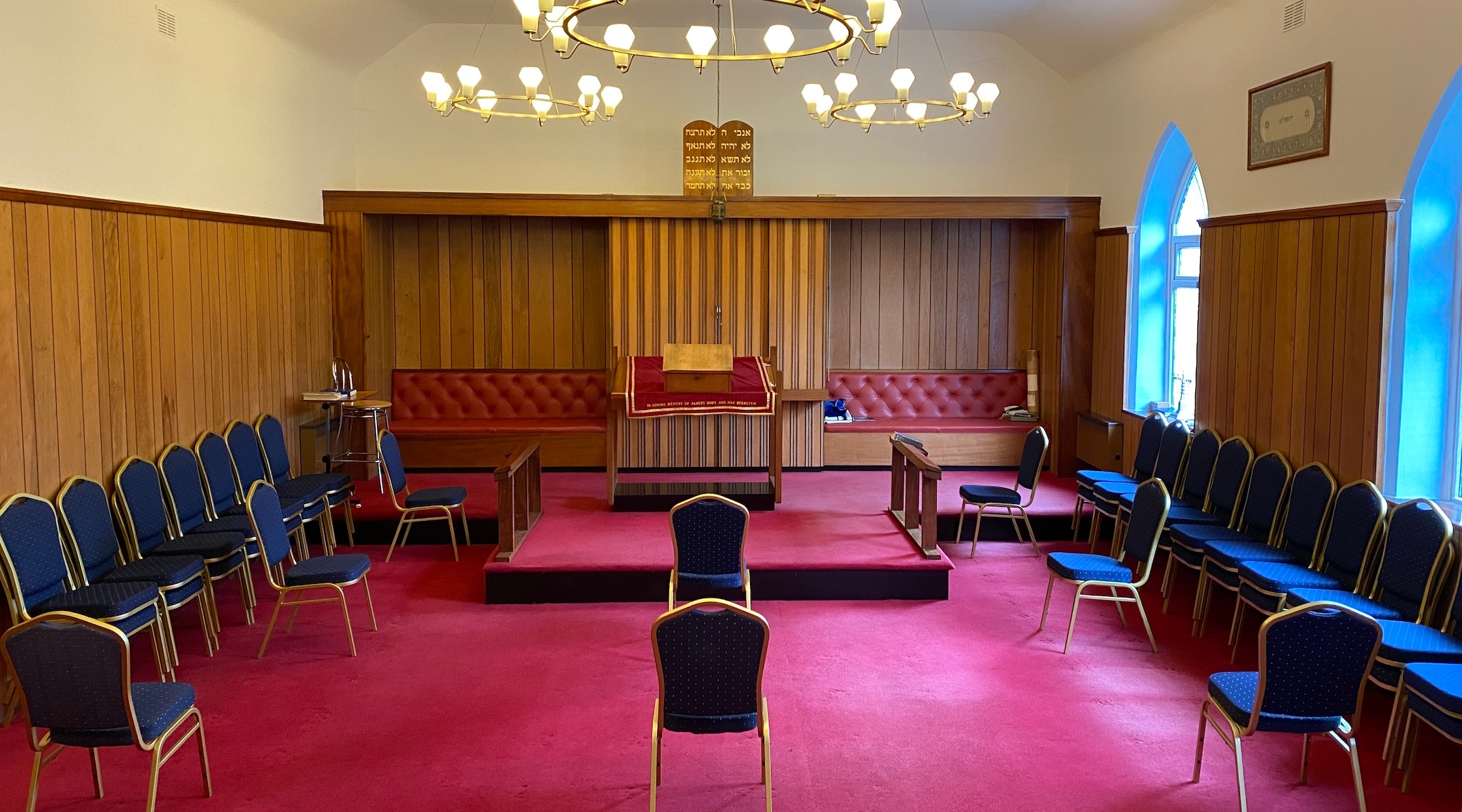 The Jersey synagogue socially distanced its chairs for its first Shabbat service since the start of the pandemic. (Courtesy of the Jersey Jewish Congregation)

No London-accented melodies filled the hall of the building, built in the 1970s — singing was strictly prohibited.

“If this is the new normal, then it didn’t feel very normal,” said one attendee of the Shabbat service who did not want to be named.

An ‘honest’ community comes to terms with its decline

During the pandemic, the community’s isolation has been brought into focus. A few more observant members live on the roads surrounding the synagogue in the town of St. Brelade, but most live a drive away on the small island.

The Channel Islands have been inaccessible from the mainland since March, when the islands went into strict lockdown. Unable to travel, the island’s kosher food stocks — especially of meat — and links to the wider British Jewish community were severed.

In normal times, many community members traveled back and forth regularly, either to visit family members or attend synagogue or to pick up holiday supplies. Only a few congregation members keep fully kosher at home, and most will eat non-kosher when out, but they still import kosher food and subscribe to some of the basics of Jewish observance. 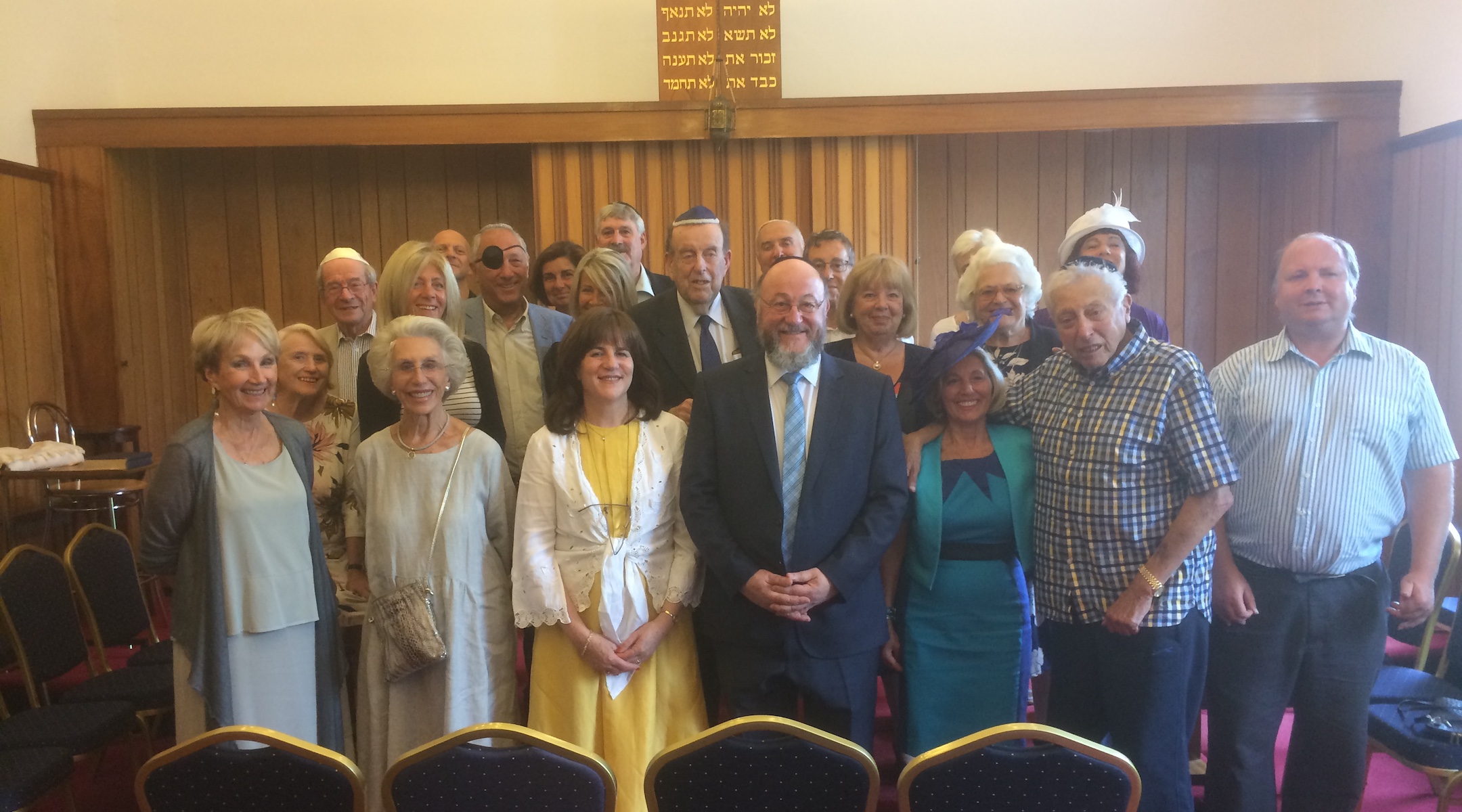 Malcolm Weisman, a non-ordained rabbi called a reverend by British Jews, leads High Holiday services and the occasional Shabbat service. Weisman has ventured to remote Jewish communities like the one in Jersey for decades. A Jewish Telegraphic Agency article from 1976 reported that he visited as many as 50 a year.

“There is a saying in Yiddish – ‘it is hard to be a Jew’ – but it isn’t hard to be a Jew,” said Stephen Regal, the congregation’s president. “You just have to arrange your life to be one. That is how we operate here on Jersey, and that’s how we’ve got on with it the past few weeks.”

He added: “If you have no alternative, you make do with what you’ve got.”

Jersey’s problems are not unique. Since the 1970s – Jersey’s heyday – dozens of small, regional Jewish communities across the U.K. have vanished as Jews concentrated in London and Manchester.

Anita Regal, who moved to Jersey at age 16 in 1960 (and is Stephen Regal’s sister-in-law), has seen the Jersey community’s rise and gradual decline.

“Lots and lots of people came to live here in the 1960s,” she said over a crackly phone line.

Middle-class Jews came to the Channel Islands during the 1960s and 70s to service the booming trade as an offshore tax haven. They were a pragmatic, honest and street-smart bunch — several were accountants and lawyers and other types of everyday professionals. Estimates place the peak Jewish population between 80 and 120. A little less than 100,000 people live on the island overall. 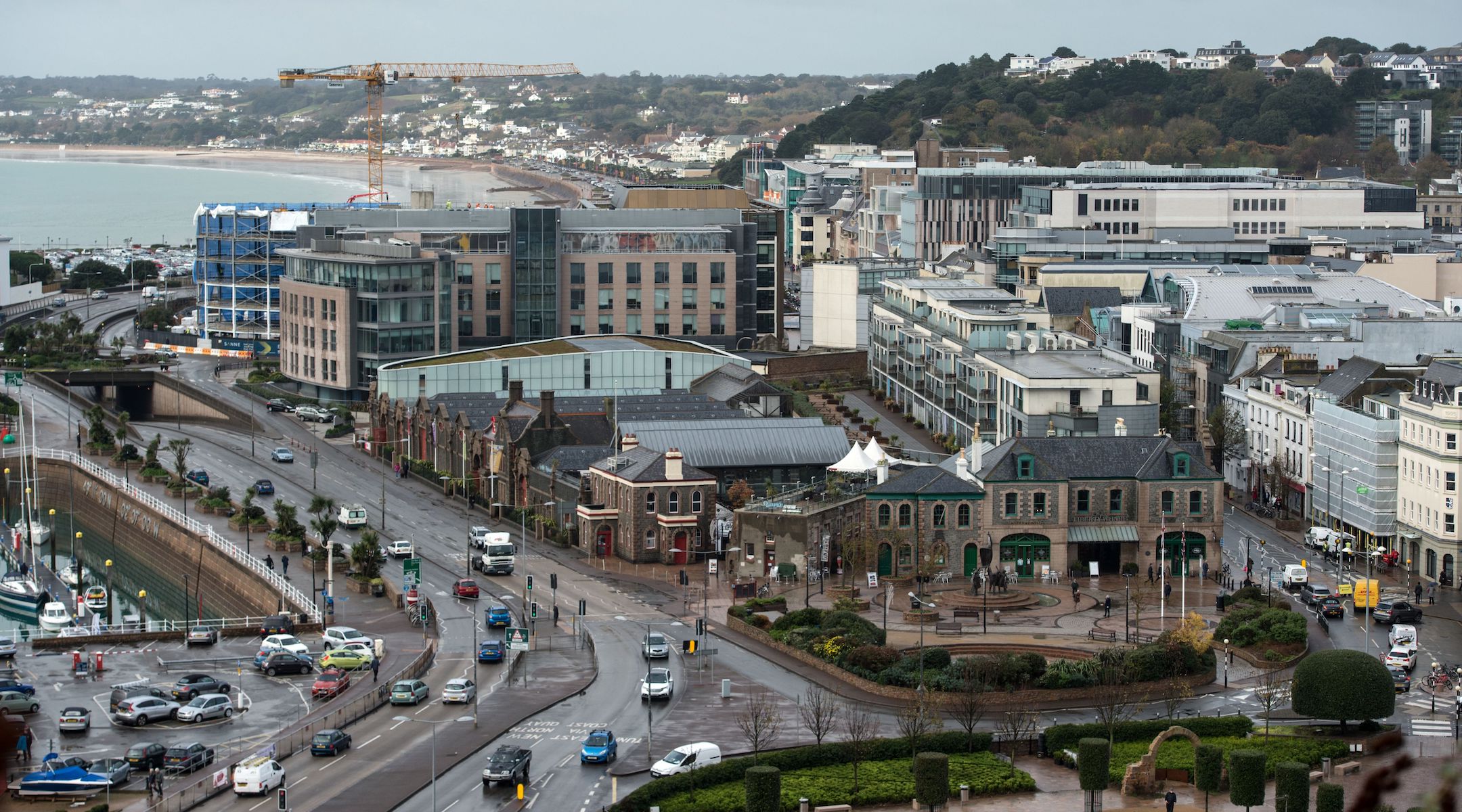 A view of the beach and seafront in St. Helier, the Jersey capital, in 2017. (Oli Scarff/AFP via Getty Images)

“People have died, and people have left. There isn’t much replacement – my own children have left,” said Anita Regal, who was Jersey’s first female lawyer. “It is amazing that we are still going to be honest … we stagger on as best we can.”

Stephen Regal says it’s hard for him to envision the community surviving.

“I am an optimist by nature, but I am also a pragmatist,” Stephen said. “And I see the community struggling going forward to maintain numbers and the skill sets that we need to remain viable as a community.

“There are very few of us over here that can read Hebrew fluently for example,” he added. “When I go, and when some of the others do, who will replace us?”

A much darker time

The Channel Islands are better known among British Jews for another painful period.

Germany’s occupation of the islands from 1940 to May 1945 is often referred to as a “footnote” in the British history of World War II. But the tiny Jewish population that remained on the islands when the Germans arrived, estimated at around 30, were subjected to a string of anti-Semitic laws imposed by occupying forces and administered by British civil servants. 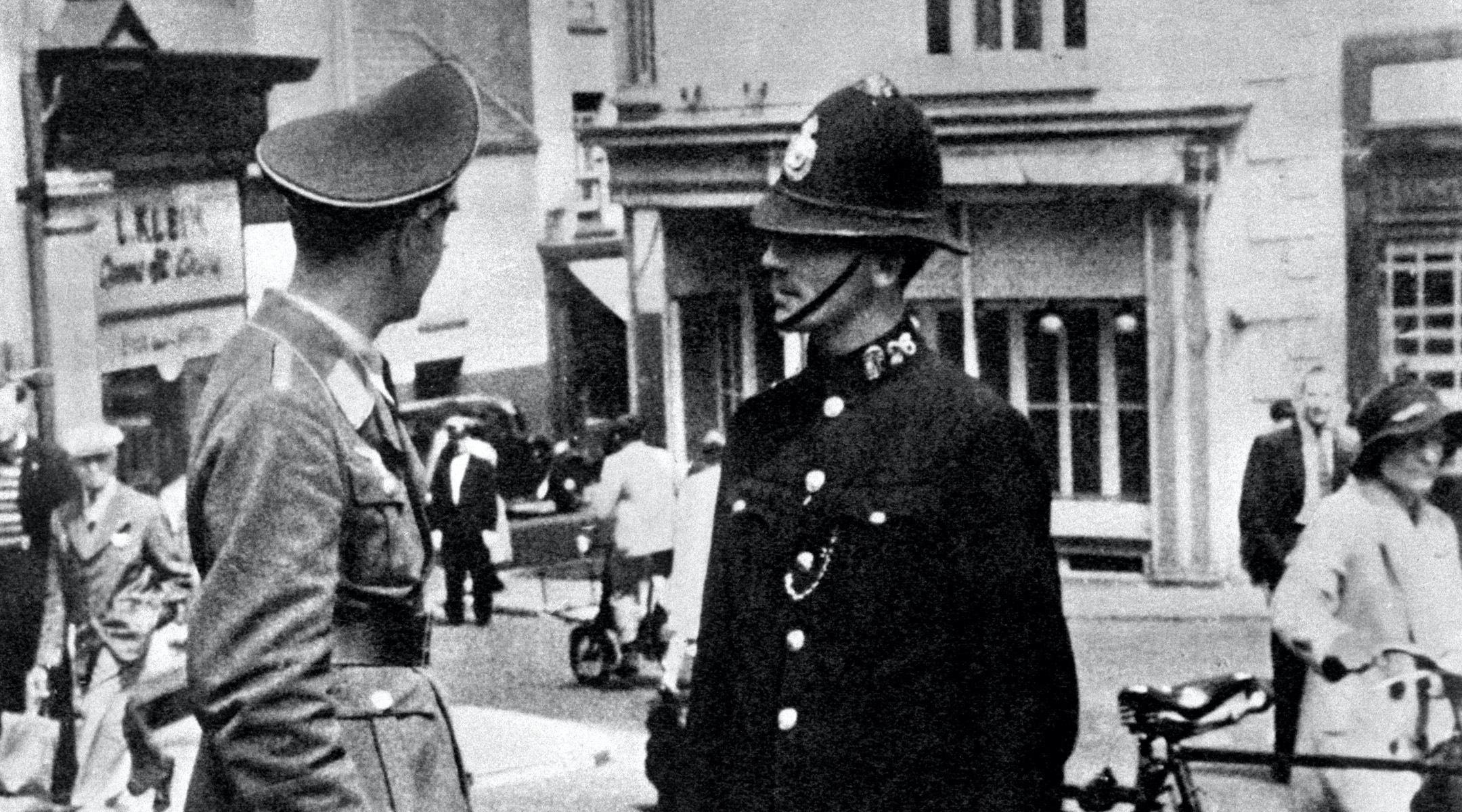 A German Luftwaffe officer, left, speaks with a British policeman in St. Helier, the capital of Jersey, during the German occupation of the Channel Islands. (PA Images via Getty Images)

In Alderney, a smaller, even more remote islet a few miles from Jersey, a stone bearing inscriptions in English, French, Hebrew and Russian hints at this history. Labor camps were set up there, and thousands of slave laborers, including hundreds of French Jews, were forced to work — many to death — building Hitler’s Atlantic Wall, which was designed to make an invasion of Europe all but impossible. Steel skeletons and concrete remains of bunkers and gun emplacements dot the islands’ coasts.

On Holocaust Memorial Day, the island remembers the 22 non-Jewish resistance fighters who were deported from the island and murdered during the occupation. The group includes those arrested for covertly spreading news gathered from illegal BBC-tuned radios, and a clergyman deported after speaking out against the Germans from his pulpit.

A debate over memory

During the war, three Jewish women arrived on the neighboring island of Guernsey as refugees from Austria and Germany, but were deported to France in April 1942. From there, they were sent to Auschwitz.

Jersey has been quicker at reckoning with its wartime past than Guernsey, which celebrated its first Holocaust Memorial Day in 2015. Its small plaque to the three Jewish women murdered in the Holocaust was erected in 2001 and has been repeatedly vandalized. A small lighthouse memorial stands on Jersey for the three Guernsey deportees.

After the war, rather than seeking to punish those who facilitated the German occupation, as postwar collaboration trials did across Europe, the British government quietly let the matter slip. Honors were bestowed on the islands’ rulers as a token of gratitude for their “protection” of the islands’ populations.

“During the occupation, the bailiff of Guernsey was a man called Victor Carey,” explained Gilly Carr, a historian at Cambridge University. “And the Carey family are recognized as an important family that have often held positions of authority on the island.”

The Carey family is still influential on the island. Victor Carey’s grandson, De Vic Carey, served as Guernsey’s bailiff — or the chief justice of the local court and ceremonial head of the island — between 1999 and 2005.

“[Guernsians] have been much slower” in coming to terms with their past, Anita Regal said.

Martha Bernstein, the secretary of Jersey’s Jewish Congregation, who also runs Jewish education programs in Jersey’s schools, says that while the historical debate has been had in Jersey, there is still a way to go.

“The extent of collaboration on the Channel Islands, I feel, is still something that is not talked about,” she said. “When people try and push at the Pandora’s box, and lift the lid a little, people become edgy.”