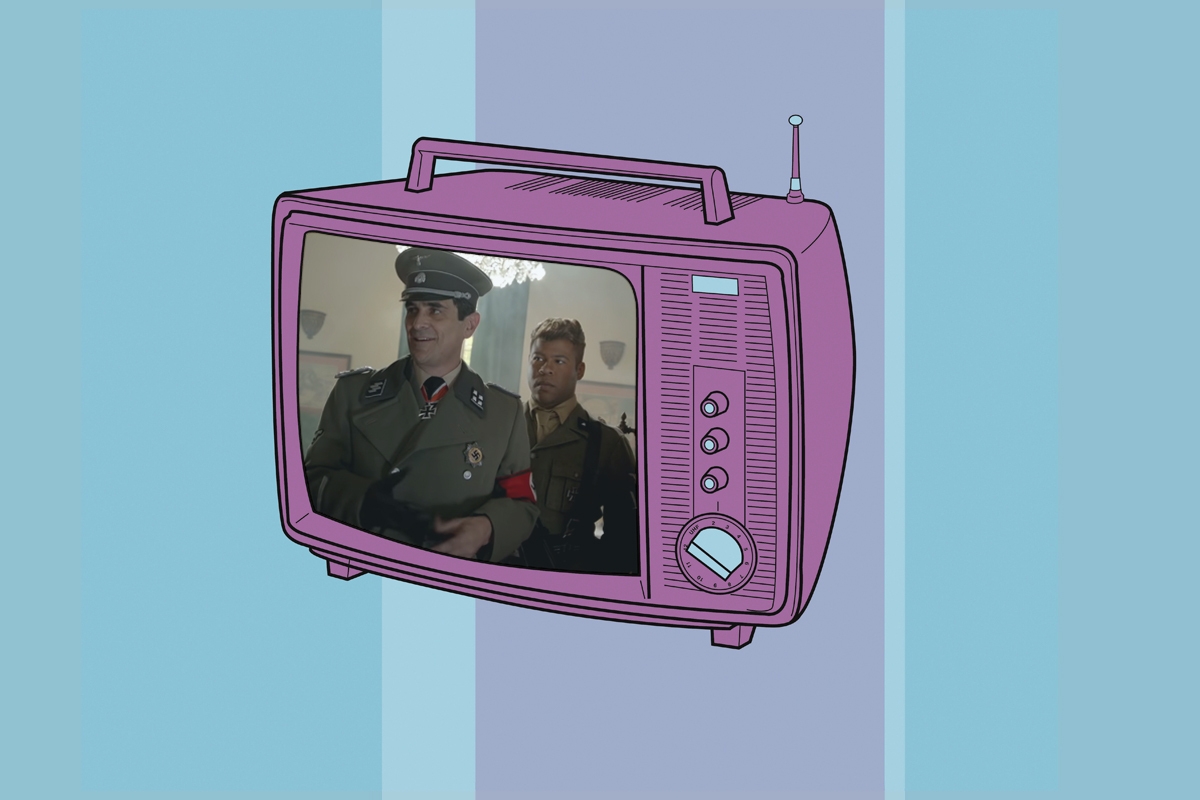 There is an old Yiddish folk saying, “If your heart aches, laugh it off.” For many, this pro-tip especially applies to the Holocaust. When it comes to humor surrounding the topic of the Holocaust, it is critical to remind ourselves that we are not laughing at the severity and devastation of the Holocaust. Rather, as proposed by scholar Terence Des Pres, “[Holocaust] laughter is used to dispel and to embrace, a kind of comic ambiguity that diffuses hostility, on the one hand, and on the other prompts charity toward those who suffered, those who remember, and also those who might simply wish to know.”

Considering the intellectual, educational, creative, and cathartic facets of comedy, it is understandable, even inevitable, that Holocaust humor has become integrated into popular culture. Of course, joking about the Holocaust has the potential to go very, very wrong. But when such jokes are skillfully and mindfully crafted, they serve as a mode of memory transmission with the ability to challenge, enrich, and preserve history.

Don’t believe me? The Holocaust-centered skits, characterizations, and narrative arcs exhibited in these five TV shows explore new ways for Jews — and everyone in our entertainment-focused society — to understand, cope, and heal.

F Is For Family (Netflix)

This animated sitcom loosely based on comedian Bill Burr’s childhood is set in the early ‘70s and centers Nixon-loving Korean War veteran Frank Murphy and his Irish-American family. A period piece of sorts, F Is For Family depicts parenting styles of the era — uninvolved, apathetic, and uncommunicative albeit profanity-laden outbursts. It’s this type of be-home-when-the-street-lights-come-on oversight that leads to middle child Bill’s initial belief that the jovial elderly German neighbor, Otto Holtenwasser, is a Nazi.

Fueled by the neighborhood kid rumors — “He’s Hitler’s little brother and hunts down kids” — Bill is terrified when Mr. Holtenwasser reaches to remove a magnet stuck on his front door and his sleeve slides down, revealing a number tattooed on his arm. “It’s how many people he’s killed! It’s a scoreboard!” Bill cries as he runs away, unaware that his neighbor is a German-Jewish Holocaust survivor, though the audience is able to put it together. “Have a vunderful day children!” Mr. Holtenwaser calls out, waving gleefully. What a sweet old man.

The five-time Emmy-award winning show about Miriam “Midge” Maisel (Rachel Brosnahan), a gregarious upper-class Jewish 1950s housewife turned divorced raunchy stand-up comedian, is already three glorious seasons deep with all eyes peeled for that Season 4 release date (any day now…). Set in the aftermath of World War II, members of the Upper East Side Jewish diaspora live with the recent memory of the Holocaust, but they are only human and some let their egos get the best of them.

In the first episode when Midge’s husband Joel is humiliated from bombing a stand-up set and decides to leave her, he compares his comedy career to their rabbi:

“I’m up there dying and I’m thinking about last week, we’re in temple and the rabbi tells that stupid Sodom and Gomorrah joke, and suddenly the whole synagogue goes nuts!”

“You’re jealous of the Rabbi? He was in Buchenwald, throw him a bone!” says Midge, referring to the concentration camp in Weimar, Germany.

In the second episode, Joel’s yenta father, Moishe, gives a braggadocios dinner toast: “At times of hardship self-sacrifice is necessary. Like the sacrifice I made pulling thirteen Jews out of Germany in 1943.” Everyone’s heads droop and eyes roll at the repetitive story told for clout. A righteous among the nations, or…?

Senior year of college, I was asked to partake in a Drunk History style web series for the new student-run news site where seniors got drunk and talked about their final projects. I declined, worried it would impact future job prospects. But if I had participated, there is no doubt I would’ve resembled the Drunk History season 5 episode “Heroines.” In one of the segments, comedian and self-proclaimed Jew-Jo (“My father’s Jewish, but my mama’s Jehovah’s witness”) Tiffany Haddish tells the story of Rose Valland, a French assistant curator at the Jeu de Paume, who, during World War II, unbeknownst to the art-looting Nazis, spoke German and memorized all the hiding locations of stolen masterpieces “cause [Hitler] mad he didn’t get into university.”

In December 1944, when The Monuments Men (“and women”) arrive to retrieve the artwork, Valland provides them with vital information and “[saves] over 60,000 pieces of culture!” She also snitches on [Hitler’s] main man Herman Göring hoarding 200 million dollars worth of art. “He’s so ratchet!” Haddish says, telling it like it is. She even throws in a little revisionist history: “Hitler killed himself, they say. I think he hanging out with Tupac.”

Keegan-Michael Key and Jordan Peele’s sketch comedy series has been off-air for almost five years now, but the show is still a beloved modern classic, especially “Awesome Hitler Story.” In this Key & Peele sketch, Modern Family’s Ty Burrell reprises his Season 1 role as SS Colonel Hans Mueller. When three stray U.S. soldiers are ambushed by Nazis in an abandoned hotel, the only unscathed soldier (Key) plays dead while Commander Mueller, who’s meant to be securing the hotel, gets distracted telling a dutiful SS solider (Peele) an awesome story about running into Hitler at the market (“It was the weekend, and the little hairs on the side of his mustache were starting to grow”).

Key, hungry and irritated by sunlight, wiggles around and sneaks a bite of his chocolate ration. Peele sees everything and tries warning Commander Mueller. “Do you speak during the cinema? The story has a build!” Too ignorant and irritated by his soldier’s insubordination, Commander Mueller shoots Peele and continues telling the other SS the best part of story. “As Hitler was taking his leave of me he said, ‘Well there’s no point in getting bread if you’re not going to get’ and at the same time Hitler said cheese, I said cheese, and Hitler and I both said, ‘Jinx!’” Ordinary men, indeed.

It’s been a little over a year since the series finale of Crazy Ex-Girlfriend, a musical comedy created by and starring Rachel Bloom as ivy league-educated lawyer and hopeless romantic Rebecca Bunch. Two of the shows main themes are mental illness and Jewish identity, and both are explored in the song “Remember That We Suffered,” co-written by the late Adam Schlesinger. In the episode, Rebecca returns home to Scarsdale, New York to attend her cousin’s bar mitzvah and tries explaining to her non-Jewish boyfriend Josh that “people like us [i.e. Jews] only know how to be miserable” while he joins Rabbi Shari (Patti LuPone) and Rebecca’s mom, Naomi (Tovah Feldshuh) singing to the tune of “Hava Nagila.”

In the song, the guests remind themselves of how much the Jewish people have suffered, mentioning iconic Jewish cultural figures like Barbra Streisand and Steven Spielberg, music groups the Beastie Boys and Haim, and the one and only Adolf Hitler. The mention of these first four individuals isn’t just meant to be a marker of Jewish success and influence in the entertainment industry, and the last isn’t included just for shock. These cultural references serve as an aide to exploring the concept of inherited trauma — epigenetics — and Holocaust memory contained in the lyrics. The messages relayed in “Remember That We Suffered” are of awe and respect for the past, yes, but also one of autonomy and resilience, which is why Rabbi Shari leaves a glum Rebecca with, “Our people are not responsible for your life. You are.”