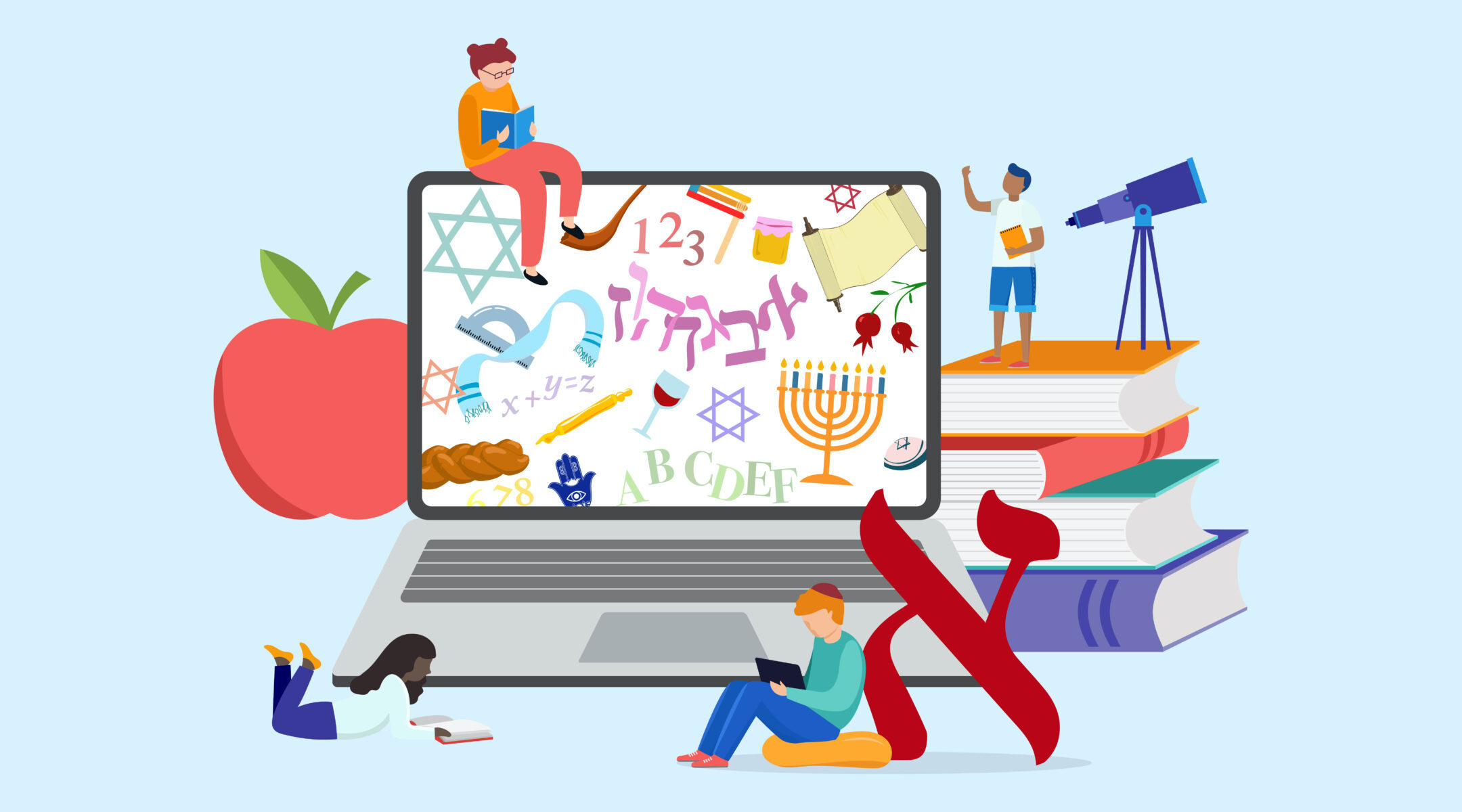 (JTA) — The pandemic lockdown was just weeks old when Jonah Rank first realized he wouldn’t be sending his daughter to kindergarten as planned.

Rank and his wife, both Conservative rabbis, moved from Nova Scotia to southeastern Pennsylvania a year ago in part because they wanted to be able to send their children to a Jewish day school. But as the coronavirus pandemic hit the United States, the school — like nearly all others — closed temporarily.

Looking ahead, Rank concluded that because he and his wife work with many people who are immunocompromised, they would not want their children in school until a vaccine was available.

In early May, he sent out a beacon to his thousands of Facebook friends.

“Are you worried about sending kids to school physically next year?” Rank wrote. “If you’re interested in Jewish education amidst all this, let’s talk; I’m building a network now.”

At the time, Rank may have sounded like a pessimist: Many summer camps hadn’t even been canceled yet. With the disease appearing to be in retreat in most places, the idea of an online fall semester seemed far-fetched. 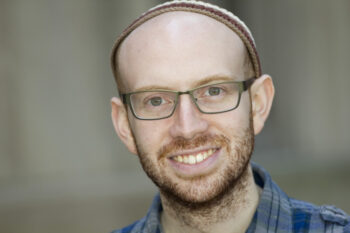 Rabbi Jonah Rank was inspired to create Yesod after realizing he would not feel safe sending his daughter to kindergarten in person. (Courtesy of Rank)

But now, with the disease widespread and schools across the country reopening online, Rank looks more like a prophet. And the conversation he began that day has yielded the outlines of an online Jewish elementary school program: Yesod, or foundation in Hebrew.

Rank is still ironing out the details around Yesod, which will be nondenominational and run from pre-kindergarten to fifth grade. But he has taken steps to incorporate a legal nonprofit, convening an 11-member board to develop a program that he sees as a structured, supported and most of all social approach to homeschooling. He’s also put out a call for teachers, for Jewish and secular studies.

And while registration won’t open for a few weeks, Rank says hundreds of parents have expressed interest. He expects the student body to number about 50 — including his daughter, who would otherwise have had to exercise a remote learning option for a day school that plans to hold classes in person.

“Knowing that we would not have our local day school quite be an option unless we were to have our eldest be possibly the only kid on a computer, which sounded like a terrible idea, I knew I had to do something,” Rank said.

Yesod represents one of countless efforts by enterprising parents trying to manage uncertainty around schooling that would have been unimaginable just six months ago. Driven by safety and financial concerns, some parents with means are forming micro-schools or “pandemic pods,” small groups of children learning together in private homes, sometimes with privately hired teachers. Others are exploring homeschooling for the first time.

Many others are gritting their teeth and hoping for the best at public or Jewish day schools that are either seeking to open with precautions, often on a limited schedule, or planning to operate online only.

Yesod also represents the way that the pandemic is giving rise to educational models that could be testing grounds for long-term changes to how Jewish education is delivered.

Until now, the only virtual school options for non-Orthodox students have been supplemental, not meant to supplant school enrollment. While Rank does not envision the one he is launching as a replacement for the traditional day school, the longer the pandemic wears on, the more likely it may be that parents experience upsides to helping their children engage in communal learning online — especially when it comes with a relatively low price tag of at most $10,000.

Paul Bernstein, the CEO of Prizmah: Center for Jewish Day Schools, which works with more than 300 day schools and yeshivas across North America, says he is encouraged by innovation happening around virtual instruction in Jewish educational settings. But he said virtual-only instruction can fall short in a number of ways, including not being able to provide socialization for children or create a community in the same way that in-person ones can.

“I embrace the innovation and I just encourage those providing the education and also the families choosing education to really consider the full mix of academics, social, emotional and community that a school represents,” Bernstein said. “At the moment I think the best model is a school as we currently know it, with a mix of physical and online.”

Most Jewish day schools are hoping to open for at least some in-person instruction in the fall, Bernstein said. But they know that could easily change.

“Everyone is planning for ideally being in person, being ready to be online either at the beginning or at certain points in the year, [and] even if you’re in person you need to be prepared for the fact that some of the faculty and some of the students may not be able to be themselves in person,” he said.

That’s exactly the scenario that Rank said was driving parents to express interest in Yesod.

“We are primarily getting concerns from families where the day school is planning on reopening for as long as they can be open and then going virtual again and it’s not stable enough for what these families need,” he said.

A typical day for students at Yesod will look something like this: School will start at 9:50 a.m. Eastern time, when students will join their cohort — others in their grade and perhaps another — for a 30-minute lesson with a teacher.

They will then spend an hour in a “beit midrash”-style Zoom with students of all ages working on assignments they received in their lesson. Teachers will be available to provide assistance, and students can join smaller breakout rooms to work together with others in their grade.

Rank and the board members consulted a number of curricula when developing the plan for Yesod. They include standards for Jewish learning developed by Mechon Hadar, an egalitarian yeshiva in New York, and Beit Rabban, a day school in New York, as well as secular standards.

Much of the secular subjects will have children examining their own homes and communities in a pedagogical approach that asks students to draw on their own experiences as they construct knowledge.

Designing the curriculum has come with a set of challenges, said Hannah Hofrichter, a Houston-based board member who works as a private tutor both in Jewish and secular subjects. The challenges include having to design a curriculum that will be taught completely online as well as having to do so prior to having an enrolled student body.

“We don’t necessarily know where the student body is coming, what their backgrounds are. It’s a lot of things that are a little bit up in the air,” said Hofrichter, who is still figuring out where her 7-year-old daughter will enroll in the fall.

Rank will soon be hiring four teachers and four instructors who can provide guidance during the beit midrash portion of the day (some of the roles could potentially overlap, he said). But the rabbi says he is not planning to be part of the staff in the fall. Instead, Rank will continue to run the religious school at Kehilat HaNahar, a Reconstructionist congregation in the Pennsylvania town of New Hope. That, too, will be completely virtual.

One significant difference between Yesod and a traditional day school is the tuition. Yesod will operate on a sliding scale model with the full recommended tuition at $10,000 per child per year, less than half the average cost of $22,910, according to Prizmah’s 2020 report.

“We will cost less than just about any day school option in the United States,” Rank said. “We will also cost basically what families can afford because we don’t want safety to have a hefty price tag.”

Those who cannot afford the recommended price will be able to pay less as well as receive financial aid. There will also be an option for parents to pay significantly less to just receive the curriculum and assignments and teach children on their own or participate in just some of the daily sessions.

“It doesn’t compete with an eight-hour school day where the parents drop the kids off and they’re actively engaged in either teacher-directed or student-directed learning all day,” she said. “This will require some parent engagement.”

Initially, Rank had planned for Yesod only to run for the upcoming academic year. But he says it may run longer depending on how the pandemic develops.

But does he see Yesod outliving the pandemic?

“It would be lovely to learn that it’s such a powerful experience for the students to be in the particular [cohorts] that they will be learning in that they will want to stay learning peers with the kids that they meet through Yesod, and it will be lovely if kids really adapt to learning online very well and responsibly,” Rank said.

“But if there’s a very good option for my kids one day learning in person in a Jewish day school, I would love for that experience to be possible for them, too.”