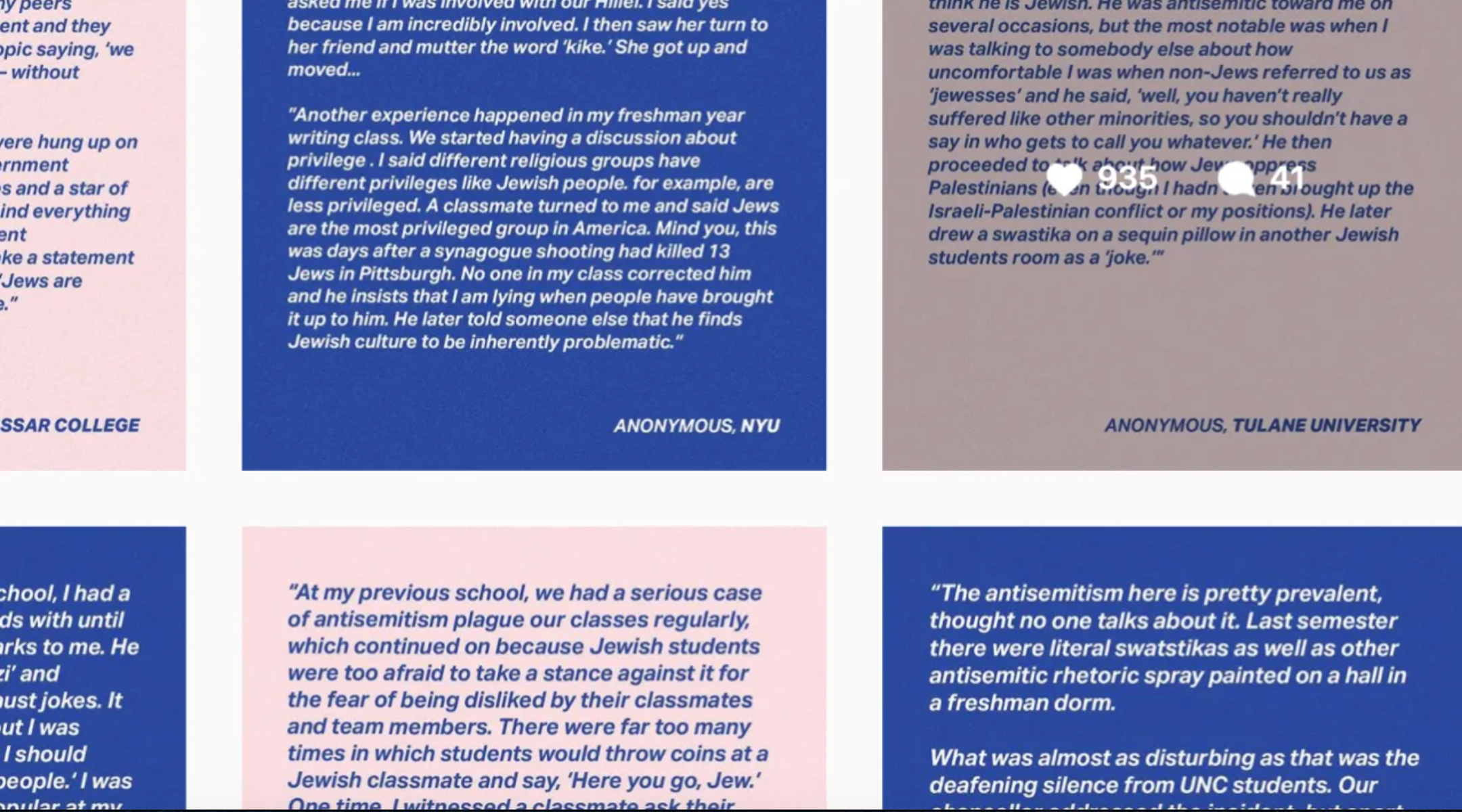 A screenshot of Instagram posts from the Jewish on Campus page. (J. The Jewish News of Northern California)
Advertisement

(J. The Jewish News of Northern California via JTA) — A graduate student’s Jewish facial features mocked. A classmate saying Jews play the “minority card” to get into college. Swastikas drawn on the doors of Jewish students’ dorm rooms.

These are some of the stories shared on a new Instagram account, Jewish on Campus, which collects the anonymous anecdotes of Jewish students across the country who have experienced anti-Semitism in college.

Since it was created in early July, the page has garnered nearly 13,000 followers with more than 130 stories posted, recounting everything from a professor who teaches anti-Semitic canards to a mezuzuah repeatedly being ripped off a dorm room’s doorframe.

The page’s creators say they want to “provide a safe space for Jews of all backgrounds to speak up against anti-Semitism on college campuses,” conveying the breadth of anti-Jewish sentiment on campuses nationwide and showing that colleges and universities have not done enough to address it.

“My hope is to make more students heard on campus,” said Zohar Levy, a student at Stanford University and outreach coordinator for Jewish on Campus. “We are here to tell a story.”

Among the some 800 submissions (not all are posted), about two dozen California schools are represented, according to data provided by Jewish on Campus. In Northern California they include the UC campuses in Berkeley and Davis, Sacramento City College, the College of Marin, University of San Francisco and Stanford. Nationally, stories have come from hundreds of universities, including major institutions such as Columbia, Brandeis, Penn State and Harvard, to smaller schools such as Palm Beach State College and Harper College in Illinois.

Students who want to make a submission fill out a Google form with a description of the specific incident, the name of their college or university and whether the institution responded in some way. Neither the contributors nor the individuals involved are named, so people can post freely without fear of repercussions.

A team of 17 student volunteers fact-checks and vets the stories before they are posted, according to Julia Jassey, one of several co-founders and a student at the University of Chicago.

In addition to stories about anti-Semitism, Jewish on Campus posts about other topics — probing, for example, why Zionism has been “demonized” and “misconstrued” in popular media. Jewish on Campus, which describes itself as a “bipartisan Zionist group,” also hosts a less visible Zionist on Campus Instagram page with educational posts about Israel.

The page’s most popular post is one that calls out anti-Semitic conspiracy theories shared by the British rapper Wiley. That entry had over 19,000 likes and 1,600 comments. 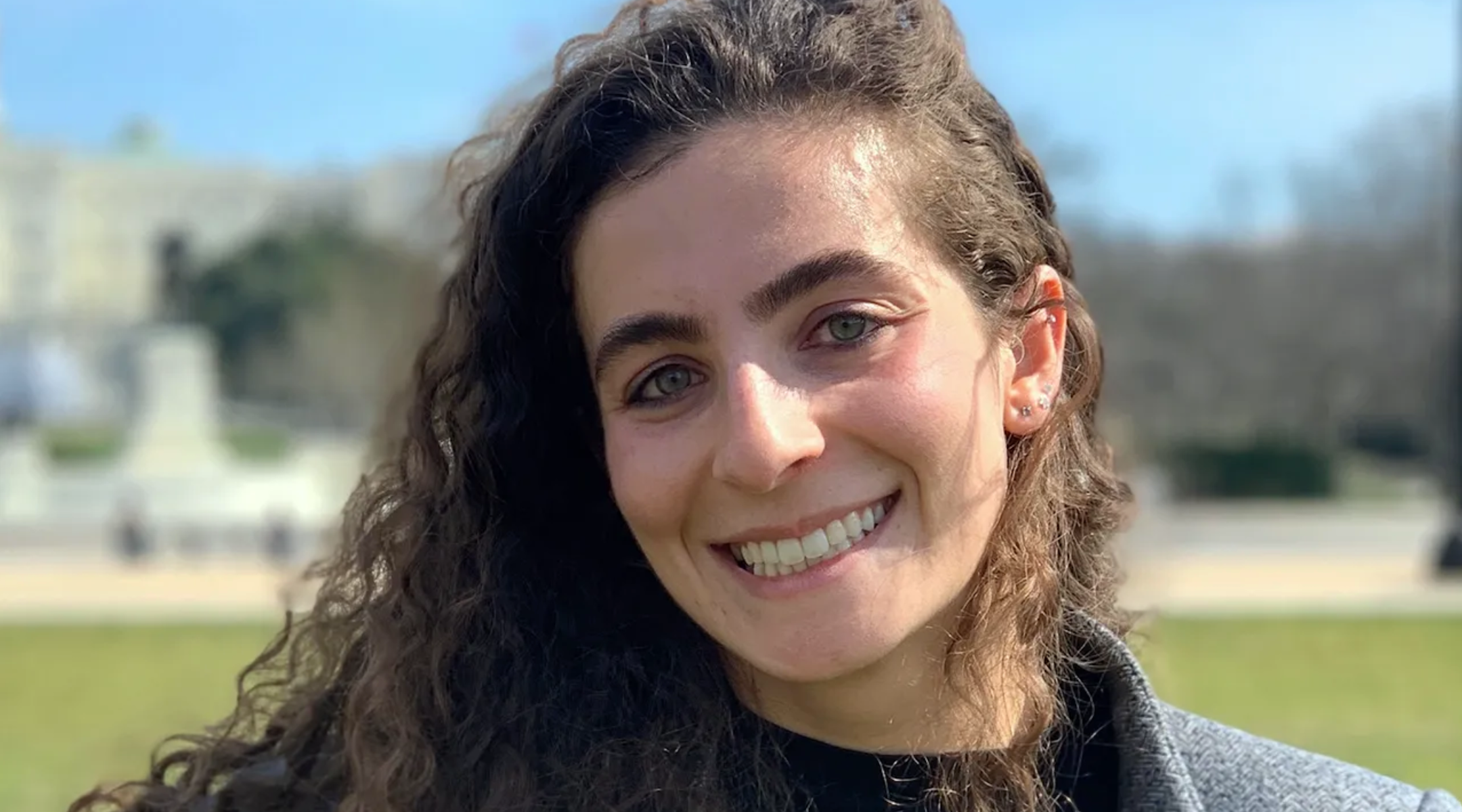 Stanford student Zohar Levy is the outreach coordinator for Jewish on Campus. (J. The Jewish News of Northern California)

Levy, a rising junior studying linguistics, said she has experienced and seen anti-Semitism at Stanford, citing the discovery last month of swastikas drawn in a hallway of the on-campus Memorial Church. (Stanford President Marc Tessier-Lavigne condemned the swastikas and called them a “symbol of hate” in a statement to the student newspaper.)

One of Levy’s tasks as outreach coordinator is contacting Jewish organizations and asking them to share posts from the Instagram page to disseminate them more widely. She’s been in touch with the American Jewish Committee, World Jewish Congress, Israel on Campus Coalition, Committee for Accuracy in Middle East Reporting in America and the Combat Anti-Semitism Movement.

The idea for the page came from Isaac de Castro, a Cornell student. On July 6, he tweeted “Jewish college students, we should make one of those accounts where we post all the antisemitics — we’ve encountered anonymously.” In a follow-up tweet, he invited people to follow his newly created Instagram account.

Jassey, one of seven student leaders helping to run Jewish on Campus, said they are considering applying for nonprofit status so they can fundraise and turn Jewish on Campus into a more expansive organization that would “defend Jewish students whose voices aren’t being heard.”

One forum for that expression is a new blog in which students can write essays about broader topics, like how a woman’s ultra-Orthodox practices helped her cope with sexual assault. While the author’s names are displayed on the first three published essays, Jassey said anonymous blog posts are also being accepted.

As with any conversation surrounding anti-Semitism on American college campuses, the Jewish on Campus founders said there has been some backlash.

Jassey said she’s received direct messages from fellow students at her university who have criticized the idea. Some, she said, have called out the page’s contributors as “just white people complaining.” (Estimates for the number of Jews of color in the U.S. range from 6% to 15% of the Jewish population.)

There was also a slew of derogatory comments on the post about the British rapper Wiley, such as “Destroy Israel” and “Jews are not oppressed y’all got reparations so long ago keep it pushing please.”

“It just comes with the job,” Jassey said in response to the Wiley post. “We want to be loud and proud of our Jewish pride movement.”

The Jewish on Campus model resembles other Instagram accounts that have popped up recently where students who are Black, LGBTQ or sexual assault survivors anonymously submit stories of discrimination they’ve faced at college. Jassey said she is grateful for the inspiration these pages have provided to the Jewish on Campus endeavor.

“Thank you for showing us the power of that,” said Jassey, crediting the creators of the other accounts. “We’re all in it together.”