‘We were on top of the world’: Pandemic shatters kosher Polish cafe’s success and a husband-wife reunion 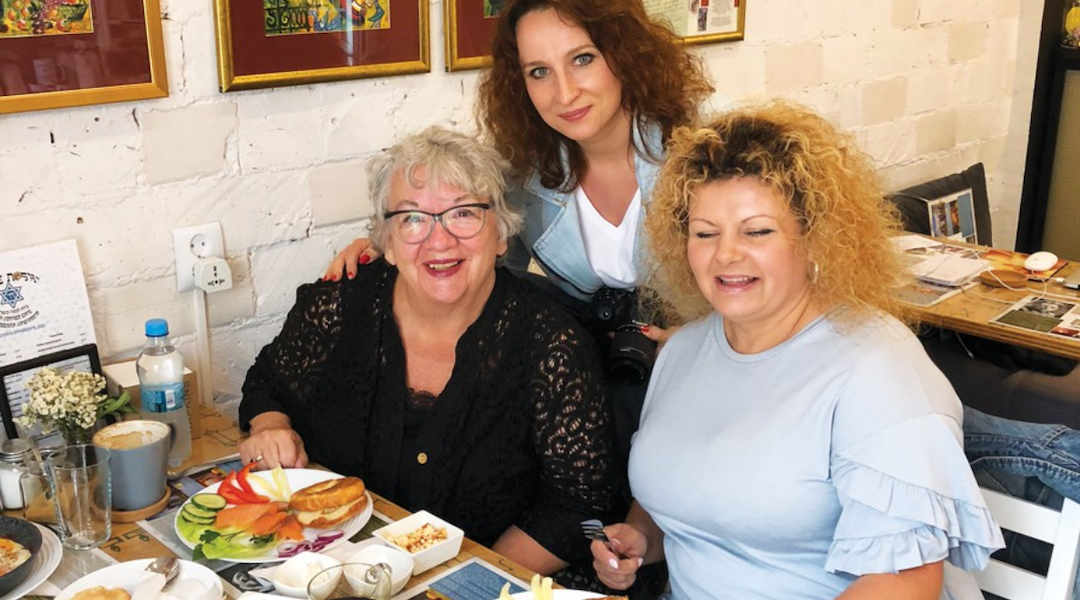 Patrons at The Nosh Kosher Cafe in Tarnow, Poland, pre-pandemic. (Courtesy of the Vineberg family)
Advertisement

(Jewish Press of Pinellas County via JTA) — Marcia Vineberg was nearly packed and ready to rejoin her husband.

They had moved from Vancouver, Canada, to Palm Harbor, Florida, 10 years ago to care for her mother, who had fallen. Harriet Rand, 95, died in December.

Gerald Vineberg, a Canada native who spent half of each year as a businessman traveling in Europe and Asia, wound up opening The Nosh Kosher Cafe in Tarnow, Poland, three years ago.

Marcia, 69, has been trapped in Palm Harbor, she said, because Poland, part of the European Union, has barred Americans from entry.

Gerald, 72, couldn’t return to Florida if he wanted to because President Donald Trump has banned people from Poland and elsewhere from entering the United States.

And the restaurant that had been thriving is in danger of going under now that tourism to Tarnow has dropped to a virtual crawl.

“My grandparents came from Tarnow,” Marcia Vineberg said. “They left just before World War I. My great-grandparents told them to go. They went to New York and then to Orlando. Their children, my father and his siblings lived in Orlando for a while. …

“My husband was doing business in Krakow about four years ago and I told him, ‘If you have a little bit of time, see where Tarnow is and check it out, tell me what kind of town it is.’ It’s about an hour away from Krakow and he had some time off so he went and fell in love with it.”

Gerald, speaking by phone from his apartment in the city, said Tarnow was 45% Jewish before World War II and 80% of the businesses were owned by Jews.

“It’s a fascinating town. People are very welcoming,” he said.

“Marcia and I had become very involved in fundraising for the restoration of their Jewish cemetery. It’s the third largest in Poland.” The cemetery had been desecrated during and after World War II and ignored by the communist regime afterward. Marcia’s great-grandparents and many aunts, uncles and cousins are buried there.

“And we discovered that most Orthodox or Conservative tours that came from Israel, from Great Britain, from Canada, from the United States or wherever did not stay in Tarnow,” he said, “because there was nowhere for them to get a kosher meal.”

Gerald Vineberg had never been a restaurateur. Still, he invested their life savings in opening The Nosh Kosher Cafe and put 2 1/2 years into building the business, not unusual for a restaurant. It serves fish and vegetarian dishes and has its own bakery. Most of the recipes are from Marcia’s grandparents.

“We tried to have it super-duper Orthodox,” she said, “but we can’t. There’s not enough groceries and not enough people to light the fire (on Shabbat) and do everything. We’re finding Conservative and Reform come to dine and the Hasidim and Chabad will come and eat Ben and Jerry’s ice cream, but that’s it.”

By December they had more than 25 group reservations, some with as many as 80-90 students. A museum in Krakow planned a major conference at the cafe and the JCC in that city routinely sent groups. Some patrons have told Gerald that they lived in Tarnow as children and left when their parents fled before the war.

“We were on top of the world,” Gerald said. “But [the pandemic] has destroyed it all, pretty much put it under. Virtually all the tours and other groups had to cancel.”

In May, Marcia Vineberg created a GoFundMe account, hoping to help keep the restaurant afloat through the crisis. At the end of July, the effort had netted nearly $1,300 toward its $20,000 goal.

Marcia had visited Tarnow each June for the past three years – until this one. Now she’s planning to move back to Vancouver because it will afford her a better opportunity to get to Poland.

If The Nosh Kosher Cafe ultimately fails, Gerald said, he’ll probably return to Vancouver. And if it can survive the pandemic, he hopes to eventually sell it.

“My life in many ways is here now,” he said, “and I’m not quite sure what I’ll do if I’m faced with that decision [to stay or leave, to sell or keep the cafe]. Every Friday when I make it through one more week I say ‘thank you for that,’ and then see if we can survive for one more week. That’s how it’s been for more than two months.”