Why Rabbi Joshua Stanton, a lifelong Democrat, is speaking at a Republican convention (but not that one) 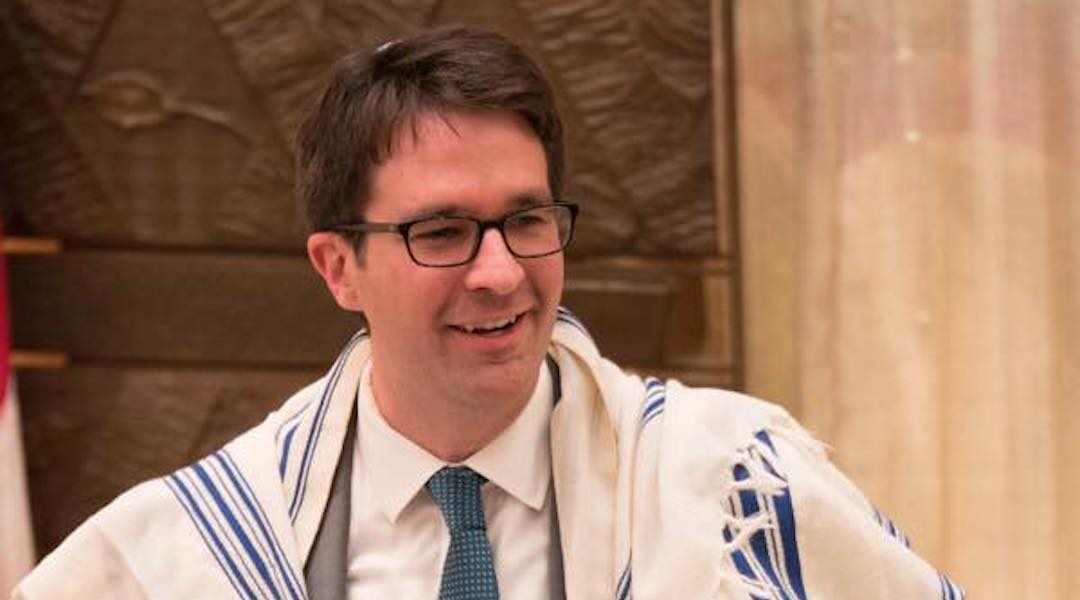 (JTA) — As a lifelong Democrat, Rabbi Joshua Stanton did not imagine that his first appearance at a political convention would be one virtually attended by more than 12,000 Republicans. But that’s exactly what will happen Monday evening when Stanton offers an invocation at the Convention on Founding Principles.

The conference bills itself as a moderate alternative to this year’s Republican National Convention, which is taking place at the same time. Many of the speakers are Republicans or former Republicans who are disaffected with the party under President Donald Trump, including ex-FBI director James Comey; ex-CIA director Michael Hayden; Michael Steele, who served as RNC chairman; and Mark Sanford, a former governor of South Carolina.

Stanton, the rabbi at East End Temple, a Reform synagogue in Manhattan, and a senior fellow at Jewish pluralistic think tank Clal: The National Jewish Center for Learning and Leadership, will deliver a short invocation alongside a number of other faith leaders ahead of a roundtable featuring Comey.

We spoke with Stanton about why he got involved with the event and what he hopes attendees will take away. The conversation has been edited for length and clarity.

JTA: How did you get invited to talk at the convention?

Stanton: A couple of colleagues put my name in the hat, and the convention was looking for clergy and faith leaders from across the spectrum of belief, and I was tapped for it. In some ways I’m an unlikely speaker for the event. I have been a registered Democrat since before I could register to be a Democrat. And even so, I thought it was really important to show up and give words of blessing for an event that is all about change and renewal, themes that are core to our tradition.

Tell me more about why you thought it was so important to show up at this event.

I grew up outside Washington, D.C. My father worked in government finance, with the federal government and also with a variety of think tanks and nonprofit organizations. My mom worked primarily for nonprofit organizations on policies related to children who need state support, children who need Head Start and other kinds of help. I can remember vividly both of my parents working across the aisle to get things done and make our country better. And it’s been a couple of decades since that has been possible in a major way. I seek a return to a time when the interest of the country came first, and it feels like some leaders within the Republican Party have gone so off the rails that that type of cooperation is impossible.

Many of my liberal colleagues are calling for something like an end of the Republican Party. Instead, I’m suggesting that we don’t need to get rid of the Republican Party. It needs to reform and reconstitute itself. We need to strengthen moderates because ultimately if we are going to have political pluralism and pluralism of any kind in our country we have to support moderates, even if they don’t share our own views.

What will you be talking about?

Given that it’s the month of Elul, when we begin our own personal process of reflections, I will be reading from the Book of Lamentations, chapter 5 verse 21, “Return us to you Adonai and we will return, renew our days as of old.” In this time when we are supposed to return to ourselves and find renewal, my prayer is that that can take place not merely on the individual level, but also for our entire society. That we can return to that exceptional optional society that was known for being politically moderate and without extreme poles. That we can return to being a society in which we genuinely care about each other and approach each other with compassion, that we can return to a set of political parties driven by principles and purpose and not the needs of egotistical leaders.

Some congregational rabbis avoid talking or publicly engaging in politics because they don’t want congregants who may have different political beliefs to feel isolated. How do you relate to that?

I resonate to those concerns and so I’m speaking at the convention as a private citizen and a senior fellow at Clal: the National Jewish Center for Learning and Leadership, whose core mission is about pluralism. And as far as the convention itself and my presence at it is about political pluralism, it fits with the core mission of Clal for me to bless it even if I do not endorse a particular candidate for office.

Within my congregation everybody knows I have strongly held views and that they are under no obligation to agree with me. I do not endorse candidates from the pulpit, but I do take stands on issues of policy. My hope is to foster meaningful and deep and loving conversations.

Are you feeling hopeful ahead of this upcoming election?

Following the prior election, I’m filled with a lot of anxiety and I’m taking nothing for granted.

What’s your message to American Jews who may be feeling that way?

Our tradition is remarkably good at empowering individual Jews to take action at times that feel really demoralizing, and right now we cannot stay on the sidelines because this election is too important. It may be the most important of our lifetimes and Jews have been remarkably blessed in the United States to find opportunity and political freedom, and this is an election in which every single one of us must exercise those freedoms and step up and step in politically. We can’t stay on the sidelines because there are no more sidelines.