‘It’s not the same and everybody knows it’: Jewish campus life goes virtual 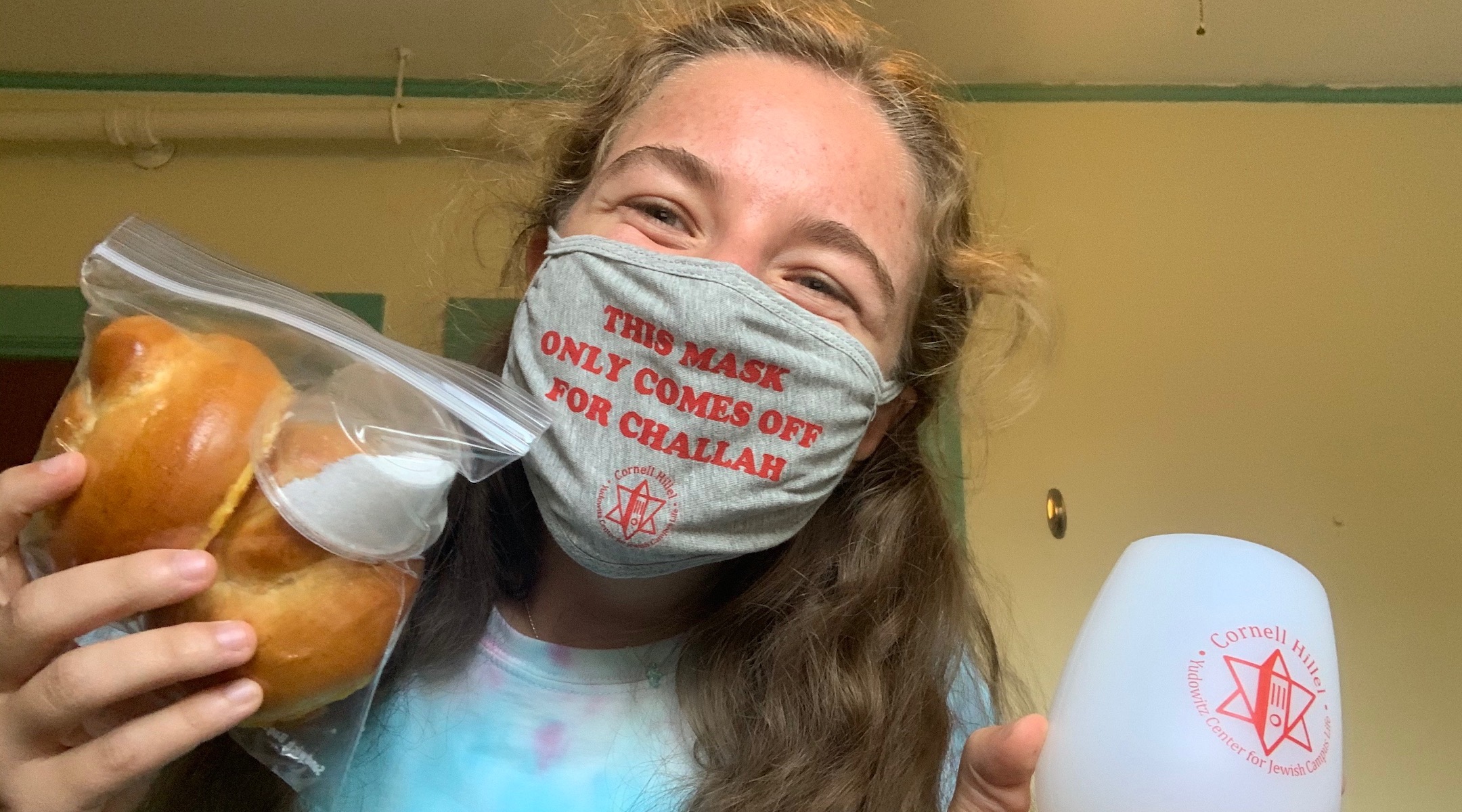 Cornell student Aliza Saunders shows off the supplies she got to celebrate Shabbat on her own. (Courtesy of Cornell Hillel)
Advertisement

(JTA) — When Abigail Adams decided to attend the University of North Carolina at Chapel Hill, she thought she would spend the Friday nights of her first year there at Shabbat dinners on campus with other Jewish students, building a close-knit group of friends.

By the time Adams moved into her dorm earlier this month, she knew those dinners would have to wait: The coronavirus pandemic shut down the campus Hillel building. But she was looking forward to taking part in the small-scale, socially distanced events that Hillel had planned.

Adams didn’t imagine that just one week into the semester, she’d be joining her college’s Shabbat celebration from her bedroom at her family’s home two hours away from campus, trying to make conversation on Zoom with students she had never met in person.

But that’s what happened on Friday after UNC abruptly switched to online-only classes after an alarming number of coronavirus cases were detected among students during the first week of school. Students — other than those with extenuating circumstances — were told to leave their dorms and head home.

Adams, an 18-year-old political science major, hopes to return to Chapel Hill and live off campus with a few other students once the spike has abated, but until then she’s taking online classes and trying to connect with other students virtually. It’s been “difficult,” she said, and online Shabbat celebrations don’t measure up to the real thing.

“It’s definitely not the same because we’re not having one-on-one and smaller conversations,” Adams said.

While some colleges and universities are going completely virtual, others are bringing in students but putting in place stringent social distancing measures. That’s what UNC-Chapel Hill had done before reversing course.

No matter the policy, it’s clear that college — and with it Jewish student life — will look very different this year.

Being involved with Hillel and other Jewish student organizations forms a significant part of the social lives of many Jewish students. At schools with large Jewish populations, Shabbat dinners can draw dozens or even hundreds of students who crowd into a Hillel building or dining hall to eat and schmooze. Yom Kippur services might see a similar number of students crammed into an auditorium or campus chapel, and Jewish sororities and fraternities are usually home to dozens of students living in close quarters. None of that is happening this year. Birthright, the 10-day trip to Israel that is rite of passage for many Jewish college students, is also on hold.

“There’s a real sense of loss,” said Ari Gauss, the executive director of North Carolina Hillel, which serves nine schools in the state, including UNC-Chapel Hill.

In a normal year, Gauss said, UNC’s Hillel would have held high-profile events at the beginning of the year to gain visibility, such as a bagel giveaway in a central location. This year, the efforts are much more targeted and technical.

“We’re doing everything we can trying to be innovative and methodically reaching out directly to as many students as possible, trying to convene cohorts of students online in medium-sized groups so that they can have an ongoing sense of connection to a micro-community of peers,” he said. “But it’s not the same and everybody knows it.” Abigail Adams, sitting in the chair on the right with a white mask, got to attend one in-person Hillel event at UNC-Chapel Hill before the school switched to virtual classes. (Courtesy of UNC-Chapel Hill Hillel)

The radical rethinking of campus life this year is giving rise to some notable innovations. Hillel International, which works with Hillels at more than 600 colleges and universities around the world, is teaming with the arts organization Reboot to produce a splashy High Holiday experience for students and others. On the docket: Kol Nidre by Broadway star Adam Kantor, a Neilah service by the folk band Milk Carton Kids and students from at least a dozen campuses.

At schools that are bringing students back to campus, Hillels are not just revamping how they handle Shabbat meals — they’re also being called upon to support students in new ways.

“Students are increasingly isolated and there’s lots of mental health concerns that we have for students,” said Jen Zwilling, Hillel International’s chief strategy officer. “Our strategy is to be safe, but also to help students not feel so alone or so isolated.”

At Cornell, Hillel staff has found themselves having to counsel students who lost loved ones due to the coronavirus. The Hillel recently hired a new staffer with a social work background who in addition to planning events will be able to join the three rabbis already on staff in counseling students.

“Usually our programming focuses on living a Jewish life fully in a pluralistic setting,” said Rabbi Ari Weiss, Cornell Hillel’s executive director. “One of the things we’ve discovered over the last six months is that we really have to be thinking about even more more basic needs, which is to make sure that our students feel safe and secure and supported.”

Students are in the middle of moving in at Cornell, which is conducting some classes online and others in person. Hillel has been providing “Shabags” — Shabbat-to-go bags featuring a kiddush cup, challah, grape juice and candles — for students who are quarantining as they come from states with high coronavirus rates.

The university’s kosher dining hall, which usually hosts hundreds of students for Friday night dinner, will be operating at extremely limited capacity — only allowing 30 students to eat at a time with everyone sitting 6 feet apart. Once the dining hall is at capacity, students will have to pick up Shabags and celebrate Shabbat outside or in their dorm.

“We’ve been working with dining to capture as much of the Friday night experience as possible,” Weiss said. 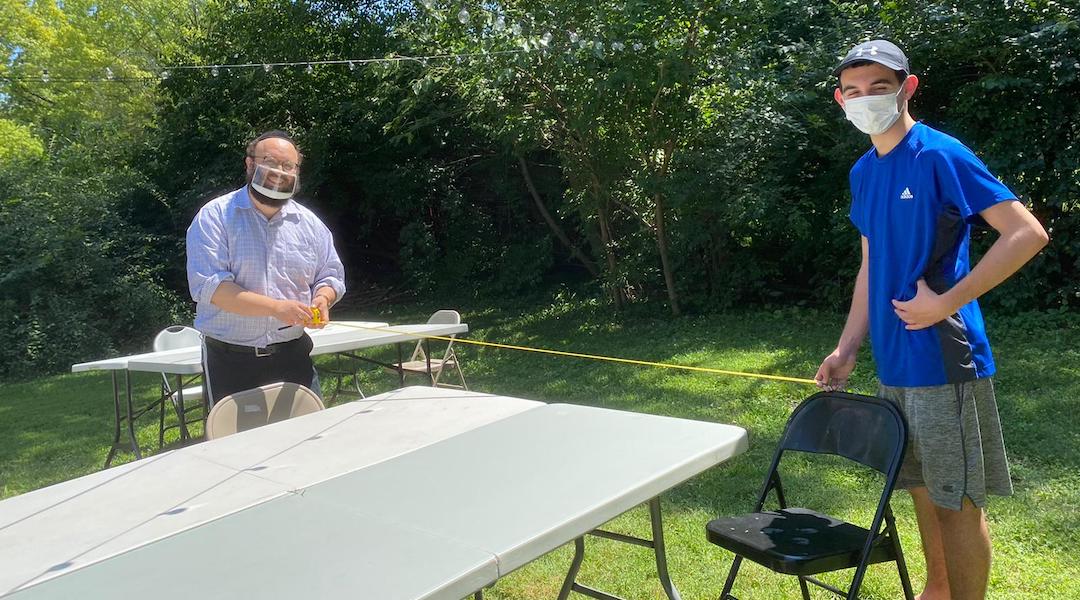 Rabbi Zalman Tiechtel and student Kyle Gold at the University of Kansas measure a 6-foot distance for a socially distanced Shabbat dinner. (Courtesy of Tiechtel)

At the University of Kansas, Rabbi Zalman Tiechtel and his wife, Nechama, have been hosting socially distanced Shabbat dinners for no more than 35 people outside the Chabad house. The couple is providing Shabbat-to-go bags for those who don’t get a spot.

Still, there are some silver linings. Tiechtel has been working with a nationwide initiative, Chabad Cares, to provide resources to students to feel connected to the Jewish community. And while North Carolina Hillel typically hosts separate events for each of its nine schools, the organization has now been holding some joint events, allowing students to make connections across campuses.

“The name of the game this year is going to be flexibility and innovation,” Gauss said.

Though Adams hasn’t been able to make many new friends yet, she found that she has grown closer with several other students at UNC-Chapel Hill whom she knew from her synagogue, youth group and elementary and middle school.

“The few Jewish students that I knew before coming on campus, I’ve connected with them more,” she said. “They aren’t getting to meet many new people either.”