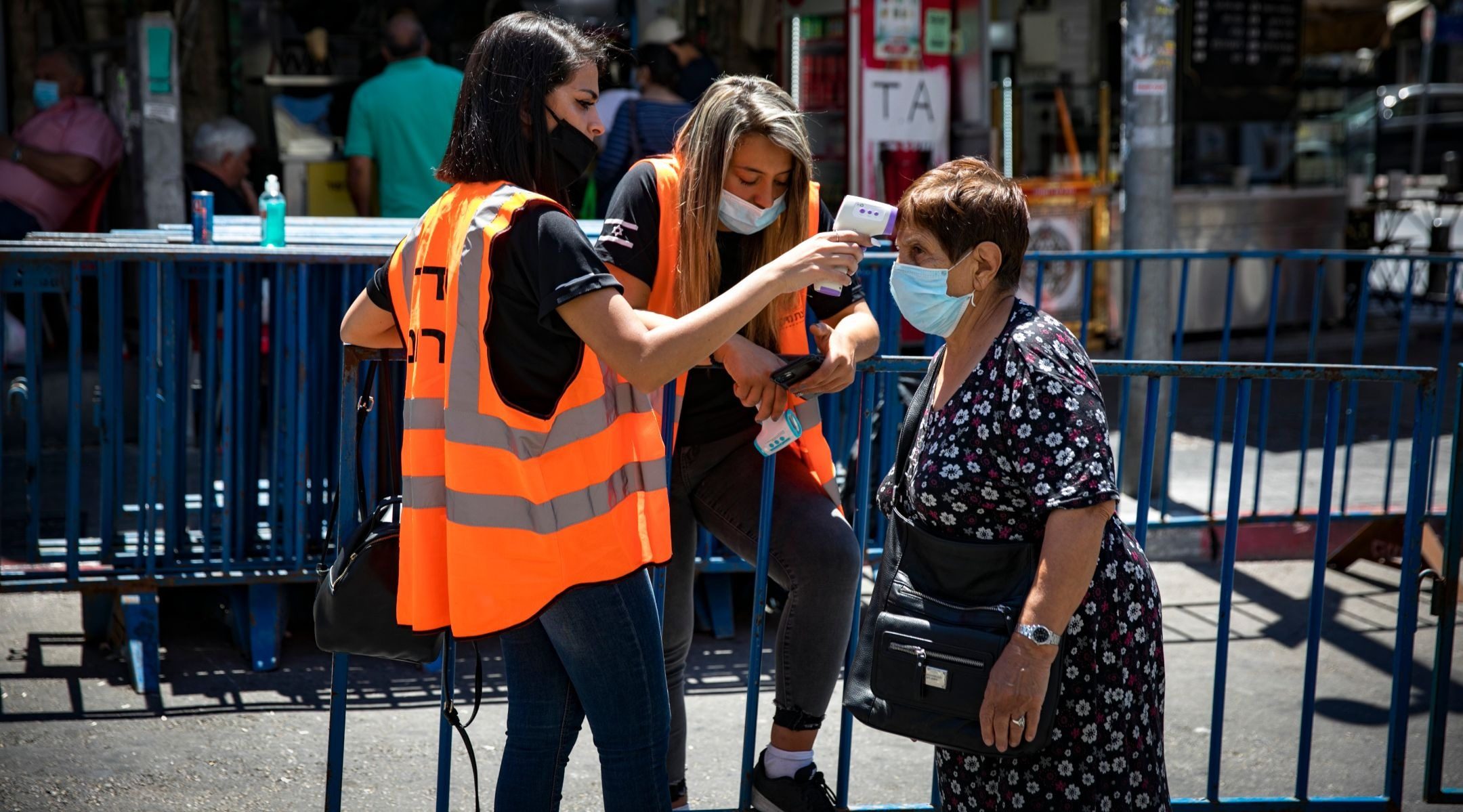 An Israeli woman has her temperature taken before entering the Mahane Yehuda market in Israel, part of a national effort to halt the spread of the coronavirus, June 16, 2020. (Olivier Fitoussi/Flash90)
Advertisement

(JTA) — Israel passed a grim milestone over the weekend as its tally of coronavirus deaths exceeded 1,000.

The country currently has the highest rate of new infections per capita in the world, with an average of 199.3 new cases a day per 1 million residents for the week ending Sept. 2, according to official figures.

A week after schools opened for the year, the government is closing schools and imposing curfews in some 40 cities and towns with high infection rates. People living there will be forbidden people from leaving their homes between 7 p.m. and 5 a.m. and non-essential businesses will be required to close at 7 p.m., although there will be no restriction on movement in and out of the areas.

The government came close to imposing even more stringent rules in some places, with the Cabinet set to approve a lockdown to start Monday on 10 cities and towns, all of them Arab-Israeli or haredi Orthodox. But Prime Minister Benjamin Netanyahu called off the Sunday Cabinet meeting following pressure from the mayors of four haredi towns who threatened to flout the lockdown and withdraw support for Netanyahu.

“The entire haredi public will not forget the injustice being done to it,” the mayors of four haredi cities wrote to Netanyahu in a letter first reported by Times of Israel. “We will not forget who is the man who, time and again, signed onto turning us into disease vectors and enemies of the people through selective punishment of tens of thousands of families in the haredi community. We see in you the lone perpetrator of these punishments.”

Instead, Netanyahu called an emergency meeting Sunday afternoon that included the minister of health and the head of the country’s coronavirus response, as well as two haredi Orthodox ministers, Interior Minister Arye Deri and Housing and Construction Minister Yaakov Litzman, who was until recently the health minister. They landed on the curfew plan for cities identified as “red,” which include the Old City of Jerusalem and eastern Jerusalem neighborhoods.

Netanyahu praised Arab community leaders who he said came to him seeking restrictions to stop the spread of the virus, calling their decision “a sign of responsibility.”

“A red city is not chosen in order to harass or by an arbitrary decision, it is chosen by scientific results and according to the number of patients and the rate of morbidity,” Netanyahu said.

The decision does not preclude a total lockdown of some cities or the whole country for Rosh Hashanah, two weeks from now, according to reports.

Israel’s Channel 12 News reported Sunday that the National Security Council is considering closing the Temple Mount to worshippers, saying that gatherings at the site have spread the virus. Such a closure could lead to violent protests.