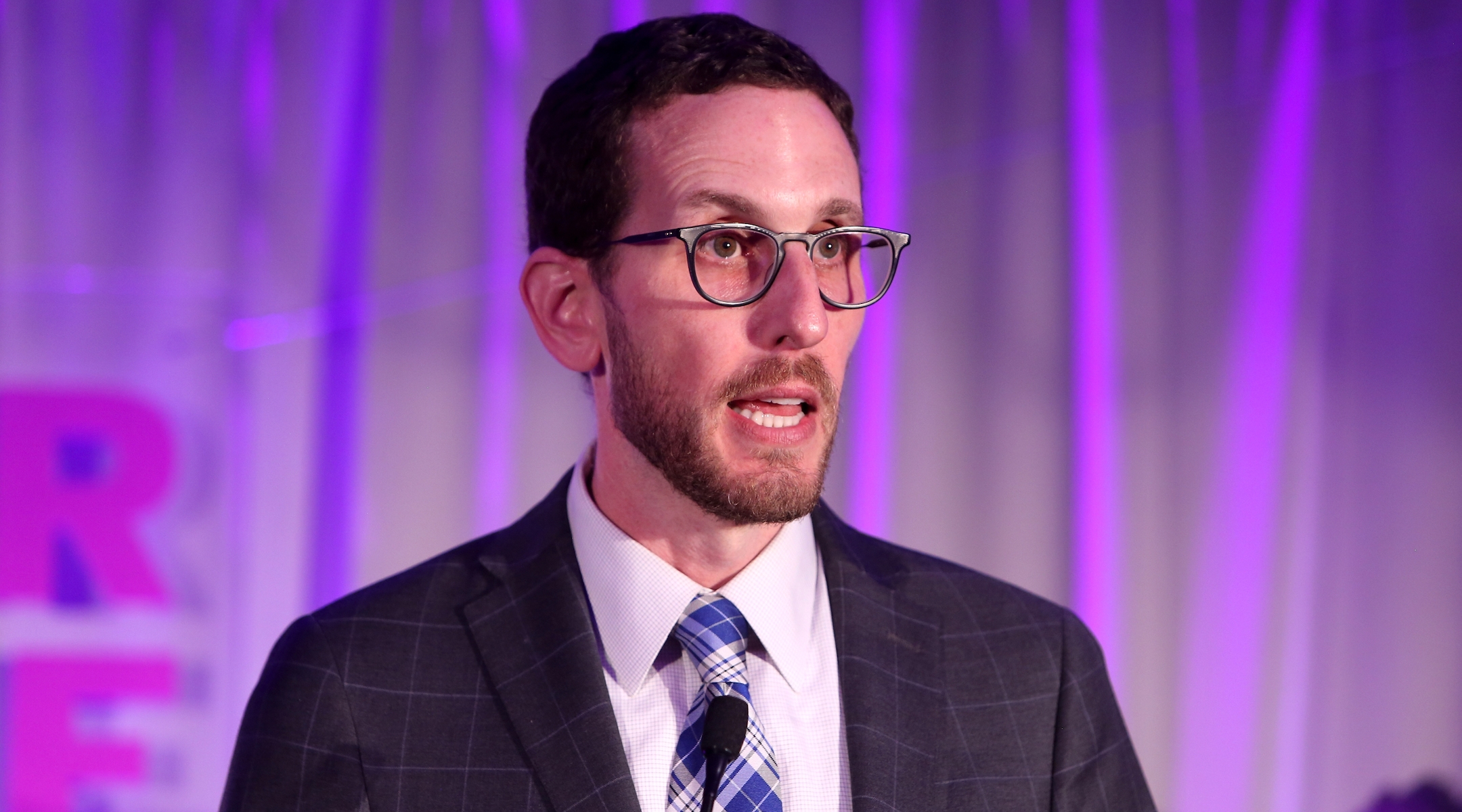 California State Sen. Scott Wiener said his Jewish identity has made him a target before, and he pointed to President Trump’s leadership as a factor. (Randy Shropshire/Getty Images)
Advertisement

(JTA) — This has been a difficult month for Scott Wiener, who represents San Francisco in the California State Senate, and not just because he’s running for reelection.

Wiener has been the target of death threats on social media (“I’ll publicly execute you,” one reads), according to screenshots of posts he shared on Twitter, and says he’s been doxxed, his home address posted online.

And because he’s Jewish and gay, Wiener has borne the brunt of unrelenting anti-Semitic and homophobic comments and posts. One that has made the rounds in recent days before being removed from Instagram featured a crudely doctored image showing Wiener with an elongated nose and wearing the garb and hairstyle of an Orthodox Jew.

The barrage is coming from believers in QAnon, the sweeping, false conspiracy theory that Democrats run a pedophile ring that President Donald Trump is secretly battling. Anti-Semitism, including the claim that rich Jews secretly control the world, is a recurring feature of the conspiracy.

The movement has grown in recent months with people spending more time online, its adherents winning nominating contests for public office and Trump declining to condemn it. In one prominent example, a Republican congressional candidate who has embraced the movement, Marjorie Taylor Greene, won her Georgia primary with the eager backing of the president.

“It’s been really extreme and hard,” Wiener told the Jewish Telegraphic Agency on Tuesday about the onslaught he’s experienced. “It’s been pretty consistent. No matter what I post about, there are an enormous number of comments calling me a pedophile, and it’s very disheartening that this is what the country has come to, that we have this cult, QAnon, that is gradually taking over the Republican Party.”

Wiener, 50, a Democrat who was first elected in 2016, said his Jewish identity has made him a target before, and he pointed to Trump’s leadership as a factor.

“In that world, it’s sort of par for the course,” he said. “You attack the Jews, and that’s been unleashed under this president.”

Why is Wiener being called a pedophile?

It’s because he introduced a bill that removes a disparity regarding who has to register as a sex offender.

The bill, which has passed the State Senate and is awaiting the governor’s signature, does not allow pedophilia.

But its content and author, Wiener, are flypaper to QAnon adherents, who view themselves as part of an imagined global effort to combat sex abuse of children. Opponents are mischaracterizing the measure, falsely saying that it legalizes pedophilia or allows a 24-year-old to rape a 14-year-old without consequences.

Though untrue, the accusations have spread, and mischaracterizations of the bill have been amplified by random social media accounts as well as national figures like Sen. Ted Cruz, a Texas Republican, and Donald Trump Jr.

“Today’s CA Dems believe we need more adults having sex with children, and when they do, they shouldn’t register as sex offenders,” Cruz tweeted on Sept. 3. “This is extreme & very harmful to kids.”

Trump Jr. falsely claimed that California Democrats are “pander[ing] to the wishes of pedophiles and child rapists.”

“SB145 allows adults who have ‘consensual’ sex with a 14 year old to not be charged as sex offenders,” she tweeted on Sept. 4. “It’s a disgusting bill and one that should be promptly vetoed. Call the Governor and tell him to protect kids and veto this bill.”

Wiener says such statements could fan the flames of others who repeat claims like those of Trump Jr. — and then say they want to kill him. He said the vast majority of Republicans in the State Senate have not engaged in such rhetoric, but also that none of those colleagues have stood up for him publicly.

“I wouldn’t expect them to,” he said. “Their party is unfortunately being more and more influenced by QAnon.”

This marks the second time this year that Wiener has been targeted publicly with anti-Semitism. In June, a California trade union posted an ad showing Wiener holding Monopoly money and accusing him of “selling out California.” The ad was later withdrawn.

Wiener, who is not under police protection, said the latest wave of smears has made it harder for him to post on social media — the invective accompanies whatever he posts. One comment said “We need to end jewish zionism and jewish interference in white countries.”

The lawmaker also said he has to be judicious about tagging colleagues because he doesn’t want the abuse to then rain down on them.

The solution, Wiener said, is for social media companies to take a larger role in policing hate speech on their platforms, though he added, “I’m not saying they should be the thought police.” He has no immediate plans to work on legislation to that effect, he said.

In the meantime, Wiener said all he can do is “manage” the hate he receives. While it’s made his life more difficult, he hasn’t given up on politics.

“Politics is hard and there’s a lot of ugliness around it, but with that said, politics is a big part of how we make positive change,” he said. “And so this hasn’t discouraged me at all.”