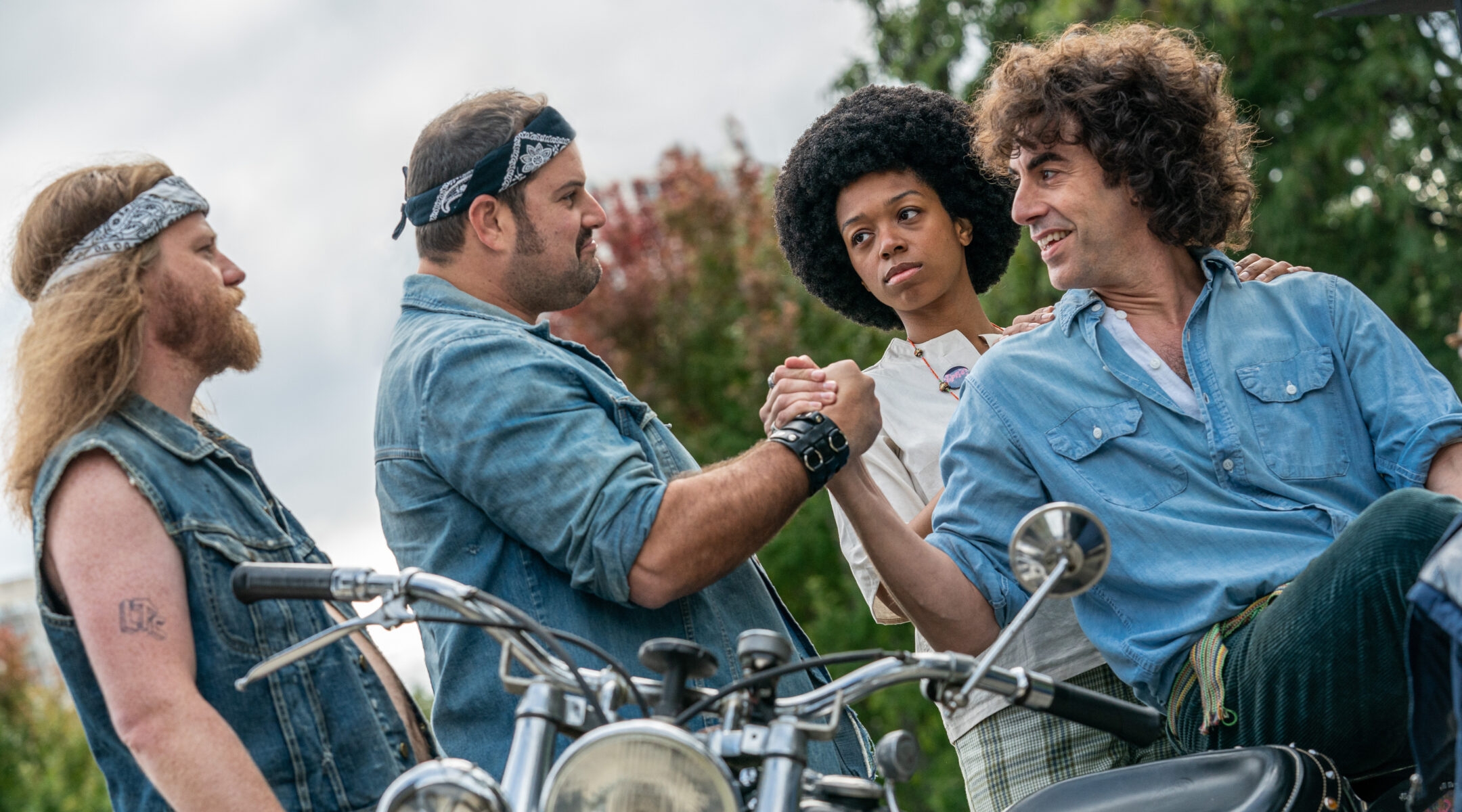 Sasha Baron Cohen, right, as Abbie Hoffman in "The Trial of the Chicago 7." (Niko Tavernise/Netflix)
Advertisement

(JTA) — The timing couldn’t be more prescient for Aaron Sorkin’s newest film, “The Trial of the Chicago 7.”

The movie by the Jewish “West Wing” creator, which is coming to Netflix on Oct. 16, is about the Jewish anti-war activist Abbie Hoffman, who was tried along with six others for conspiracy and inciting to riot for their role in the 1968 protests at the Democratic National Convention.

Hoffman is played by none other than the Jewish actor Sacha Baron Cohen. It’s his second super-Jewish dramatic role for the streaming service after playing the Israeli spy Eli Cohen in the 2018 miniseries “The Spy.”

The first teaser trailer for the movie premiered this week, and so much of it feels so timely and familiar — even if depicts events from more than 50 years ago.

Especially familiar are the clips of scenes from anti-war protests, which led to a violent showdown between the yippie protesters and law enforcement, including police and the National Guard. “The whole world is watching,” we hear a crowd chant. A sign with Black Power fists that reads “An attack on one of us is an attack on us all” looks like it could have come from any of the Black Lives Matter protests in recent months.

Seeing the fear and the determination of the protesters as they face armed guards also feels incredibly current. In fact, it makes you realize how little has changed over the past half-century — besides the hairstyles and the outfits, of course, plus the fact that nobody’s wearing a mask.

With an unruly, curly mane and an East Coast drawl, Cohen is perfect as Hoffman. The actor is known for his immersive, overstated satire and grand theatrics, after all, and Hoffman was known for his theatrical style and comical methods for his anti-war activism.

Cohen’s latest project, Showtime’s “Who Is America,” was an attempt to mock and shine a light on the injustices and hypocrisy by U.S. politicians. As the Jewish father of three told the Anti-Defamation League last year, his life and work have always been informed by activism.

“As an undergraduate, I traveled around America and wrote my thesis about the civil rights movement, with the help of the archives of the ADL,” he told the crowd at the ADL’s 2019 Never Is Now Summit on Anti-Semitism and Hate. “And as a comedian, I’ve tried to use my characters to get people to let down their guard and reveal what they actually believe, including their own prejudice.”

Lately, Cohen is going back to using his own voice for his activism. (“This is the first time that I have ever stood up and given a speech as my least popular character, Sacha Baron Cohen,” he told the ADL crowd last year.) He’s brandished scathing critiques (sometimes even laden with Nazi analogies) of social media sites like Facebook and Twitter for their role in aiding the spread of misinformation, fomenting hate and conflicts in this country and abroad. In his ADL speech, he called YouTube, Google, Facebook and Twitter “the greatest propaganda machine in history.”

So it makes sense that he was cast by Sorkin to play Hoffman, one of the most well-known (and controversial) anti-war activists in U.S. history. That’s true even if Cohen (jokingly) insists on Twitter that it was a mistake:

Aaron Sorkin accidentally cast me in this film. I’m relieved he did. https://t.co/uvHaQlk29a

As an infamous anti-war activist, Hoffman frequently got in trouble with the law and spent seven years in hiding to avoid the authorities. He was also deeply Jewish. In many fascinating online interviews, you can hear Hoffman talk about how he sang “hum hum” instead of “Jesus” in Christmas carols while attending the prestigious Worcester Academy boarding school in Massachusetts. (“They had just started letting Jews in,” he said.)

But perhaps the best Jewish video clip of Hoffman shows him making gefilte fish and telling a story about how he made the Jewish delicacy for the legendary author and pediatrician Dr. Benjamin Spock:

Will gefilte fish be featured in a scene in “The Trial of the Chicago 7”?