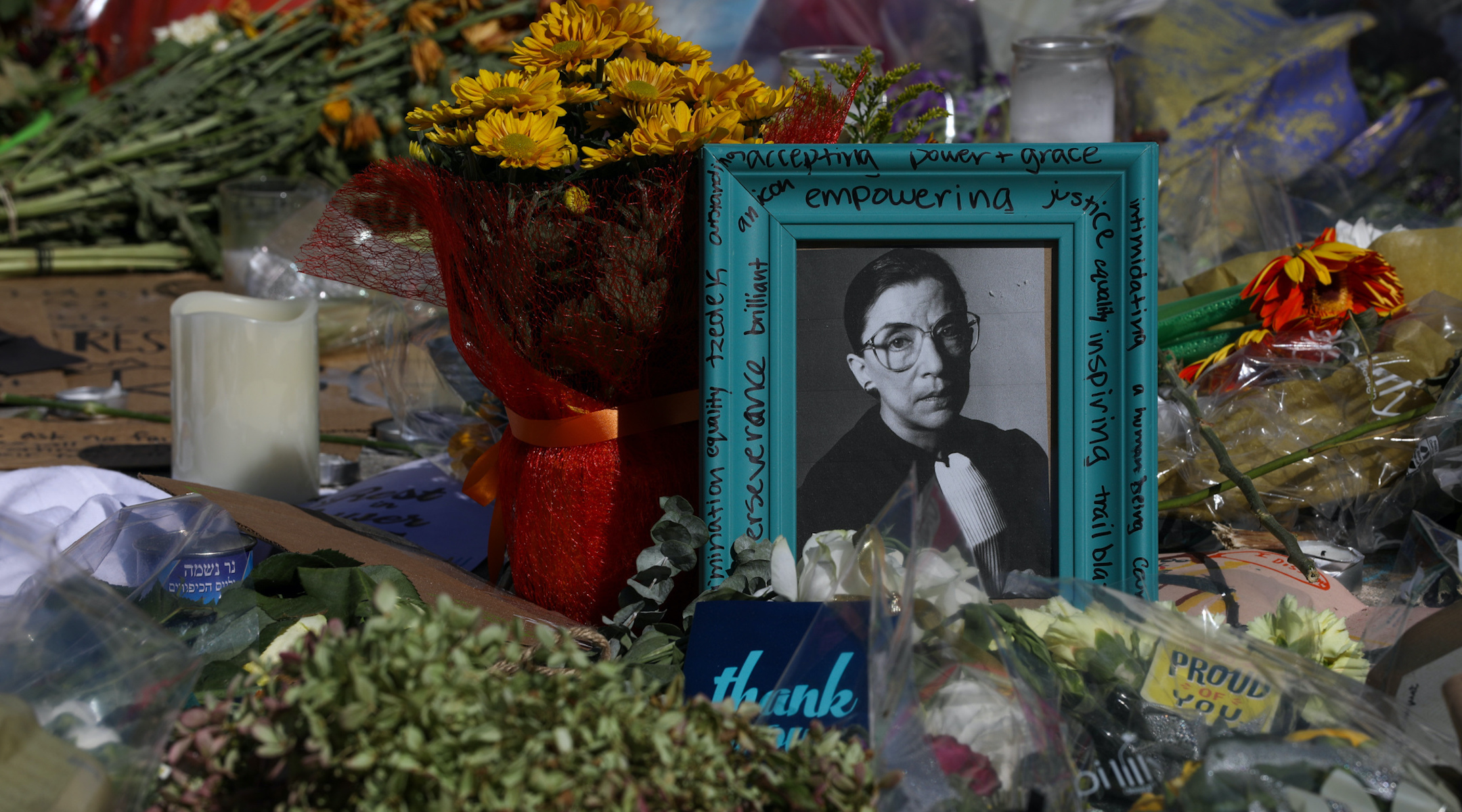 Flowers and notes are left outside of the U.S. Supreme Court to mourn the death of Supreme Court Justice Ruth Bader Ginsburg, Sept. 21, 2020. (Yasin Ozturk/Anadolu Agency via Getty Images)
Advertisement

(JTA) — Within hours of Ruth Bader Ginsburg’s death on Friday evening, an obscure Jewish tradition began circulating online: Someone who dies on or just before Rosh Hashanah is a righteous person.

“A Jewish teaching says those who die just before the Jewish new year are the ones God has held back until the last moment bc they were needed most & were the most righteous,” NPR legal affairs correspondent Nina Totenberg tweeted just after midnight. “And so it was that #RBG died as the sun was setting last night marking the beginning of Rosh Hashanah.”

Others had made similar claims on Twitter earlier in the evening. By Saturday afternoon, Reuters had published a story about the significance of the timing of Ginsburg’s passing, citing no less a source than Rabbi Rick Jacobs, the head of the Union for Reform Judaism.

But where does this idea come from?

“This might be part of one of those cosmic games of Torah telephone,” said Rabbi Danya Ruttenberg, scholar in residence at the National Council of Jewish Women, who validated the Rosh Hashanah righteousness thesis on Twitter after one of her many followers asked her to confirm it.

The idea seems to derive from a creative reading of a passage in the Babylonian Talmud, which relates that humanity is split into three groups on the Day of Judgment, which can be understood to mean Rosh Hashanah. The wholly wicked are immediately consigned to their fate in Gehenna, the Jewish correlate of hell. The middle-of-the-road folks are sent to Gehenna as well, but just for a time. And the wholly righteous are immediately granted eternal life.

“If you die at the end of the year, literally on the cusp, which is exactly when Ruth died, that means in a sense that you’re assured for that whole year because you’re one of the righteous people,” Jacobs told the Jewish Telegraphic Agency, though he noted that he personally finds the notion theologically problematic. “That’s the only source that really gives this any kind of credibility, but it’s hardly what I’d call a matter of Jewish law. It’s in the realm of legend.”

There are, in fact, much clearer Jewish teachings about the significance of dying at particular times. Elsewhere in the Talmud, it says that dying on the eve of Shabbat is a good omen. Since Rosh Hashanah coincided with Shabbat this year, Ginsburg’s death also met that criteria.

Other sources teach that dying on one’s birthday is a mark of righteousness. According to the Talmud, Moses, the greatest teacher of the Jewish people, died on his birthday, the seventh day of the Hebrew month of Adar.

The idea that a Rosh Hashanah death is a mark of righteousness is much less explicit in traditional sources. Yet it appears to have wide currency.

Hours before Totenberg’s tweet, the author Ruth Franklin tweeted that Jewish tradition teaches that someone who dies on Rosh Hashanah is a “tzaddik,” a Hebrew word for a righteous person that shares a root with the word for justice.

Caroline Mandell, a Canadian lawyer who runs a legal consulting business, put a slightly different spin on it, tweeting that “only the most righteous” die on the eve of the new year.

And Brad Silver, who identifies himself on Twitter as a retired physician, explained that Ginsburg’s status as a tzaddik meant she had “superhuman abilities to make the world a better place.”

How an obscure Talmudic passage morphed into a belief that Ginsburg’s passing is a heavenly sign that she’s a superhuman justice spreader is anything but clear, but to some that’s in the nature of Jewish teachings.

“It is entirely possible that there is a Hasidic reading of this passage that takes us there, but I don’t know it,” Ruttenberg said. “There may be a more known Torah link that I don’t have in my hand that somebody got, or somebody’s bubbe or zeyde used to say this. Who knows? Torah gets shared in all sorts of ways.”

What’s undeniable is that Ginsburg’s death came at the start of a holiday where Jews are enjoined to contemplate ultimate matters of life and death. The liturgy of Rosh Hashanah describes it as a day when all of humanity passes before God, who prescribes a judgment for the year that is sealed 10 days later on Yom Kippur. It is a day when questions of how one lives are very much pushed to the forefront.

“Everything was teed up for there to be these associations,” Jacobs said.

He added: “What there’s no debate about is the significance of her life, the impact of her jurisprudence and the way in which the Jewish tradition was exemplified by her character. Her death on erev Rosh Hashanah sent a shudder, certainly through the American Jewish community and beyond. Her life and her legacy cast an enormous light and at the same time a shadow that we’re all still trying to make sense out of.”