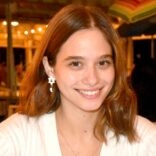 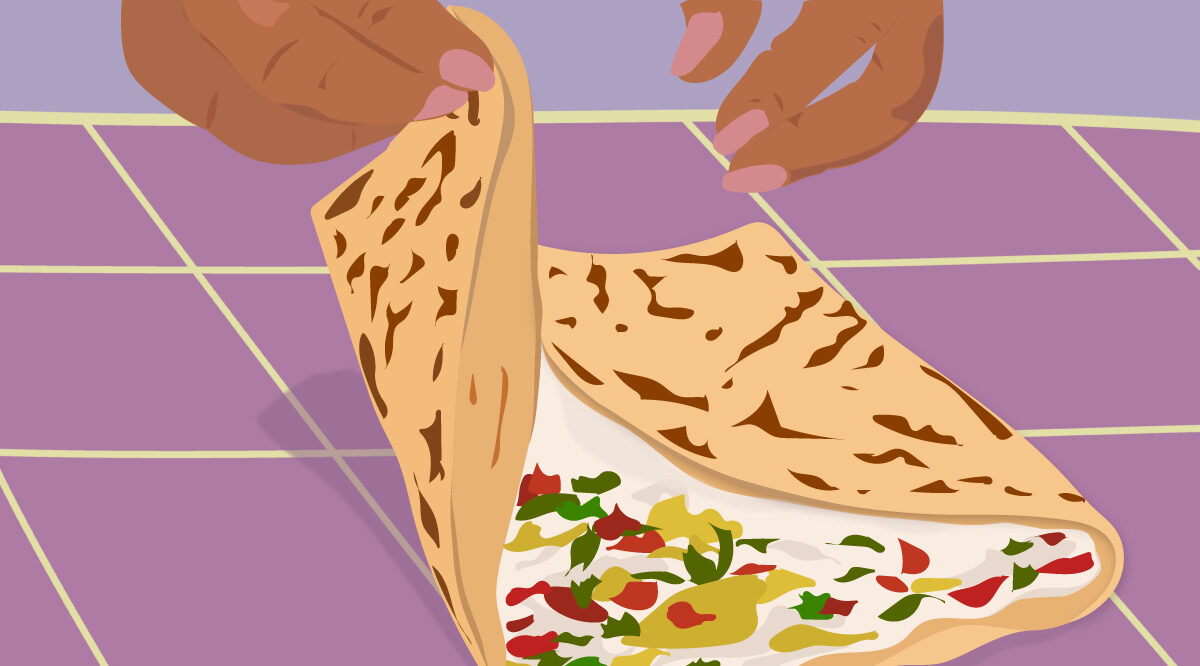 A Syrian Jew folding a flatbread with labneh, mint, tomatoes, olives and a drizzle of olive oil. (Grace Yagel)
Advertisement

(JTA) — When I was in first grade, during my first few weeks of yeshiva in New Jersey, my teacher asked the class what we knew about Shabbat. I kept quiet, but my classmates had plenty of answers.

“We can’t cut paper with scissors,” one said.

“I’m not allowed to use glue,” a classmate behind me pointed out.

Another student raised their hand and gleefully shouted out, “Kibbeh and lachmagine!”

Our teacher laughed and responded, “Yes, we do eat kibbeh and lachmagine on Shabbat, that’s my favorite part!”

That was the moment I realized my fellow classmates, my teachers, my community, were just like me. They ate kibbeh, lachmagine, sambusak, ka’ak and every other food I thought would be considered weird or different. It was in that moment I realized the stark difference from the stories I heard from my mother about her own upbringing.

My entire paternal family came from the Syrian city of Aleppo in the early 20th century. My maternal grandfather was born in Damascus, my grandmother in Istanbul. They married in Lebanon, had two children and escaped in 1967 when it became untenable for Jews to live there. My mother is the first in her family to be born in North America. She was raised in Montreal and attended a Jewish school with mostly Ashkenazi children.

My mother and I were in our backyard a few weeks ago when I was imparting my thoughts on being raised in our Syrian community surrounded by people who shared our background, values and traditions. I told her about my experience in first grade and the small, stunning revelation of my community.

Sitting on lounge chairs under the sun, my mother relayed the story I’ve heard since I was a child: my great-grandmother Leila baking pita bread, then spreading labneh and mint with a drizzle of olive oil and rolling it up for my mother to eat for lunch. And my mother — nearly the same age I was when I heard “kibbeh and lachmagine” — taking the rolled-up pita out of her bag at lunchtime and attempting to eat it, only to be surrounded by questioning classmates.

“What is that?” they asked my mother.

“Arab! She’s an Arab!” they taunted her, faces twisted in disgust.

I have heard this story since I was young, nearly every time my mother or grandmother prepares me a pita sandwich with labneh and mint (and tomatoes and olives). But this was the first time my mother told me the actual taunts thrown her way, the manner in which they spit out the word “Arab!”

I have never met that level of blatant hostility, but now, venturing out of my community and onto a university campus in Brooklyn and now Montreal, I do encounter confusion and questioning when I tell classmates that I’m a Syrian Jew. I’m often met with, “There are Jews in Syria?”

To which I respond, “Well, not anymore.”

As I proceed further out of my community and into the “real world,” I realize my Jewish identity is a puzzle to nearly everyone I meet. I didn’t understand it at first. How could people not know about Jews, about where we come from and our histories, how we ended up where we are today?

Learning more about my Jewish history, as well as the histories and heritages of our vast community, has made me realize that the lenses through which the world views Jewish people is very much centered on Ashkenazi Jews (and even then, people aren’t aware of nor educated fully on the multifaceted history of Ashkenazi Jews, either).

Mizrahim (Jews who were exiled to Middle Eastern countries), Sephardim (Jews who were exiled to Spain) and other subdivisions within our larger Jewish community are too often ignored by Ashkenazi Jews and the institutional Jewish world. The dangerous connotations and rhetoric that comes along with our erasure within and outside of Jewish communities is more than just a matter of “they don’t know about us.” With our existence being barely an afterthought, the mainstream idea of Jewish people — what we look like, our traditions, our historical backgrounds — is inherently warped.

The conversation on Judaism and Jewish history, as well as the modern Jewish experience, has largely been led by and centered on Ashkenazim. That conversation is an important one. There are people who deny the Holocaust and those who subscribe to the preposterous notion that Ashkenazim are not “real Jews” because they don’t know the expansive, complicated history of Jewish people in Europe. But a conversation centered on and led by Ashkenazim while Mizrahi, Sephardi and numerous subdivisions are overlooked leaves us ignored by the rest of the world, too.

Which means our stories aren’t part of the conversation. Which means our cultures, languages, traditions and struggles aren’t considered part of the whole Jewish experience and history. Which means I’ll spend my whole life telling people I’m a Sephardic Syrian Jew, and the response will always be, “I thought Jews were from Europe?” or, “So you’re not a real Jew.”

My question isn’t why has this happened, for the answer is complicated, painful and too dense to sum up. Instead I ask how: How can we as Jewish people combat anti-Semitism and miseducation regarding our very existence and history if the experiences and validity of Sephardim, Mizrahim, Beta Israel, Jews of Color, Black Jews and so forth is constantly questioned, denied and excluded within our own communities?

But that framing can be problematic, too, because it does something that I am unequivocally against: It implies that the only way we can be united as a people is if we focus on combating hatred.

But there are two truths that exist:

I firmly believe that we cannot face anti-Semitism head-on if we don’t face the biases and prejudices within our own communities. We cannot be a united people for ourselves if the classification and inclusion of Jewish people and experiences is continuously determined solely by the majority (and by extension, the rest of the world).

I believe that if we are to come together, our motivation should not be spite, hatred and fear. I yearn to learn more about all Jewish traditions, heritages and stories because I love being Jewish and I love my own traditions, heritage and stories. Community is a vital part of Judaism, and while I have been fortunate to be a member of a Sephardic Syrian community, it’s the bigger picture I’m concerned with.

Stepping out and interacting with the “real world” while simultaneously witnessing the influx of anti-Semitism — particularly in New York and New Jersey, where I live — was something of a rude awakening. But my rudest awakening was seeing my Judaism questioned, denied and pushed aside by fellow Jews.

I find myself thinking about my mother’s story often, how she went home that day and told my grandmother and great-grandmother to stop giving her pita bread, or other “weird food,” for lunch. My grandmother refused, telling my mother to stand her ground. I don’t think my mother has stopped standing her ground since. I certainly don’t have to ask her what she brought for lunch the next day.

The fact that I was raised in and belong to a community of Sephardim from Syria like myself and my family, the way I love and cherish my Judaism, how it is rooted in every aspect of my life — it all stems from my mother’s pride in her heritage, which stems from her mother, her grandmother and so forth. One can say I’m simply keeping up with my family tradition.