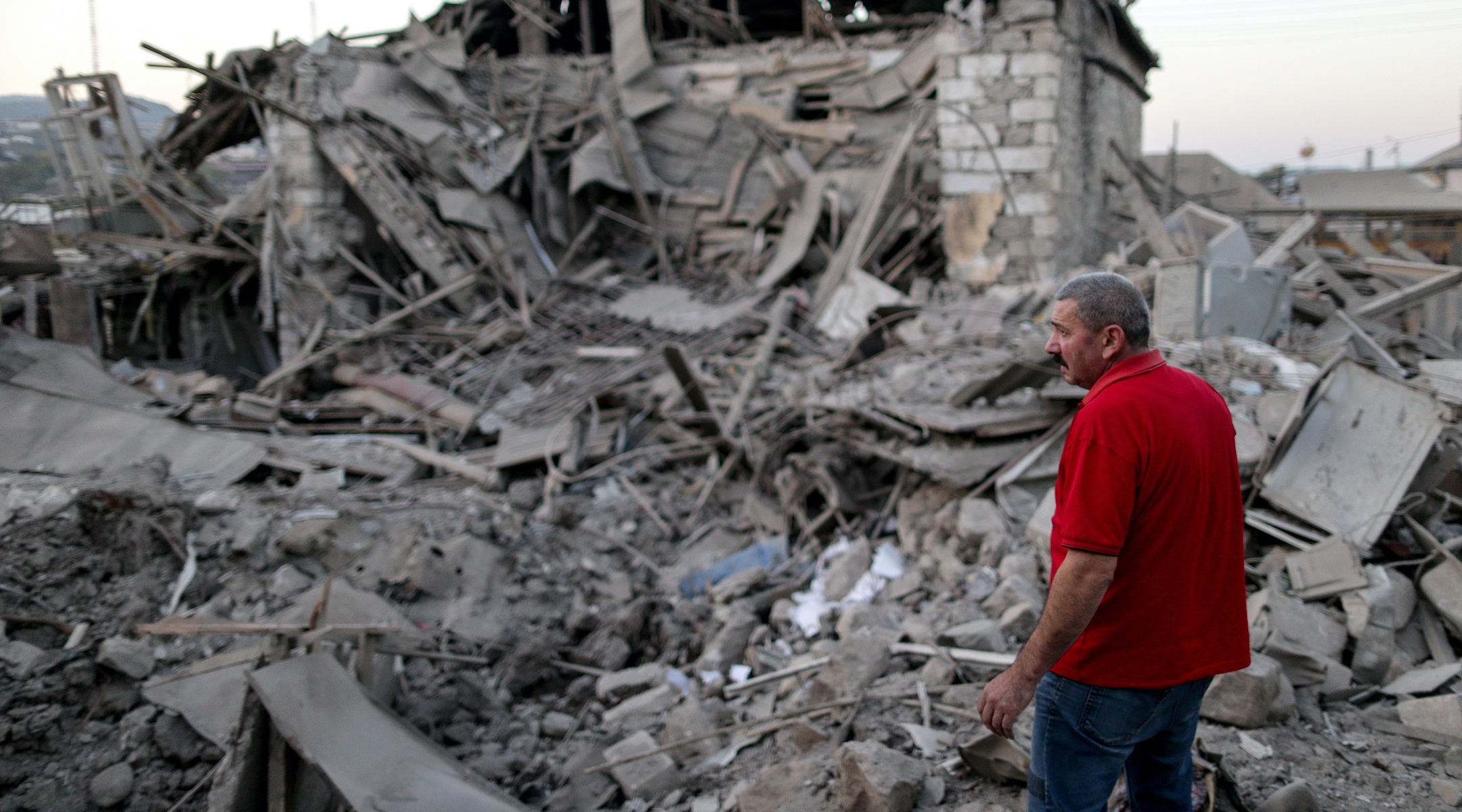 A local resident examines the ruins of a residential house destroyed in a shelling attack in the disputed Caucasus Mountains territory of Nagorno-Karabakh. (Sergei Bobylev/TASS via Getty Images)
Advertisement

(JTA) — The de-facto leader of a disputed region claimed by both Armenia and Azerbaijan accused Israel of assisting in a genocide against his people.

In a speech last week, Arayik Harutyunyan, the Armenian leader of the disputed Nagorno-Karabakh region, said Israel is “responsible for the genocide in Karabakh.” Harutyunyan was referring somewhat hyperbolically to the deaths of several hundred people in recent weeks in armed clashes between Armenian separatists and Azerbaijani troops. The area has seen deadly clashes for decades.

Azerbaijan is a major buyer of Israeli arms, including some of its most advanced strike drones. Some of those weapons have reportedly been against Armenian troops or groups that it backs.

Israeli officials have said they have no knowledge of or involvement in how Azerbaijan uses the weapons it buys. But Harutyunyan dismissed such claims during a press conference on Oct 11.

“These statements are a mockery. Of course they know and continue to supply weapons anyway. And the authorities of Israel, which itself survived the genocide, are also responsible for this genocide,” Harutyunyan said, according to a report in RIA Novosti.

Israel’s economic ties to Azerbaijan, which supplies about one-third of Israel’s total oil consumption, have long complicated relations with Armenia, which recalled its ambassador from Israel on Oct. 2 on account of the weapons sales, though without making any reference to genocide.

The move came just months after Armenia’s president, Armen Sarkissian, made a landmark visit to Israel in which he spoke about the bonds between the nations born of their shared experience of genocide. Israel and Armenia “share common history through painful and sad times with the extinction of millions in the Holocaust and the Armenian genocide,” Sarkissian said in a Jan. 24 speech in Holon, referring to the killing of hundreds of thousands of Armenians by Turkish soldiers during World War I.

Israel for decades declined to recognize the slayings as genocide for fear it would anger Turkey, a major trading partner. In 2015, on the 100th anniversary of the event, Israeli President Reuven Rivlin described it merely as “mass killings.”