Since astronaut Jessica Meir returned to Earth in April from the International Space Station, she — like all of us — has spent a lot of time indoors and cooped up.

While many of us have spent our confinement dreaming of future trips, Meir is working on her own travel plans to a singular destination: She wants to walk on the moon.

It’s not just a pipe dream.

Meir, the fourth Jewish woman (and 15th Jew overall) to travel to space, made the Guinness Book of World Records when she and fellow astronaut Christina Koch conducted the first all-female spacewalk — lasting 7 hours, 17 minutes — on Oct. 18, 2019. Not long afterward, the pair did it again.

Named as one of Time magazine’s 100 Most Influential People of 2020, Meir has an interesting Jewish story.

She grew up in Caribou, Maine, the daughter of a Swedish mother and an Iraqi-born father who immigrated to Israel as a child, fought in the Israeli War of Independence and later moved to Sweden before ending up in the United States. Meir, the youngest of five, also holds Swedish citizenship.

Meir, 43, was raised in a Jewish home, regularly attended synagogue as a child and feels very connected to Israel. She last visited there four years ago, and she took with her to the space station a postcard from Yad Vashem with a painting by a Holocaust survivor, a medal coined in memory of the late Israeli astronaut Ilan Ramon and the Israeli flag.

“My father grew up in Israel, and most of my relatives from my father’s side still live in Israel,” Meir said. “I hope I can visit Israel soon; it is a very important part of my life.”

We sat down recently with Meir for a Zoom interview to talk about her work in space, what it’s like to be a role model for girls and women the world over, and her Jewish connections. Meir talked with us from the NASA Space Center in Houston while wearing her iconic flight suit. 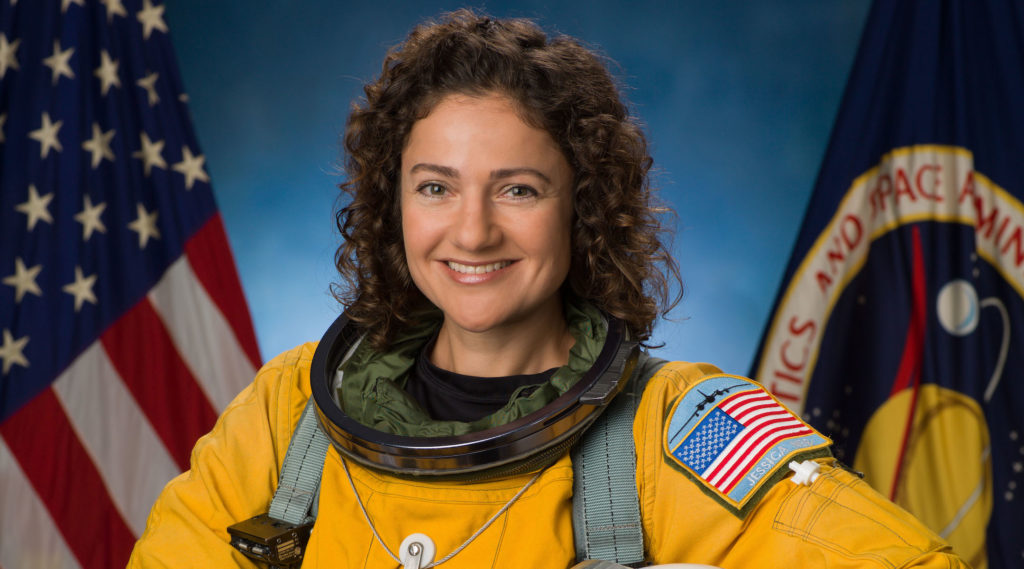 Meir is seen in her official NASA portrait. (NASA/Robert Markowitz)

“There are some key moments in becoming an astronaut, one of which is when you first wear your blue flight suit,” Meir said. “This is such an iconic image, which all throughout my childhood I associated the suit with my dream of becoming an astronaut. So, wearing this suit when I’m being interviewed here, or giving a lecture to children – I suddenly realize: ‘Wow, this is me now, I’m the person on the other side, I’m the role model.’ And I take it very seriously.

“It is a very important part of our role as astronauts, to be in touch with the public, to communicate with people and to educate them. This is one of NASA’s key mission statements. So even though it’s still a little hard to believe that I’m the one who inspires others to be like me, I think it’s my duty to continue making that connection and inspire the next generation of researchers.”

But Meir doesn’t take herself too seriously.

My two daughters joined me for the interview, and when my 7-year-old, Tuti, asked if there were any other creatures in space that were “human-like,” Meir answered enthusiastically.

She added, “I definitely believe that there are some forms of life in outer space – maybe there were in the past, and maybe they are there right now, or will be in the future. Statistically, if we look at the sheer size of space and the dimensions of space and time, it is very unlikely that we are the only planet where any kind of life has evolved.”

Later, when my 9-year-old, Lihi, wanted to know what it felt like to be in space, Meir talked about how fun it was.

“Ever since I was a child, even younger than you, I have always said I want to be an astronaut. Even the simple act of floating – when you’re in a state of constant weightlessness and floating around – it’s just so much fun,” she said.

“Everything is more fun when you’re floating, whether you just finished eating or fixing something, or doing an experiment, you can just take a moment and float up and down or do some cartwheels in midair, or float around like Superman inside the space station. I think it allows us to feel like children again, to express this cheerfulness which sometimes we lose when we grow up and become adults.”

Aside from the Israeli items Meir took with her to space, she also brought some American Jewish totems with her, including a pair of socks with menorahs (for Hanukkah). In an ode to Jewish grandmothers everywhere, she also baked some cookies while in space, much to the delight of her 250,000 Instagram followers. 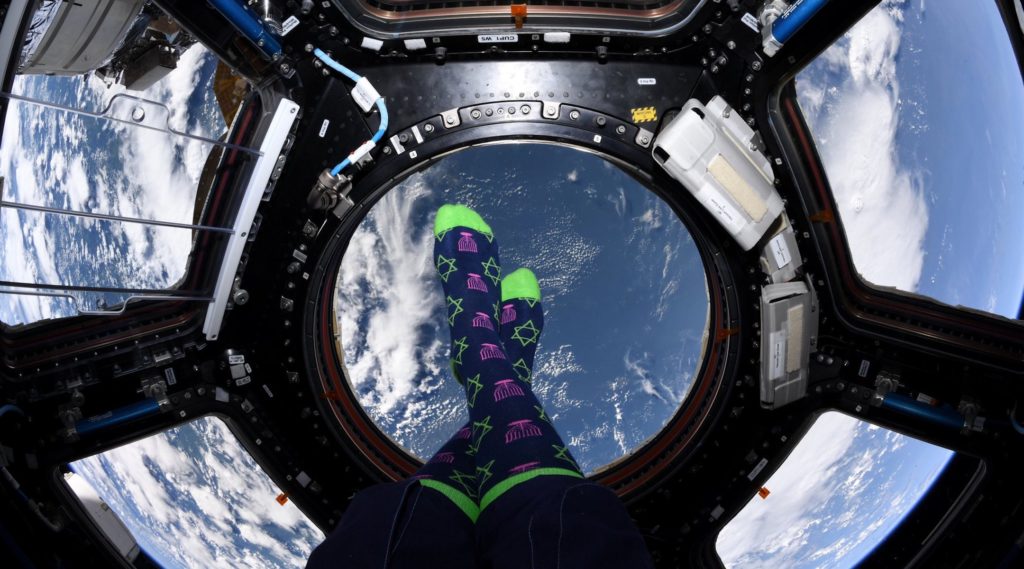 In first grade, when Meir was asked to draw what she’d like to be when she grew up, Meir drew an astronaut standing on the moon. At age 13 she enrolled in a NASA summer camp, and at her college graduation her parents held a sign that read ‘Congratulations, space girl!”

But though her path was supposed to lead her straight to aeronautics and space studies, Meir first earned a doctorate in marine biology. Her dissertation focused on the diving physiology of emperor penguins and northern elephant seals, including research expeditions in Antarctica and Northern California.

She described how that experience connects to her space work.

“The topics I was drawn to, the physiology of animals in extreme environments, required work in isolated places such as Antarctica, and were driven by curiosity and the need to explore,” Meir said. “In the end, even though it didn’t seem like the traditional route to becoming an astronaut because I did what I loved I excelled and I was happy. I felt satisfied and made it my career, and it led me to fulfill another dream – reaching outer space.”

Prior to joining NASA, she participated in a joint mission of the space agency and the U.S. National Oceanic and Atmospheric Administration. This time she and her friends were themselves the subject of an experiment: As part of their mission, she and a number of other crew members spent six days underwater in a state of saturation diving.

Meir also spent a lot of time researching the physiology of animals in extreme environments, such as penguins, seals and birds that live at high altitudes.

“At that point I was the scientist and researcher – and the animals were the subjects of my research. Now I am the ‘animal’ being experimented on,” Meir said. “I think it’s a natural role we play as astronauts.

“On my mission, the studies in which I was the subject examined how space flight and a micro-gravity environment affect the human body. Understanding these things will allow us to monitor astronauts’ health and will be even more relevant to missions that require a longer stay in space — for example, when we return to the moon and eventually travel to Mars.”

Meir says that being Jewish is an important part of her identity. While in space in March, she tweeted a photo of Tel Aviv that she took from space. Earlier in her mission, Meir tweeted a Hanukkah greeting that included a photo of her menorah socks with Earth seen through a window in the background.

This article is part of a joint project of Onlife, the Gesher Leadership Institute and JTA, featuring some of the most influential Jewish women from around the world. Hadas Ragolsky Chrissy, editor of Onlife, is an Israeli journalist.

Shani Tsur contributed to this article.