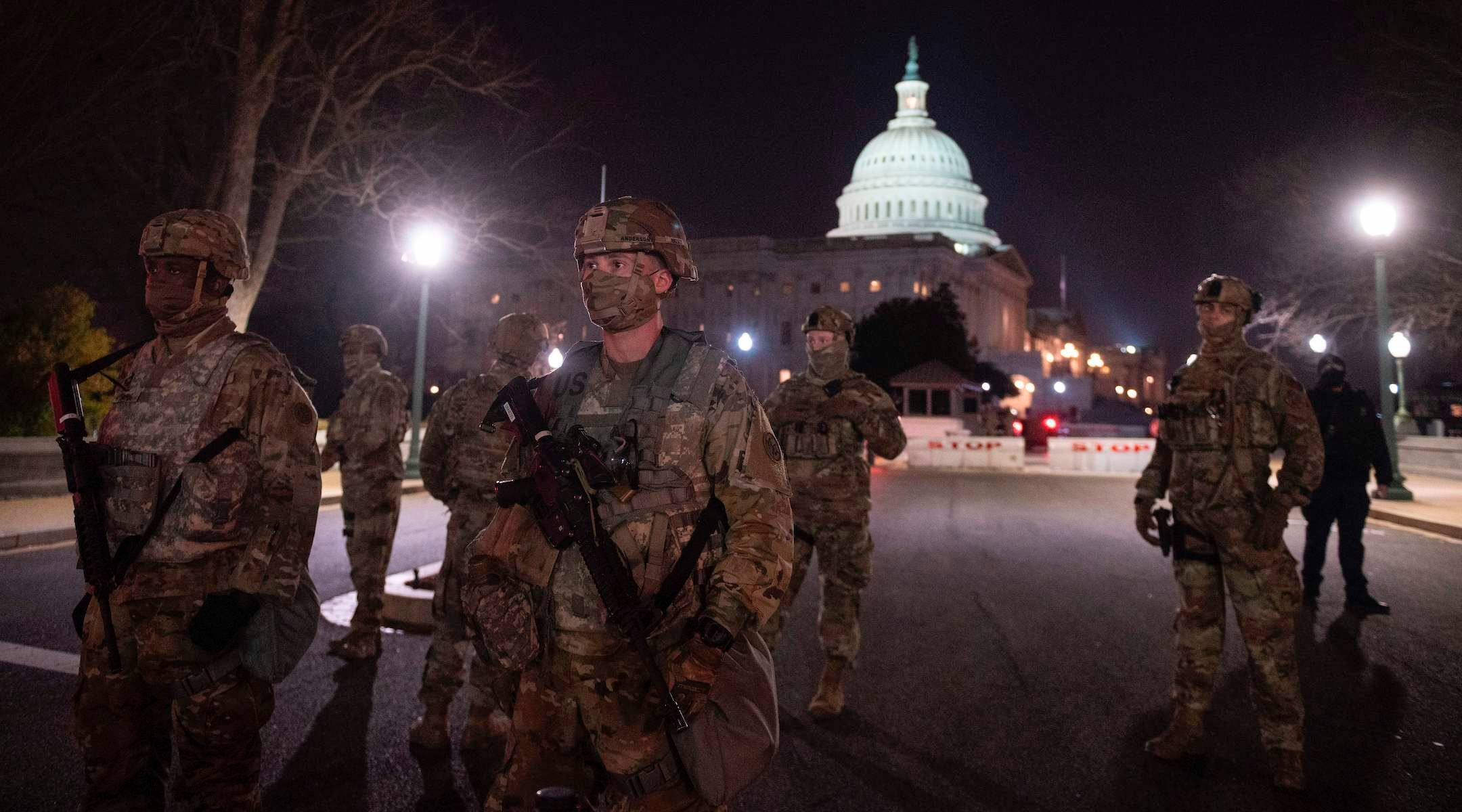 Members of the U.S. National Guard deploy around the U.S. Capitol, Jan. 12, 2021. Fears of extremist protests across the United States remain a week after the storming of the Capitol and ahead of Joe Biden's inauguration. (Andrew Caballero-Reynolds/AFP via Getty Images)
Advertisement

(JTA) — The alert, tweeted by a college student, was vague: A man in a MAGA hat near West Virginia University was  apparently asking for the locations of local synagogues and mosques.

On Thursday, a day after the tweet made the rounds of campus social media accounts, police didn’t know much more. A spokesman for the city of Morgantown, where the university is located, confirmed on Thursday that law enforcement was investigating the matter, but had no idea who the man in question was or even definitive confirmation that the interaction took place.

As it turns out, the interaction did not take place as described. The man in question never mentioned a synagogue, according to the police chief of Granville, the nearby town where the incident took place. Responding to an inquiry from Thursday on Friday morning, the chief, Craig Corkrean, confirmed that someone wearing what appeared to be a Trump or MAGA hat asked someone for the location of the nearest mosque, and walked away.

Police are investigating the man’s identity “to cover all of our bases,” Corkrean said, but he stressed that asking for the location of a mosque isn’t a crime.

“I think some people got a little ahead of themselves,” Corkrean told JTA Friday. “I don’t know where this threat against the Jewish community came from, but it did not happen.”

But coming just a week after a pro-Trump mob stormed the U.S. Capitol, the rumor that had spread on Wednesday and Thursday was enough to spur action. The Morgantown Police Department increased patrols around synagogues and mosques. The director of the campus Hillel moved the building’s lone Torah scroll off the premises.

“With all the anti-Semitism and everything else that’s going on, especially now, you have to take that stuff seriously,” said Richard Gutmann, the Hillel director. “Are they going to vent their anger on soft targets like synagogues and mosques? I think that’s a legitimate concern.”

Gutmann could have been voicing the anxiety of the country, which is still absorbing the shock of the Capitol insurrection even as it fears more violence to come. Ahead of President-elect Joe Biden’s inauguration on Wednesday, 20,000 troops have been deployed to Washington, D.C.

Extremists online — including on the social media platform Parler, before it was shut down — chatted about a “Million Militia March” in the days before the inauguration. Other accounts on the network, popular with extremists, accused Vice President Mike Pence of treason and pedophilia and shared pictures of nooses. Social media users promoting the pro-Trump QAnon conspiracy theory posted in coded language to avoid content moderators.

An FBI memo warned of armed protests at all 50 state capitol buildings starting this weekend to protest Biden becoming president. A flyer cited by the Anti-Defamation League, calling for a march in Washington and state capitols on Sunday, reads “When democracy is destroyed, refuse to be silenced.”

And on Telegram, a secure messaging app popular with the far right, channels focused on QAnon broadcast their usual confidence that President Donald Trump was about to reveal a massive criminal operation to bring down Biden.

“Rest assured, President Trump won yugely,” read one post from Wednesday on a QAnon channel with 25,000 members. “This means we won, together. Now it’s time to clean house, and drain the swamp.”

The ongoing far-right chatter comes as large tech companies have taken steps to boot extremists — and the president many of them admire — off their platforms. Trump was banned from Facebook and Twitter last week, and this week Twitter banned 70,000 accounts promoting the QAnon conspiracy theory. At midnight between Sunday and Monday, Parler was kicked off its web hosting service after being removed from the Google and Apple app stores.

Advocates for combating hate online are split on whether these moves will effectively reduce anti-Semitism online or in the real world.

Some say the decision to ban Trump and sniff out the conspiracy theorists who admire him is long overdue and insufficient. Others worry that once extremists are off platforms that are accessible to researchers, their organizing will be harder to track during a tense and unpredictable time.

“A lot of this stuff has gone dark in places very few people can trace it at the worst possible moment,” said Joel Finkelstein, director of the Network Contagion Research Institute, which studies how hate spreads online. “The stage is set. No one can trace these people on these encrypted apps. They’re violent, and they just exiled all of them off the radar.”

Yfat Barak-Cheney, the director of international affairs for the World Jewish Congress, has worked with Facebook on efforts like banning Holocaust denial and praised the companies for taking “proactive measures to limit the spread of  hate speech and misinformation that inspire extremism and violence.”

The Anti-Defamation League also has long called on social media giants, particularly Facebook, to do more to fight hate. But while the ADL praised the banning of Trump, it saw the decision as part of a pattern where social media sites act only after it’s too late.

“I think it is potentially the most extreme example of the crisis PR response to content moderation that we see on most of the major platforms,” said Daniel Kelley, associate director of the ADL’s Center for Technology and Society. “It’s infuriating. Blood is spilled, bodies hit the ground and then suddenly platforms feel motivated to act.”

Kelley said that while removing Trump may lessen incitement to violence, the platforms still need to do a better job tracking, reporting and auditing ground-level extremists. He said that when it comes to deplatforming Parler and taking extremist accounts off mainstream sites, the benefits outweigh the costs.

On Wednesday, the ADL called on the Justice Department to investigate Gab, another social network popular with extremists, for aiding and abetting the Capitol insurrection.

“The collective good that comes in shutting down these spaces is more powerful than the surveillance element,” he said. “A space that isn’t accessible by the Apple Store or Play Store is no longer accessible to a curious individual who’s on the cusp of being radicalized.”

Those who have already been radicalized are likely to gather in large cities in the states that tipped the election to Biden in November, said Finkelstein, based on what his team has been able to monitor. But he said unrest could happen across the country.

Morgantown, a progressive college town south of Pittsburgh, was not expected to be a flashpoint. But with even a whiff of alleged anti-Semitism, Gutmann said he wasn’t taking chances.

“Under normal circumstances, you might say it’s just some kookball,” he said. But this week, Gutmann added, “I’m not fooling around.”