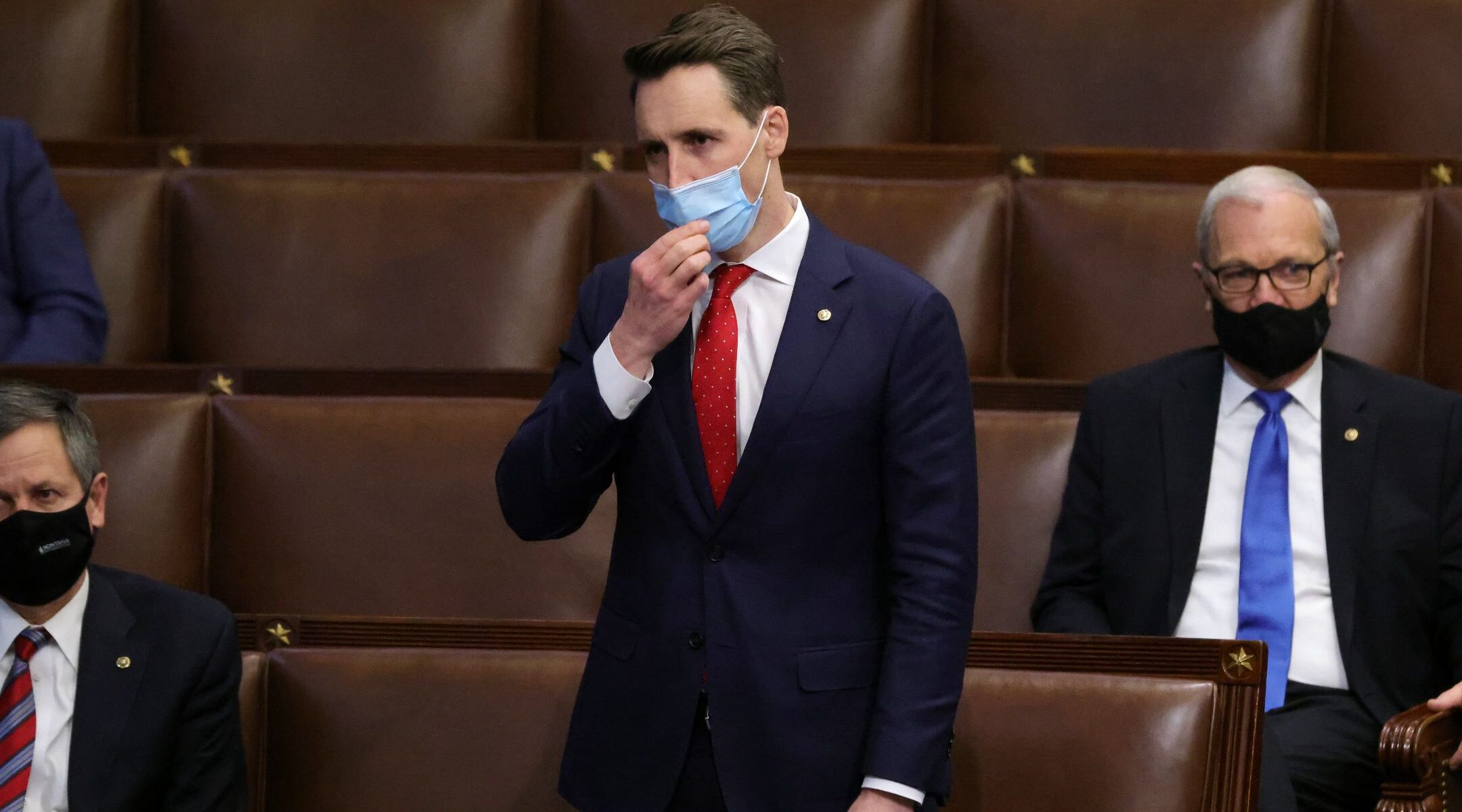 Sen. Josh Hawley signs on to the Pennsylvania objection in the House Chamber during a reconvening of a joint session of Congress, Jan. 6, 2021. (Win McNamee/Getty Images)
Advertisement

WASHINGTON (JTA) — Any hope of an immediate confirmation for Alejandro Mayorkas, the Homeland Security secretary nominee, ended on Tuesday when Sen. Josh Hawley expressed concerns about Mayorkas’ answer to questions about border enforcement.

A broad array of Jewish groups have urged the Senate to confirm Mayorkas immediately because of the rise of violent extremism.

But Hawley, the Missouri Republican who led the Jan. 6 effort to overturn Joe Biden’s election and signaled support for protesters who turned violent, said he was concerned that Mayorkas said during a Senate confirmation hearing on Tuesday that he would seek to block funding for a border wall on the Mexico border.

“Just today, he declined to say he would enforce the laws Congress has already passed to secure the border wall system,” Hawley said in a statement. “Given this, I cannot consent to skip the standard vetting process and fast-track this nomination when so many questions remain unanswered.”

During the hearing, Mayorkas said, in reply to Hawley, that he would hew to the law but also would “see what the opportunities are to discontinue any such obligations.” His answer was unexceptional; Biden has said he would stop building the wall, which was a centerpiece of outgoing President Donald Trump’s presidency, and any Cabinet member would be expected to seek the legal means of advancing a president’s policies.

An array of Jewish groups, including the Jewish Federations of North America and the Anti-Defamation League, have taken the unusual step of endorsing Mayorkas, a Cuban-born Jew, and have urged that he be in place by Jan. 20, citing the rise in anti-Semitism and particularly the Jan. 6 insurrection at the Capitol.

The insurrectionists were heeding a call by Trump to march on the Capitol to encourage backing for initiatives such as Hawley’s, to overturn the election, based on the fiction that Trump won the election. Hundreds among them looted the Capitol and battled police. Senators were considering Hawley’s objection to the electoral vote count when they fled the chamber as marauders broke into it.

At least five people died because of the melee. A number of Hawley’s backers have said they will no longer support him because of his role in advancing Trump’s false claim that there was massive election fraud.

In part because of Trump’s obstructionism, Biden is set to be the first president not to have a single Cabinet official confirmed on his first day. Most Republicans were ready to push ahead with some nominations, and there were hopes that Mayorkas at least would be in place.

A senator’s prerogative to block a nominee is an unofficial custom that Senate leadership can overrule. However, Hawley may then filibuster the appointment. It would take 50 senators to end the filibuster, which would not be hard to get to, but the procedure will likely push Mayorkas’ nomination to when the Senate reconvenes, after Biden’s inauguration on Wednesday. Two new Democratic senators from Georgia, Raphael Warnock and Jon Ossoff, will be sworn in by Friday, at which point Democrats will be the majority of senators.

Mayorkas, who worked closely with Jewish groups when he was deputy homeland security secretary under President Barack Obama, said during the hearings that securing targets of right-wing extremists would be a priority, as would combating anti-Semitism.

Two senators — Rob Portman, the Ohio Republican, and Jacky Rosen, the Jewish Nevada Democrat — each noted during the hearing that Congress had increased funding for securing nonprofit security grants, a program that has paid for added security for Jewish institutional targets, to $180 million.