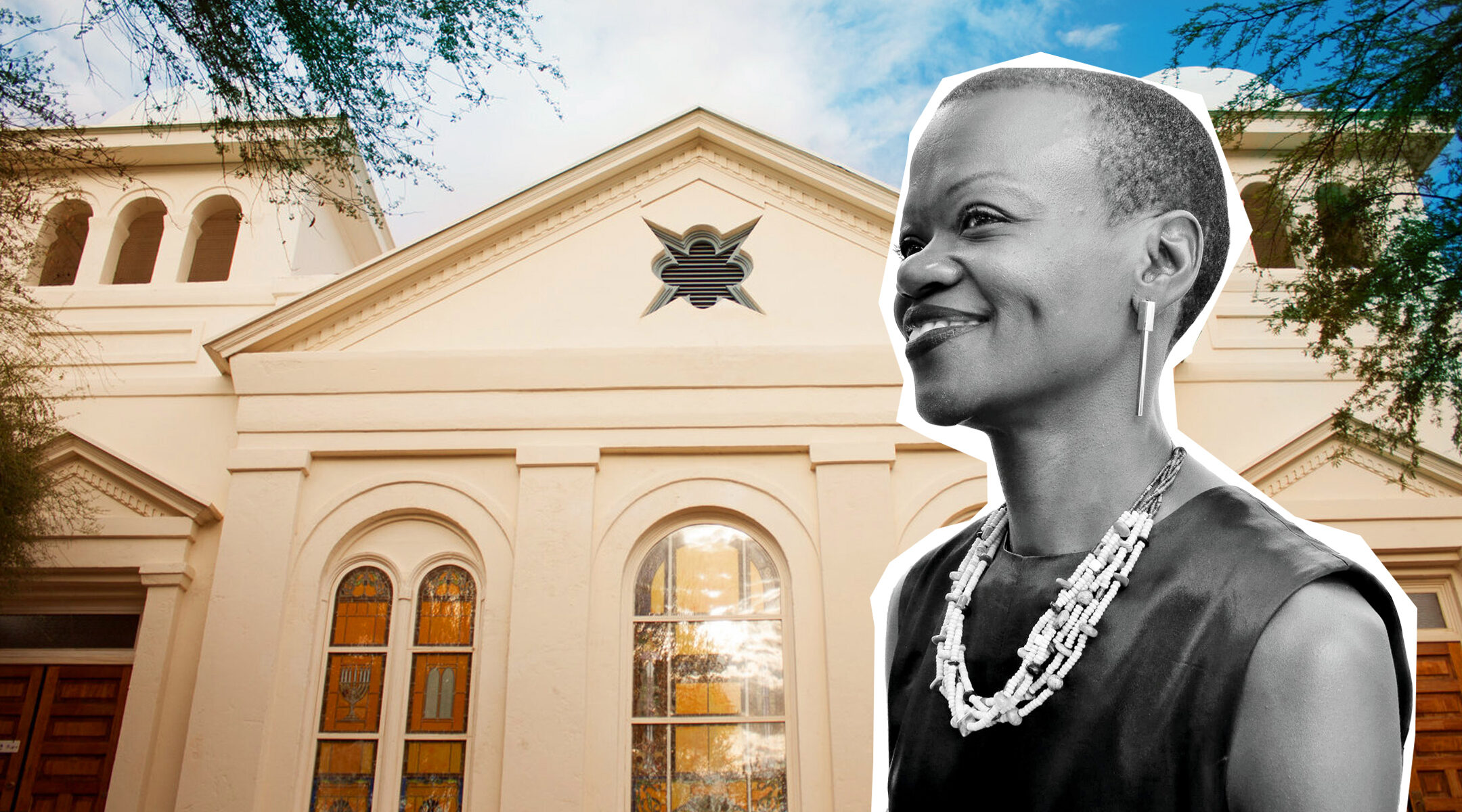 (JTA/Arizona Jewish Post) — The Holocaust museum in Arizona’s second-largest city has tapped a Jewish survivor of an African genocide as its new leader.

The board of directors at the Jewish History Museum/Holocaust History Center in Tucson unanimously selected Gugulethu Moyo in November to become its executive director, making her likely the first Jew of color to lead a major Jewish museum in the United States.

Moyo, the museum’s operations director since July 2019, brings a unique set of qualifications encompassing both her career as an international human rights lawyer and personal Jewish journey.

“Gugu has the most remarkable biography I have ever seen in an applicant for a position,” said Barry Kirschner, president of the museum board and himself an attorney.

That biography includes a childhood in Zimbabwe, a law career in support of media freedom and a Jewish journey inspired by South African anti-apartheid lawyers.

Moyo takes over a 15-year-old institution at a time of intense change for museums, memory and Holocaust education in Arizona.

The COVID pandemic has severely curtailed access to the museum, and its typical stream of non-Jewish visitors, especially schoolchildren on class trips, has stopped. Some programming has moved online in a shift that Moyo described as a “great opportunity and innovation” laced with uncertainty.

At the same time, Arizona has newly mandated education about the Holocaust and other genocides in schools, giving the museum a role in creating materials that draw on its archive of testimonies from survivors who have lived in the southern part of the state.

And the national reckoning over racism that erupted last spring following the death of George Floyd in police custody means that Moyo’s vision for the museum’s future has renewed resonance.

“The core work,” Moyo said, “is to continue with the mission of the museum, which is to tell the story of Jewish experience in this particular region and also to place our history alongside the history of others, to make connections between the things we have experienced as Jews with the experience of others in our wider community.”

Tucson, with a population of about 540,000, is less than an hour’s drive from the Mexico border and is considered the birthplace of the “sanctuary” movement to provide refuge for immigrants fleeing persecution in Central America. The Jewish museum recently launched a membership initiative called the Compelling Futures Collective that it says will be a “multi-racial, multi-ethnic, multi-gender, intergenerational, cross-class Jewish community … serving as a voice of conscience and resisting anti-Semitism and xenophobia with clarity and integrity.”

Melissa Martens Yaverbaum, executive director of the Council of American Jewish Museums, said she sees Moyo as an inspiring leader at a time when the role of Jewish museums is evolving.

“Gugulethu is a thought leader in the dialogue surrounding American Jewish museums,” Yaverbaum said. “She contributes new, thoughtful directions for museums seeking societal change, and will help us find our way as we aim to heal communities in these challenging times.”

Moyo will draw on her diverse experiences to chart that course — starting with her own childhood in Zimbabwe.

“One of my earliest childhood memories is of fleeing home in 1983 and 1984 when I was 6 years old and going into hiding during the Gukurahundi atrocities in which some 20,000 people from my ethnic group, Ndebele, were murdered,” she said.

The massacres, which stemmed from a rivalry between political parties, are classified as a genocide by the International Association of Genocide Scholars. 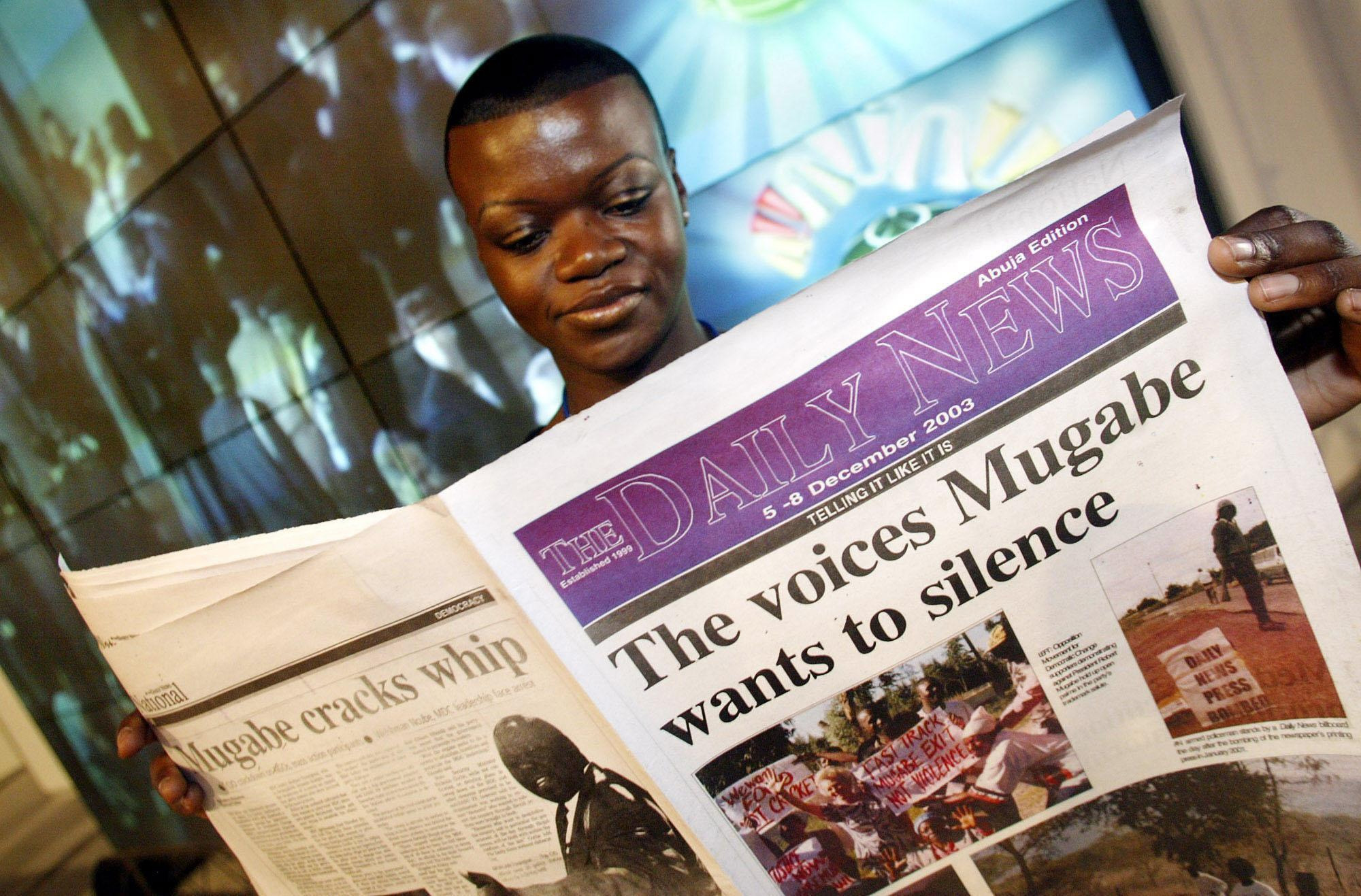 Moyo is seen in 2003 holding a special edition of the newspaper where she worked, which was banned by Zimbabwe’s government. (PA Images via Getty Images)

“I grew up understanding that people in power can decide they want to wipe out a group of people who are government opponents or people from a different ethnic group — whatever the cause of the hatred is, they can eliminate the other group,” Moyo said.

Returning to Zimbabwe, she was in-house counsel at Zimbabwe’s only independent newspaper, coordinating a team of lawyers challenging the government’s campaign to censor and shut down independent media. In 2003, she was beaten and jailed amid a crackdown on the press and political opposition in an incident that drew international attention.

Moyo said she sees a clear connection between that work and the role that Holocaust museums can play.

“A lot of the work human rights lawyers do, and human rights defenders do, would not be necessary, I think, if people were educated about rights, and about tolerance, and difference,” she said.

Moyo began exploring Judaism as a young adult, inspired by learning about the many human rights lawyers in South Africa who represented Black anti-apartheid activists there. She cited George Bizos, a non-Jewish refugee from the Nazis who attended Jewish schools in South Africa and later was part of Nelson Mandela’s legal team in the trial that resulted in his 27-year imprisonment, as a particular inspiration, as well as Albie Sachs, a Jewish attorney who was forced into exile because of his opposition to apartheid but later helped write South Africa’s post-apartheid constitution and served on its top court. (Sachs has agreed to deliver a lecture for the museum this spring.)

Then, in 2003, Moyo met the man who would become her husband, Joshua Polacheck, then in the U.S. Foreign Service and posted to the U.S. Embassy in Harare. Polacheck, who is Jewish, had spent part of his childhood living on Native American reservations with his parents, health care workers in the Indian Health Service, before settling in Tucson as a teen. 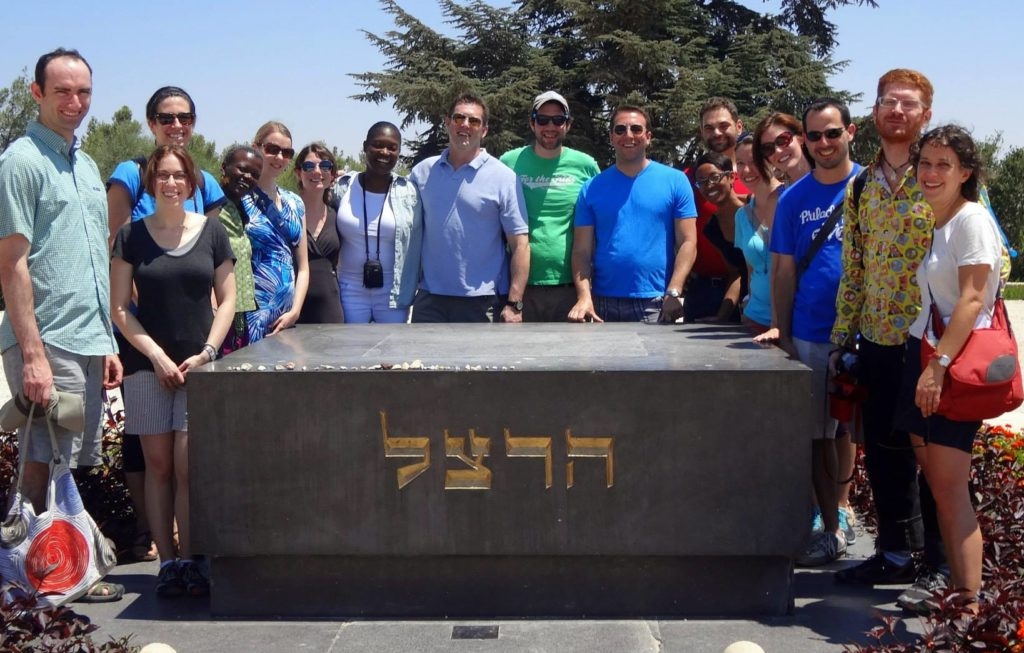 Moyo, fourth from left, at Yad Vashem on a Sixth and I congregational trip to Israel in 2013. Rabbi Shira Stutman is at far right; Moyo’s husband, Joshua Polacheck, is next to Stutman. (Courtesy of Moyo)

In 2011, Moyo and Polacheck were living in Washington, D.C., where they became involved with the Sixth & I synagogue. Senior Rabbi Shira Stutman said she came to know Moyo as “a deeply connected Jew, a creative and brilliant thinker, and an eternal learner. She has an expansive heart and a curious mind.”

Stutman said one of her favorite memories of Moyo, who formally converted with Stutman’s support, actually came after the couple left Washington.

“I have so many stories to tell of traveling to Israel together, studying Torah or just laughing over one thing or another,” Stutman said. “But one of my favorite Gugu stories is of the year she decided to take the Sixth & I adult b’nai mitzvah course. Midway through the year she and her husband moved to New Delhi, where he had been sent by the Foreign Service. But she was so committed to taking the class that she would get up at 4:30 a.m. to Skype in!

“We still miss her and Joshua here in D.C., but are so happy they’ve landed somewhere that they all can thrive.”

Although Jewish tradition discourages asking if someone is a Jew by choice, Moyo said she welcomes questions about her path to Judaism.

“The tradition of not asking is a comfortable one and a good one,” she said, but at the same time, not telling stories about people who become converts, and why, can mean missing an opportunity to educate about the array of Jewish experiences.

“At this point, when we’re all talking about inclusivity, those stories should be told,” she said, adding that what is uncomfortable is when people ask “because they think you are not Jewish, because they make assumptions about what a Jewish person looks like.”

Those assumptions, Moyo said, are exactly the sort that the museum will aim to dispel under her leadership.

“I am particularly interested in perhaps complicating the story that we tell about Jewish identity,” she said.

Moyo also draws inspiration from stories on her husband’s side of the family. His father was a civil rights activist, arrested and beaten in Mississippi in 1964. His grandfather, Walter Polacheck — their 6-year-old daughter’s great-grandfather, she notes — was a physician serving in the U.S. Army in World War II. After the war in Europe he was sent to Nuremberg, where he treated the Nazi leaders on trial for war crimes.

“This is history we talk about in our family often and reflect on, and also what must have been a really complicated experience to be a Jewish American soldier” at that time and place, with many of his own extended family wiped out in the Holocaust, she said.

The family included several Holocaust survivors until recently, she said, adding that “There are a lot of very personal reasons why this work matters.”

An extended version of this story originally appeared in the Arizona Jewish Post.

Correction (Feb. 8, 2020): This story originally described George Bizos as a Jewish Holocaust survivor. It has been corrected to show that he was not.