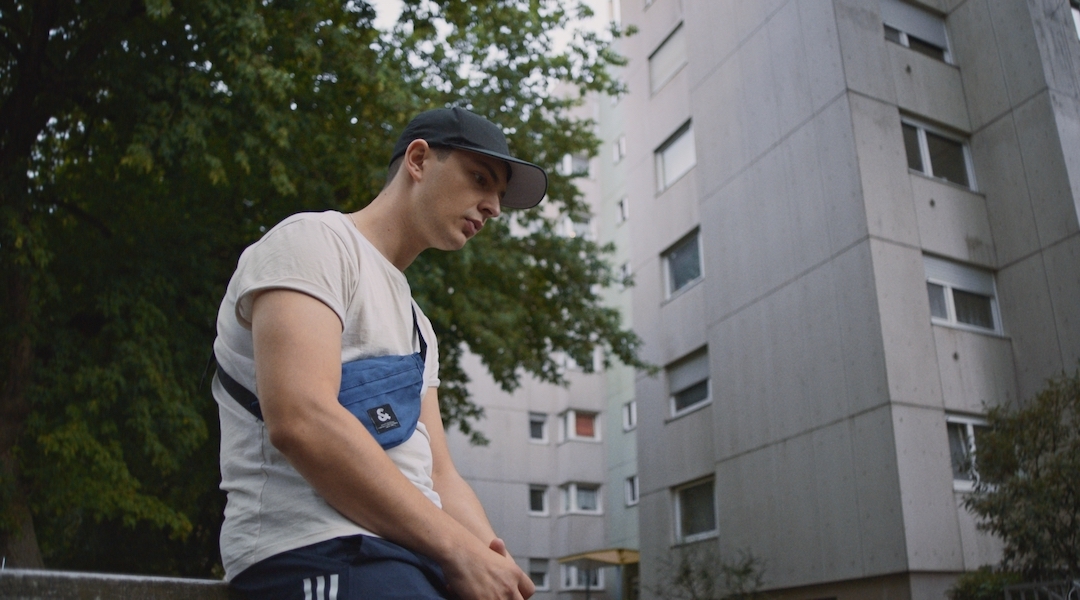 BERLIN (JTA) — There’s a swastika drawn inside of a high school bathroom stall. Dima Liebermann, the protagonist of the German short film “Masel Tov Cocktail,” uses a marker to alter the hate symbol, giving it eyes and wings.

“Nice owl,” a woman smoking in the stall with Dima says.

“Nazi owl,” he replies with a smirk.

So begins the darkly comic 30-minute film on a day in the life as a young Jewish person in Germany, which pokes fun at several layers of a society still not fully comfortable with how to interact with its Jewish population.

Dima, who is quick-witted, macho and built with muscle that fills out his simple white T-shirt — and who often addresses the viewer directly, breaking down the third wall in impassioned pleas for understanding — does not conform to what his neighbors think of when they think of a Jew.

The film from Arkadij Khaet and Mickey Paatzsch, both 29, premiered last year at the 42nd Max Ophüls Film Festival in Germany and has gone on to play across the country and as far as the United States, South America and Asia, winning awards along the way. It’s now coming to some American Jewish film festivals that are streaming online, including ones in Denver (now through Feb. 17), Palm Beach, Florida, (through April 1), Atlanta (Feb. 17-28) and Miami (April 15-29).

Last year, Khaet won the Civis Media Prize, considered to be one of Europe’s most important awards for projects related to topics of integration and cultural diversity.

Khaet drew from his personal experiences in writing the film, with Dima working through encounters from the director’s life. He compared it to a “road trip” through a small German city condensed into one day.

The common theme is how Germans try to classify Dima’s Jewishness through various points of view. There’s the classmate who makes anti-Semitic gestures and comments, the passerby on the street who quickly makes a point to say that none of his ancestors were Nazis, and a teacher that Khaet describes as philo-Semitic who asks him to share his Holocaust story for a class — assuming he had one to share.

“One of the most common situations is people who say to me, ‘Wow, I’ve never met a Jew before,’” Khaet said. “Then without reason, after a couple of beers, they start to tell me that their grandparents or great-grandparents weren’t Nazis but actually fought in the resistance or saved Jews.”

“Masel Tov Cocktail” confronts claims like these, pausing the narrative of the film briefly to show the numbers. One example: 29% of Germans believe their ancestors tried to help Holocaust victims by, for example, hiding Jews. In reality, less than 0.1% did so. (The results come from a variety of sources listed in the credits.)

Khaet believes that Germans, who are now in the third or even fourth generation after the Holocaust, feel the need to justify themselves without even being asked. The reason, the film argues, is that Germans only experience Jewish culture through World War II and Holocaust films, in which Jews are almost exclusively presented as victims.

“On the other hand, in the United States, Jewish culture is more universal and broader in film, comedy, literature,” Khaet said. “In Germany, that simply doesn’t exist.”

Like the character of Dima, Khaet and his family were part of the Jewish immigration of the early 1990s following the collapse of the Soviet Union. Over 200,000 Soviet Jews immigrated to Germany during that period. Khaet, whose family is from Moldova, grew up primarily in Oberhausen, a city of about 211,000 in western Germany’s industrial Ruhrgebiet region.

“From a Jewish perspective, it was a little lonely,” he said, noting that he started off with local Jewish connections. “But I was able to find a good structure to network with other Jews and strengthen and develop my Jewish identity.”

Some of that structure came through organizations like ZWST (Central Welfare Board of Jews in Germany) and Netzer Olami, a progressive Jewish youth movement. From age 12 to 16, Khaet attended Netzer Olami’s Machanot (summer camp) and grew to become a leader and organizer of future Machanot. At 18, he traveled to Israel for a gap year with Shnat Netzer, a global youth movement in Progressive and Reform Judaism.

Khaet said that one of the reasons he wanted to make this film was to give representation to the Russian-speaking Jewish community in Germany. According to the Central Council of Jews in Germany, more than half the Jews from the former Soviet Union found their way into Jewish communities in Germany, increasing their membership numbers by as much as 90%.

“It’s a community that nobody knows about,” he said. “When you ask Germans where Jews come from, they think of Israel or America.”

A Jew who hits back

Khaet also wanted to broaden the identity of German Jews on screen.

Early in “Masel Tov Cocktail,” 16-year-old Dima slugs a classmate in the face for making a Holocaust joke. His parents urge him to apologize, but he holds out for as long as he can.

“Jewish characters in German media are always cliches, stereotypes, and the narrative is always about the confrontation between the perpetrator and the victim,” Khaet explained. “They’re always about topics like the Shoah and anti-Semitism.”

He pointed to the Jewish police commissioner on the show “Tatort” as a rare example of a non-cliche Jewish character in the German media.

“We wanted to show a Jew who hits back and isn’t a victim,” Khaet said.

RELATED: In Germany, the rise of anti-Semitism and other extremism has Jews questioning their future

The “we” refers to his co-director Paatzsch, who is not Jewish. Akadij and Paatzsch first met in Cologne while studying film in 2010. “Masel Tov Cocktail” is their third project together.

Paatzsch described Khaet’s vision as an “essay film,” a collection of notes he’d written over the years about his experiences with Germans and his Jewish identity.

The script was in its third draft by the time Paatzsch came to the project. He thought it had potential but questioned why Khaet would want him, a non-Jewish German, to be involved.

“It’s a little bit like a running mate,” Khaet said. “I had the feeling that we could simply make a better film with four eyes and two directors.” 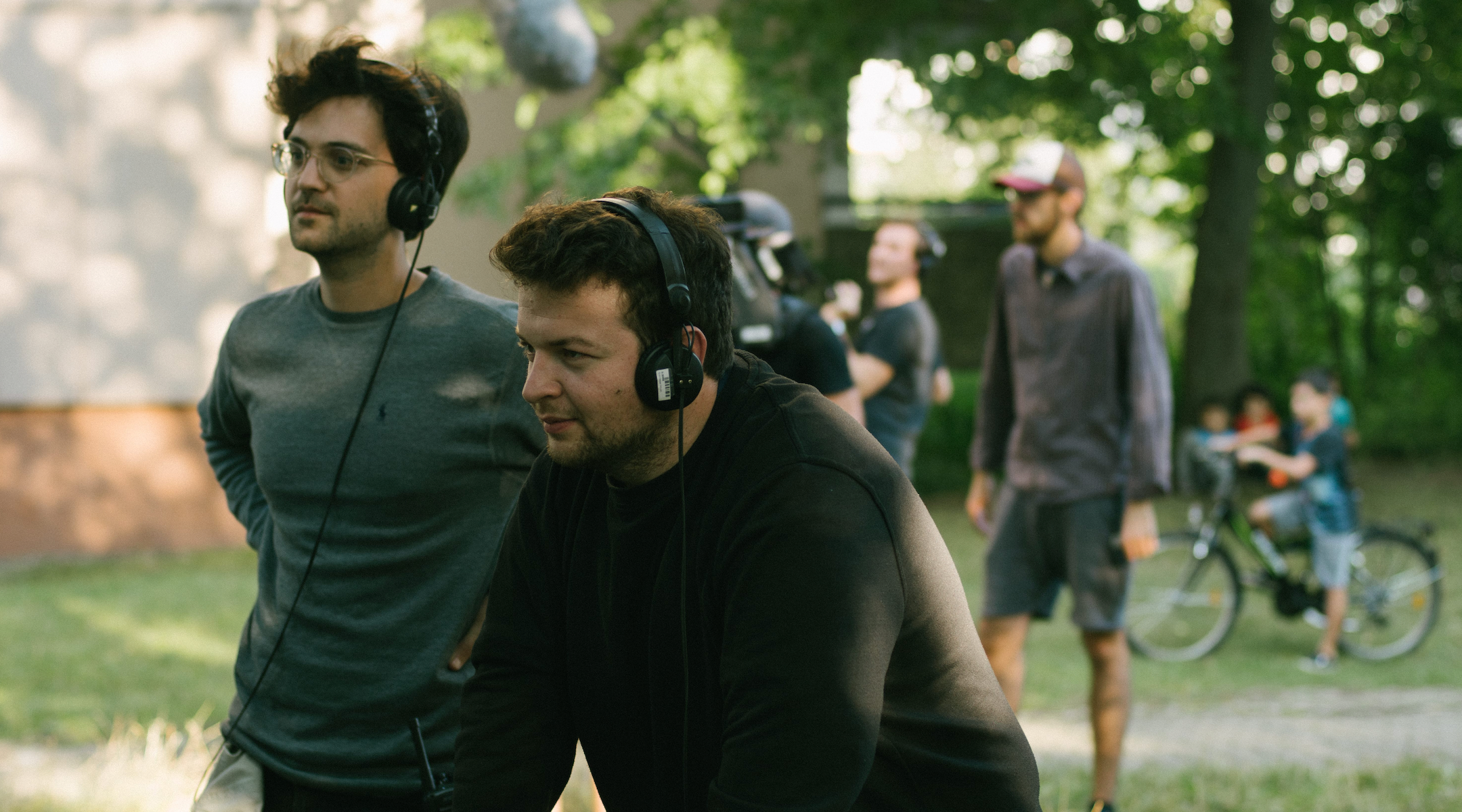 A “privilege to be angry”

The response to their collaboration has been overwhelmingly positive, something that surprised both filmmakers.

“We thought the film would be polarizing and that non-Jewish viewers would feel too attacked to like the film,” Paatzsch said.

The film was also featured at the 26th Jewish Film Festival Berlin & Brandenburg in September, bringing the story to a predominantly Jewish audience for the first time.

“What really pleased me was the approval from the Jewish community,” Khaet said. Fans of the film have written, thanking them for offering a different kind of representation.

Khaet believes this different Jewish perspective will only continue to grow in Germany because of Jews who have grown up in Germany, gone through the German school system, and are now becoming artists and using their art to explore their identity.

“It’s a privilege to be able to afford to be angry,” he said, referring to his ability to write an “angry Jewish” character set in contemporary Germany. “That’s a privileged position that took years to come by.”

Khaet sees the variety in which Jewish characters can be represented in the German media happening alongside the diversification of Jewish groups in the country. He points to the Ernst-Ludwig Ehrlich Studienwerk, Keshet Deutschland and the Jewish Student Union as examples of organizations younger than 10 years old that help support pluralistic Jewish life in the country.

“Twenty years ago, you only had community life and one organization representing Jewish life in Germany, like the Central Council of Jews in Germany,” he said. “Today, especially in larger cities, you have multiple opportunities to network and to live your Jewishness differently than only through the roles of remembrance and religiosity.”