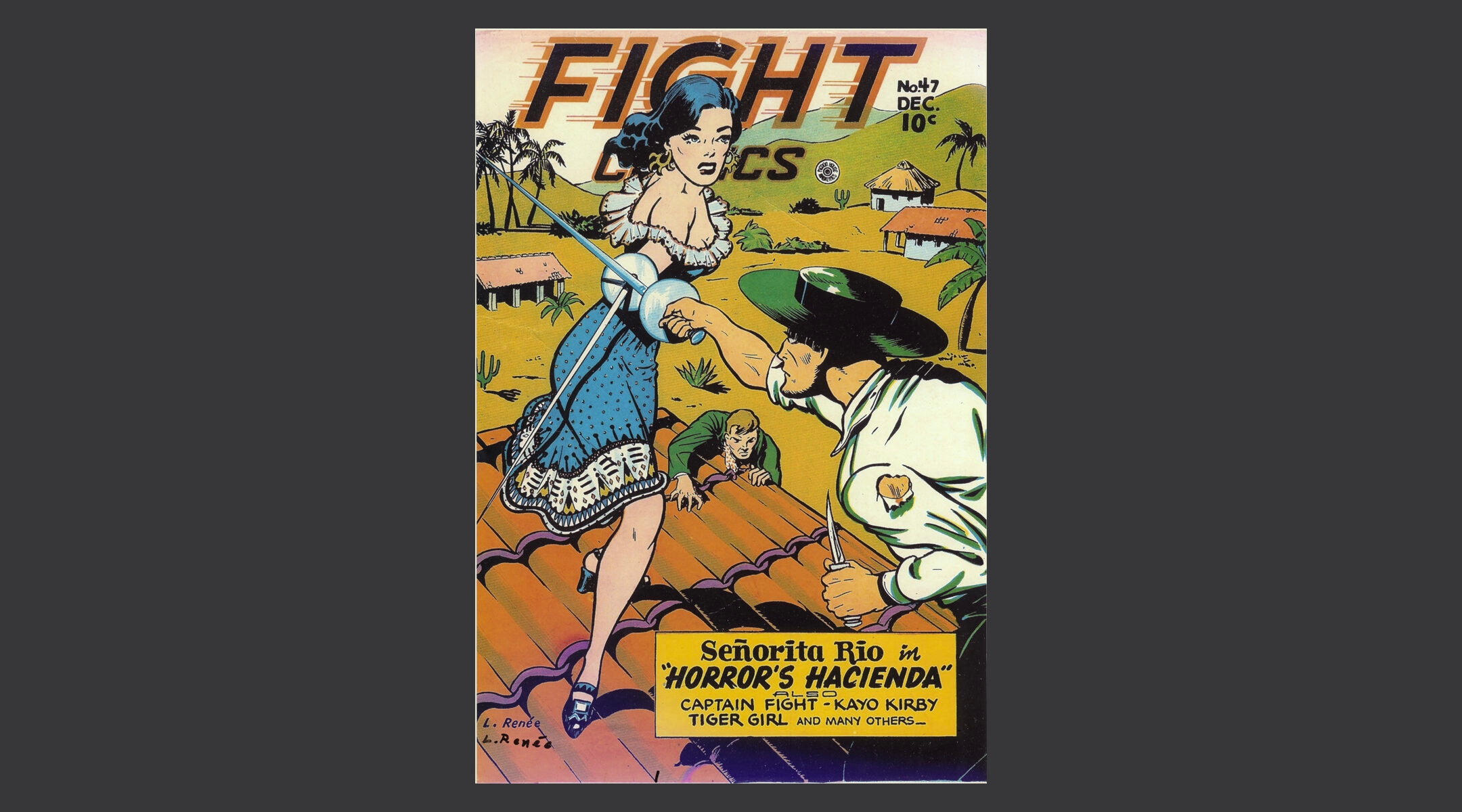 Although lesser known, the comic book heroine Señorita Rio was Hollywood starlet Rita Farrar by day and Nazi-fighting secret agent by night. The artist who drew Rio’s action-packed panels in the 1940s, and signed as L. Renee, lived a sort of double life, too.

“Everybody assumed I was a man,” artist Lily Renee Phillips has said of the fan mail she received at the time, which was always addressed to “Mr. Renee.” Fans knew neither Renee’s gender nor her incredible origin story, which rivaled the plotline of Señorita Rio.

In the New York offices of Fiction House, the comic book publishing firm where Renee worked, she was a scrappy immigrant who worked her way up from erasing pencil marks to drafting her own heroines. Outside work she was a Vienna-born Holocaust survivor who fled Austria after the 1938 Anschluss, the Nazi annexation of Austria. She escaped to England on a Kindertransport and reunited with her parents in New York in 1940.

Unlike her co-workers, who genuinely loved the comic world’s clearly outlined arena of villains and justice-seeking vigilantes, Renee was just trying to make a living by doing something she had always done: draw.

Those drawings will be on view in an exhibition opening Thursday at New York’s Austrian Cultural Forum. “Three with a Pen” highlights three Jewish cartoon artists who grew up in Vienna and escaped to safety after 1938: Renee, Paul Peter Porges and Bil Spira. The exhibit originally appeared at the Jewish Museum Vienna in 2019.

Renee’s pen and ink sketches have traveled to the birthplace she fled at age 17 and have returned to her adoptive home of over 80 years, where she still lives and will celebrate her 100th birthday in May. 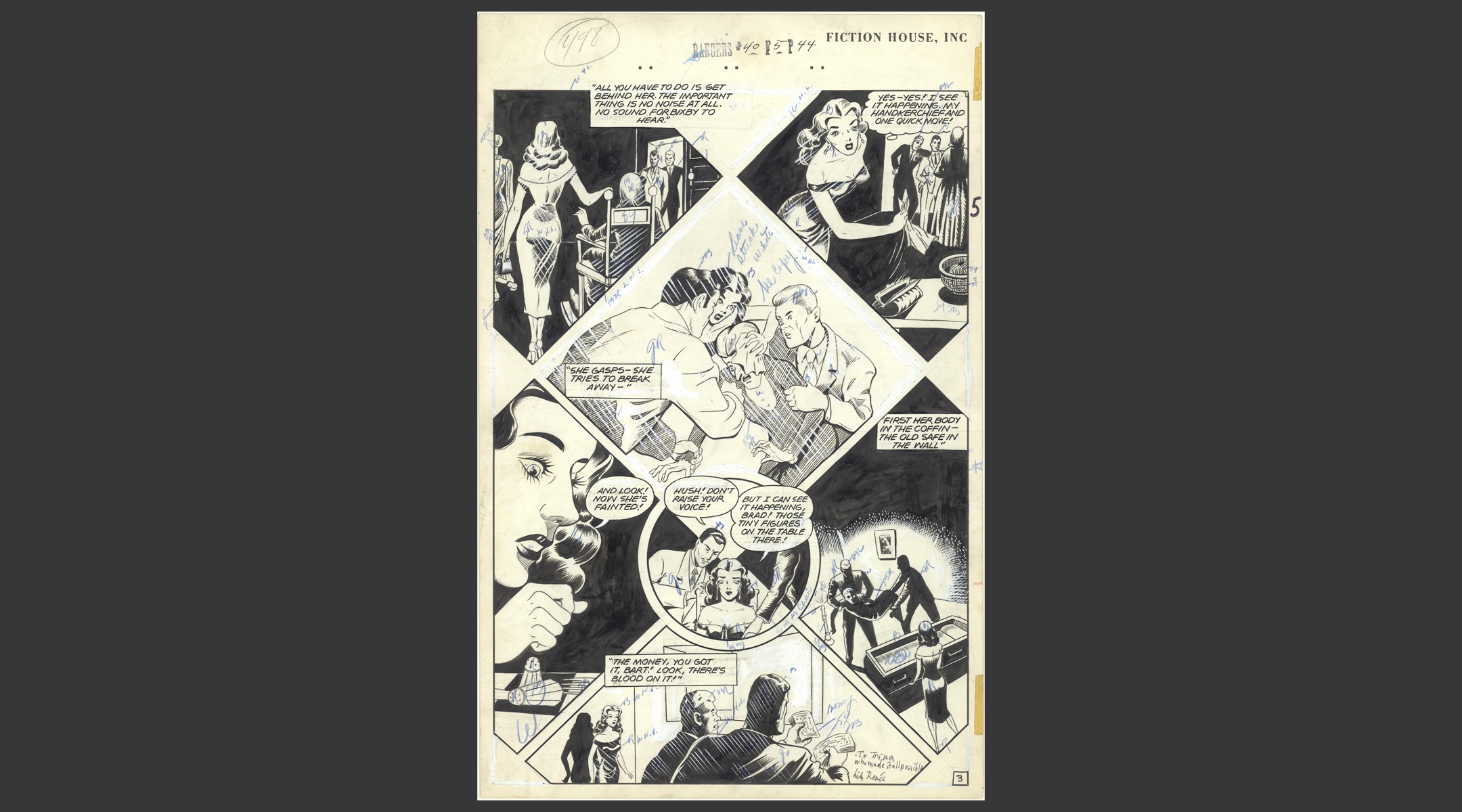 A marked up page of Renee’s “The Werewolf Hunter” series. (Lily Renee)

Although she was unable to speak to a reporter, her daughter and colleagues spoke about her improbable life. Renee, they said, still remembers drawing under her family’s dining table as a child in Vienna, sketching ballerinas and costumed performers she had seen at the theater. A decade later in New York, she used these drafting skills to support herself and her parents, who surrendered their assets to Nazi authorities in Austria and were sharing a small Upper West Side apartment. She started out decorating wooden boxes for a shop, then drew publicity materials for Woolworth’s department store.

One day Renee’s mother saw a newspaper notice advertising that Fiction House was looking for illustrators and encouraged her daughter to apply. Renee took a drawing she’d made of Tarzan and Jane to her interview, and was hired after a brief trial period.

Beyond her artistic talent, Renee’s comic book career was partially a case of being in the right place at the right time. The American comic industry, which had been booming since the 1930s, was concentrated in New York. The 1940s were also the golden age of comic books, and the same war that rendered Renee a refugee also opened up illustration jobs as more men joined the service.

“Before World War II, women comic artists were a very rare breed indeed,” said Michael Freund, a co-curator of “Three with a Pen.” “It was mostly the turf of hungry young guys.”

Meanwhile, soldiers on the front lines were keen to have distracting reading material.

Renee’s first assignments at Fiction House were menial, like painting in backgrounds. But she worked her way up, and the first heroine she was assigned to draw on her own was Jane Martin, a brave wartime nurse.

“Her breakthrough came when she embellished — in every sense of the word — the character of Señorita Rio, a spy and secret agent for the Allied forces,” exhibition co-curator Sabine Bergler said. “Rio was not invented by Lily, but she contributed to the storyline and to the specific characteristics of the heroine — who was also a projection of her own desire to fight the fascist powers.” 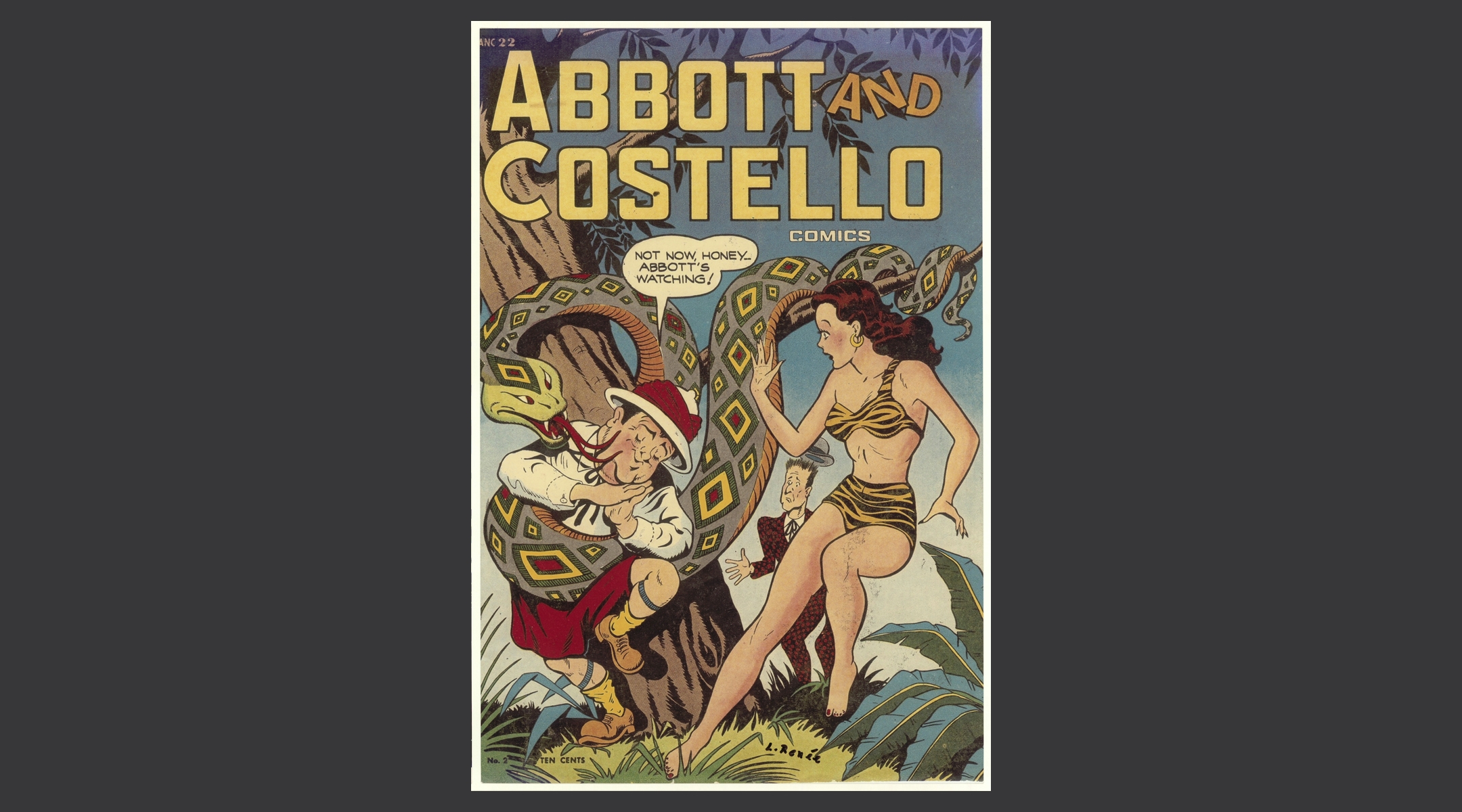 A cover Renee drew for an Abbott and Costello comic from 1948. (Lily Renée Collection)

Her colleague Nick Cardy conceived Rio, but Renee shaped her look: an athletic brunette who scrapped with Nazis and their allies in Latin America.

“I could live out a fantasy, if only on paper,” Renee told Freund of illustrating this fierce female spy, who was fighting the artist’s own persecutors on the page. “It was a form of revenge.”

Ultimately, Renee doesn’t call her work on Señorita Rio and other comic heroines the crowning achievement of her nearly century-long life.

“She was an artist, first and foremost,” said Nina Phillips, Renee’s daughter.

Phillips grew up watching her mother paint, but didn’t learn about her comic book illustrations until she was a teenager and opened the wrong drawer — one filled with her mom’s old paneled sketches.

“Drawing comic books was not looked at as a proper profession at all,” Phillips said. “She really erased it from her life, and she pursued all sorts of other creative endeavors.”

Starting in the 1950s, Renee worked as a freelance artist and textile designer. She took writing courses with Philip Roth, and wrote plays and children’s books. She befriended contemporary artists, including the photographer Diane Arbus. She was still drawing and painting until a few years ago.

Regardless of how Renee might introduce herself, her unique standing as one of the few female artists of the golden age of comics has been revived in recent years. Comic historian Trina Robbins rediscovered her in 2005 and turned Renee’s life into a graphic novel. Renee has been invited to speak at Comic Con panels, received belated awards and has been the subject of a short documentary. 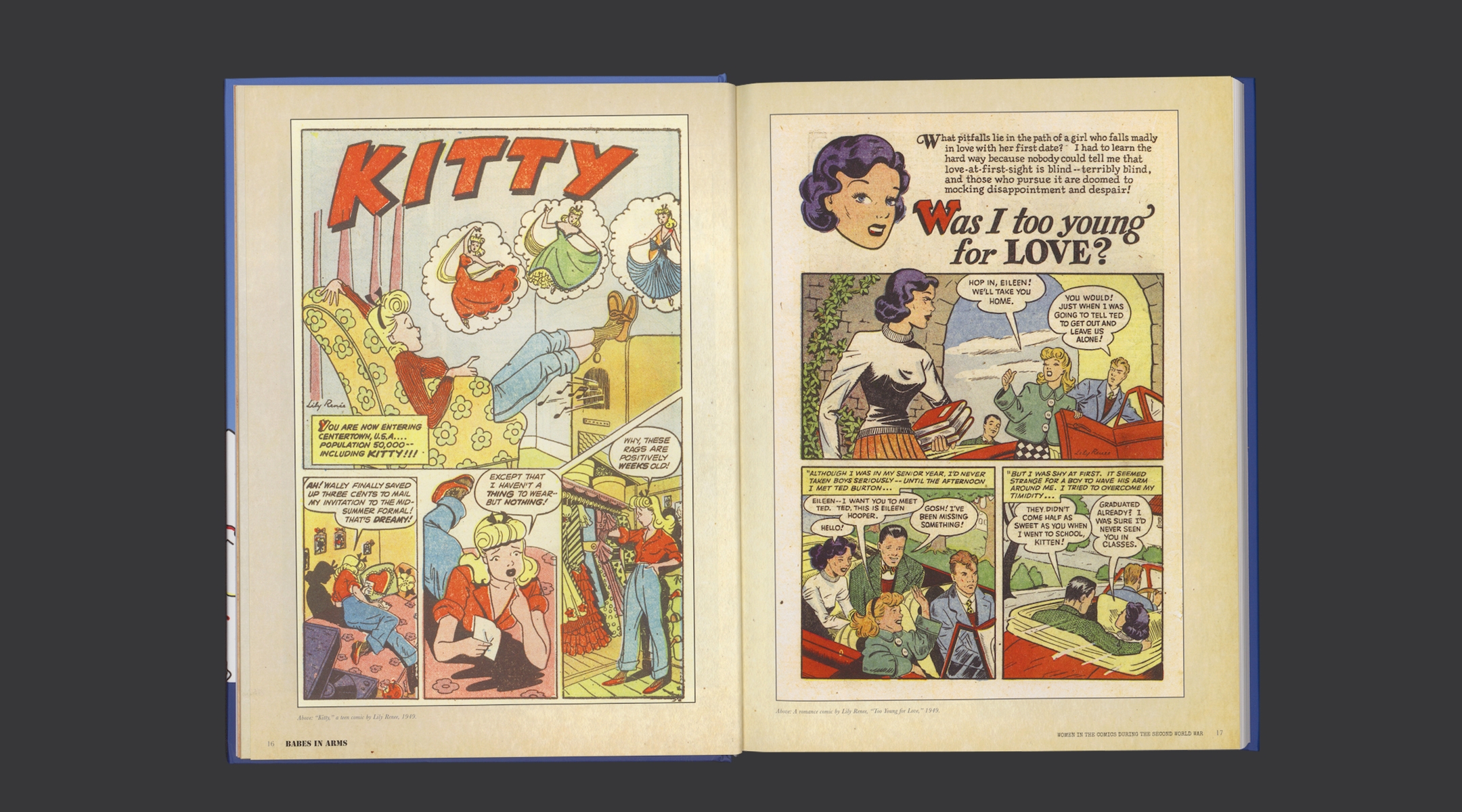 A look inside a “Kitty” comic strip from 1949 drawn by Renee. (Lily Renée Collection)

To a generation of fans hungry for more comic heroines in print and onscreen, Renee represents a matriarchal superpower no less than Wonder Woman.

“She shied away from the word ‘feminist,’” Phillips said of her mother. “But she absolutely was.”