An Israeli woman was murdered by her husband. It sparked a national reckoning over domestic violence. 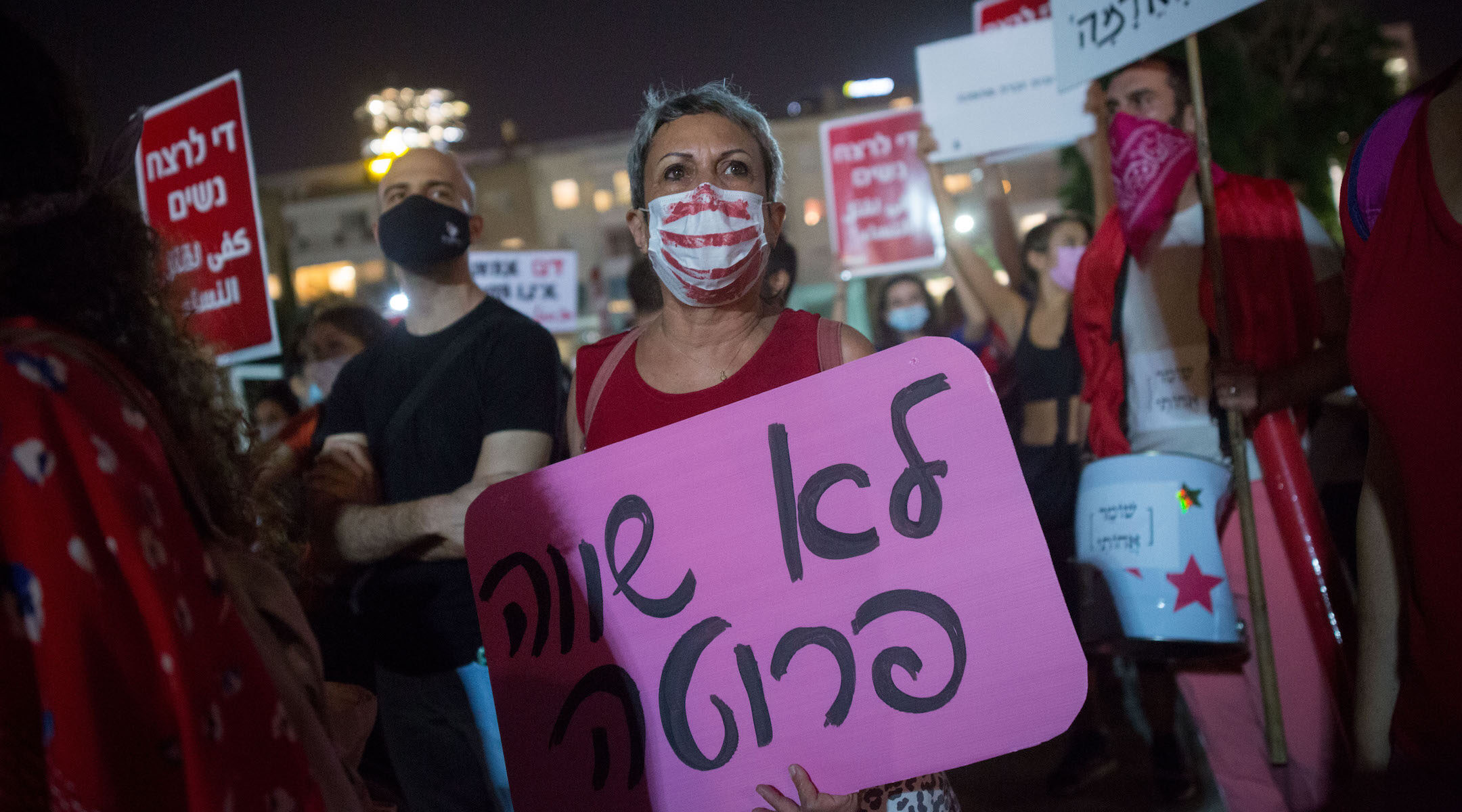 TEL AVIV (JTA) — The murder of Diana Raz was almost too horrific to describe.

Raz, 35, an Israeli couples counselor who helped women in abusive relationships, got into an argument with her husband, Amir, on Feb. 5, according to the police indictment against her husband. Amir, a police officer, proceeded to tie up three of their four young children. The youngest, a baby, was in his high chair beside them.

Amir then began to beat, strangle and stab their mother before their eyes as she screamed for help. When their oldest child, a 7-year-old, broke free and ran for the door of their home in the West Bank settlement of Naale, Amir grabbed her and hurled her down the stairs. When Diana tried to flee, he shot and killed her.

The murder sent chills throughout the country, including among the thousands of women who had turned to Raz for relationship guidance online and in person.

Like other countries, Israel has experienced a rise in domestic violence during the COVID-19 pandemic, as women have been forced to stay home under lockdown with abusive partners. But the murders of Raz and other women have sparked an outcry in Israel.

Demonstrations and candlelight vigils across the country have drawn public attention to the issue of domestic violence, and even Prime Minister Benjamin Netanyahu opened his weekly Cabinet meeting following Raz’s death by saying that she was a “source of inspiration to very many women.”

“We will make every effort to ensure the peace and safety of every woman in Israel,” he pledged.

Israeli women’s rights activists have long said that the country pays too little attention to domestic violence and warn that things have worsened over the past year. In response, the government has taken a series of steps to counter domestic abuse — including opening new women’s shelters and making it easier to report abuse. Activists say still more must be done.

“Many of the men are unemployed, they’re at home, there’s friction, there’s tension,” said Ruth Rasnic, who founded the organization No2Violence Against Women in 1977. “When violent men or men with violent potential feel helpless, they let it out on women and children.”

A string of statistics shows that domestic abuse in Israel has spiked since the pandemic began. Calls to the hotline run by Rasnic’s organization have increased by over 300% over that period, and calls to a government domestic violence hotline have more than doubled. Police say they have also opened more domestic violence cases than in past years.

During the same time frame, cases of sexual abuse have risen by 33% and reports of sexual abuse of children by family members have nearly doubled, according to the Association of Rape Crisis Centers in Israel.

“We knew we would get an increase in calls regarding domestic violence because families are closed inside their homes,” said Ayala Meir, who heads the Welfare Ministry’s Department of Family, Children and Youth. “The house turns into a pressure cooker that can be very dangerous for women and children.” 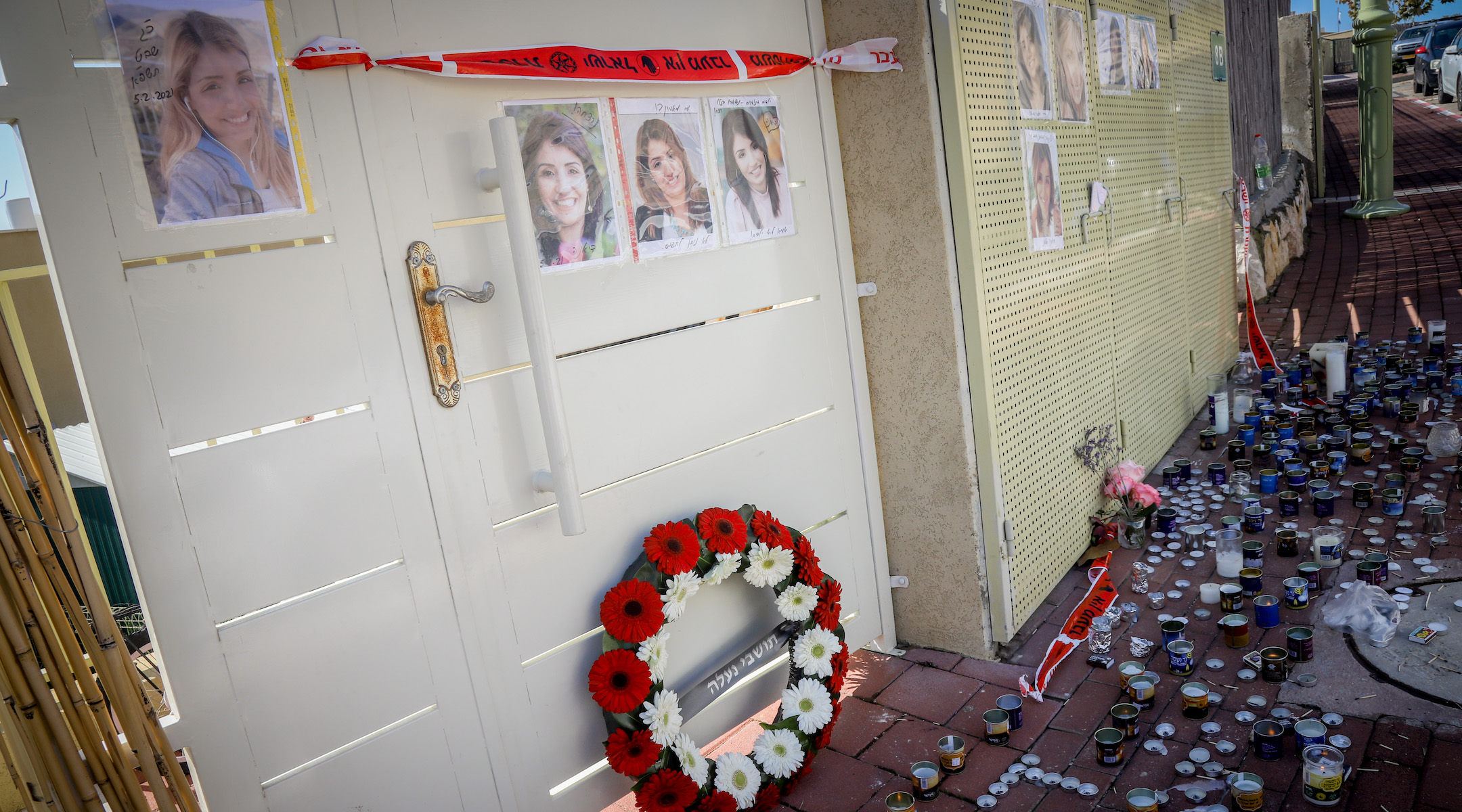 Candles sit beside pictures of Diana Raz outside her home in the West Bank settlement of Naale, Feb. 7, 2021. (Avi Dishi/Flash90)

Rasnic, who received the Israel Prize in 2009 for her work combating domestic violence, estimates that approximately 25% of Israeli women have been or are in an abusive relationship. That’s about the same as the proportion in the United States, according to the National Coalition Against Domestic Violence.

Raz was one of four Israeli women killed by a partner or family member since the start of 2021. Last year, 25 women in Israel were killed by their domestic partner or someone close to them.

Advocates against domestic violence say the state hasn’t done enough to protect victims. According to government data, a third of women killed by their partners in 2018 and 2019 had previously filed police complaints against the men accused of killing them. Six of the suspects in such murders between 2018 and 2020 had previous convictions related to domestic violence.

“Israel considers itself very modern and forward thinking, but at its heart this is a very conservative and religious society,” said Yael Sherer, director of the Survivors of Sexual Violence Advocacy Group. “We just don’t deal with it as well as other countries.”

Sherer, a survivor of child sex abuse by her father, has called for longer prison sentences in sexual abuse and domestic violence convictions. Currently there is no minimum prison sentence for rapists in Israel, and the maximum sentence is 16 years. Sherer’s own father served just two years of a three-year sentence for abusing her.

When Sherer took her father to court in 2008, the state did not allow the publication of the names of sexual abuse victims without the permission of a judge. That prevented Sherer and others like her from speaking out or giving interviews to the press. The law was changed some three years ago following a campaign by activists.

“For us to say who we are and what we are is a very big deal,” Sherer said. “If it’s illegal for us to speak, then it’s quite logical for people to think this does not exist in Israel. Victims should not be shamed.”

This isn’t the first time that domestic abuse has been on Israel’s national radar. Following a wave of domestic murders in 2018, thousands of women across Israel protested and went on strike to protest the government’s failure to adequately confront the crisis. At the time, Netanyahu told lawmakers he was surprised to learn that “almost nothing” is done to punish domestic abusers, but he also voted against a parliamentary effort to investigate violence against women because it had been introduced by his political opponents.

A government plan to tackle domestic violence had been approved in 2017 with a budget of about $75 million. But as of June 2020, the vast majority of that money had not yet been transferred to the relevant government agencies.

“We are a very young society with very many problems, and this is the result,” she said. “In Israeli society, security is the No. 1 issue. We live in a hostile place and so security comes first. The remaining budget goes to issues with powerful people behind them.” 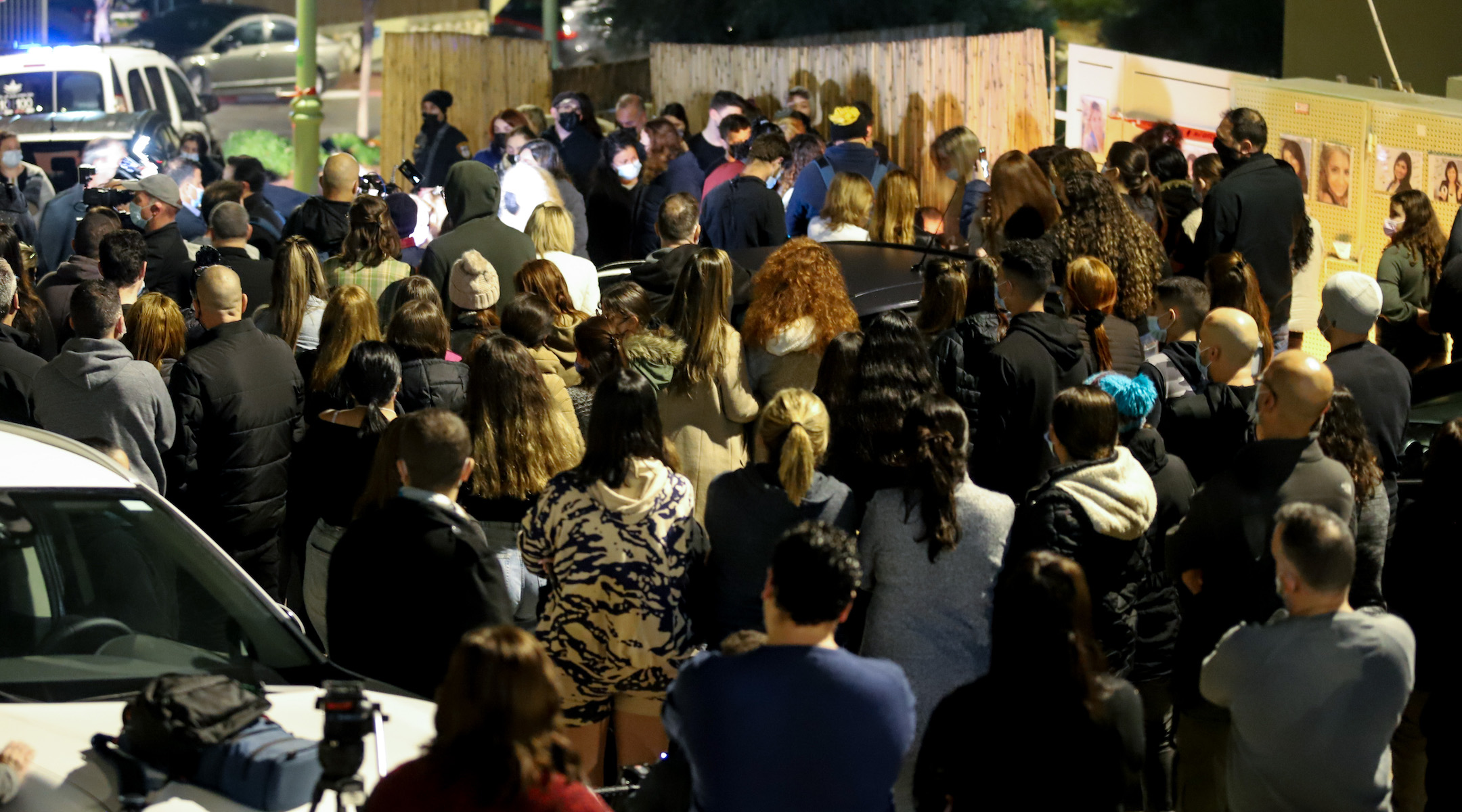 Family and friends gather outside the home of Diana Raz, who was murdered days earlier by her husband at their home in Na’ale, Feb. 6, 2021. (Avi Dishi/Flash90)

In the year since the pandemic began, the government has appeared to take violence against women more seriously. Israelis are now able to file police complaints online, and domestic violence complaints are prioritized to be treated immediately. According to Dana Ben Zvi, head of the Israel Police domestic violence squad, social workers now assist officers in cases of domestic violence, and special family affairs units have been created within police departments to treat those involved.

As of October, a woman is placed on an at-risk list if the man who abused her is released from prison.

“We call her every week or two, as does the Welfare Ministry, and she stays on this list for at least three months,” Ben Zvi said.

The Welfare Ministry has opened two new shelters for women since the onset of COVID, bringing the total across Israel to 16, a number activists say is still not high enough. Each shelter can house up to 12 women and their children.

The ministry has also opened 60 new domestic violence departments in community centers throughout Israel, bringing the total of such centers run by the Welfare Ministry to 170.

The Welfare Ministry also made it possible during the pandemic for women to reach the domestic violence hotline by text message rather than calling, since in many cases their abuser is within earshot. The ministry also launched “i-Risk,” a digital questionnaire to help people in abusive relationships assess their risk and receive guidance.

“The goal of the ministry is not to put women in shelters, but to prevent the violence that endangers women so much that they need to go to a shelter,” said Meir, the Welfare Ministry official, adding that shelters are typically a last option for women in cases of life or death, and that the community centers are staffed by social workers who treat men, women and children.

But she added that there is only so much her department and other government agencies can do.

“Whenever a woman is murdered, immediately everyone says, ‘Where was the police? Where were the welfare authorities?'” she said, adding that half of the women who were murdered by their partners in previous years were unknown to the authorities.

“Even a woman like Diana, who knew all the red flags, who knew all you need to know, who referred other women to treatment,” couldn’t foresee the danger she was in, Meir said. “From this case you can really see how difficult it is for many women to see that they themselves are in danger.”

Naamat’s Levin wants the country to do more to treat abusers as well as victims. She said Israel should take the lead of other countries in requiring men who have abused their partners to enter counseling.

“You can’t treat this problem without treating the man,” she said. “For most men and women who suffer domestic violence, it’s a transgenerational problem. They grew up in homes with domestic violence. And the children suffer so much, they can’t sleep because they’re worried about their mother, they’re afraid of their father and they live forever with this trauma.”