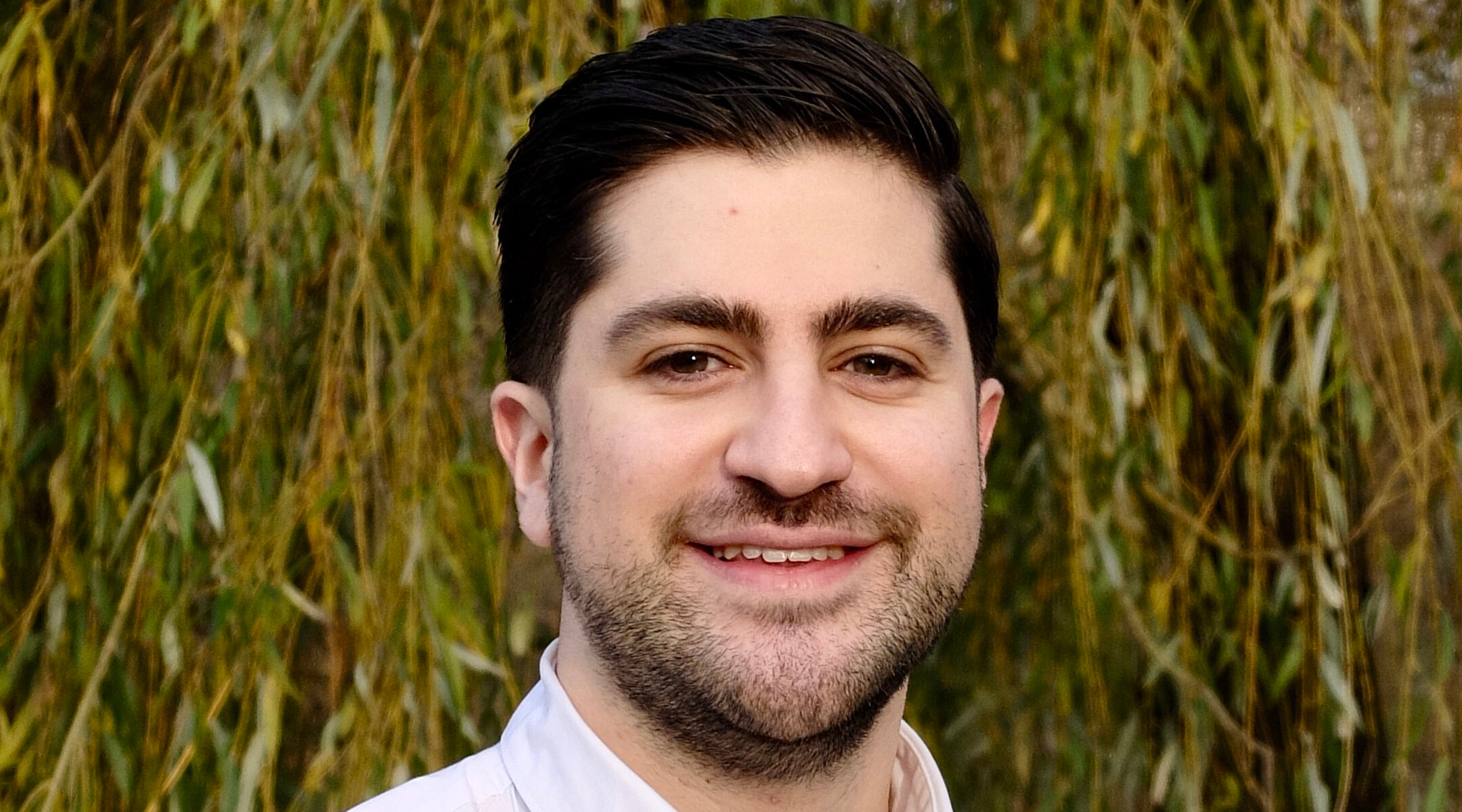 Itay Garmy said he once dreamed of becoming prime minister of Israel, but quickly became disillusioned in his new country by its polarized politics and headed home. (Courtesy of Garmy)
Advertisement

AMSTERDAM (JTA) — At 18, Itay Garmy made an unconventional choice for graduates of his large public high school in Amsterdam: He moved to Israel with plans to join the army.

Garmy, whose parents met in Israel, entered a pre-military preparatory program in the Negev Desert with massive ambitions.

“I wanted to become the prime minister of Israel,” he recalled.

But he quickly became disillusioned by the country’s polarized politics and headed home.

“I spoke to people on the extreme left and the extreme right and realized peace was not feasible,” he told NIW, a Dutch-Jewish weekly, earlier this year. “I missed the Netherlands. I didn’t feel comfortable.”

Volt is a pan-European party with chapters in many countries that launched in 2017 after British voters backed Brexit. Its goal was to prevent further ruptures in the European Union. The party is galvanizing young voters especially to back a vision for a “United States of Europe,” and the Dutch election marks the first time its candidates have gained seats in a national parliament.

Garmy will not represent the party in the parliament — Volt would have had to win four times as many votes, something no one expected, for that to happen — but will continue to build it up. He said he was drawn to Volt’s vision because he is a Dutch Jew, an identity he embraced on the campaign trail even amid attacks from far-left anti-Israel activists.

The Dutch vote, in which the ruling center-right People’s Party for Freedom and Democracy of Prime Minister Mark Rutte reemerged as the largest and likeliest to lead in the coming four years, was widely seen as a referendum on the country’s handling of the COVID-19 pandemic. Garmy pursued campaign rhetoric calling attention to generational gaps, distinguishing Volt from practically all other parties.

“During COVID-19, young people were told to show solidarity with older people, who are more vulnerable to the virus,” Garmy said. “But older voters have not reciprocated. Climate, which is especially crucial to the young, has been sidelined in the programs of parties with older voters.”

Volt’s campaign under Garmy relied on reaching young voters at their hangouts during the COVID-19 pandemic, which has resulted in nighttime curfews in the Netherlands. On weekends, Volt campaigners toting boomboxes have camped out at food markets, one of the few commercial environments to remain open, and Garmy even made an appearance on Twitch, a streaming gaming platform, to appeal to Dutch voters there.

As Volt’s profile in the Dutch elections grew, so did criticism of the party. Those on the right called attention to the fact that the Open Society nonprofit started by George Soros, the liberal Jewish philanthropist who has supported pan-European causes, gave $25,000 to support the party’s founding. Meanwhile, far-left activists picked up on Garmy’s connection to Israel, accusing him of being a “Zionist activist” and an “Israeli stooge.”

Garmy said the attacks on him on Twitter “symbolize exactly the kind of old politics, the old thoughtless dogmas of right vs. left” that made him join Volt in the first place. He responded by emphasizing his identity, writing a blog post on Volt’s website describing himself as “young, Jewish, Israeli, secular, politically engaged and Dutch.” On Twitter, he lamented that he should “come under attack for the combination of my identities.”

His response reflects Volt’s hands-off approach to the Israeli-Palestinian conflict, which many other progressive parties have made a central issue in their foreign policy.

“It’s just so far away from what Volt is about, that having this discussion is not relevant,” he told JTA.

Garmy is personally critical of many of the policies of Israeli Prime Minister Benjamin Netanyahu, and Volt favors a two-state solution for the conflict. But the party “is very careful not to leap headfirst into a debate where precious few of us have any semblance of a local connection to Israel or Palestine,” said Joel Boehme, a Swede who sits on Volt’s international board.

It’s a lesson learned from the Labour Party in the United Kingdom, Boehme said, where involvement in the conflict started out of “genuine wish for social justice, and then got perverted into anti-Semitism so horrifically fast.” Boehme is not Jewish.

Before he joined Volt, Garmy, who studied political psychology and worked as a cybersecurity consultant, supported the Dutch Labour Party, the political home of many Dutch Jews.

“But I increasingly became disappointed with Labour,” Garmy said. “It does politics in an old-fashioned way. I think we need to rethink how we do politics more broadly, for a new generation.”

Garmy is used to veering off the beaten path. As a teenager he left the Maimonides Jewish high school of Amsterdam, where most of his friends studied, mere months after beginning his studies there.

“It felt too much like a Jewish bubble,” he told NIW. “I moved from a school with 100 students to a learning factory with 2,000 students from different backgrounds.”

Garmy’s family has been in the Netherlands for decades. His father, an Israel-born Sephardic Jew of Yemenite descent, and mother, an Ashkenazi Jew born in Brazil, had moved there from Israel, where they met. Even after leaving his Jewish school, Garmy, who has a brother and a sister, remained an active Jewish community leader, becoming the chairman of the Habonim Netherlands Jewish youth movement and the representative of young Jewish community members with the Central Jewish Organization of the Netherlands.

As a political activist, Garmy has adopted some positions that are at odds with some interests of the Netherlands’ Jewish community. He wants to end the public funding for religious schools like the ones he attended. He also opposed the Dutch government’s decision to name a special rapporteur for the fight against anti-Semitism, arguing that this form of hate should not receive special attention over others.

“I understand that we Jews because of our history look at anti-Semitism differently than at discrimination, but that doesn’t justify a separate approach. What if every other minority group gets their own anti-discrimination coordinator?” Garmy wrote in a column for NIW.

“I don’t get the feeling that Itay or Volt, which is essentially a left-wing progressive party with an EU emphasis, represent the interests of the Jewish community or Israel in any meaningful way,” said Esther Voet, NIW’s editor in chief. “But we’ll have to wait to know anything more because right now they’re the new kids on the block.”

Garmy and Volt have drawn skepticism from some progressives, including some politically engaged Dutch Jews.

“As a Dutch Jew, I’m afraid of placing a lot of power in one central government, even if it’s democratically elected and especially if it’s less democratically elected, as the EU tends to be,” said Nathan Bouscher, a political activist who was a candidate this week with the progressive Libertarian Party, which is skeptical of the EU. The Libertarians did not win any seats.

Garmy’s enthusiasm and idealism are infectious and “remind me of myself,” Bouscher said. “But there is a reason that the European Union’s popularity is diminishing. Instead of thinking of real solutions, Volt is merely doubling down to offer us even more of the same.”

Garmy is clear-eyed about challenges with the European Union, which he said included “unnecessary bureaucracy and problems of democratic representation.” (The bloc, whose policies are determined largely by bureaucrats and internal discussions, has been taking flak over a perceived democratic deficit since its very inception.) But Garmy believes they can be addressed without giving up on the European project entirely.

Dutch voters this week appeared largely to side with that thinking, giving the People’s Party for Freedom and Democracy the most seats, allowing Rutte to cruise to a fourth term. The party had featured pushback against some EU policies in its campaign.

Meanwhile, the Party for Freedom, which favors a “Nexit” plan to follow Britain’s move and take the Netherlands out of the EU, lost seats and is now the third-largest party. Finishing second was the left-wing progressive D66 party, which is close ideologically to Volt.

That leaves Volt in a good position to make an impact in the Dutch parliament, known as the Tweede Kamer.

We want to “reform the European Union, which has many problems in terms of bureaucracy and representativeness,” Garmy said. “It’s the only way to save the Europe we inherited from the previous generation.”