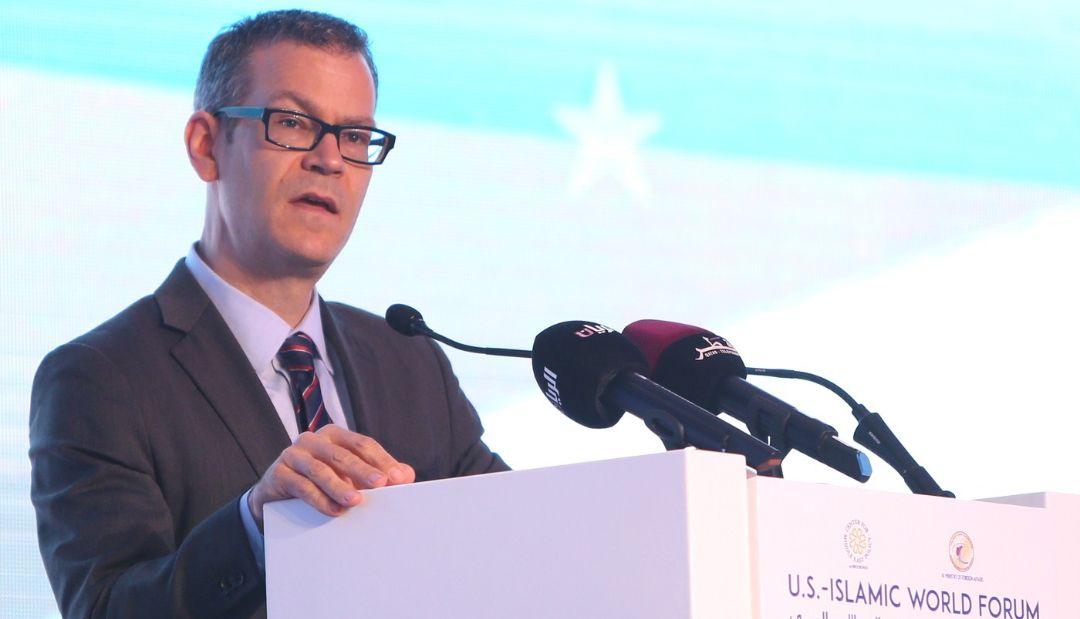 Colin Kahl, delivers a speech during a panel discussion as part of the US-Islamic World Forum in the Qatari capital Doha on June 1, 2015. (AFP via Getty Images)
Advertisement

WASHINGTON (JTA) — Three leading Israeli generals who worked with President Joe Biden’s nominee for the undersecretary of defense, Colin Kahl, are backing him amid a Republican campaign to sink Kahl’s candidacy over his involvement in shaping the Iran nuclear deal.

Kahl’s nomination is on ice this week as the Biden administration considers whether it can squeeze his nomination past a divided Senate. West Virginia Democratic Sen. Joe Manchin, a moderate who would be the deciding vote, has said he is undecided on Kahl.

Christians United for Israel is blitzing West Virginia with ads to get Manchin to kill Kahl’s nomination. The group and others say Kahl, who was a senior defense and security official with the Obama administration, would not be a friend to Israel in his new role.

Much of the focus of Republican ire is on Kahl’s role in shaping the 2015 Iran nuclear deal, which traded sanctions relief for a rollback of Iran’s nuclear program. Israel opposed the deal, and Trump pulled out of it. Biden has says he wants to return to it, but also to toughen it up, and Republicans are seeking avenues to influence how Biden moves forward. Targeting Kahl is one strategy.

Now, Israeli officials who worked with Kahl during the Obama years are openly throwing their support to him, saying that he was instrumental in the early Obama years in securing funding for Israel’s Iron Dome anti-missile defense system and was dedicated to preserving Israel’s qualitative military edge.

“Attacking Colin Kahl for not being a friend of Israel is attacking the wrong target,” Gadi Shamni, who was the military attache in Washington from 2009-2013, told the Jewish Telegraphic Agency. “I worked with Colin during my tenure in Washington DC. He expressed strong support for Israel and the Israeli position, for Israel’s defense, for protecting Israel’s QME, which is something is entrenched in U.S law, but without the right people it won’t be done properly.”

Shamni was one of three Israelis, all generals who worked in top national security positions during the Obama years, to make themselves available to support Kahl. The others were Amos Gilead, who was from  the director of policy and political-military affairs at Israel’s defense ministry from 2013 to 2017, and Amos Yadlin, who headed military intelligence from 2006 until the end of 2010.

All three said they opposed the Iran nuclear deal, which was the sorest point of tension between the Netanyahu and Obama governments.

But each said that Kahl was among the Obama administration officials who were attentive to and respectful of Israeli wariness of any deal with Iran. Kahl was the deputy assistant secretary of defense for the Middle East from 2009 through 2011 and Biden’s national security adviser, when Biden was vice president, from 2014 through the end of the Obama administration.

Shamni remembered Kahl as being one of trio of top defense officials who were a friendly “bridge” to the Obama administration at a time when its relations with Israel were otherwise tense.

“Colin, Michele Flournoy, and Mike Mullen were a trio that supported Israel tremendously,” he said. Flournoy was undersecretary of policy, the position Kahl is seeking now; Mullen was the chairman of the Joint Chiefs of Staff.

Gilead said Kahl’s closeness to Biden was an asset. Referring to Kahl’s role in preserving Israel’s qualitative military edge, Gilead described as deceptive the conventional wisdom that Obama’s relations with Israel were necessarily a deficit and that Trump, who drew close to Israeli Prime Minister Benjamin Netanyahu, was a net positive for Israel.

“Obama did not allow F-35s and armed UAVs to Arab countries, in spite of the vested interest of United States to export weapons,” he said, referring to stealth combat jets and unmanned aerial vehicles. “It’s a matter of huge money that goes to manufacturers and workers in the states. And Trump, considered our best friend, took the immediate decision to sell F-35s against any professional advice. Now Biden has frozen those sales.”

The Trump administration had reached a deal to sell the F-35s to the United Arab Emirates, part of a quid pro quo for normalizing relations with Israel; Biden has frozen the deal.

The Iran deal was the sorest point of tension between the Netanyahu and Obama governments, in part because Obama did not always consult with Israeli officials, a strategy that Biden’s Secretary of State, Antony Blinken, said he would not replicate.

Yadlin said Kahl did not play a role in concealing US policy. “Unlike others, he put forward his arguments frankly and professionally,” he said. “He did not work behind your back.”

He added, “I appreciate a lot his professionalism, I appreciated the way he argued a case, I didn’t always agree with him, but I have no doubt his motives were positive and he cares about Israel’s security and interest.”

The nomination’s impasse has also drawn statements of support for Kahl from Obama-era officials who are seen as close to Israel.

“I worked with Colin Kahl during the Obama Administration,” Dennis Ross, Obama’s top Iran adviser in his first term who is now a counselor with the Washington Institute for Near East Policy think tank, said on Twitter. “Few people were or are more thoughtful or professional in their approach. As for Israel, he took its security needs very seriously and valued his discussions with Israeli officials. The attacks on him are profoundly wrong.”

Daniel Shapiro, Obama’s ambassador to Israel posted on Twitter a list of Kahl’s contributions to Israel’s security, including his role in securing funding for Iron Dome.

Abe Foxman, the national director of the Anti-Defamation League through much of the Obama years, who last year ditched a commitment to nonpartisanship to endorse Biden, also came out in Kahl’s defense.

“There is nothing in @ColinKahl’s record that merits the charge of being ‘anti-Israel’ and much work that disproves it,” he tweeted. “It is wrong to use such smears against dedicated public servants who work to advance US interests and the US-Israel alliance.”

The other Republican complaint about Kahl has been his outspoken criticism of Republicans on Twitter; Manchin nixed Biden’s nominee for the Office of Management and Budget, Neera Tanden, for her scathing remarks on Republicans and some Democrats. Kahl, Manchin has said, was relatively subdued compared to Tanden.