Growing up in Iran, I thought the whole country celebrated Passover 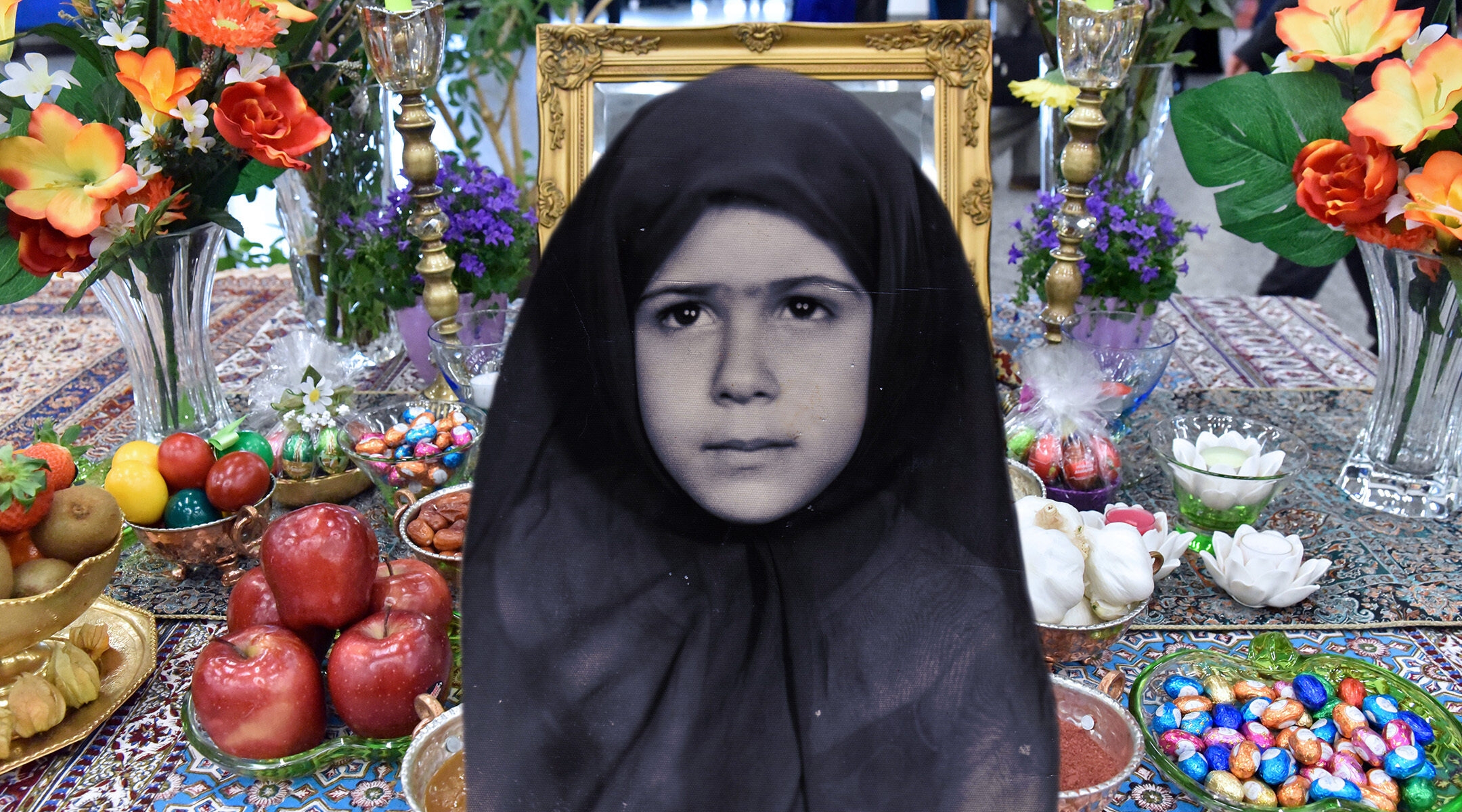 Foreground, author Aylin Sedighi Gabbaizadeh is shown as a child in Iran. The background displays a traditional haft-seen table marking the Iranian holiday of Nowruz. (Courtesy of the author; Flickr Commons)
Advertisement

(JTA) — Growing up in Iran, I never truly appreciated the difference between spring cleaning, New Year’s and getting ready for Passover. The Jewish holiday takes place almost simultaneously with the Persian New Year, known as Nowruz, when the whole country engages in a frenzy of preparations.

Nowruz (A New Day), which marks the beginning of spring, is Iran’s most festive and colorful holiday. Persians, Jews, Muslims, Zoroastrians and even Bahais all purchase new clothes, make traditional cookies and engage in 12 days of celebrations.

These celebrations include setting a special table, known as a haft-seen, that consists of various items signifying renewal, luck and blessings. The seven S’s, as they are known, would take their ceremonial places on the same number of plates: sabzeh (a green plate of grown wheat); seeb (red apples); samanoo (a wheat-based dish); senjed (a fruit of the lotus tree); seer (garlic); serkeh (vinegar); and sekkeh (coins laid in water). No table would be complete without swimming goldfish, an elaborate mirror to reflect joy to the viewer, hand-painted eggs and a holy book.

For years I believed Passover to be the beginning of the Jewish calendar because it was synonymous with all things new and a promise of starting afresh. Given the mild climate of the country, by the time the holiday came around, cherry blossoms were in bloom and the aroma of jasmine flowers filled our noses.

Just as the entire country went into full spring-cleaning mode for the national holiday, Jews scoured their homes of forbidden hametz, or leavened products. In our home, all the closets would be emptied and reorganized. All the rugs would be taken into the yard and washed in hot, soapy water in order to rid even the tiniest morsel of hametz. I knew Passover was close when my grandmother dug out her larger-than-life-size iron pot and started the process of kashering every item in her kitchen in boiling water.

My grandmother told me stories of stuffing her mattress and blankets with clean cotton — something I was thankful we no longer had to do. Nonetheless, the tasks were still endless, and everyone in the family was involved in the process.

Given that there were no kosher-for-Passover shops (or even kosher shops), every cake and cookie had to be made from scratch, a task that entailed the washing, drying and blending of all the needed nuts. The week before the holiday, the aroma of roasted nuts would fill the house, and the sweet smell of homemade cookies couldn’t summon the holiday fast enough. Given the lack of kosher products, we hardly consumed any dairy for the eight days, our diets consisting of eggs, meats and, according to Iranian Jewish custom, rice.

Our Muslim neighbors, too, were busy cleaning, readying themselves for the coming of spring. A Muslim family with whom we were particularly friendly would come over each Passover for a taste of matzah, saying how they looked forward to it all year. My father’s co-workers knew it was an auspicious time of the year for him and wished him especially well as he took a holiday for the Seders. In the market and in the streets, though, we kept quiet about our Passover preparations. We did not discuss details with strangers and those with whom we did not feel a connection.

The Seder itself brought its own associations and customs. At the end of each ritual meal, as we bid farewell to yet another holiday and sang “Next Year in Jerusalem,” the words had a deep significance for us. Our Seder table became quieter with each passing year, with so many family and friends already gone to other promised lands. We each wondered out loud when our turn would come to leave a country that treated us like second-class citizens, when we would find security and peace in other lands.

Over time, our entire extended family fled to Israel and the United States. My immediate family was the last of our clan to finally pick up and leave, in September 1990.

The story of Iran’s ancient Jewish community unfolds over more than 2,700 years, back to when the Jews were exiled from Jerusalem through to today, after most members of the community have relocated throughout the world. Today there are fewer than 10,000 Jews left in Iran, the largest Jewish community in the Middle East outside of Israel.

My Passover experience here is vastly different than the one I grew up with. Every year as I put away one set of dishes and bring out my Passover ware, I feel a pang of guilt at how easy it is is to get ready for the holiday compared with what my mother and grandmother had to do in Iran. The shelves of the supermarkets here are filled with kosher-for-Passover cookies, cakes, chocolates, sweets and dairy products. One could almost forget that we are experiencing a holiday that celebrates the Jews’ escape from slavery.

But I am forever grateful for the freedoms that I have been granted here, and to celebrate this most auspicious holiday alongside so many of our people.

Aylin Sedighi-Gabbaizadeh
is a writer who is working on her historical-fiction novel about the lives and trials of women and children in old Iran. Her articles have appeared on Kveller.com, The Jerusalem Post and aish.com. Her website aylinsedighigabb.com.
The views and opinions expressed in this article are those of the author and do not necessarily reflect the views of JTA or its parent company, 70 Faces Media.