With most votes counted in Israeli election, neither Netanyahu nor his opponents have majority 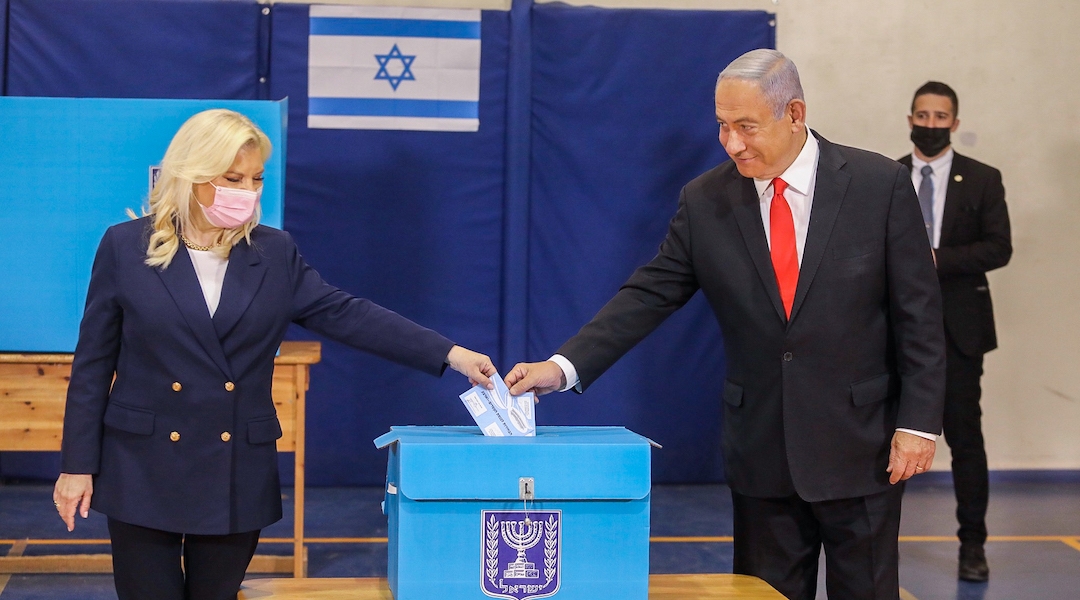 (JTA) — With the vast majority of votes counted from Tuesday’s Israeli election, it appears that neither Benjamin Netanyahu nor his opponents have a clear path to forming a government.

Preliminary exit polls had given the prime minister a good chance of being narrowly reelected. Israeli exit polls, however, have historically been unreliable, and this year they did not account for a significant percentage of votes cast.

The director of Israel’s Central Elections Committee, Orly Adas, announced that 450,000 absentee ballots remained to be counted, and that the committee hoped to publish final results Friday morning. There was a larger number of absentee ballots this year due to COVID.

But as it stands Wednesday, the tally shows a split between Netanyahu’s allies and his opponents in Israel’s parliament, the 120-seat Knesset. Two parties remain uncommitted to either group. Altogether, 13 parties are projected to make it into Knesset. Each party’s share of the parliament could change slightly after absentee ballots are counted.

Blue and White, the party that nearly beat Netanyahu last year before joining him in an ill-fated unity government, is set to drop from 12 seats to eight.

The Joint List, an Arab-Israeli party made up of multiple factions, is also expected to fall from 15 seats to six, because one party broke away this year. Raam, the breakaway, is an Islamist party that had discussed allying with either Netanyahu or his opponents. It is projected to win as many as five seats after exit polls had predicted that it would fall short.

Israel’s two Jewish left-wing parties both grew. Labor, the shrunken party of Israel’s founders, was projected to win seven seats, a large jump from its current two. The left-wing Meretz was also projected to grow slightly from four seats to five.

On the far right, Religious Zionism, a party that includes anti-LGBT politicians and extremist settlers, was set to win six seats. Shas, the Sephardi haredi Orthodox party, was projected to win nine seats, while the Ashkenazi haredi party, United Torah Judaism, was set to win seven.

Two men who had hoped to become prime minister saw disappointing results: Gideon Saar, a former member of Likud who broke away to challenge Netanyahu, is set to win only six seats.  And Naftali Bennett, a former Netanyahu deputy, is projected to win seven seats. Bennett is largely ideologically aligned with Netanyahu but has had a series of disputes with him and has not committed to joining a government under his leadership.

Following the publication of the final results, Israel’s president, Reuven Rivlin, will ask each party to recommend either Netanyahu or one of his opponents to form the next Israeli government. Whoever gets the most recommendations then gets several weeks to assemble a majority coalition. If they cannot, another party leader generally gets to try.

So the shape of the next Israeli government, and the identity of the person who leads it, may be unclear for quite some time.