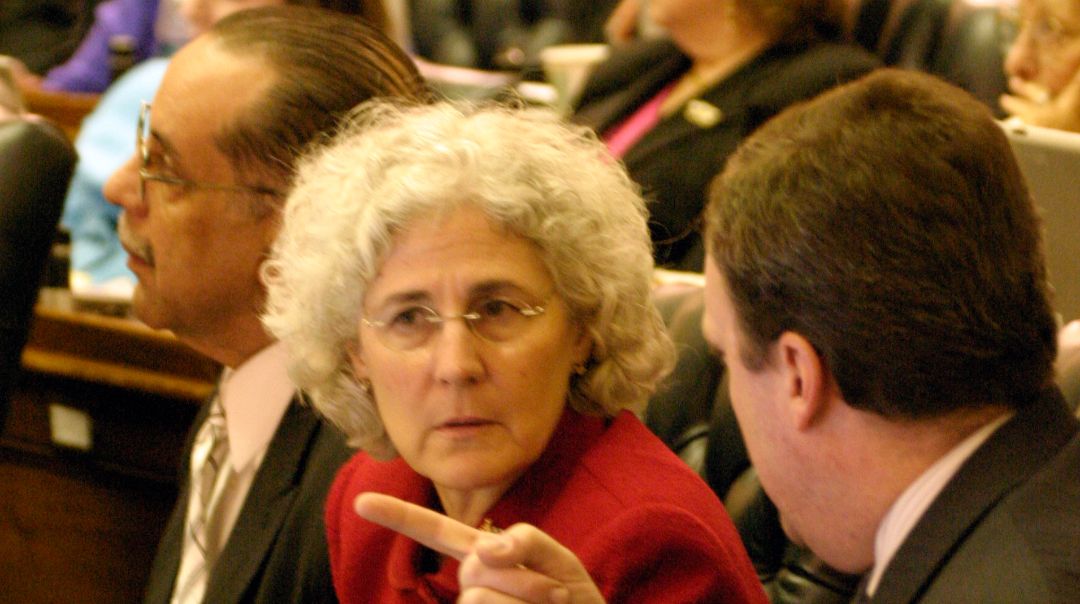 (JTA) — It only took 54 seconds for Shane Pendergrass to stand up and call out another member in the Maryland General Assembly for diminishing the meaning of the Holocaust.

She wishes she had acted faster.

“The question was how did I make myself sit in my seat for the extra 15 seconds before I stood up,” she told the Jewish Telegraphic Agency.

On Thursday, fellow delegate Daniel Cox rose to oppose a bill that would lower the age at which children can seek mental health treatment without their parents’ consent. He compared the bill to the Nazi behavior revealed during the Nuremberg trials of 1946. Cox, a Republican, said he would mark Yom Hashoah, Israel’s Holocaust Remembrance Day, by voting against the bill, which he said “interferes with the sacred right of parents and their children.”

Pendergrass, a Democrat, rose and said she wanted to speak on a “point of personal privilege,” a right granted by the House rules. Cox objected but the speaker allowed it.

“I am enormously affronted as a Jew when you in any way compare this bill to the Holocaust, especially today,” she said. “Shame on you.”

Talking about her response later with JTA, Pendergrass said, “I am the absolute least likely person to be doing this,” noting that she was raised Jewish but no longer has any connection to religious ritual. “I have very little connection to the practice of the religion.”

But as she listened to Cox, she recalled how her late father had been a prisoner of war held by the Germans during World War II. How he understood Yiddish but couldn’t let the Nazis know that he understood what they were saying. And how he had thrown away his dog tags before he was captured so he would not be identified as a Jew.

“His family thought he was dead,” said Pendergrass. (The Library of Congress recorded Marvin Reitman’s story.)

She was offended not only because she is Jewish but also because her professional experience as an art therapist included caring for children with mental health issues.

“I’m very sensitive to mental health issues,” said Pendergrass, whose focus as a legislator has been health care.

The bill Cox objects to would allow minors as young as 12 to seek care for certain health services without parental permission. It is likely to pass in the Democratic-led legislature.

During his assembly remarks, Cox said the COVID mask he wore had a picture from the Nuremberg trials printed on it, and compared the bill to the Nazis’ infringement on “the rights of parents.” During the war crimes trials that began in 1945 in Nuremberg, an international tribunal charged Nazi medical doctors for their involvement in human experimentation and mass murder.

“One of the things that was interesting and very sad in the Nuremberg trials, was the fact that medical professionals interfered with parental rights. And what was the result of those trials? Well, the European Union passed the European Commission on Human Rights guaranteeing that never again will the state and the healthcare community interfere with the rights of parents, and the rights of family,” he said. “That’s what this bill does.”

Cox was likely referring to the European Convention on Human Rights, adopted in 1953 by the then Council of Europe.

Cox later in the session said he wanted to “apologize for any improper comparison, that wasn’t my intent at all.”

Cox said he was seeking to protect “sacred parental rights” and noted that he had visited Auschwitz and that he had Jewish ancestry.

Pendergrass, who represents the town of Columbia and first elected in 1994, said she has a reputation in the chamber for outspokenness. She was furious whenever invited clergy would invoke the name of Jesus in blessing the proceedings — she would bang the lid of her desk shut in protest.

As a result of the protests from Pendergrass and others, the General Assembly in the early 2000s ended the practice of inviting clergy to open sessions — making it unique among U.S. legislatures. Instead, lawmakers open sessions with prayers but are forbidden to invoke a specific religion.

“I have a long history of when people do things that are unacceptable of standing up and letting them know,” she said.

Pendergrass was not exactly surprised that Cox outraged her: He’s on the far right of the Republican Party and organized two buses to attend the Jan. 6 protests at the U.S. Capitol that aimed to overturn the election of Joe Biden. He shocked fellow delegates when on Twitter he called Vice President Mike Pence, who affirmed that Donald Trump had lost, a “traitor.”

If she was surprised, Pendergrass said as Cox spoke, it was that he was acknowledging the reality of the Holocaust.

“The first thing I thought as he talked about the Holocaust, and knowing who he is, I looked at him and was quite startled that he was not a Holocaust denier,” she said. “So, I was paying attention to what he said.”