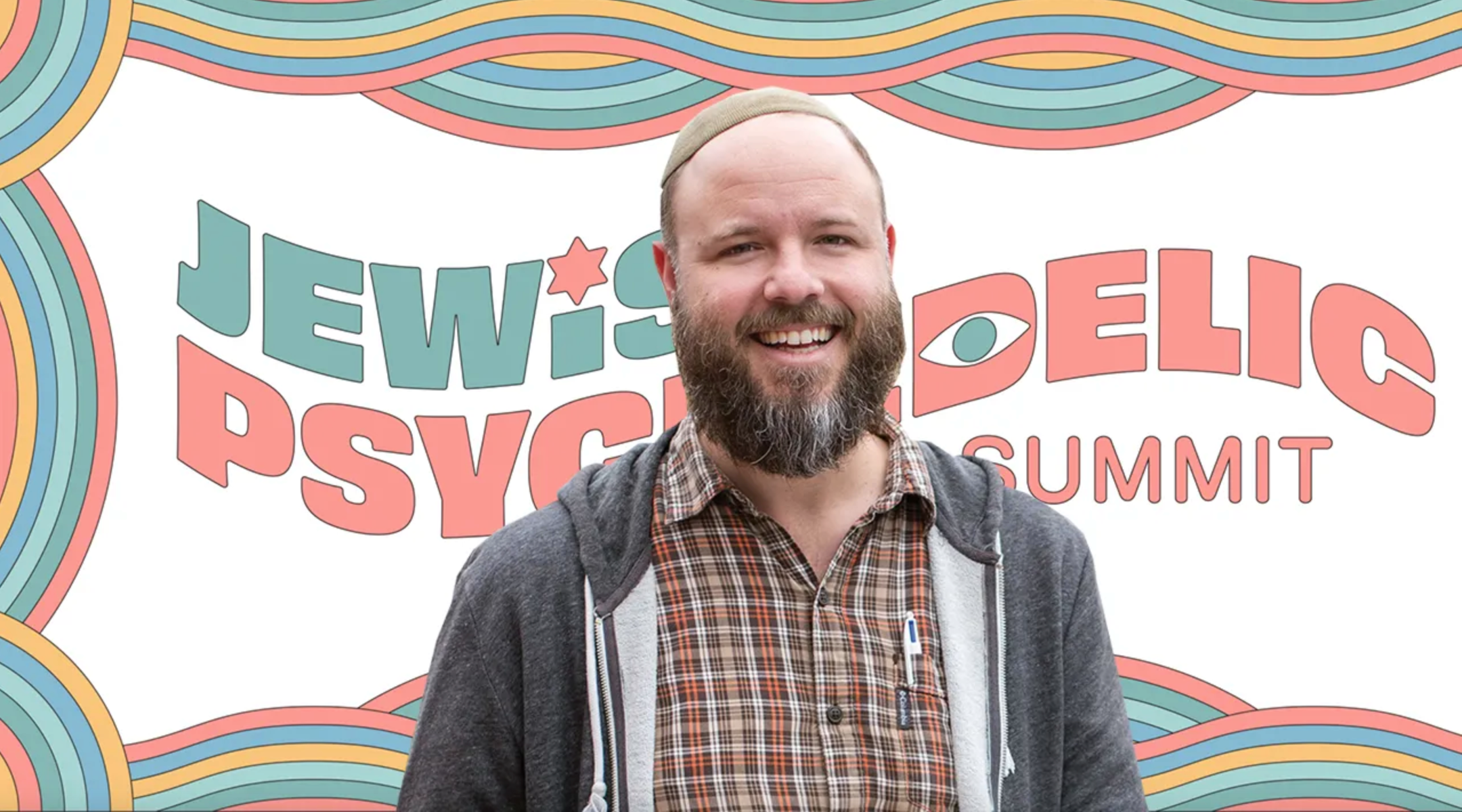 Rabbi Zac Kamenetz is one of the organizers of the landmark Jewish Psychedelic Summit. (J. the Jewish News of Northern California; background courtesy of Shefa/Shannon Levin)
Advertisement

(J. the Jewish News of Northern California via JTA) — Early in the COVID-19 pandemic, while some people were dabbling with new hobbies, Rabbi Zac Kamenetz was going all in on a lifelong fantasy.

Kamenetz has a vision. He dreams of a world in which the trauma of the Jewish past can be healed through psychedelic experiences, a world in which chemically assisted mystical encounters are a normative part of Jewish spirituality.

“Someday I see a space, maybe in the East Bay, where people can have safe and supported psychedelic experiences individually, and then integrate those experiences in a community that is invested in the application of mystical experiences with other people,” he told J. the Jewish News of Northern California, in 2019. “This is total science fiction because it doesn’t exist.”

It does now. After losing his job as the director of Jewish learning and living at the Jewish Community Center of San Francisco during a round of pandemic layoffs, Kamenetz decided to go for it. He founded Shefa, which means “flow” in Hebrew; the organization’s tagline is “Connect With Divine Flow.”

In less than a year, Kamenetz has secured funding from Jewish donors, as well as Dr. Bronner’s Family Foundation (as in Dr. Bronner’s Magic Soaps, the earthy brand with fine print all over the bottle) and the Riverstyx Foundation, which funds a number of “psycho-spiritual” projects.

He also has begun to hold regular “integration circles,” support group-like gatherings in which fellow travelers discuss and come to terms with their psychedelic experiences.

Later this spring Kamenetz is staging a two-day event that promises to put Shefa on the map — the first-ever Jewish Psychedelic Summit. It’s a collaboration among Kamenetz; Madison Margolin, editor of the psychedelics magazine DoubleBlind; and Natalie Lyla Ginsberg, director of policy and advocacy at the Multidisciplinary Association for Psychedelic Studies.

Ginsberg’s group, MAPS, has deep Jewish roots. Its founder, Rick Doblin, was inspired by a dream about surviving the Nazis to devote his life to promoting psychedelics as a cure for human ills and an insurance policy against another Holocaust. The organization has supported research and policy to advance psychedelics as a therapeutic tool.

Shefa’s summit will zoom in on uniquely Jewish questions related to psychedelics. To be held virtually with four sessions each on May 2-3, the summit will bring together dozens of rabbis, scholars, artists and more for panels with topics such as “Did Psychedelics Play a Role in Ancient Jewish Practice?” “What Draws so Many Jews to India?” and “Jewish Trauma and Psychedelic Therapy: What Is Culturally Informed Care?”

Psychedelic substances — whether organic, such as psilocybin (magic mushrooms) or synthetic (such as LSD) — are illegal virtually everywhere in the country, although some have been decriminalized to varying degrees in Oakland and Santa Cruz, California; Denver, Colorado; Ann Arbor, Michigan; and the state of Oregon. But that hasn’t stopped researchers and other practitioners — some funded by MAPS — from beginning to delve into the medical applications of these substances, such as treating PTSD, anxiety, depression and other conditions.

Kamenetz has had two experiences with psilocybin, and both were done legally as part of a Johns Hopkins University study of psychedelic experiences in clergy of various religions.

Those experiences were among the most powerful of his life, he said, and convinced him of the need for psychedelic-assisted healing in the Jewish community.

“I’m one of the very few people who can say they’ve had a legal experience with psychedelics in this country,” Kamenetz said. “To be able to speak freely about it without the stigma — because it’s not just people talking about doing illegal things — it’s allowed people to start having a more open conversation about it. When there’s the opportunity to hear from someone who did this in a legal environment, people will listen more.”

And for Jews who have already been working with or using psychedelics, Kamenetz is proud to be creating a platform where they can talk about it more openly.

“I think we’ve gotten ahead of the market,” he said. “If it wasn’t me, it would’ve been someone else.”

Ben, a 34-year-old graduate student who didn’t want to use his full name, is one of the many Jews who have used psychedelic substances. He’s attended two Shefa integration circles, 90-minute affairs that can include some Jewish chanting, brief text study and discussion of personal psychedelic experiences.

He appreciates the open, nonhierarchical vibe.

“I have a significant and long-standing psychedelic background. I have had a lot of conversations about it with similarly inclined Jews.”

Ben first heard about Shefa when Kamenetz was interviewed on the Judaism Unbound podcast.

“I knew right away this is a conversation I want to be part of,” he said. “And I sort of got the same sense from a lot of other people, a shared sense that it was important to talk about and do and explore this, to create spaces where we can talk about it.”

When the Jewish Psychedelic Summit was announced, Ben didn’t even bother looking at the list of speakers.

“I just saw the name [of the conference] and said sign me up,” he said, though he admits he’s excited about hearing from Rodger Kamenetz, the poet and author of “The Jew in The Lotus.”

Rabbi Kamenetz (no relation) is excited, too.

“We’ve got this big Jewish family of psychedelic enthusiasts who are coming and contributing to making this thing happen,” he said. “That’s why it feels so significant to me. I’ve never been part of something that really felt like a movement.”