(New York Jewish Week via JTA) — In the 30 years since the collapse of the Soviet Union and the resurgence of Islamic fundamentalism inspired Central Asian Jews to move to Queens, the Bukharian community of Forest Hills and Rego Park has never been represented in local government by one of its own.

City Council candidate David Aronov is looking to change that. But as a Democrat seeking to represent a community that has largely voted Republican — at least in national elections — he says he’s gotten pushback from some community members.

“The community is very conservative,” the 24-year-old said in an interview on Queens Boulevard and 63rd Drive, where kosher Middle Eastern restaurants, Chinese restaurants and chain coffee shops operate side by side.

But Aronov also says he has plenty of support from his community, which he describes as “very tribal” and “very tight knit.” While he may support liberal policies like universal child care and no new jails, he thinks conservative voters will put that aside in order to finally have someone in government who literally speaks their language.

Besides, Aronov points out, “even if I don’t win, there will still be a Democrat in the seat.” In many districts in New York City, the winner is effectively determined in the Democratic primary.

In 2016, using Board of Elections data, DNAinfo found that while most voters in Forest Hills voted for the Democrat Hillary Clinton in the presidential election, more than half of voters in Bukharian neighborhoods voted Republican for Donald Trump.

“I know a number of my relatives who voted for Trump who live in the Forest Hills-Rego Park area,” said Forest Hills resident Lilianna Zulunova, a consultant to the Aronov campaign who ran for the New York State Assembly in 2010. “On a national level, they’re very conservative because of the pro-Israel type of mentality that they have. But on a local level, they still vote for the Democratic candidates.”

Joshua Nektalov, 19, an accounting major at Queens College who also lives in Forest Hills, says that even though he’s a registered Republican, he’s glad Aronov is running and agrees with some of his ideas.

“It’s pretty cool that a Bukharian is running,” he said. “Even though he’s a Democrat, a lot of people will want to talk to him knowing that they have some common beliefs and share the same heritage.”

Nektalov says the issue he cares about most is strengthening the community, and he likes that Aronov supports building and improving community spaces other than synagogues, like the Bukharian Teen Lounge, an afterschool program that shut down in 2016. It’s an issue the candidate mentioned on a podcast with Queens College’s Bukharian Cultural Club, of which Nektalov is a part.

“He wants people within his community to converse and talk about issues, about themselves, besides from just being in a temple,” Nektalov said. The synagogue is an integral place to socialize for members of the largely Orthodox community.

Zulunova was a child when her family immigrated to the United States from Uzbekistan in 1992. She says that 10 or 15 years ago, her parents didn’t vote at all.

“They were more focused on getting food on the table, putting a roof over our head,” she said. “They weren’t necessarily thinking about wanting to go out and vote.”

Aronov says that political indifference is common in the Bukharian community. He told the Bukharian Cultural Club that even his own parents, who immigrated from Tashkent, Uzbekistan, aren’t really involved in politics.

Aronov says that some Bukharians don’t bother going to the polls because they think the vote is pre-decided — a carryover from their experience in the former Soviet Union.

“I hear that on the campaign trail,” he said. “Some people think oh, my vote doesn’t matter, the election’s already fixed, whoever the institution wants to win is going to win. And I’m like, that’s not true. That’s not how this works. People win by a handful of votes in these local elections.”

Queens College Jewish studies professor Manashe Khaimov, who specializes in Bukharian history and culture, says there are three reasons why Bukharians are hesitant to get involved in American politics: differences in language and culture, government corruption under the Soviets, and a bad experience with political parties in the FSU.

“There was a huge mistrust in the electoral system,” Khaimov said. “And not because the American system did it to them — it’s not because of that. It’s because of the perception that came from the Soviet Union.”

Khaimov says that under the Soviets, Bukharian Jews — the name derives from the emirate that controlled the Central Asian region until the 1920s — mostly practiced religion in private. While many wanted to get out, leaving was illegal for them until the 1970s and ’80s. At that point, some moved to Israel and the United States, but most remained. Following the Soviet Union’s collapse, a civil war in Tajikistan also raised tensions in neighboring Uzbekistan. That combined with economic problems and concerns about anti-Semitism spurred the remaining Bukharians to depart. 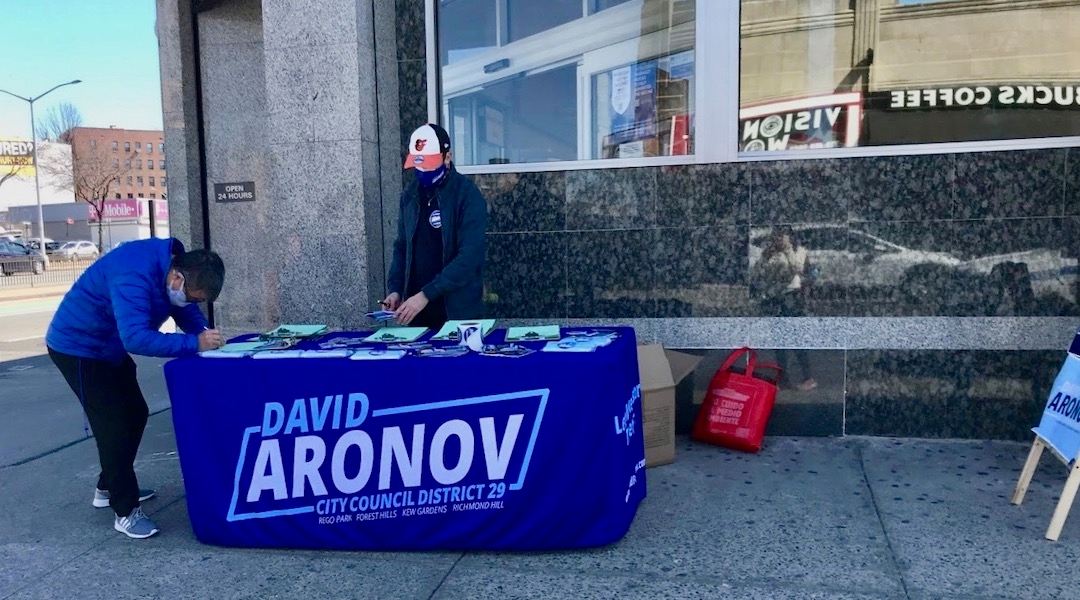 Khaimov has known Aronov since the candidate was a teenager attending Queens Gateway to Health Sciences Secondary School. At the time, Khaimov led an internship program designed to help Bukharian high schoolers decide what careers they wanted to pursue. He says Aronov wanted to pursue medicine, but the only available internship was in government. Aronov initially was uninterested in pursuing an internship in local City Councilmember Karen Koslowitz’s office.

Aronov was only a high school sophomore at the time, and juniors and seniors were given priority for internship selections, so he ended up with the government internship — and never looked back.

Working in the councilmember’s office, Aronov found that his background helped him reach more constituents.

“I was the only staffer in all of Queens that spoke Russian for an elected official’s office,” he said. “And I would have people from other elected offices calling me, staffers saying, ‘hey, somebody who speaks Russian called their office, can you help translate?’”

Now Aronov calls “language justice” for the people in his district who speak Russian, Bukharian, Chinese and other languages an important part of his campaign.

He thinks that when people have election materials available in their own language, it will be easier for them to be civically engaged.

“A lot of people don’t know what I’m running for. They think I’m running for, like, Congress,” Aronov said about the community. “They have no idea what the City Council is because there’s never been that education on a deeper level.”

Since Koslowitz is term-limited and can’t seek reelection, the City Council race in District 29 is somewhat of a free-for-all, with 13 candidates running, according to the NYC Campaign Finance Board. Aronov’s competitors include nonprofit leader Aleda Gagarin, City Council staffer Lynn Schulman and Avi Cyperstein, an EMT and co-founder of a nonprofit, Chaverim of Queens, that assists stranded motorists and responds to nonmedical emergencies.

The primaries are on June 22, and the general election is on Nov. 2.

Eytan Israelov, 23, whose family runs a Forest Hills restaurant, says he’s always cared about local politics. Israelov, who identifies as independent, says he’s concerned about rising crime in the community, and while he supports COVID-19 safety measures, he feels they’ve been applied unfairly to businesses.

Israelov, who lives on Long Island, says Aronov made an impression on him when the two attended college together at Hunter in Manhattan.

“Knowing him in high school and college … that’s what I saw. Whenever there was opportunities to do anything, whether it was at the Hillel or different organizations, he was always involved. He was always the first one ready,” he said.

Israelov especially likes how, as he sees it, Aronov doesn’t just care about the Bukharian community, but also about fighting anti-Asian hate crimes and supporting Black Lives Matter.

“He really has been there for all the communities, not just ours,” he said.

Khaimov says that if Aronov wins, more Bukharians will see it as an option to go into politics.

“There are going to be many more people from the community going to try to get themselves elected in different districts,” he said. “That’s my prophecy.”