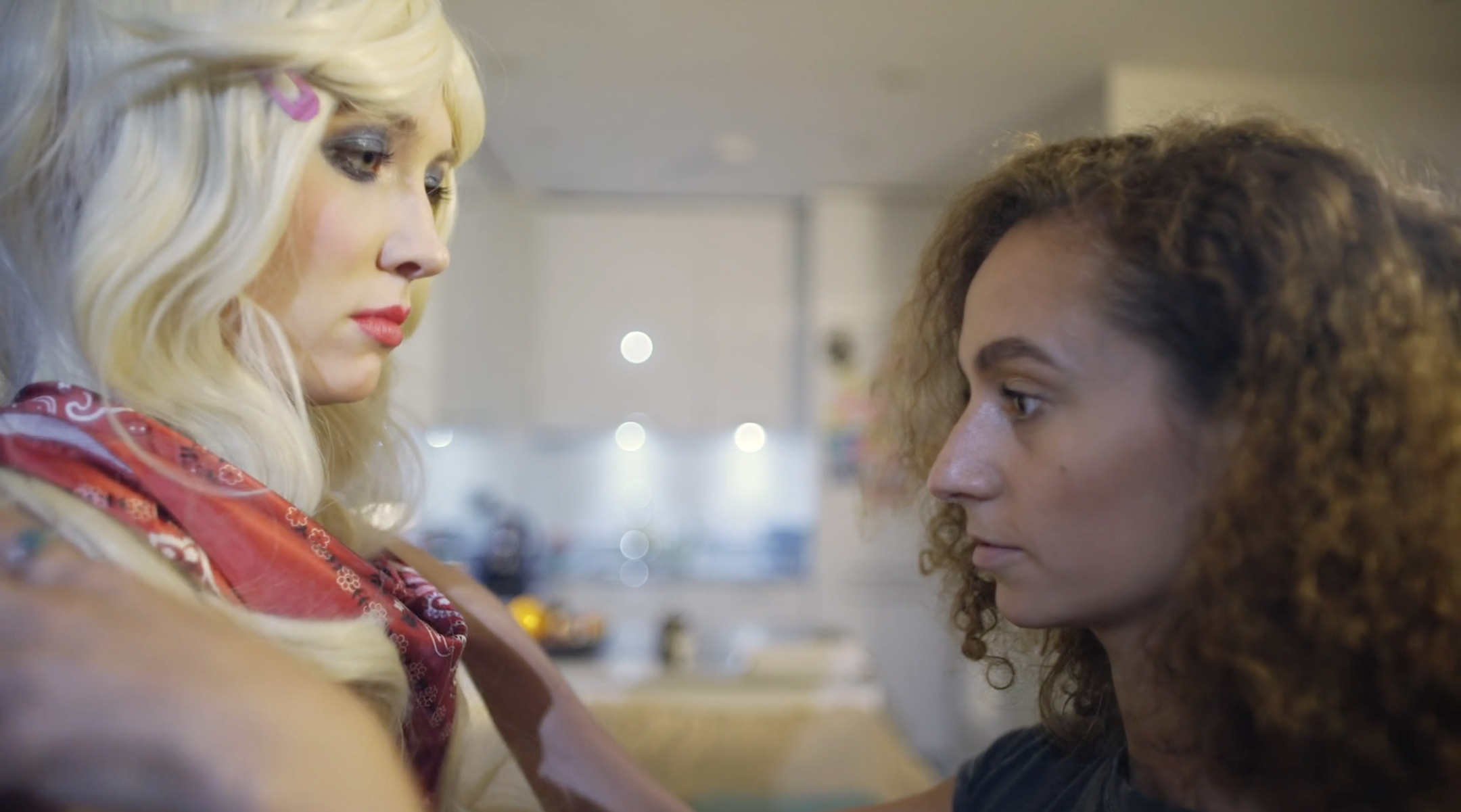 A roommate's photo shoot has a dark motive in "Miss." (Screenshot)
Advertisement

(JTA) — “Miss,” a short film that debuted on Vimeo on Yom Hashoah, Holocaust Remembrance Day, at first seems like a British version of Lena Dunham’s “Girls”: Two young female roommates, Nina and Olive, share a London flat and appear to have something of an uneasy relationship.

Nina tells Olive that she wants to compete in an online beauty pageant and would like her photographer roommate to take some pictures for it. After a photoshoot, Nina steps out and Olive peeks on her computer, only to find that Nina’s contest is the infamous “Miss Hitler” pageant — an annual neo-Nazi event full of SS regalia that has gotten some of its contestants arrested.

The title of the 12-minute film, like its plot, refers to how anti-Semitism can fester under the surface of everyday life. Yael Roth, the film’s London-based co-director, spoke with us about her journey as an up-and-coming filmmaker and how the project shines the light on a shocking form of modern-day anti-Semitism.

(The film is now free on Vimeo.)

JTA: Tell me a little about your background, and what brought you to this film.

Roth: I grew up in Belgium, [in] Antwerp, and I was there until I was 18. Then I went to Israel for a year, a gap year before university, then I went to university. I actually, by trade, I work in PR and I have been for the last 10 years, mostly within the hospitality industry. So obviously that had a massive hit because of COVID.

But film is something that I’ve always wanted to do but never did, [except for] the odd internship here, the odd work experience there, kind of dipping in and out over the years. And then, when COVID happened, I was signed up to do a filmmaking course for six months, but that got pushed back. So I thought, no one’s coming to give it to you, so just kind of go out and make a film. So this is the first short that my friend Ella [Marks], who’s my great creative partner who wrote the script and co-directed it with me, that’s how we started.

I assume being Jewish had something do with your wanting to make a film with this subject matter.

Fully, fully, 100%. I’m very kind of vocal, proud to be Jewish, and love Israel, and all of that that comes along with it. … It was back in May last year, and I was just thinking, “What film can you make, what short film that you can fully finance yourself as well?” And I thought, “What’s interesting? What do you like?” And the first thing that came up was obviously anything Jewish.

So I went on this website called The Jewish News, which is a U.K.-based publication, and the third or fourth article down was … something along the lines of “Miss Hitler Beauty Pageant Winner Arrested.” So I started reading the article, and you know when you just go down a black hole of darkness of the internet? Five hours later I was still reading about it.

I was shocked. And I know anti-Semitism is alive and very well, especially in the U.K. with COVID, and a lot of people hanging out on the internet, it’s pretty bad at the moment. But that was just another level of madness.

So I found the article and I thought, “let’s just use that as the base of a story.”

Have you ever had any interest in beauty pageants?

No, zero. It’s not a big thing in Belgium, or Europe, at least not in the environment I grew up in. [Watching] “Miss Congeniality” is the closest thing to that.

When we have the big reveal, that it’s the Miss Hitler pageant, are we meant to believe that she’s a full-on believer in Nazism? Or more that she’s an ambitious pageant competitor who maybe doesn’t have much of a moral compass when it comes to who’s putting on the pageant? Is that meant to be ambiguous, or are we supposed to reach a conclusion?

That was the idea — that you would kind of realize that she is involved with this neo-Nazi group.

I assume the title “Miss” is meant as a double meaning, in reference to how we “miss” things? I noticed the word “Miss” in the title card at the end.

Yes, I’m glad you spotted it.

Have you submitted it to the Jewish film festival circuit, or other ones as well?

It’s a bigger focus on the Jewish ones because naturally it’s more the niche, and more relevant to them, but we’ve submitted it to a couple of other festivals that we thought might like it.

Has there been any thought of making this into a feature film, or is it more at home as a short?

We’re talking about it. The whole point of this was really to raise awareness — anti-Semitism on social media is just so crazy online. And from an educational perspective, we just think it’s way more engaging and fun, and a noncombative form of communicating a different perspective.

But when it comes to making a feature, you never know.