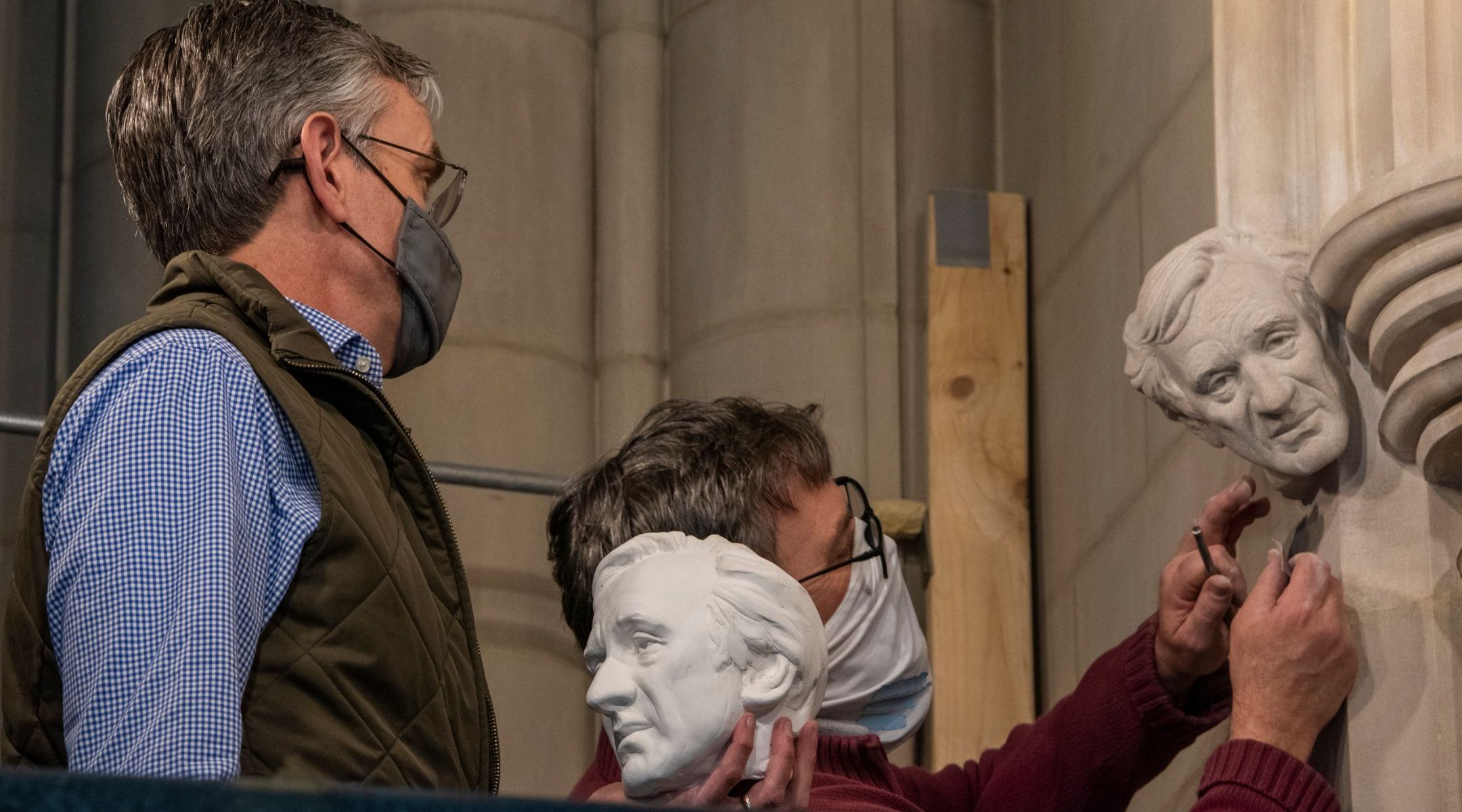 In this undated photo, sculptor Chas Fagan, left, holds a clay model of a bust of Elie Wiesel and watches as stonemason Sean Callahan, right, uses medieval techniques to carve the bust into the walls of the National Cathedral in Washington, D.C. (National Cathedral)
Advertisement

WASHINGTON (JTA) — Washington’s National Cathedral, known for its role during presidential inaugurations and other days of national import, is honoring Elie Wiesel, the Nobel Peace Laureate and Holocaust memoirist with a bust, making him the first Jew to be so honored.

Or maybe not the first, depending on where you sit.

“I would say he is the first 20th-century Jewish person,” the cathedral’s dean, Rev. Randy Hollerith, said when asked how Wiesel came to be the first Jew to earn a sculpted depiction at the cathedral.

Asked if he was referring to Jesus and some of the apostles, who also make appearances in statues and in busts in the Washington landmark, Hollerith said yes.

“I’m just being a little not quite tongue in cheek, it is accurate to say there are others,” he said in an interview on Monday.

There are also depictions of Jewish prophets, including Noah, Joab, Isaiah and Jeremiah, on the cathedral’s stained glass windows.

Wiesel’s bust joins other luminaries on the Human Rights Porch, visible as one enters the cathedral, which is also a popular tourist destination.

Among them are Mother Teresa, Rosa Parks and Oscar Romero, the El Salvador archbishop who was assassinated in 1980 while saying Mass.

The cathedral, Hollerith said, is not just a Christian shrine, but a tribute to those who loom large in the American consciousness.

“It’s important for us that whenever people come into the cathedral, that they see not only in the iconography reflected, you know, saints and other parts of the Christian faith, but they also see folks throughout the 20th century who stand as examples in our country,” he said.

There are corners of the cathedral devoted to Abraham Lincoln and George Washington. There is also a Darth Vader bust that looms gargoyle-like outside the cathedral, the result of a design competition for kids to stir up interest in the cathedral when it was expanding in the 1980s.

“Quite frankly to me to have him in this cathedral is also a reminder for everyone who walks through those doors of the reality of the Holocaust and what happened, and that it must never be forgotten,” he said. “And I think that’s doubly important to have within a Christian context.”

The cathedral belongs to the Episcopal Diocese of Washington, but it endeavors in its mission of being “a sacred space where the country gathers during moments of national significance” to be open to all faiths and Christian denominations. Rabbis and Imans routinely take part in services that take place the day after presidential inaugurations. Martin Luther King, Jr. preached at the cathedral the Sunday before his assassination.

The cathedral hosted Donald Trump’s 2017 post-inaugural service, but in 2019, after Trump called Baltimore a “disgusting, rat and rodent-infested mess” and told a group of critical left-wing congresswomen to “go back” to their countries, the cathedral had enough.

“As faith leaders who serve at Washington National Cathedral — the sacred space where America gathers at moments of national significance – we feel compelled to ask: After two years of President Trump’s words and actions, when will Americans have enough?” the cathedral’s clergy said in a statement.

This year the church maintained the post-inaugural tradition, although President Joe Biden kept himself at a virtual distance.

There are a number of other D.C.-area houses of worship that attach “national” to their name, including at least one synagogue, and a popular Jewish guessing game in Washington since Joe Lieberman was on the 2000 Democratic presidential ticket has been: If a Jewish president is elected, will the cathedral tradition continue?

The church started consulting with the Wiesel family in 2017, about a year after his death. They reviewed a number of photos and chose a likeness. Chas Fagan, a member of the U.S. Commission on Fine Arts who has crafted multiple works in the cathedral, created the clay model. Sean Callahan used medieval techniques to carve the bust from stone.

“Not only does his presence in the National Cathedral memorialize his life and honor his commitment to human rights; it also ensures that new generations will learn from his teachings and carry the lessons of his life forward into the future,” she said in the cathedral’s release.

The formal dedication of the bust will take place in the Fall of 2021.