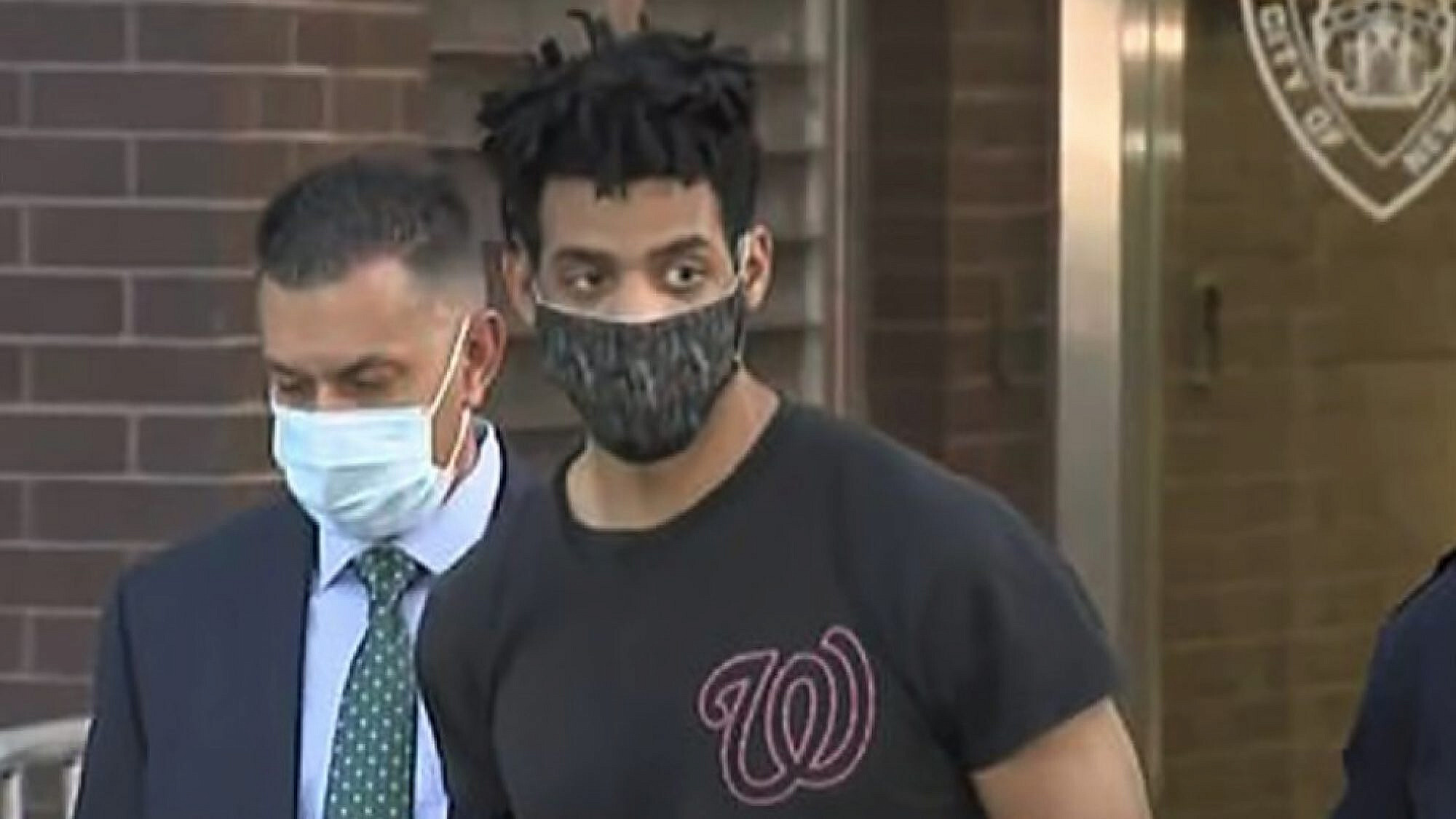 Jordan Burnette, the suspect in a series of synagogue attacks in the Riverdale section of the Bronx, is being charged with burglary as a hate crime. (Screenshot from WCBS-2)
Advertisement

(JTA) — When a suspect in a series of synagogue attacks in the Riverdale section of the Bronx was released by a judge without bail Sunday evening, it was a tough pill for some in the Jewish community to swallow.

It also revived a debate among Jews over New York state’s elimination of cash bail in most arrests — a measure hailed by progressive groups and challenged by law enforcement, Republicans and some prominent Jewish politicians.

Jordan Burnette, 29, was arrested early Saturday morning and charged with the rock-throwing attacks that shattered windows and glass doors at four synagogues in the heavily Jewish neighborhood starting the weekend of April 24. He is facing 42 hate crime and other charges.

At first, a judge set bail for Burnette at $20,000. Hours later, another judge, Tara Collins of the Bronx Criminal Court, overturned that decision and allowed Burnette a supervised release, saying a suspect with his charges cannot be held on bail under the current law.

Evan Bernstein, CEO and national director of Community Security Service, an organization that trains volunteer security squads for synagogues, said Burnette’s release is a source of pain for Riverdale’s Jews.

In the days after Burnette’s release, several national organizations objected to the judge’s decision and called for the bail reform bill to be amended to allow judges to set bail for perpetrators of hate crimes.

Agudath Israel, a haredi Orthodox advocacy organization, reiterated its support for an amendment to that effect. That amendment was  proposed in January by Simcha Eichenstein, a state assemblyman who represents Brooklyn, but it failed to pass.

“In the face of rising antisemitic hate crimes, and as this egregious case makes all too clear, Judges should be allowed to set bail for hate crimes,” Agudah said in a statement. “Those who target religious individuals and houses of worship should not walk freely while awaiting trial.”

Rabbi Abraham Cooper of the Simon Wiesenthal Center in California weighed in as well.

“Change the no bail laws or New York may become the next Paris!” he said in a statement. “New York must not allow hate mongers to attack Houses of Worship with impunity. Twenty years ago, we witnessed similar scenarios occur in France, where judges refused to hold those who vandalized synagogues accountable. That soon escalated to fire-bombings, violence and even murder.”

The bail reform law was modified in April 2020 to expand the types of serious crimes, including sex trafficking and grand larceny, under which judges could still set bail, as well for certain persistent offenders.

But local progressive leaders said the bail reform issue was not relevant to Burnette’s case.

“In this specific case in Riverdale, the defendant — also a member of this community — is currently subject to supervised release, a court-ordered program to ensure the return to court to face charges,” said Madeline Ritter, a leader of the Riverdale chapter of Bend the Arc, a progressive Jewish organization. “The supervised release program also offers community-based support and resources.

“We are dismayed that some elected officials are responding to the vandalism of synagogues in Riverdale by calling for rollbacks to New York’s bail reform law.”

Under supervised release, suspects must regularly meet with and maintain regular phone contact with a social worker while they await trial. Social workers also refer the suspect to community programs and provide regular progress reports to the court. If suspects do not comply with the reporting requirements or are rearrested, the judge can revoke the supervised release and return them to jail.

Rabbi Linda Shriner-Cahn of Congregation Tehillah in Riverdale said the bail reform issue is “not germane to this case.”

“People are looking for a way to have agency, and there are times in life where you don’t have that much agency,” Shriner-Cahn said. “The police caught him, he’s going through the legal system and our job is to be as calm as possible.”

The Jewish Community Relations Council of New York will be meeting in the next several weeks to determine if the group will advocate for a change to allow bail to be set in cases of hate crimes. Michael Miller, its executive vice president, said the group would “put this through a process,” but “there are strongly held opinions on each side.”

“It’s also possible that we won’t be able to achieve consensus,” he said.

The debate over bail reform first erupted in late 2019 and early 2020 when a series of antisemitic attacks on Orthodox Jews in New York City coincided with the passage of a bail reform package by the New York State Legislature.

Most people arrested for a crime are not held in jail while they await trial. But those who could not afford bail could sit in jail for months or years until a trial took place. Advocates for the elimination of cash bail pointed to the case of Kalief Browder, a teenager who killed himself after being jailed at the city’s notorious Rikers Island for years while awaiting trial.

But in the wake of the series of antisemitic attacks in New York City in late 2019 and early 2020, some Jewish leaders criticized the bail reform laws, claiming they were leading to an increase in crime. And after a woman named Tiffany Harris was arrested for assaulting a woman just days after her arrest for slapping three Orthodox Jewish women and subsequent release, the critics of bail reform grew louder.

As objections to the reforms increased, more than 100 mostly progressive New York Jewish organizations, leaders and rabbis signed a letter to Gov. Andrew Cuomo supporting the bail reform law. Undoing the law, they wrote, “will perpetuate the racial and economic inequality that bail reform counteracted.”