Day 11 of the fighting: Despite calls for de-escalation, Hamas and Israel trade blows amid ceasefire talks 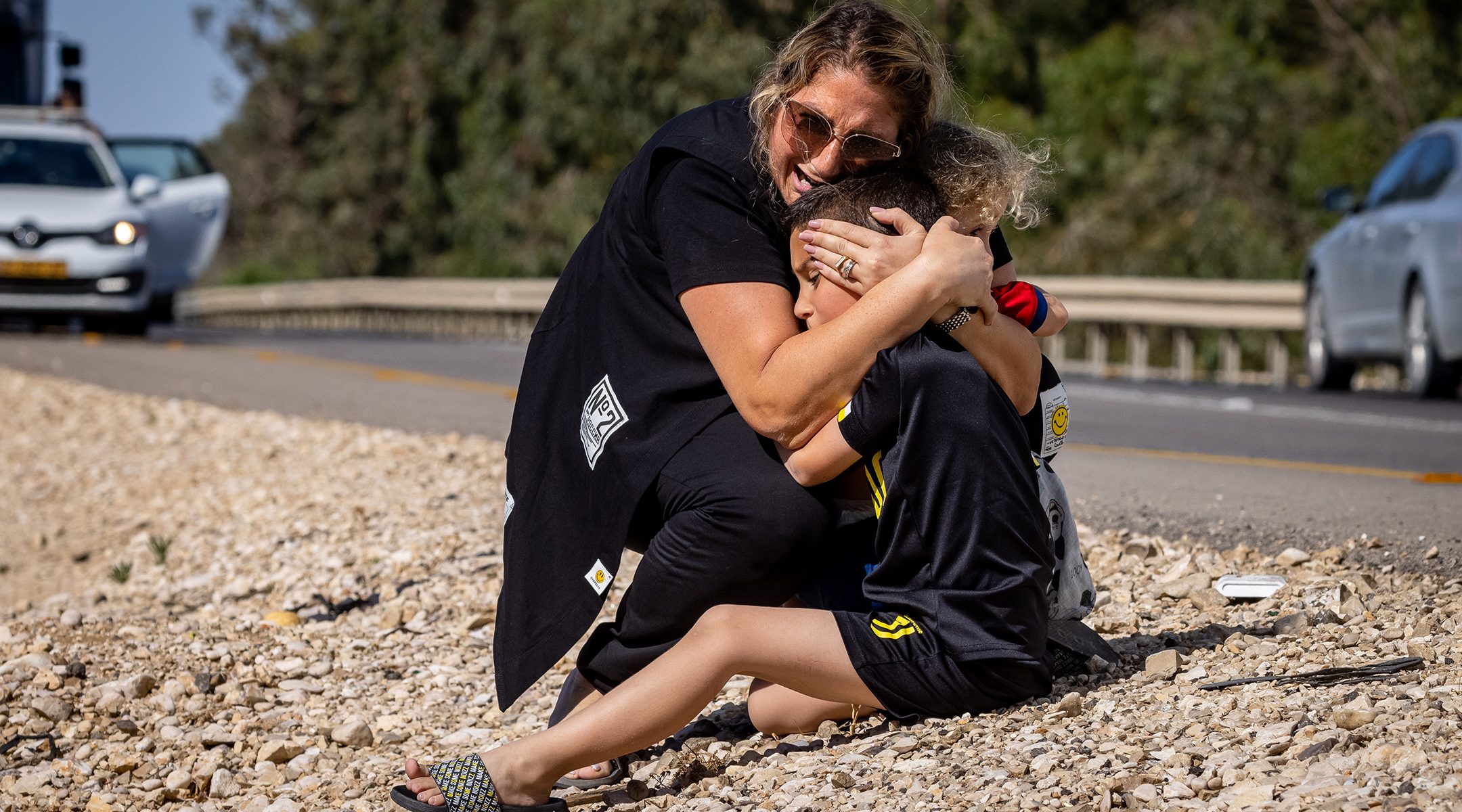 A woman and child take cover as a siren sounds a warning of incoming rockets fired from the Gaza strip on a road between Ashkelon and Sderot, southern Israel, on May 19, 2021.(Olivier Fitoussi/Flash90)
Advertisement

(JTA) — The significant de-escalation that President Joe Biden had sought Wednesday from Israeli Prime Minister Benjamin Netanyahu has not materialized, although Hamas and Israel may be preparing for a ceasefire in the near future, according to media reports.

But on Thursday, Hamas increased the rate of its attacks, prompting massive retaliatory bombings by Israel. The hostilities have also spread to northern Israel, where several rockets landed from Lebanon.

Here’s the rest of the latest on Wednesday and Thursday:

— Hamas and other Gaza militants fired about 70 rockets into Israel in the morning and afternoon and Israel Defense Forces troops continued to strike in Gaza, driving the death toll there up to about 230 people since Israel and the militants began exchanging fire on May 9. In Israel, 12 people have died as a result of the rockets. Wednesday’s strikes focused on the homes of Hamas and Islamic Jihad officials, according to Israel’s Army Radio.

— Gaza militants also fired an anti-tank missile at an empty bus used to transport Israeli troops. The militants targeted the bus from across the border, hitting its rear and wounding only one soldier.

— At least four rockets were launched at the Haifa region and the town of Shfaram. They hit no structures and the explosions resulted in no damage. Israeli troops shelled southern Lebanon in response, inflicting no damage, Makor Rishon reported. UN observers found four launchers and a fifth rocket, which misfired, at the scene of the launch. Hezbollah, a terror group with Iranian funding that largely controls southern Lebanon, rarely leaves military equipment behind. The launches may have been by smaller Palestinian groups seeking to support Hamas. Hezbollah likely sanctioned the shooting, Israeli military sources told Makor Rishon.

— Diplomatic efforts to de-escalate the hostilities are underway and being led by the United States; Germany, Egypt and Qatar, Israeli media reported. Israeli Defense Minister Benny Gantz instructed the IDF to prepare to wind down their operations in Gaza, according to Makor Rishon. Hamas is also preparing to end the fighting, though both sides may be planning to intensify their fire just ahead of the ceasefire to maximize damage to the other side and create the semblance of victory for internal propaganda needs. A poll on Israeli Channel 12 found that 72% of Israelis oppose a ceasefire and want the military operation to continue.

— Jewish communities in the Diaspora and other supporters of Israel are preparing large rallies expressing support for the Jewish state. In London, an event that is expected to draw thousands is planned for Sunday at a location that will be communicated only shortly beforehand for security reasons, one of the organizers said. In The Hague, the Netherlands, another large event is scheduled to take place Thursday. Cities across the United States and Europe have also seen large pro-Palestinian demonstrations.

— Antisemitic incidents have increased sharply across Europe, with chants about massacring Jews being reported in recent days at pro-Palestinians rallies in Brussels, Berlin, Vienna, Paris, Amsterdam and London. In the United Kingdom, 116 such incidents have been reported since May 9 compared to only 11 cases in the previous two weeks. In the United States, the Anti-Defamation League has tallied antisemitic signs and symbols at pro-Palestinian rallies across the country, as well as a few instances of vandalism and physical attacks.

— The fighting between Hamas and Israel, which has divided celebrities for days, is making its presence known in the world of soccer, the world’s most popular sports. Eran Zehavi, an Israeli player for the Dutch PSV team, on Wednesday waded into the arena on social media. He posted on Instagram a photo of two Manchester United soccer players, Paul Pogba and Amad Diallo, holding a Palestinian flag on the pitch during a match Tuesday. The players decided to fly the Palestinian flag in violation of the FIFA world soccer federation rules, which prohibit displaying political symbols on the pitch.

The image that Zehavi posted, however, was intentionally doctored to have the two UK players hold up an Israeli flag. “Thanks for your support,” Zehavi wrote. It triggered a slew of thousands of derogatory comments and the posting of pictures of Zehavi’s wife and children with Palestinian flags.