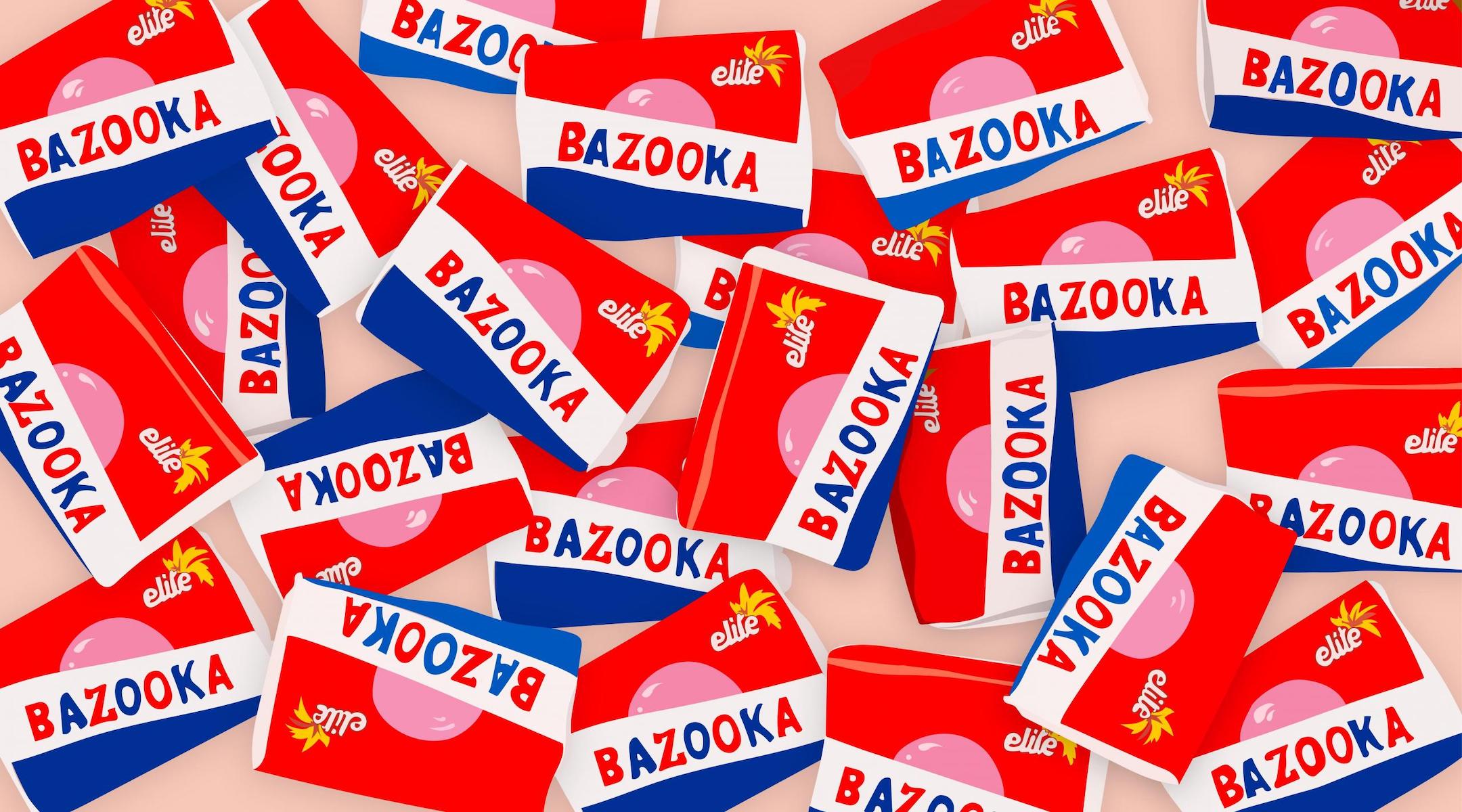 Chew on this: One of America’s most iconic gum brands was originally a Jewish-owned tobacco business.

In 1891, Morris Chigorinsky emigrated from Russia to the United States, where in the early 1900s he assumed control of the American Leaf Tobacco Company. But by 1938 — by then Chigorinsky had changed his surname to Shorin — the business was flailing. His four sons decided to save the family from certain penury by starting a new penny candy business, Topps Chewing Gum Inc., with the name borrowed from an eponymous Chattanooga candy company they purchased.

Following the end of World War II, the Shorin brothers — Abram, Ira, Joseph and Philip — aggressively set about supplanting their then-dominant competitor, Dubble Bubble, manufactured by Fleer, through the launch of Bazooka Bubble Gum. The gum cleverly capitalized on the nation’s postwar patriotic pride in the wake of their recent victory, not only via its name (derived from the rocket-propelled weapon invented and deployed by American troops) but also through its red, white and blue packaging.

The product sold well, but in 1953, Topps made an alteration to the design that proved to be a game changer: the inclusion of small comic strips starring Bazooka Joe, a swashbuckling kid who donned a black eyepatch and got into scrapes and adventures with his crew of streetwise companions. The wrappers — ultimately there were over 1,500 manufactured — also featured fortunes and immediately became collector’s items among consumers and candy enthusiasts, who still vigorously buy and sell vintage strips on online auction websites. While the original flavor continues to be the bestseller, Topps has also introduced variations, such as Grape Rage, Cherry Berry and Watermelon Whirl.

In 2012, Bazooka discontinued the inclusion of comics in favor of “brainteaser” wrappers and subsequently found itself in a sticky situation. Loyalists were displeased and chewed out corporate honchos for the most unwelcome change. In 2019, Topps responded to the call to adhere to the original look by issuing a Throwback Pack intended to be “inspired by the brand’s iconic original packaging” with “nostalgic 1980s graphics and Original flavor Bazooka Bubble Gum wrapped in classic comics.”

Testaments to Bazooka’s enduring popularity have bubbled up over the years in sitcoms such as “How I Met Your Mother,” “Seinfeld” and “King of Queens.” The candy made a particularly sweet cameo in an episode of “30 Rock,” in which NBC exec Jack Donaghy (Alec Baldwin) erroneously and hilariously claimed Bazooka’s founder inherited a quarry of pink rocks, then baked them to transform them into gum.

While Bazooka continues to be cherished in many countries, the gum has amassed a particularly unique cult following in Israel. In the 1960s, Islico Ltd. began making Bazooka in Tel Aviv, which was taken over by Lieber Co. in the 1970s, then assumed in the 1980s by the food conglomerate Strauss-Elite, which continues to manufacture the candy today, in addition to snack mashups like Bazooka-flavored marshmallows and even milk.

“So culturally iconic are the strips in Israel,” The Jerusalem Post reported in 2017, “that they even inspired one local artist to assume “Bazooka Joe” as his pseudonym because “he naturally connected with the colors and simplicity of the comics.'”

Chomping at the bit to get a glimpse of some of these crazy toons but still hesitant to travel because of COVID-19? Those interested in Israeli Bazooka historiography can visit a virtual museum dedicated to displaying the cartoons over the decades.