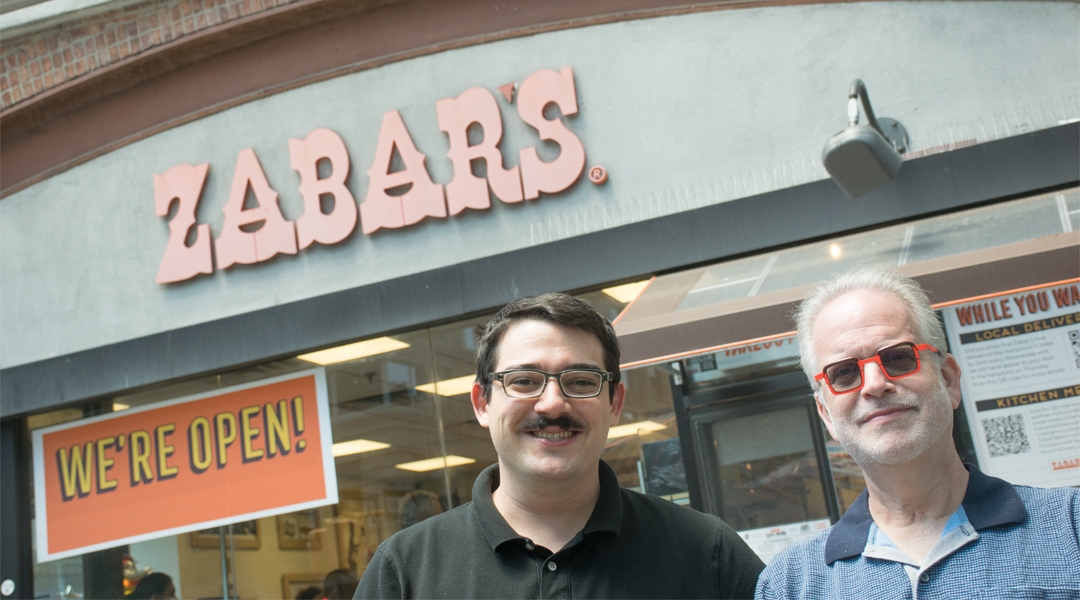 (JTA) — For many 20-somethings, the experience of moving back into their parents’ home during the pandemic was common.

For Willie Zabar, fourth-generation scion of one of New York’s most famous Jewish emporiums, the pandemic brought a different kind of homecoming: returning to the family business.

A comedian and theater worker, Zabar, 28, had mostly made his career outside the appetizing and deli business, save for his teenage job at the Upper West Side store’s deli counter. When the pandemic left him out of work, he came back to Zabar’s to work on social media.

Now Zabar is launching a podcast centered on the store and featuring its personalities, from the lox counter to the coffee aisle and everywhere in between.

We talked to Willie Zabar and Zabar’s general manager, Scott Goldshine, who has been at Zabar’s for 44 years, about the podcast and how the store — a celebrated marker of New York Jewish identity — has fared during the pandemic.

JTA: Tell me what it’s like to grow up in the Zabar family.

Zabar: My dad worked here my entire life and I would come in with him to the store from a very young age. He would be doing paperwork, and I would sit there and draw the logo over and over again. In the housewares department we used to sell these novelty magnets, and my “job” as a kid was to take them out of the box and arrange them in a pleasing way. When I turned 16, I started working on the deli counter selling knishes and strudel. And then I was doing more deli department stuff, slicing meat for holidays and summers ever since then.

What were you envisioning when you came up with the podcast idea?

Zabar: I wanted to have conversations with people who work here, people who are experts in the field. We really love the idea of getting food history experts and talking about bagels, like where they come from, how long have they been a New York staple. And also I knew that we had access to a decent amount of archival material from these audio cassettes that we have lying around the store from previous times that we’ve been featured in the media and mentioned in the news. Zabar’s has popped up in many TV shows and movies.

When you listen to the show, you hear things like the coffee beans being poured into a bag and the whir of the coffee grinder. How did you think about capturing the sensory experience of being inside Zabar’s?

Zabar: The people on the production team with me are Emily Cherish, our producer, and Henry Butler, who is one of my best friends. He is an audio genius, so a lot of the individual beans falling and the stirring of the coffee, that’s all him. So the sounds that we’re hoping to  capture, it’s kind of a mix of those special little moments that you know you might not hear all the time, getting high quality audio of the coffee grinder, of a deli slicer, combined with the very familiar sounds of walking into Zabar’s. We have some audio announcements on the P.A. system that have been up there for 20 years. And, you know, the sounds of New York outside and then the voices of people here. We’re just hoping to find ways to give texture and just show people the sounds of Zabar’s. I wish we could have the smells, but the technology’s not there yet.

I loved the tip in the show about buying coffee on Tuesdays, that was great to know. Do you have any other tips?

Goldshine: Very early, if you’re one of the first few people in, you have the run of the store. Except for Sunday morning when there’s always a line that goes around the block. Monday through Friday when we open at 8 o’clock, between 8 and 9, there’s nobody in here.

What’s the best thing to buy in the store that nobody knows about?

Goldshine: That rules out babka, rugelach, nova and coffee.

Zabar: We have umbrellas. Zabar’s umbrellas come in handy.

Goldshine: We have crumb cake that I love. I personally have to bring up the crumb cake, which we sell behind the bread department.

Goldshine: A lot of people have their own secret stuff that sometimes I don’t understand but I can’t think of.

What’s the relationship between Zabar’s and some of the other stores in the neighborhood, like the Fairway supermarket or the gourmet market Citarella.

Goldshine: Fine. We’ve all been around a long time. We all get along. I mean it’s different, we used to be good friends with the owners of Fairway before they became corporate so if I needed something, you know I could call one of the owners or if they had a question about something they can call me. So that relationship has always been fine. I do know that Joe, the owner of Citarella, has a place in Fire Island and I do believe he plays softball with Saul [Zabar]’s son Aaron. So I guess we have a good relationship; we don’t have a bad relationship. We don’t step on anybody’s toes, we all get along, nobody goes to screw the other person or anything like that.

How has the neighborhood changed in the time that Zabar’s has been there?

Goldshine: It was a very, very different place [in the 1970s]. It certainly wasn’t as safe, you couldn’t go on to Amsterdam Avenue, you couldn’t walk on 80th Street from Broadway to Amsterdam, without being offered prostitution, drugs or any or all of the above. And nobody wanted to be on Amsterdam after 7 o’clock at night. [Before that,] we used to be open till 10 o’clock on Fridays and midnight on Saturdays. And midnight on Saturdays was a real circus here because when all the Broadway shows got out at 10, 10:30, they started to come in, we would have people like Anne Jackson, Eli Wallach, Zero Mostel. The place would be packed, the fish counter would be jammed. It was great. I mean it was an amazing, amazing scene.

But over the years when New York became unsafe, people stopped going out. And so we started to lose that customer base. We started to close earlier on Saturday nights because we just weren’t getting the same amount of customers. In this neighborhood there were a lot more mom-and-pop-type stores. Nowadays there ain’t too many of them left. But it’s always been a great place to raise a family, it’s still of all the neighborhoods in the city the most residential, and it’s always been a close-knit community. We still have people at Zabar’s and they’re regular people that are coming in five times a week to get a roll or a bagel. And that hasn’t changed. People that I’ve held in my arms as infants are now coming in as adults.

How were things different at the store during the pandemic? And how have things been changing now that New York is really opening up again?

Goldshine: Well, it was rough for quite a while, like for most businesses. We were a little different in that our mail order business just kind of went through the roof, we were shipping all over the country, double than what we normally ship. But as far as the retail part of the store, we were down almost 70%, for quite a while. We closed the cafe, we cut the store hours so we were open till 5 because nobody was out in the street after that. Thankfully we didn’t really lay anybody off, we were able to keep our staff, but it was pretty tense, obviously much, much, much less business. It was rough. We had a bunch of people that got COVID, like all other places. It was quite an interesting way to have to navigate that whole year.

But business has been slowly coming back, which is great. We’re still down, but nothing like we were a year ago, so I definitely see a light at the end of the tunnel. We had a catering business that went to zero. If they weren’t doing brises, they’re doing brises now. If they weren’t sitting shiva, they’re sitting shiva now because I’m starting to see orders, and big orders. So things are starting to come back. I don’t know if they’ll ever come back to where they were. There are still customers that will not come into this store that I haven’t seen literally since the pandemic started. They’re just terrified.

Still, even with the vaccine?

Goldshine: Still. I know someone who’s actually a famous writer, but I’m not gonna disclose his name, who literally lives around the block, who I’m a friend of. He’s not set foot in the store, and he used to come in easily, three, four times a week. But we are starting to see some of those people come back that we haven’t seen, but not everybody.

When those people come back, what’s it like? What do they say or what are they buying?

Zabar: It’s like a homecoming. There’s a lot of hugs. “Hey, we didn’t hear from you, we didn’t know if you were dead or alive.” “OK, I’m OK,  you know we just didn’t come in.” And then they go back and they resume shopping like they normally did, whatever they used to buy, they continue to buy. A lot of them had delivery, some of them you know moved out of the city … I know there’s a bunch of people that have left the city and they’ve discovered they can work from wherever they are, so those people aren’t coming back.

I think we’re gonna get most of it back. I just think the whole pandemic has changed the way people behave and the way they shop. If they can get things delivered, they’d much rather get things delivered. We are a crowded store. We are not a store of wide open spaces, so people are generally on top of each other. And there are people that are just scared, they don’t want to do that anymore.

What do you think the store means to people?

Goldshine: The amount of people that came in during the pandemic and thanked us for being open was tremendous. This is a landmark. It’s next to the Museum of Natural History, probably the most important place on the Upper West Side. It’s a landmark for the city, it’s obviously a very Jewish landmark. I’ve heard 1,000 times: Don’t ever close, I don’t know what we would do during Yom Kippur or Rosh Hashanah or Passover.

This place means a lot to a lot of people. We always feel that we have a responsibility to the neighborhood to open. We don’t ever close. The only time I’ve ever had to close the store was when there was no subway service. Other than that we’re open every single day. We go out of our way for people, if we have to. To this neighborhood, I’m pretty sure it’s the most important store. Now some people say Trader Joe’s, but we don’t like those [people]. 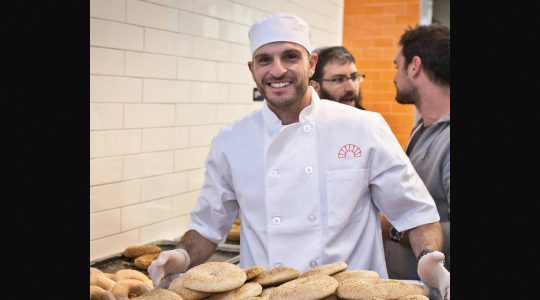