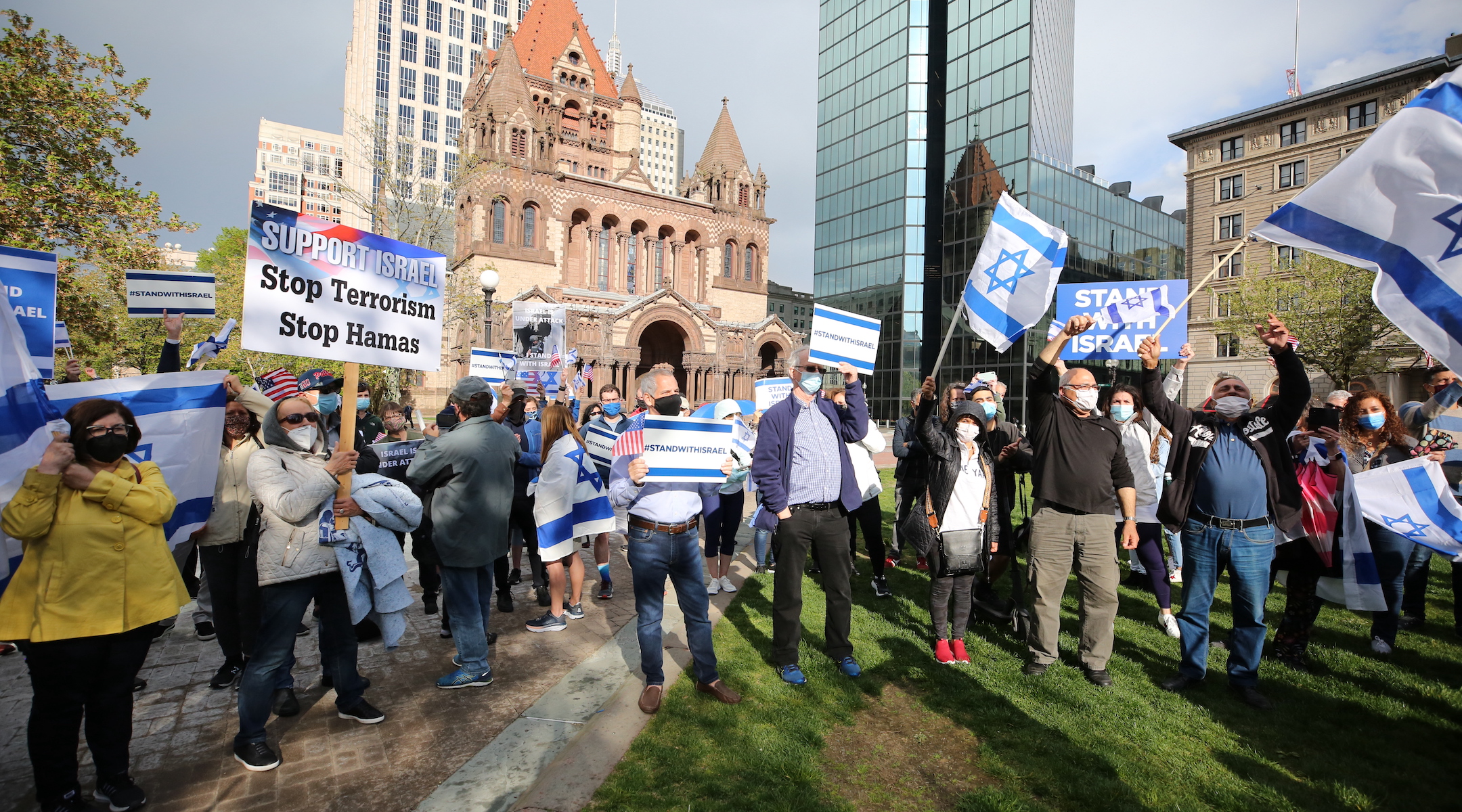 A rally in support of Israel in Boston's historic Copley Square organized by the Israeli American Council, May 12, 2021. The IAC was part of a coordinated push opposing legislation in neighboring Cambridge to end city contracts with businesses that work in Israel. (Courtesy of IAC Boston)
Advertisement

BOSTON (JTA) – For the second time in two years, the City Council of Cambridge, Massachusetts, has rejected an effort to formally discourage municipal contracts with Hewlett-Packard and other companies that do business with Israel.

After 10 hours of impassioned public comments on the measure, widely viewed by both advocates and critics as intended to advance the movement to boycott Israel, the council adopted a substitute measure that commits to reviewing all city contracts for ties to companies that “perpetuate violations of international human rights laws.” That measure recognizes destructive attacks by the Israeli government against Palestinians while also affirming Israel’s right to exist and defend itself.

The council also unanimously adopted a resolution supporting the Palestinian Children and Families Act in Congress, which seeks to prevent Israel from using U.S. taxpayer funds to support alleged infractions against Palestinians.

“I heard the conviction that we must do something for justice for Palestinians, and I heard the fear of Jews with experience of antisemitism right here in our city,” said Cambridge City Council member Patricia Nolan, who proposed the substitute measure at the council meeting Tuesday night. “We are hoping this is something that can bring us all together.”

What happened in Cambridge reflects the charged emotions and complicated dynamics surrounding how the Israeli-Palestinian conflict plays out in local environments. The suburban Boston city of 120,000, home to Harvard University and the Massachusetts Institute of Technology, is overwhelmingly politically liberal and home to many Jews, including many from Israel.

Three years ago, local critics of Israel pushed a measure that would bar Cambridge from contracting with Hewlett-Packard, whose computer technology Israel’s critics say is used by the Israeli government and military to discriminate against Palestinians. (Cambridge has not contracted with HP for years, though Nolan noted that the city holds a contract with a larger distributor that may purchase products from the company.) In 2018, the group Mass Against HP, which included Jewish Voice for Peace Boston and the antiwar group Mass Peace Action, failed to have the council place a resolution on its agenda.

This year, a similar resolution advanced further, making it to the agenda and drawing fierce advocacy — exactly at a time when tensions between Israel and Palestinians were flaring anew. The measure originally was set for discussion during a meeting on the Jewish holiday of Shavuot, but was rescheduled following objections from Jewish residents who would have been unable to participate in the debate.

That meant it came up for debate and a vote shortly after Israel and Hamas reached a cease-fire in a conflict in which 250 Palestinians and a dozen Israelis were killed.

Boston’s main Jewish communal organizations opposed the original measure, saying it was a front for the Boycott, Divestment and Sanctions movement, known as BDS. The Jewish Community Relations Council of Greater Boston, along with the New England Anti-Defamation League, the New England American Jewish Committee, the Boston branch of the Israeli American Council and the Combined Jewish Philanthropies of Greater Boston, collaborated with Jewish groups in Cambridge to encourage residents to speak out against the measure.

Through the groups’ action alerts, more than 150 people argued against the bill in testimony. An additional 250 residents signed on to a joint letter that was read to the City Council.

The groups cheered the council’s decision to adopt the substitute measure.

“BDS lost in a clear vote tonight in Cambridge,” Jeremy Burton, the JCRC executive director, wrote in an email. Rather than “demonize one company and one country,” Burton said Cambridge “adopted a human rights lens in contracting that applies neutrally to all countries and vendors.”

Meanwhile, progressive groups including IfNotNow Boston celebrated the council’s decision to support the Palestinian Children and Families Act, known as H.R. 2590. It has the backing of many progressive Democrats, including Rep. Ayanna Pressley, whose congressional district includes parts of Cambridge.

Blair Nodelman, speaking on behalf of IfNotNow Boston, a Jewish group that opposes Israel’s occupation but does not take a position on BDS, told the Jewish Telegraphic Agency that the council measure was significant.

“It’s a model of what local politics could be,” she said, noting that her group is “pressuring Massachusetts senators Elizabeth Warren and Ed Markey to join the bill.”

Debate over the measures was fierce and lasted for 10 hours over two days by Zoom. Councilor Quinton Zondervan, who initiated the original measure along with two other councilors, said there are clear “parallels between Black liberation struggles in the U.S. and Palestinian struggle in Israel,” and compared the measure to decades-old activism surrounding Cambridge-based company Polaroid’s role in South African apartheid.

“Both antisemitism and Israeli apartheid are rooted in racism, and we must fight both to secure Palestinian and Jewish safety,” Zondervan said in support of his original proposal.

Cambridge resident Amanda Jacir presented testimony about the toll of the fighting between Israel and Hamas.

“Last week I recounted to you how a friend woke up on his birthday to the news that over 20 members of his family in the Gaza Strip were massacred overnight,” she said, adding that support for the HP measure was an opportunity for the city to “distance itself from being complicit.”

Rabbi David Roth of the city’s Temple Beth Shalom spoke against the measure and said he worries about safety for himself and his family, as well as the geopolitical consequences of local measures in the United States targeting Israel.

“Singling out the Jewish state as a uniquely villainous country deserving of condemnation makes peace harder, not easier,” Roth said in his testimony.

Robert Trestan, director of the local Anti-Defamation League office, said he questioned the relevance of the Cambridge council weighing in on international policy.