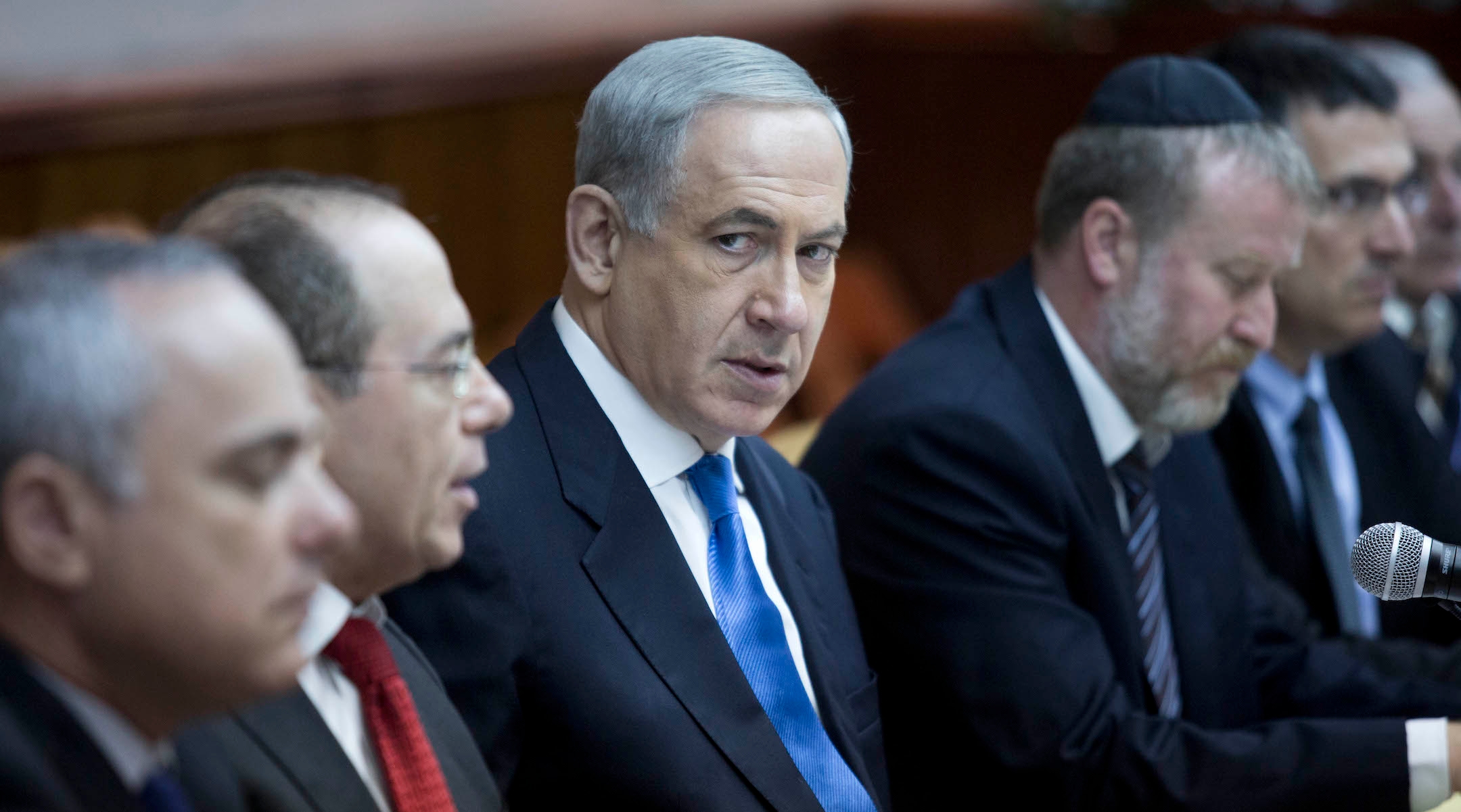 WASHINGTON (JTA) — In 2001, when he was out of office and in what he thought was a private setting, Benjamin Netanyahu boasted, “I know what America is. America is a thing you can move very easily, move it in the right direction.”

Reelected in 2009, and still serving 12 years later, Netanyahu has moved American Jews and Democrats in one direction — but not, from his perspective, the “right” direction. His approval ratings among Jews and Democrats have gone underwater. He has remained popular with Republicans.

The story of Netanyahu’s relationship with America is that he knows what one part of America is — the part that identifies as politically conservative.

“There is no more articulate or eloquent spokesperson for Israel than Netanyahu, he is a superb communicator, he knows issues back and forth,” said Morton Klein, the president of the Zionist Organization of America, who has been close to the Netanyahu family. “No one can marshal the facts for Israel’s case like Netanyahu.”

The other America, the one that votes Democratic, Netanyahu ignored or simply never got. That other America happens to include the vast majority of American Jewish voters.

That dichotomy was evident in the secretly recorded conversation between Netanyahu and a family he was consoling after a terror attack in 2001, two years after Ehud Barak had defeated Netanyahu in an election, ending his first term as prime minister. Netanyahu, a private citizen at the time, was describing his successes as prime minister in limiting Israeli concessions during the Oslo peace process.

Confronting Clinton, and “playing cute” by cultivating Republicans to gain political leverage, infuriated the president at the time. But that wasn’t enough to dent American Jews’ approval of the telegenic, fluent English-speaking prime minister, who spent a chunk of his young adulthood in the United States and whose relationship with the American Jewish community dates back to his days as a diplomat in the United States in the early 1980s. In surveys from the late 1990s, more than 60% of American Jews said they approved of how he handled the peace process.

It was only during his second stint at Israel’s helm, during which he has become the country’s longest-serving prime minister, that Netanyahu dented his reputation among American Jews — and tanked it among Democrats. Netanyahu had a string of confrontations with President Barack Obama over the Palestinians and Iran, which he followed with an embrace of President Donald Trump. Those relationships, coupled with his increasingly conservative policies in Israel, soured a relationship with American Jews that was once on solid footing.

In 2009, the year Netanyahu returned to office, only 23 percent of American Jews disapproved of him, according to the American Jewish Committee’s annual poll. That doubled to 47 percent by 2017, the last year the AJC poll included the question. His approval ratings dropped from 59 to 45 percent among American Jews in the same period.

Netanyahu’s approval rating among Democrats was never high, but it has also fallen over the past decade. In 2019, the last time Gallup polled his ratings among Americans, it was 18 percent. His approval ratings among Democrats fluctuated in the upper 20s and 30s throughout much of the decade, except during the height of his confrontation with Obama over the Iran nuclear deal in 2015, when it dropped as low as 17 percent.

Netanyahu’s confrontations over settlement issues with Obama, a Democrat popular with Jewish voters, in 2010 and 2011, also likely didn’t help.

The ZOA’s Klein said that Netanyahu slow-walked building in Jewish settlements in the West Bank, unlike some of his predecessors, but that the left was never going to accept him, because Netanyahu resisted backing the two-state solution that has become a liberal orthodoxy when it comes to Israel.

Klein said Democrats over the years have been increasingly influenced by Israel-hostile elements. “I don’t think those in Congress who are hostile to Israel are going to become less hostile if you have a left-wing prime minister,” he said. “Their hostility is based on their belief that Israel is not unilaterally giving a state to the Palestinians.”

But there were other factors afflicting Netanyahu’s relationship with American Jews, not least the concessions he made to religious parties in his coalition, as well as policies that ran counter to American Jews’ pluralist inclinations. How deeply those policies cut was revealed in a High Holiday call Netanyahu’s then-senior adviser, Ron Dermer, had with Jewish federation leaders in 2011.

Dermer came equipped with talking points about the peace process — but he was unprepared for a fusillade of furious questions about the status of women in Israel, including segregated seating on buses serving the haredi Orthodox community and the humiliation of an Israeli woman scientist who won a Health Ministry prize but was banned from receiving it on a stage by the health minister, who was haredi.

Other difficult moments in the increasingly difficult relationship between Netanyahu and U.S. Jewish leaders followed a similar theme: In 2017, Netanyahu reneged on an agreement to provide a space for non-Orthodox group prayer at the Western Wall. His threat in 2018 to expel African asylum seekers spurred condemnation from Jewish leaders not known for criticizing Israel. His warning to Likud voters on election day in 2015 that “droves” of Arabs were heading for the polls shocked American Jewish groups. His working in 2019 with a far-right party drew warnings from major Jewish groups, including the AIPAC lobby, which barely ever criticizes Israel.

For Democrats, Netanyahu became indelibly identified with Republicans in 2015 when he accepted an invitation from John Boehner, then the Republican speaker of the House, to address Congress and berate Obama for his Iran policy.

That event was organized in part by then-ambassador Dermer, an adviser so close to Netanyahu that he has been called “Bibi’s brain.” Democrats say the Miami-born Dermer, who started his political career in the 1990s working with a GOP consultant, effectively became a Republican partisan when he agreed to Boehner’s request to keep the planned speech secret until it could do maximum damage to Obama.

On the day after Obama delivered his State of the Union address, Boehner announced Netanyahu’s speech, a move calculated to make Netanyahu appear to be the more serious statesman, which outraged Democrats — especially Black Democrats. A number of Democrats boycotted the speech.

Netanyahu’s perceived partisanship only intensified after Donald Trump’s election, and their fierce mutual embrace: Trump shattered multiple taboos in U.S. Israel policy and adopted Netanyahu’s agenda, moving the U.S. embassy to Jerusalem, recognizing Israel’s claim to the Golan Heights, defunding aid to the Palestinians, quitting the Iran nuclear deal and fashioning a peace plan that would hand Israel a huge chunk of the West Bank. Netanyahu paid the favors back, calling Trump the most pro-Israel president ever and defending Trump when his statements seemed antisemitic, or at least insensitive to Jewish fears. 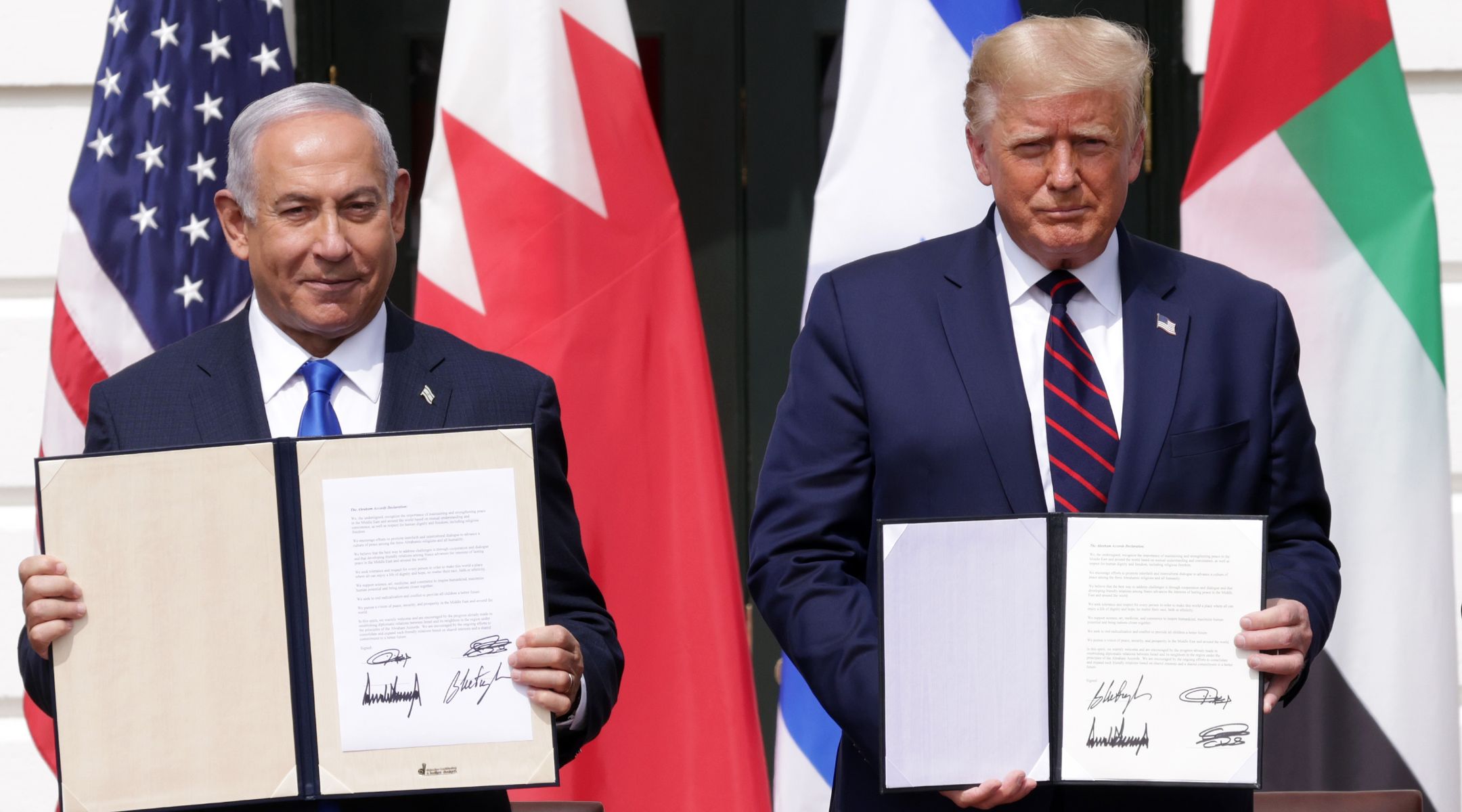 “The Trump-Bibi alliance became the face of the U.S.-Israel relationship, which we said at the time is really bad for Israel,” said Jeremy Ben-Ami, the president of the liberal pro-Israel J Street lobby group.

Dermer, notably, accompanied Trump to Pittsburgh in 2018 after a gunman, spouting a xenophobic conspiracy theory Trump had peddled, murdered 11 Jewish worshipers in the city’s Tree of Life synagogue. Dermer was visible as Trump toured the site of the massacre, which was an odd gesture as the massacre had nothing to do with Israel. But the local Jewish community made it clear they would prefer Trump stay away, and Dermer was a handy Jewish front man for the president.

“There have been a series of actions and circumstances that have used up some of the goodwill between Netanyahu” and Democrats, said Rep. Brad Schneider, a Jewish Democrat who was previously a lay leader at AIPAC and the American Jewish Committee. “I think the way that that [2015] speech came to be, the process wasn’t helpful, it left a lot of hurt feelings.”

Mark Mellman, who heads the Democratic Majority for Israel, a group that backs Democrats who hew to a more traditional pro-Israel line, said his job hasn’t been made easier by the perception that Netanyahu is in the Republicans’ pocket.

“It’s resented deeply by Democrats and it helps to make the issue look partisan,” he said.

It didn’t help, Schneider said, that Dermer — now back in Israel — said in a public address recently that American Jews are “disproportionately” critical of Israel and Christian Evangelicals are more reliable as supporters.

Democrats also watched as Netanyahu, abetted by Trump, foreclosed on what had become Democratic doctrine: a two-state outcome to the Israeli-Palestinian conflict. Netanyahu’s open contemplation last year of annexation of parts of the West Bank shocked even the most pro-Israel Democrats.

There is a cadre of Jewish Democratic congressional staffers who came out of Jewish youth movements and summer camps, and who for years have been among the leading shapers of Middle East policy. They talk among themselves about the optimism they felt during the 1990s, when Israeli-Palestinian peace seemed tangible. Now they feel it is crushed. To them, Netanyahu, who was once admired, has become persona non-grata.

“For decades, Israel wisely cultivated relations with both Democrats and Republicans,” said a Jewish former senior Democratic congressional staffer who asked not to be named to speak candidly. “Bibi broke that tradition and threw his lot in with the Republicans, and permanently undermined the trust of many Democrats on and off the Hill.”