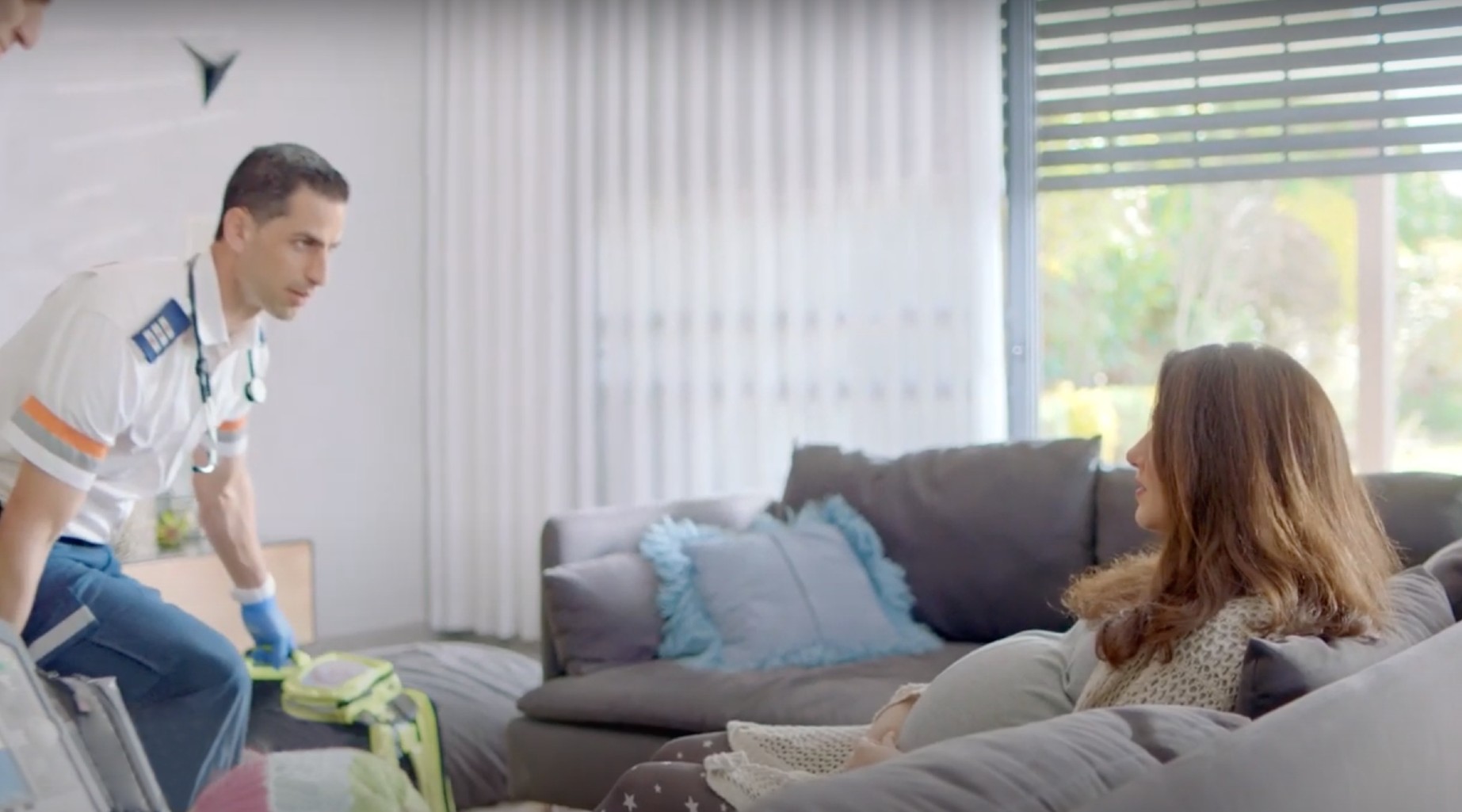 JERUSALEM – The elderly grandmother had a fever and felt weak, despite the antibiotics her family doctor had prescribed a couple of days earlier for a urinary tract infection. Instead of feeling better, she was getting worse.

That’s when her worried family made an urgent call to Magen David Adom – Israel’s national emergency medical service — so she could receive prompt medical attention and be transported to the hospital for treatment.

When MDA’s emergency medical personnel arrived at the woman’s apartment, however, her home became a makeshift medical clinic. One EMT accessed her medical history and the medications she was taking on the tablet he carried. Another checked the woman’s vitals and examined her for obvious signs of pain or infection.

To the surprise of the woman’s family, the first responders then video-chatted with a physician trained to work with MDA paramedics and EMTs. Under the physician’s guidance, they performed a series of tests, including an electrocardiogram and a urine test — the latter to determine whether the patient still had an infection.

Using telemedicine technology, the paramedics transmitted the test results to the doctor. He, along with the first responders, concluded that the woman was in good health overall but that the antibiotic she had been prescribed earlier wasn’t working.

“Instead of ordering her to the hospital, the physician prescribed a stronger antibiotic and sent the order electronically to her local pharmacy for her family to retrieve,” said Anat Gilgal, MDA’s paramedic supervisor for Israel’s central Sharon region. “Furthermore, the woman’s family doctor received all the information we collected during the house call, so he can provide follow-up care.”

Most importantly, Gilgal said, “she was able to stay home, in the comfort of her home, instead of the hospital’s emergency department.”

The encounter is emblematic of a cutting-edge, pilot telemedicine program Magen David Adom launched in October. The Community Medicine Initiative is significantly reducing the number of patients sent to the country’s overcrowded hospital emergency rooms.

In one review of some 1,000 patients who called for an ambulance, 70% were deemed well enough to be treated by health care professionals outside a hospital setting. (As Israel’s national ambulance service, Magen David Adom handles all calls for ambulances received at the national emergency hotline, 101.)

Prior to the pilot program, every one of those patients would have been transported to the hospital unless they refused transport.

The pilot, which is being funded in part by Israel’s Health Ministry, is serving the Yarkon and Sharon regions of central Israel. All the patients are members of Maccabi, the second largest of Israel’s four national HMOs.

Starting in mid-June, Magen David Adom will significantly ratchet up the program, expanding it to Israel’s entire central region and Jerusalem.

“This will free up innumerable hospital beds and ambulances for other Israelis who need them and save the government and health care system millions of shekels,” said MDA’s chief of staff, Uri Shaham. “It will also keep many patients at home where they’re most comfortable recuperating, and ultimately provide better medical care for thousands of Israelis.” 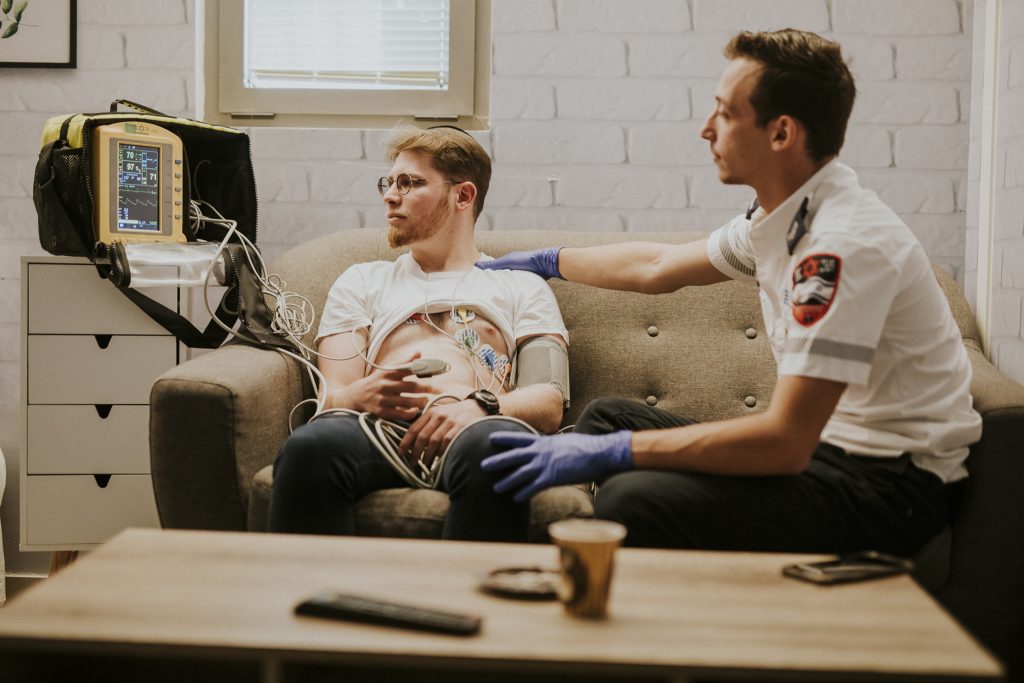 A paramedic with Magen David Adom gives diagnostic treatment to a patient at home. A new program by Israel’s national emergency service uses telemedicine to cut down on hospital visits. (MDA)

The program, which could reduce the number of patients requiring hospitalization by as much as one-third, allows paramedics and EMTs to perform EKGs and test a patient’s blood-oxygen saturation, lung capacity and blood pressure, and to examine the patient’s ear, nose and throat. Once the information is transmitted to a doctor, the on-the-ground team and doctor jointly assess whether the patient should be transported to the hospital by ambulance.

Although MDA came up with the idea several years ago, it was the COVID-19 pandemic that finally convinced the Health Ministry that keeping non-emergency patients at home was better for both the patient and Israel’s overburdened medical system, said Dr. Refael Strugo, MDA’s medical director.

“It’s better medicine,” Strugo said. “If the world was taught anything during COVID, it’s that it is better to treat patients, and especially the elderly, in their home environment.”

“Hospitalization is actually a death penalty for many geriatric patients,” Strugo said. “Therefore, if a patient has a medical problem that can be diagnosed and treated at home, it benefits everyone.”

Israel’s hospitals are notoriously overcrowded. While the population is growing rapidly — now at some 9.3 million citizens — the government’s investments in hospital expansion have failed to keep up.

Health systems all over the world are searching for better ways to provide high-quality medical care while lowering the rate of emergency department visits and hospital admissions.

Strugo attributes the change in part to attitude shifts over the last 10-15 years toward what constitutes an emergency.

“In the past, you dialed 911 [or 101 in Israel] in case of a major trauma or heart attack,” he said. “Nowadays, people dial 911 or 101 for minor problems. We realized that a large percentage of the patients who were taken to the hospital were sent home within a few hours.”

The key to avoiding unnecessary and costly emergency department visits is triage in the field, Gilgal said.

“EMTs and paramedics are already trained to know who in general needs to be evacuated to the hospital quickly and who not, so triage is already an intrinsic part of their job,” she said.

Before taking part in the community medicine program, MDA’s first responders learn how to perform and transmit medical tests, and how to work remotely with physicians.

Dr. Michael Drescher, chief of emergency medicine at Rabin Medical Center in Petach Tikvah and chairman of the Israel Association of Emergency Medicine, called MDA’s community telemedicine program “an extension of the doctor’s ability” to assess a patient.

“It makes good sense. The upside is that patients can be seen more quickly,” he said. “They can stay home if they don’t need to be sent to the hospital. And it’s a way to evacuate them immediately if they need immediate care.”

Given that very few doctors are able to make house calls, Drescher said, it makes sense that they use MDA’s logistical network and the skills of MDA paramedic teams to assess and treat patients at home.

Gilgal said she hopes that the Health Ministry will soon permit MDA first responders to perform blood and enzyme tests at a patient’s home, expanding the burden they can take off doctors and hospitals.

“Having the ability to do blood tests and to test enzymes, especially to detect a heart attack while it’s happening,” Gilgal said, “will be a game changer.”

This article was sponsored by and produced in partnership with American Friends of Magen David Adom (AFMDA), the largest supporter of MDA worldwide. MDA is Israel’s national ambulance, blood-services and disaster-relief organization, as well as Israel’s representative to the International Red Cross. This story was produced by JTA's native content team.